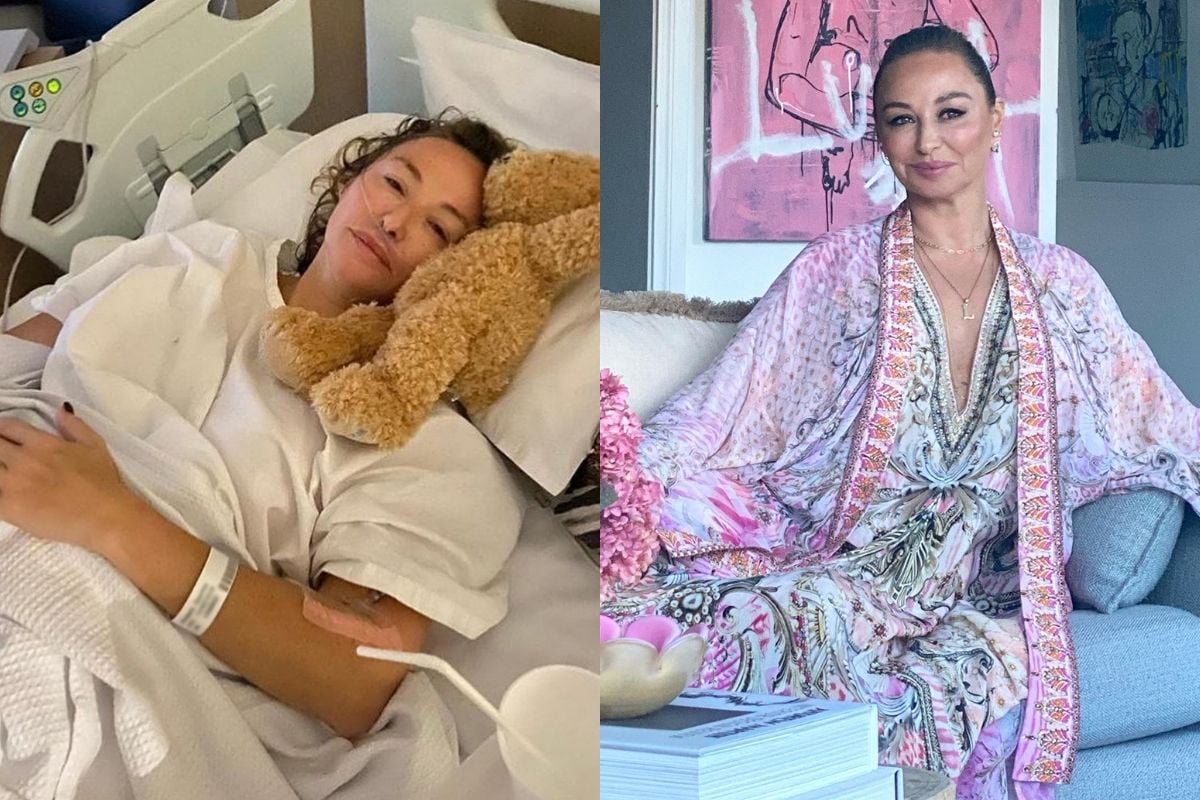 It's 2018, and just months after giving birth to her daughter Luna, Australian fashion designer Camilla Franks finds a lump. It's in her breast.

After first passing it off as mastitis - it turns out to be something more serious. It was stage three breast cancer.

After months of experiencing what she describes as the most "beautiful and free time in her life", Franks said the news of her diagnosis was heartbreaking.

"I had been at my absolute happiest travelling around this great big, beautiful country of ours working on the AUSTRALIA collection with (my fiancé) JP and my baby Luna, who was only three months old," Franks shares with Mamamia.

"Some would say that was a bit crazy in itself, but it was magical. I was breastfeeding, and we were making memories and creating all the gold."

For the new mum of one, her diagnosis would mark the beginning of a long health battle - one that would completely shape the course of her life.

Like anyone who would receive such life-changing news, Franks said she was "shocked, disbelieving, horrified and challenged" on every level.

"In some ways it all became an unreal blur. Like a bad dream that I wished I’d just wake up from, but I didn’t. Once I’d gotten my head, and I guess my heart, around it, I went into battle like a bloody warrior."

Listen: On this episode of No Filter, Mia and Camilla chat about mental health, work life balance, losing her brother, growing her brand, becoming a mum and getting older. Post continues below.

The fashion designer explained that behind the sparkly front of her iconic label, Camilla, she was taking on a very private battle.

"The shock of the diagnosis. The total act of surrendering to the journey. Taking some kind of control when I shaved my hair off before it fell out on its own accord."

"That was a powerful moment which I shared surrounded by my closest friends who were my rocks throughout the journey. I remember thinking, 'I’m bald and broken, but I’m not beaten'."

Franks would go on to endure six gruelling months of intense chemotherapy, a double mastectomy, breast reconstruction, and the removal of her fallopian tubes.

"It was the most challenging year of my life on so many levels - physically, mentally, emotionally and spiritually," she recalls.

"In a sense, it totally recalibrated me. There were bursts of happiness in the darkness. Once I abandoned myself to surrender and acceptance and learning to live with cancer, I gave myself a greater chance of survival."

The designer hopes her honesty and vulnerability to share her story has inspired women to pay attention to their bodies - and fight for them.

"I shared my journey in the hope that I could support and inspire others, but in the end I received so much love back from all the incredible, inspirational women who connected with me."

"Being part of this ‘Booby Club’, sharing our vulnerability really connected so many of us in beautiful and unexpected ways."

"And, of course, my love for Luna and wanting to be there for her, to watch her grow, to mother her in every sense kept me going even when I felt completely helpless and hopeless."

It’s now been a couple of years since Franks' diagnosis - and the experience is one that has permanently changed the way she approaches life.

"I’m feeling really great. I’m in a good place. I am so grateful to be alive. Right now, I’m in the UK with JP and Luna loving family life in the woods of Wales."

"COVID threw up so many challenges including separations and uncertainty. These days, I really just grab life by the throat. The pure joy of travelling again and experiencing things I probably took for granted before the cancer and pandemic has been just really exhilarating. Getting my creative juices and energy flowing is the best feeling."

"It might sound like a cliche, but - LIFE IS A GIFT. That’s probably my biggest take away. Treasure and live every precious moment to the fullest. We never know what’s ahead."

The NBCF has said COVID-19 has had an impact on the disease, forewarning a potential increase in more advanced diagnoses in the coming years and calling for increased funding into more advanced breast cancers.

"It’s an honour to be an ambassador for the National Breast Cancer Foundation," said Franks.

"I know the pain of this beast and I don’t want any woman or girl, including my own daughter, to suffer it. I am driven to raise awareness and funds for research initiatives that will one day eradicate cancer from our world. No victims, no survivors. Just no breast cancer at all."

"I’ve been as honest and raw as I can be in the hope that I can empower others. It’s been a humbling experience, but I also feel a sense of obligation to use my voice and platform to bring about change. As women I think we have a responsibility to future generations."

So - don't put off breast screening. Get seen.

"You don’t have a precious moment to waste or wait. Your own health is so important, but I would ask those who hesitate to think about the impact that losing a loved one to breast cancer would mean. The pain and suffering they would be left with if you’ve left a diagnosis too late."

"We might be avoiding or frightened of receiving that horrible diagnosis, but when faced with the alternative (death), it’s amazing the strength and resilience you find within yourself to fight for yourself and those you love. Leaving isn’t an option."

B
bron_n_m a month ago

Reply
Upvote
I was diagnosed at 33 yrs old, with two young children. I went through 16 rounds of Chemotherapy and 14 rounds of Immunotherapy. I have publicly shared my story through Instagram in the hope to spread awareness of how important it is to know your own body and advocate for your health. I would love for my story to be shared further to contribute to Breast Cancer Awareness.
When you have your health you have everything @bron_just.me
News
General
Opinion
True Crime
Politics
Sport
Explainer
Entertainment
Celebrity
Reality TV
Movies
TV
Books
Rogue
Royal
Lifestyle
Beauty
Fashion
Weddings
Home
Wellness
Health
Fitness
Travel
Food
Parents
Before The Bump
Pregnancy
Baby
Kids
Teens
School
Parent Opinion
Work & Money
Money
Finance
Career
Lady Startup
Relationships
Sex
Dating
Separation
Friendship
Family
Real Life
Couples