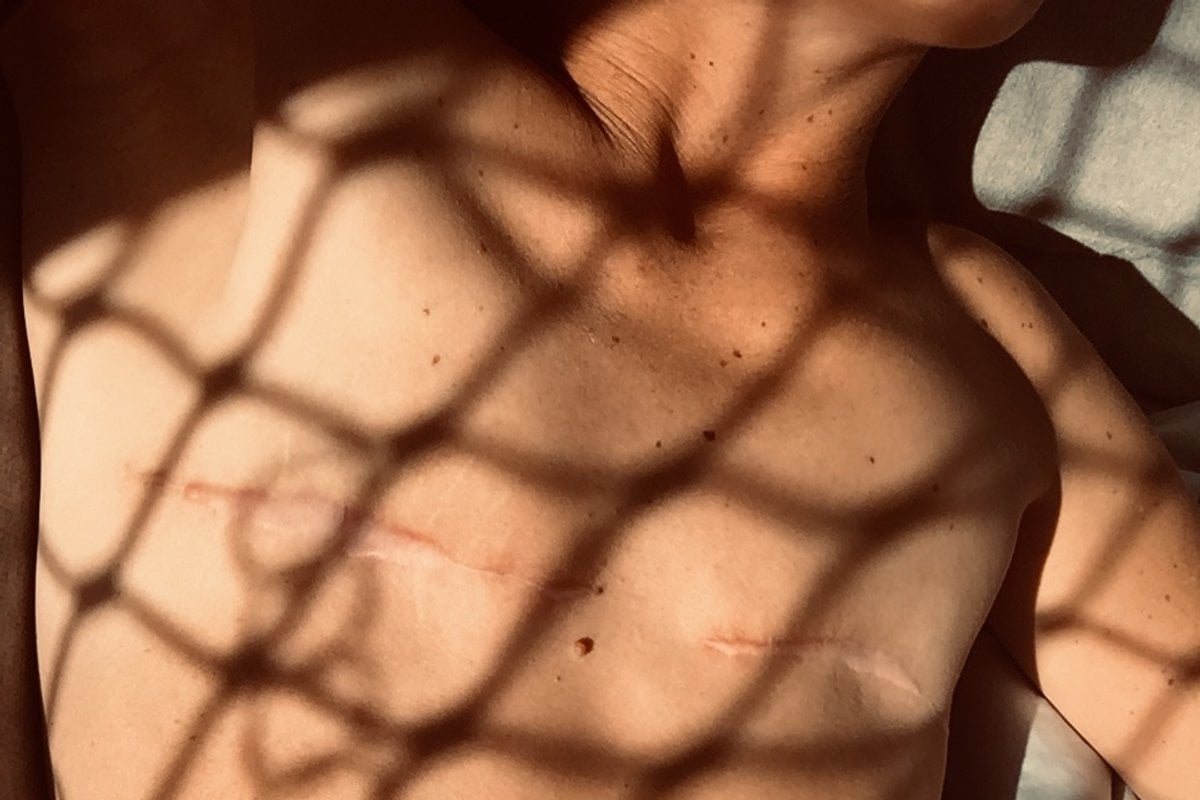 An international film career and Academy Award. A chateau in France and UN ambassadorship. A marriage to Brad Pitt and six adorable children.

Angelina Jolie and I could have so much in common, but the truth is, we share only a predisposition to developing cancer.

I’m Robyn – I'm a 42-year-old mother of three from Canberra. I devastatingly lost both my grandmothers to breast cancer, and my own mother to ovarian cancer. When I learned I carried the BRCA2 gene mutation, which puts carriers at high risk for both cancers, I "did an Angelina" and decided to have a risk-reducing double mastectomy.

Watch: Why you should talk to your family about their health history. Post continues after video.

Ahead of International Flat Day on October 7, I want to share my story with the hope that it may help other women who are navigating the complex and terrifying world of breast surgery.

I also want to be a role model for my young girls who are approaching their teenage years and the social pressures that come with it.

It's a tough decision to chop off your breasts "just in case" you develop cancer in the future. I was a fit and healthy 39-year-old woman. I liked my boobs, and they had served my family well through breastfeeding my three babies, so I visited many surgeons during my decision-making process. All of them recommended various risk-reducing surgeries, including a double mastectomy.

When I was investigating mastectomy options, my surgeon ran through the two reconstruction options that she could perform: breast implants and aesthetic flat closure. She explained the reconstruction decision was my choice, but at the same time, referenced an evidence-based study that showed better mental health outcomes for women who woke up post mastectomy with some form of breast.

In my vulnerable state and desperate search for guidance from my surgeon, I thought breast implants sounded like the way to go.

In February 2019, I had my double mastectomy with immediate reconstruction using implants - crying all the way up until the anaesthetic went in. I took a long time to recover from the surgery, but when I slowly did, I didn't mind my new breasts that no longer required a bra. 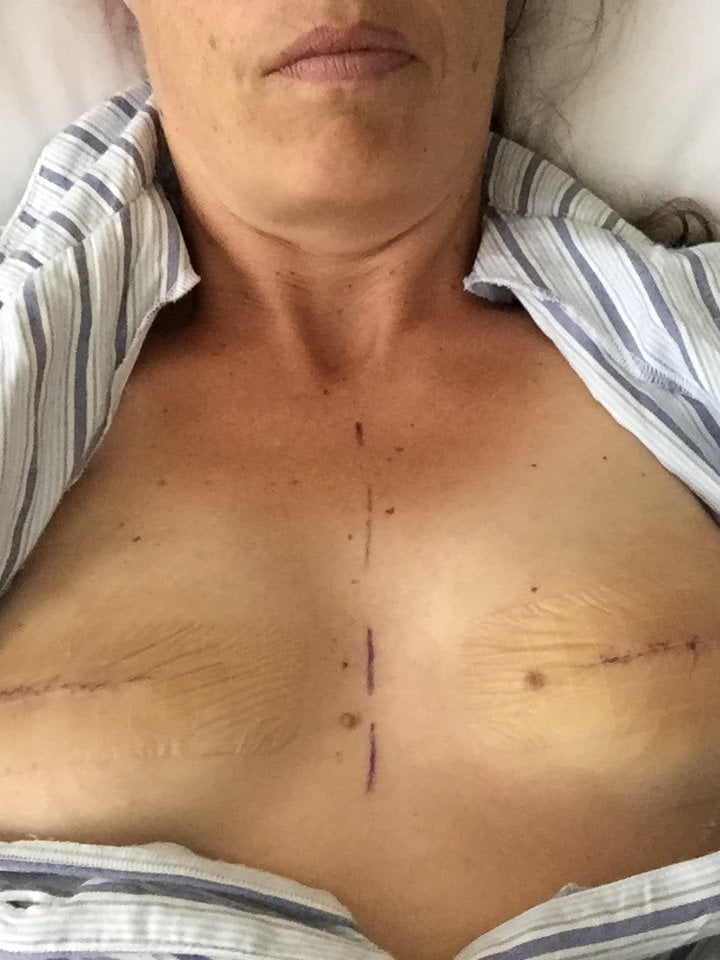 2 days after mastectomy and recon, having not gotten out of bed since surgery. Image: Robyn Smith.

They didn't move much, and weren't much trouble initially. What I didn't know was that my new boobs would be cold, and I hadn't really thought about how I wouldn't have much sensation in them.

After all, 99 per cent of my breasts were now silicone. 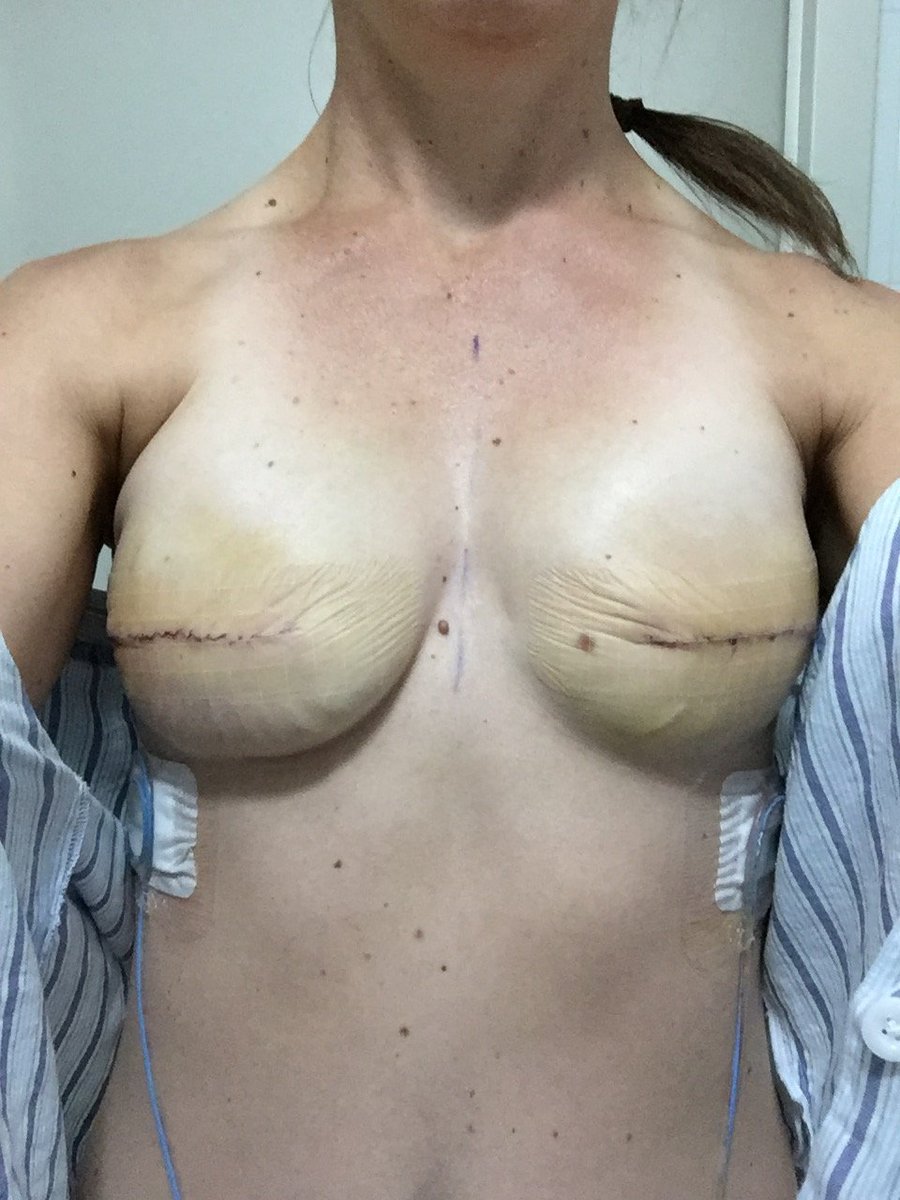 Three days after mastectomy and recon, feeling bruised but happy to be standing up for the first time with my drains in. Image: Robyn Smith.

A few months after surgery, I noticed I was feeling fatigued, experiencing brain fog, and having some short-term memory loss. During the horrendous months that followed, I developed many more symptoms of Breast Implant Illness (BII) which saw my anti-nuclear antibodies go through the roof and my inflammation markers increase.

My hair started to fall out and snap off, and insomnia set in. I was nauseous and had swollen lymph nodes. I also had numbness and tingling in my hands and forearms. All of these symptoms are very common among the many thousands of women who suffer with BII across the world and in Australia.

Yet again I found myself faced with the decision of whether to chop off my breasts or not.

After 13 months of what I now describe as a temporary health crisis, I made the decision to remove my implants and 'go flat'.

I consulted a well-known male surgeon in Sydney about 'ex-planting' – the process of removing implants – and during my most vulnerable time, I was told twice how "aesthetically unpleasing" I would look post-surgery. Not a typo. He actually said that. Twice.

He also told me that the systemic symptoms I'd been experiencing since getting implants were psychosomatic, despite the blood tests showing my rapid decline in health.

Conversely, he concluded by telling me that of the 50-60 patients who had ex-planted through him, 80 per cent of them had their health improve after explant.

After that experience, I decided to go back to my original surgeon for the explant procedure as she had a wonderful manner and I trusted she'd be best placed to reverse her own work. She asked if I wanted her to leave a 'pocket' behind, just in case I changed my mind down the track and sought reconstruction via a different method.

I declined because I didn’t want any more invasive surgeries; I just wanted my previous good health to return. I also put very specific instructions about this on the pre-operative consent form. I knew some women who had agreed to an 'aesthetic flat closure' but instead their surgeons had decided during surgery to leave the excess skin in place and the breast implant fibrous capsule behind in case patients change their mind later.

In April 2020, when COVID-19 was kicking off, I had my breast implants removed and have not looked back. My good health has returned, my blood tests have improved out of sight and I’m confident and very happy I'll never need another major breast surgery again.

What a difference seven months makes without bags of heavy metals on my chest. Image: Robyn Smith.

Today I’m flat. Like a pancake. And proudly flat.

I'm still not sure why I initially thought I needed breast implants. After all, I couldn't feel or see them much, so they didn't really benefit me. Instead, they seemed to be there for everyone else. I'm not sure if my terrible experience with implants has directly impacted my love for being flat, but looking back on it now, I wish I had equally considered all the options for reconstruction, not just those that society and surgeons ushered me towards.

Searching for the term 'flat' on the Breast Cancer Network Australia website reveals only one blog about someone who chose to 'go flat', but the site gives plenty of information about other forms of reconstruction.

A recent study published in the Annals of Surgical Oncology concluded that 'most women satisfied with choice to go flat after mastectomy but choice not supported by many surgeons'.

Why is it so unusual for a person to be OK with being flat? 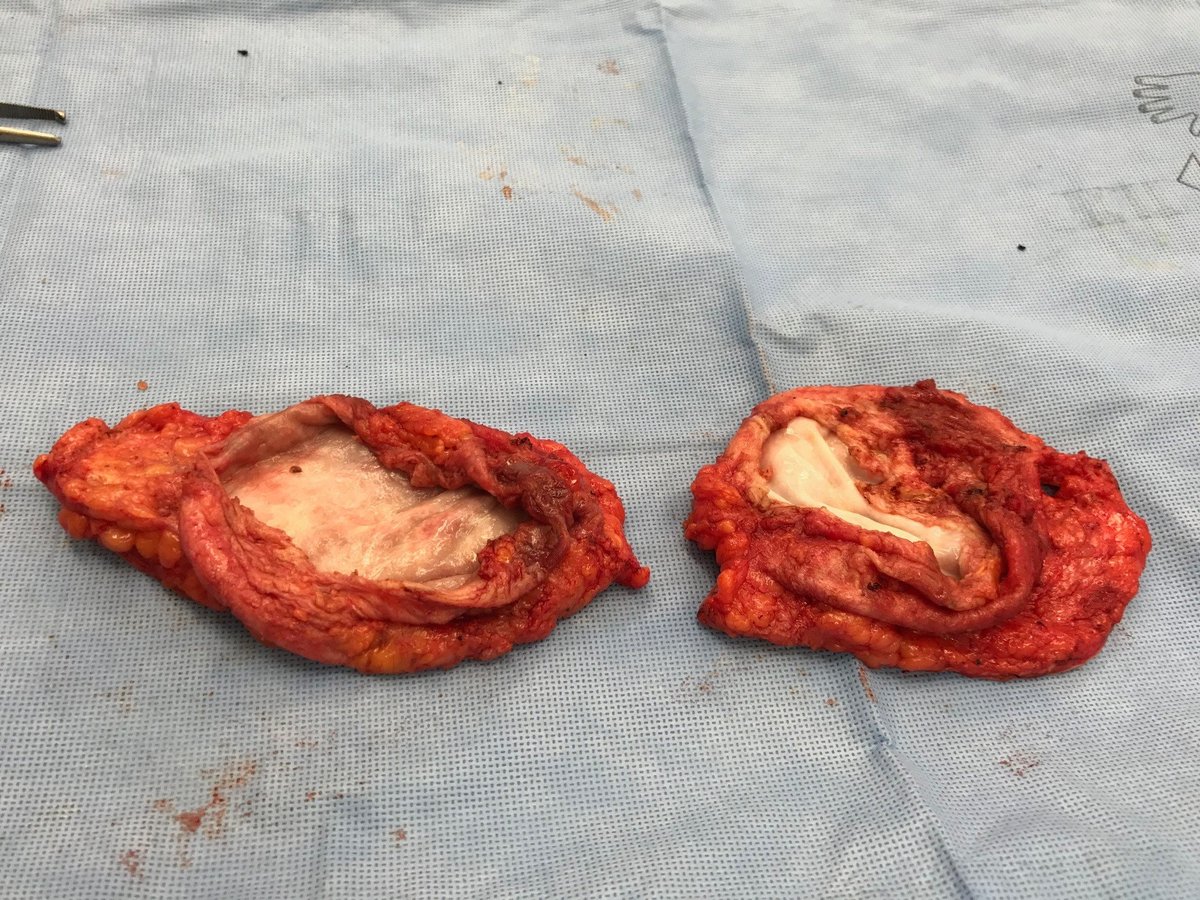 The picture my surgeon took of my fibrous capsules that developed around my implants, during explant surgery in Feb 2020 (everyone develops capsules because it is the body's natural response to the foreign object - to project the rest of the body from it). Image: Robyn Smith.

I'd like surgeons to provide patients with unbiased information and facts about all the options available for reconstruction so patients can make informed decisions about their health. I want surgeons to understand the power of their words when they speak to patients at their most vulnerable.

I didn’t know all the risks and complications of implants, and the adverse events I experienced seem to be a lot more common than the medical community acknowledge.

Patients should be comfortable to give informed, educated consent before they undergo surgery.

Listen to No Filter, where each week, Mia Freedman has candid conversations with interesting people who have fascinating stories to share. Post continues after audio.

In an era where cosmetic surgery and looks are pushed so heavily, I think it's important to know that even without breasts, women (and men) can still be healthy, strong and beautiful.

This International Flat Day, let’s celebrate and normalise being flat!

Reply
Upvote
Thankyou Robyn Smith for sharing your very personal story with regard to what must have been a very hard journey for you. If more women shared their experiences it would help others to make choices without feeling they  had no options. Too much emphasis on what is regarded as being beautiful is published. I found your story very raw and honest.
L
Lfazio 4 months ago