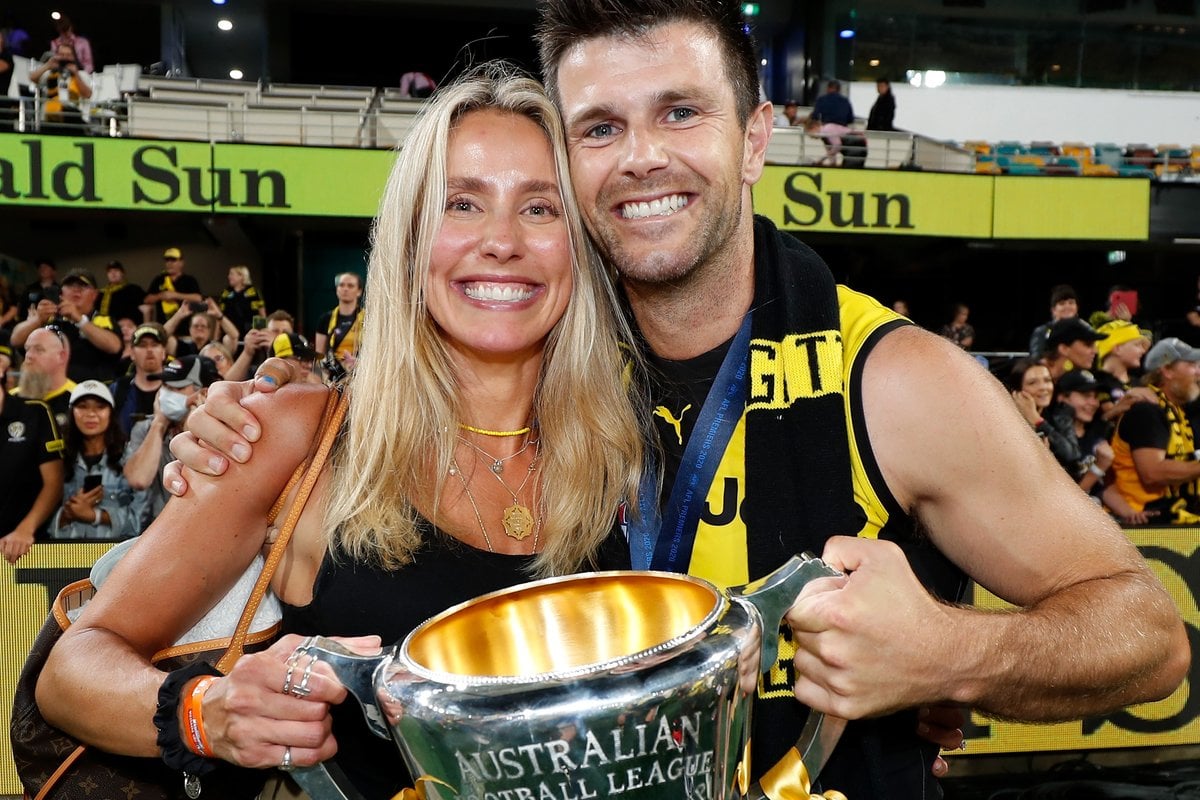 In July last year, in the midst of the pandemic, Brooke Cotchin became engulfed in a media storm that she has now revealed left her suicidal.

The businesswoman and wife of AFL's Richmond captain Trent Cotchin attended a beauty salon to receive a facial whilst in the 'AFL bubble'. She posted about her trip to the spa on social media to support the local business but quickly deleted it after a slew of backlash.

“The most incredible experience today... My skin was in desperate need of some love. I knew I was in the right place as soon as I walked through the doors of Esteem," she captioned the post.

Ms Cotchin says she didn't realise that she had breached the restrictions placed on AFL players and their families who were staying in a 'bubble' in Queensland.

But what was more costly was the impact on Ms Cotchin's mental health.

In an interview with the Curious Conversations podcast, hosted by Tully Humprey and Sarah Pasini, Ms Cotchin said the online bullying and extensive media coverage caused her great depression.

"The reason why I went for a facial was because we’d been up there for a month and I was homeschooling two kids and had Parker," she said, referring to their three children, daughters Harper and Mackenzie and son Parker.

“I was literally fried, my one thing [to relax was] going for a facial or a massage. [Trent's] like, ‘Just go and have some you time’," she recalled.

“So I did and the only reason I posted on social media was because I had one of the best treatments I've had and I wanted to support a business up there because COVID has challenged everyone and I wanted to share it for them because they made me feel amazing," she continued.

Ms Cotchin said people began sending hateful messages, and adds she would not have gone if she knew she was not allowed.

"It was people that obviously had seen it on the news and had no idea who I was, but just attacking me for the opportunity to attack someone."

The mother-of-three said she struggled to get out of bed in the subsequent days and felt suicidal during that time.

"I had various panic attacks and the kids saw that," Ms Cotchin said through tears.

"I kept saying to Trent, the only reason — it sounds extreme — the only reason I didn’t kill myself was because of my kids," Brooke shared, adding the media's treatment of her was particularly to blame for vilifying her.

"I was so mentally depressed because of the messages people were sending me... I suppose you get painted as this person that you’re not and you’ve got no control so you just have to deal with it."

"I wish to apologise for the mistake I have made and I am deeply sorry for any angst that I have created for anyone. It was an honest mistake and one that I am incredibly remorseful for," she shared in a post that received more than 6,000 likes.

"I am the first to admit I am not perfect, and I do make mistakes, this being one that I need to own and learn from... I would never have attended nor posted on my social media if I was clear this was not abiding by AFL protocol."

Ms Cotchin's father, Rick Kennedy, has previously spoken about the controversy in an interview with Triple M last August.

“My own view, and this is not coming from Trent and Brooke ... I think the AFL and Richmond handled it really poorly,” Kennedy said.

"They talk today a big game about supporting women, coming in behind women and promoting women. What they really did is shut her down and didn’t allow her to go public and take responsibility."

You can listen to the full 'Curious Conversations' podcast here.

Reply
Upvote
2 upvotes
The poor woman. I hope she feels better now. I think a lot of people, especially in Melbourne, were feeling particularly stressed and unhappy and projecting this as rage on anyone who seemed to be flouting the rules or even hinting that they were doing it tough. It's no excuse for the unkindness, but it wasn't personal, it was just an unpleasant manifestation of collective grief. People were being unkind and ungenerous in all kinds of settings.

Reply
Upvote
3 upvotes
@gu3st yeah, that bit rubbed me the wrong way too. Let's not exaggerate, she was there for a facial, not a necessary medical procedure. Of course, that in no way means she deserved the abuse she copped.