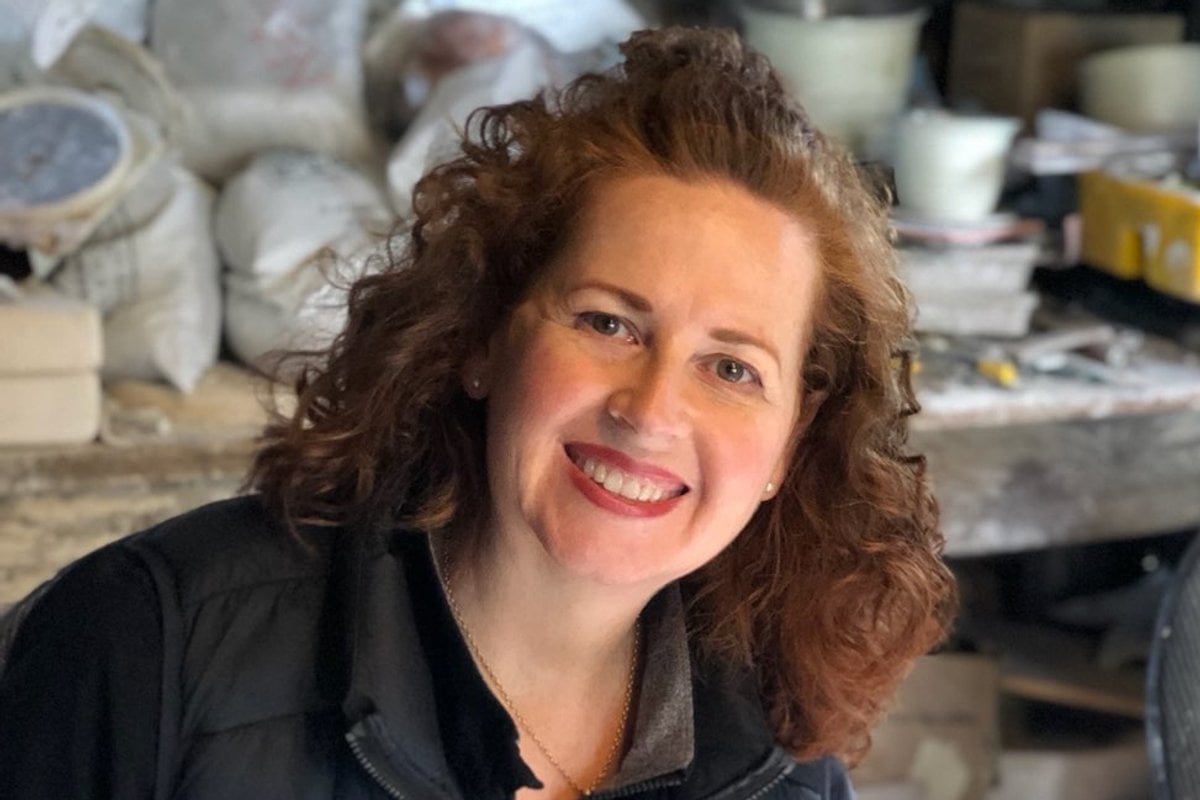 Jacqueline had just returned to Australia after a divorce with little more than her luggage, her dog and $10K of debt. If that wasn't enough, she was diagnosed with cancer, prompting her to move back in with her parents for support.

Here she was, on the brink of turning 50, starting over from scratch.

Although she managed to get a part-time job quickly, she had no idea what to do with the money or how to set herself up for success because she’d never paid much attention to managing the money.

When she was married, she largely left the finances to her husband. It looked like they were doing well with a house and cars, but during the divorce she learned that after all the debt, there wasn't much left.

"Starting over at 50 was scary. I didn’t know what I was doing. I couldn't afford thousands of dollars for a financial advisor, but I knew I needed help if I ever hoped to create some stability for myself," she told Mamamia.

Jacqueline enrolled in Mastering Money, a financial education program that teaches adults practical financial skills to save, invest and manage their money. With the help of the program, Jacqueline turned her life around. In less than nine months, Jacqueline paid off her $10,000 credit card debt and also built up over $10,000 in savings.

Fast-forward another 18 months, Jacqueline was continuing to hit big goals. She remained debt-free, and her newfound saving abilities helped her to buy a new car and a holiday.

Today, Jacqueline feels more financially confident than she ever has in her life.

"It's hard to believe that a few years ago, I didn't know if I could even pay off the debt. I've never felt as in control of my money as I do now. Now, I'm actually excited about my financial future," she says.

Jacqueline shares three money lessons that helped her turn her financial life around:

1. Learn how to track your spending and allocate your income.

"Before doing the program, I didn't have any idea where my money was going. Learning how to put together an expense budget, how to track my spending, and how to organise and allocate my income, was game-changing. It allowed me to feel in control of my money for the first time," Jacqueline says.

Learning these skills enabled Jacqueline to reduce her expenses by hundreds of dollars a month. Reflecting on her journey, she admits she had never been taught how to save, so she didn't previously have the right skills.

"Keeping track of your money is a lot less complicated than I used to believe. Once you know how to do it, it can be really simple and straightforward," she shares.

"In the beginning, I was shocked when I saw how much money I was spending, so it can be confronting but that transparency was crucial in helping me identify opportunities for saving and developing an awareness of my spending habits," Jacqueline continued.

2. Change your mindset to become more open to opportunities.

Jacqueline admits that previously she didn’t have the respect and value for money that she has today. She considers the change in mindset an important factor in helping her achieve her goals.

"A big part of what changed for me through the program was my mindset around money. How I valued money changed. I've never appreciated and respected money as much as I do now," Jacqueline said.

"In turn, that changed how I valued other things in my life. I started valuing frivolous spending a lot less and started noticing little opportunities to save or make extra money a lot more. For example, I'd proactively find second-hand items to sell, and I started collecting all the coins and five-dollar notes. I also started being more open with people in my life about my financial goals and that sometimes led to them giving me tips or opportunities which I wouldn’t have known of before," she shares.

Listen to What The Finance, Mamamia's podcast that's all about money. Post continues after podcast.

3. Don't be too proud or embarrassed to be a beginner and ask questions.

'Is this a silly question?' 'Should I already know this, at my age?' 'Will they judge me for asking this?' These fears often hold people back from asking for the help they need to understand their finances.

While most people shy away from talking about money, getting financially educated gave Jacqueline the confidence to start conversations and ask questions that allowed her to fast-track her progress.

"Everyone has to start somewhere. You can only move forward from where you are. So, I don't let my age hold me back. I knew I needed the help, so I wasn't too proud to sign up for a program, or too embarrassed to ask lots of questions. That's how you learn," Jacqueline said.

She believes this attitude to growth and learning has helped her come as far as she has.

"It can be daunting when you're older, but I’m amazed at the progress I've made in just a few years. It started with a willingness to learn, ask questions, and take one step at a time," Jacqueline said.

Today, Jacqueline is living a financial life she never imagined possible just a few years ago. Now, she wants to inspire other women to know you can turn things around and achieve big goals at any age.

"It might sound cliche, but never give up on your dreams, even if it seems impossible. It takes work, but you just have to take one step at a time, and soon you'll be amazed at how far you’ve come."

SkilledSmart is a financial education platform helping adults learn to save, invest and manage their money. On their website, you can download a free e-book on "5 Money Mistakes Costing You Thousands", and learn more about the  Mastering Money program.