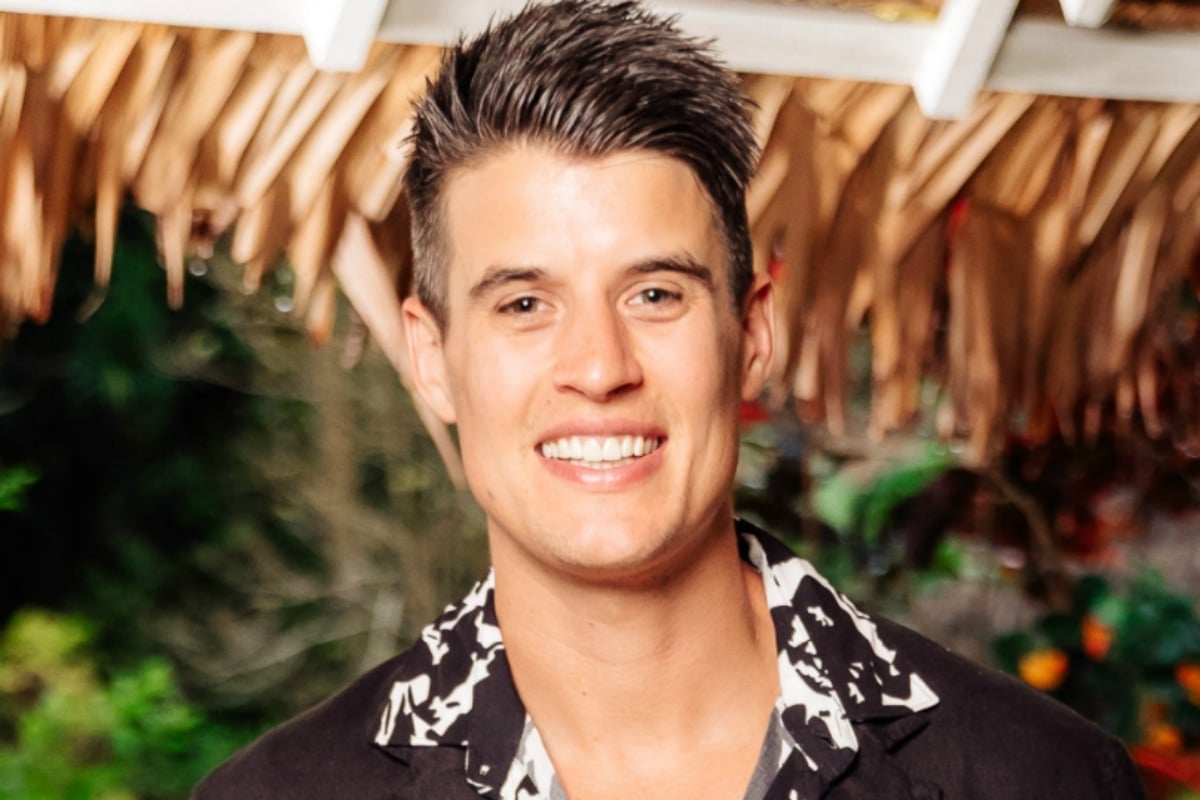 Following his dramatic appearance on Bachelor in Paradise, the backlash levelled at Bill Goldsmith by viewers has been rife.

He’s been described as a snake, a gaslighter, a manipulator and a liar. A dent to his reputation he’s been vocal in addressing on Instagram.

It’s an experience one can imagine would cause a high level of distress, and probably lead to a hefty amount of self-reflection.

So when I was tasked with interviewing the 31-year-old Melbourne plumber today, I had a lot to ask him.

I wanted to give him a chance to explain himself, to see the side of Bill Goldsmith Australia hasn’t seen yet. It is, after all, only through our television screens that we’ve actually met the guy. We should give him a chance, right?

It turns out… we might’ve been right all along.

The former Bachelorette contestant’s most infamous moment in Paradise was his treatment of Florence after their date. She claimed he’d persisted in trying to get her into bed with him – a fact he vehemently denied in an expletive-filled confrontation with her, and then to Alex Nation, who he was beginning to build a solid relationship with.

Watch a snippet of the confrontation below. Post continues after.

“You’re so malicious you f***ing want to make s**t up because I didn’t give you a rose,” Bill yelled at Florence in front of the camera.

“Are you for real? Why would I make that up?” Florence questioned.

“Because you’re malicious and it didn’t go your way,” he responded.

In just a few hours, Bill had abused and undermined Florence to tears, and convinced Alex she, too, was crazy for believing her.

Viewers were quick to call out Bill’s actions as a clear example of gaslighting, a form of manipulation which sees the perpetrator make someone doubt their own sanity.

Naturally, it was the first thing I wanted to talk to Bill about.


Did he understand that gaslighting is a dangerous form of emotional abuse?

Did he feel any remorse watching the show back? Was he horrified he’d been misunderstood by so many?

And had he learnt that normalising this behaviour on mainstream television is not OK?

The short answer: No.

And a very defiant no at that.

Throughout my entire conversation with Bill, it was clear this was a man on the defensive.

From his very first word, I knew he didn’t want to be talking to me. He was terse in tone, sarcastic at times, patronising at others. I was the enemy.

Bill – a man adamant the world is against him – stuck to his guns: Florence was “conniving and strategic” he told me.

And his opinion of her, months later, remains the same.

“I apologised to her on Instagram and in a text but she hasn’t replied… I’m not going to keep apologising to someone who won’t reply.

“She’s responded to some things on Instagram saying she’s still upset by it so, whatever. She has some sort of plan. I just want to get over it.”

Looking back on my time in paradise, I’d like to think I’d handle the same situation a lot differently. I was navigating my way through a range of emotions in an environment like no other on this planet. I’d like to whole heartedly apologise to @florencealexandras for speaking about her like I did, no one deserves that. Every single one of us were in Fiji for our own reasons Whether that was the experience, love, relationships, money, opportunities or business either way, no judgment from me ???????? @bachelorinparadiseau @alexandranation @roqclothing #bacheloretteparty #bachelornation #bachelorinparadiseau #apology #lostmycool #ownit #learnfromit #bebetter #growth #humangrowth #navigating #crazyenvironment

When pressed specifically about the gaslighting viewers have accused him of, he shouted “HA!” before adding:

“I’ve never even heard of that term, gaslighting, that’s been thrown around a lot.

He maintained Florence’s claims about his advances are entirely false. A hint of disdain in his voice at the very mention of her name.

“She was very aware on the date that I had something going on with Alex, that obviously didn’t make the edit. For her to come back and strategically right after the rose ceremony go up to Alex and tell her things to try and get in the way of our relationship… you could see by my reaction I wasn’t very happy,” he said.

“I did not pressure her into sleeping with me, or staying the night… We’re on a TV show where we’re always mic’d, and the cameras are always rolling, so if I did say it I’m sure that would have made the edit, considering how bad the edit was,” he explained, adding with a sarcastic laugh: “You do the maths.”

But he certainly kissed her. Pretty passionately from what we all saw. This is something he sees as “no issue”, considering Alex’s own date with Brooke days prior.

“Alex kissed Brooke. Alex consciously chose Brooke. I got taken out on the date with Flo without any control and yeah, I kissed her. I don’t think that’s an issue,” he said, with a sigh as if to ask,”What exactly is your point?”

Bill’s opinion that he’s simply fallen victim to bad editing is one he mentioned a lot during our chat, and one he’s stuck by on social media – both during this season of Bachelor in Paradise and Ali Oetjen’s season of The Bachelorette.

So I was dying to know what was left on the cutting room floor.

Well… He wouldn’t exactly tell me, apart from maintaining we only saw “about 20 per cent of what happened”.

When the brother fly’s all the way over to Fiji to support you and says he felt like he had to after watching the hometown that was a disaster on @bacheloretteau ???? Onya chuff ???? @bachelorinparadiseau @a_chuffd_life

“I don’t know if I’m allowed to tell ya,” he said, laughing again as though he was sitting on a goldmine.

“I think Channel 10 might be a bit upset if I tell you. They need the drama, they need people on couches to watch it and that’s what they did.”

“I signed up to the possibility to be edited. Obviously when you sign up you hope you’re not edited that way… But I experienced it first hand and yeah, there was some drama, and some sticky situations, but not as much as what comes across on TV,” he added.

“And like, I dunno if you saw it on TV but after me and Flo have that bust up we were amicable with each other… We just had the understanding that like I really don’t respect you, you don’t respect me whatever… let’s just move on.”

It’s here – suggesting that he has no respect for Flo – that made it clear to me that any apology he’d offered her was disingenuous.

I asked him again about the gaslighting.

“But she was being crazy!” he bellowed down the phone, with what I assume was a smile – or smirk.

We moved on from Flo to his relationship with Alex Nation – a relationship he labelled as “the only love story in Fiji”.

But when asked about his romance with the mum-of-one – which broke down just weeks after they both left Fiji together – he was… withholding. And that’s an understatement.

After telling Alex he loved her in the Bachelor in Paradise finale, he changed his mind weeks later and retracted his “I love you”. By then, Alex was closed off from the possibility of pursuing any form of relationship with Bill.

“What happens between me and Alex after the show is mine and Alex’s business, no one else’s. I’m not asking Osher how him and Audrey are going,” he spat at me.

Taken aback by his bizarre comparison, I laughed.

“Yeah we met on a reality TV show,” he added, recognising the irony and pre-empting the obvious retort, “but once the cameras stop rolling it’s just between me and her. I don’t see why Australia needs to know what happened between us… it’s quite ridiculous to be honest.”

On opting not to attend the reunion, he said:

It felt accusatory, but I wasn’t even sure who to anymore.

So why does Bill think he’s gotten such a bad rap after all?

He cares too much.

“In hindsight I should have just been ruthless and not cared about her and gone stiff sh*t you’re not gonna get a rose because it’s not from me.”

So is he… bitter?

“I don’t have any regrets,” he assured me.

“This happened in November last year,” (“Duh” his tone screams), “It’s been six months, I just want to move on with my life.”

For Bill, who continually told me he “just wants to put the experience behind him and go back to being a plumber”, it sure sounded like another shot in the franchise is totally out of the question.

But I asked anyway.

A fitting end to a rollercoaster of an interview.

I really hope I don’t bump into him in a Melbourne dog park one day.