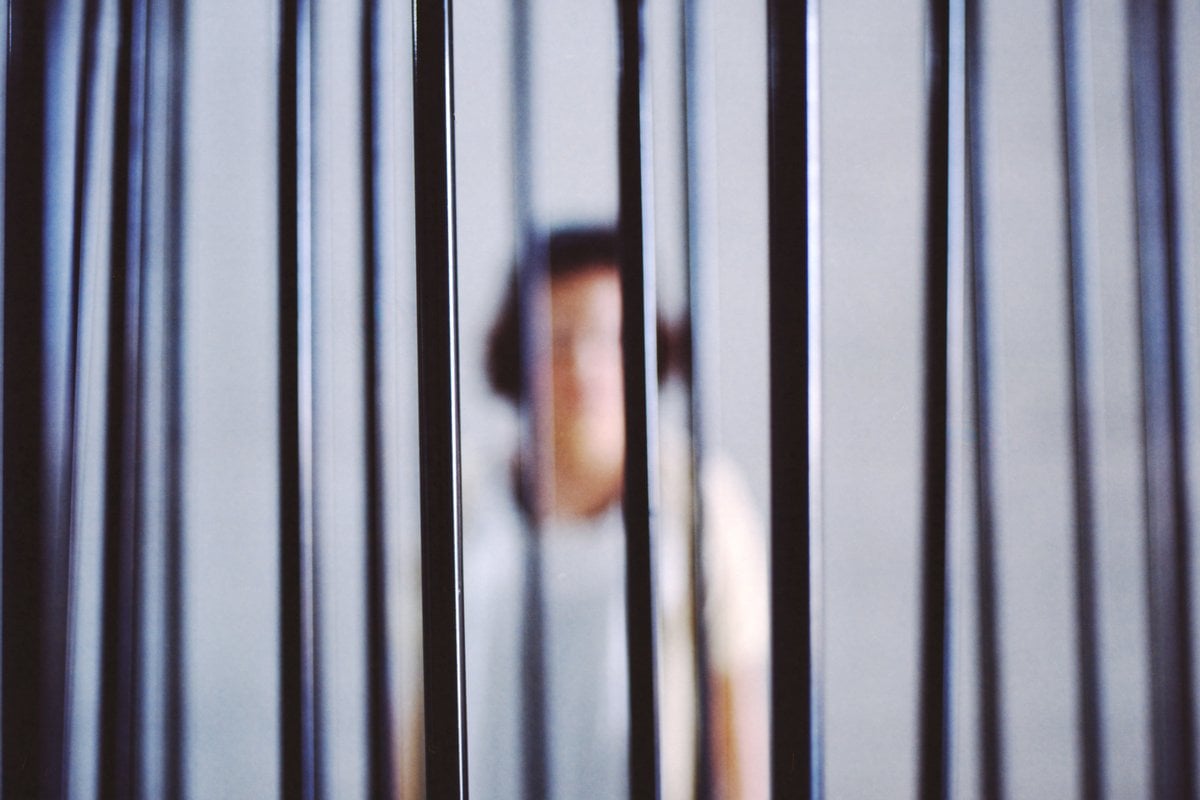 This post deals with sexual assault and domestic violence and may be triggering for some readers.

Those are the words of Annabel Walker, who spoke to Mamamia's No Filter podcast about the reality of life behind bars in Australian prison.

The 32-year-old spent eight months in prison after being found guilty of a string of fraud and deception convictions in September last year.

"The thing that surprised me the most is the grief in there. You can't have put pen to paper about what you've seen and heard in there about people's lives. Like people's parents that shot them up with heroin at 10 years old, been molested, you name it, it has happened," she shared.

"And these women know nothing better. Or they're in there with their mum or their grandma. You know there are generations in prison."

"You see so much loss in there."

Annabel was one of the eight per cent of women that make up the total prison population here in Australia.

While that might not seem a large percentage, more women and girls are finding themselves locked up in prison than ever before.

Between 2009 and 2019, the rate at which women and girls were imprisoned increased by 64 percent. For men it was just 45 percent.

So why are more women and girls going to jail now? Well, research has found that many female prisoners are victims of violence and abuse at the hands of their partners.

In fact, in 2016, a conference held by the National Judicial College of Australia and the ANU College of Law heard that the majority of women in Australia and around the world, have committed minor non-violent offences. Of the women who have committed serious violent crimes, they are almost always against violent partners rather than strangers.

A history of trauma.

According to Silke Meyer, Associate Professor in Criminology and the Deputy Director of the Gender and Family Violence Prevention Centre at Monash University, a lot of crimes against violent partners can be linked to a history of trauma.

"When we look at the female prison population, there's a much greater level of violence against women or violence against girls that often starts in childhood, and is primarily male perpetrated violence," she tells The Quicky, Mamamia's daily news podcast.

"That leads to a trajectory that creates increased risk for offending. Other types of risk factors like dropping out of education and having no employment opportunities, again, often intersect with adult experiences of violence."

Meyer also says drug-related offences have been a key driver for female incarceration in the last couple of decades, at least.

"The other thing when we look at the impact of violence against women more broadly, is that it is often associated with poor mental health outcomes, lower employability, housing instabilities, homelessness. We know that incarcerated women are disproportionately experiencing homelessness and rough sleeping prior to entering prison. So these are all things that intersect with their experiences of victimisation, but they also create an increasing risk for criminal activity."

The misidentification of women as aggressors rather than victims.

Women also tend to be be 'misidentified' as the primary aggressors rather than victims of violence.

"When police get called out, she might be upset and appear to be hysterical. He presents really well, and the police is unsure and either put an order on both people or put an order on her only.

"And because we've called for tougher policies and legislations on dealing with domestic violence offenders, the flip side is that punished women get misidentified. Or in the context where you have women that actually use violence, either because children are at risk, or in retaliation, or in anticipation of more violence being directed at them."

As such, Meyer says we end up criminalising "women for their underlying victimisation".

"I think that's been highly problematic, and which is why we've seen an increasing number of women being incarcerated for domestic violence offences."

In fact, repeated studies have found that at least 85 per cent of women prisoners in Australia are victims of abuse, with most having experienced multiple forms and incidents of violence.

However, some believe this figure could actually be higher, with the Sisters Inside survey finding that 98 per cent of women prisoners in Queensland reported being a past victim of violence.

Last year, 56 women were killed by violence in Australia, despite the federal government announcing $150 million in additional domestic violence funding.

Chief Executive of Women's Safety in New South Wales, Haley Foster, said 2020 will be remembered as the worst year for domestic violence that those working in the sector have ever experienced.

Meyer says change needs to start at a community level to prevent women from ending up in these dangerous and risky positions.

"There needs to be a whole different approach to how we give opportunities for community-led and self-determined ways of prevention. In particular, [more attention is required] on Aboriginal and Torres Strait Islander girls' experiences and life trajectories."

"It's a combination of primary preventions. And I think we see way too little of that because it means a long-term commitment, and most of our interventions are government-cycle focused. People commit to whats in the foreseeable future and the foreseeable financial investment rather than saying, 'okay, it's gonna be a long haul. It's going to be two generations'."

Changes also need to be made once someone has offended.

"Once it comes to offending, there needs to be more therapeutic interventions that are person-centred that look at what the underlying drivers of the offending behaviour are. We need to be asking 'what if we intervened with support?', particularly around mental health and substance misuse."

"Could we interrupt offending trajectories by doing something that is community based, as opposed to saying, 'we need to punish'?"

Reply
Upvote
2 upvotes
'Between 2009 and 2019, the rate at which women and girls were imprisoned increased by 64 percent. For men it was just 45 percent.' - I couldn't find those exact figures, but the ones on Statista say something similar. However, the women's rate increased from 26.5 per 100,000 to 34.9, while the men's went from 336.4 to 409 per 100,000. Just the increase in the men's rate is 2 times the total rate of the women.
'a lot of crimes against violent partners can be linked to a history of trauma' - Is this for everyone, or only for women?
Many of these factors seem to be applicable to everyone, not just women.
G
gu3st a year ago

Reply
Upvote
2 upvotes
Almost no point made in this article isn't true for both genders, not sure why it needed to be gendered, other than this appears on a women's website. While women do face adversity relative to men in many areas of life, it seems to me that this is not really one of those areas.
On average, women are less likely to be found guilty of the same charge than men, and if they are, are more likely to receive a lighter sentence than men facing the same charge.
Let me say just say at the outset, society's response to domestic violence is not adequate to protect victims, who are, for the most part, women. In light of this do you honestly believe that police responding to a domestic complaint are more likely to presume that the aggressor is the woman?
News
General
Opinion
True Crime
Politics
Sport
Explainer
Entertainment
Celebrity
Reality TV
Movies
TV
Books
Rogue
Royal
Lifestyle
Beauty
Fashion
Weddings
Home
Wellness
Health
Fitness
Travel
Food
Parents
Before The Bump
Pregnancy
Baby
Kids
Teens
School
Parent Opinion
Work & Money
Money
Finance
Career
Lady Startup
Relationships
Sex
Dating
Separation
Friendship
Family
Real Life
Couples