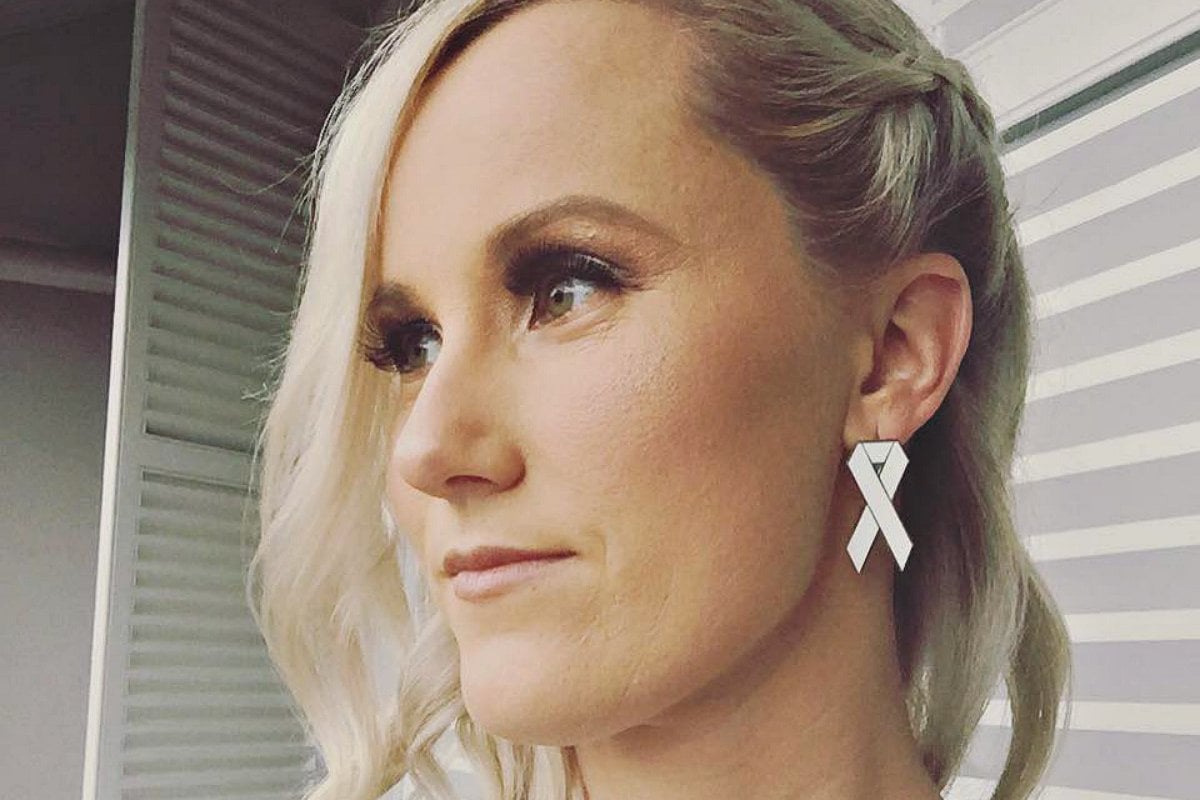 The following contains details of abuse and domestic violence, which may be triggering for some readers.

It was mid 2016 when Angela Jay downloaded the dating app Tinder.

She was 28, recently separated from her husband and living in the NSW mid-north coast town of Port Macquarie where she'd been seconded as a junior doctor.

"I was in a new town feeling quite lonely away from my family. And I was really trying to push myself that it was time to get out there again and to open up my heart to a new relationship," she told Mamamia's True Crime Conversations podcast.

Watch: Violence against women, the hidden numbers. Post continues below.

Among the people Angela matched with was 36-year-old Paul Lambert, a conventionally handsome man with dark hair, a strong jaw and a dimpled cheek.

Lambert struck her as funny, intelligent and deep; someone capable of having conversations of substance. After getting to know each other virtually, they arranged a date.

"He actually flew up to see me from Sydney, and we went to a restaurant in Port Macquarie and had a nice dinner," she said. "There was live music, [we] had a few drinks and really just talked nonstop for a couple hours... As far as first dates go, it didn't feel awkward at all. It just felt really right."

Less than three months later, Paul Lambert was shot dead by police after ambushing and attacking Angela in her home.

This is what she wants people to know about her story.

"This was my worst fear, and it was actually happening."

The beginning of Angela's long-distance relationship with Paul Lambert was an intense whirlwind of grand gestures and gifts. He'd send flowers. Pay her tolls. When he knew she was travelling for work, he'd call ahead and pay for a room upgrade.

"At the time, I was just really flattered. I had butterflies thinking about him. It was all very exciting. And it felt really great to feel a romantic connection to someone again, after I had my heartbroken when my marriage fell apart," she said.

It was the beginning of Lambert's campaign of coercive control, a form of domestic abuse in which a person seeks total dominance over another. It typically involves a pattern of escalating psychologically, financially, sexually and physically abusive behaviours designed to manipulate, intimidate and trap the victim.

Within weeks, Lambert's intense behaviour overwhelmed Angela. Her butterflies were replaced by unease at how quickly he wanted the relationship to progress.

She ended things. But his campaign continued.

He manipulated her with threats of suicide if she didn't come back to him. He then began stalking her, hounding her with phone calls and sending threatening messages in which he said he had stolen keys to her apartment.

Police filed a domestic violence restraining order on Angela's behalf, and she sought shelter with a cousin who lived nearby. She also made neighbours aware of the situation.

"Because I'd blocked his number and social media and I hadn't heard anything more from police, I kind of assumed that everything was taken care of, and that he probably would just be moving on and I was just being a bit overly paranoid," she said.

But when she ducked home to get clean clothes on November 3, he was waiting.

This is what happened, in her words...

"In the week leading up to [the attack], I was in a bit of a habit that anytime I did duck home quickly, I would do a full sweep of the house and check behind every nook and cranny. I had hidden a few knives in my bedside table, and I had asked my landlord to change the locks. But in the meantime, I'd removed a few door handles... I felt it made me feel safer.

She made herself some dinner and watched television.

"And then it was starting to get dark. So I figured I should probably go grab the things I came here to get and walked to the back of the house where my bedroom was. And that's when he jumped out for one of my closets and restrained me.

"My initial thought when he jumped out was, 'Oh my God, I wasn't crazy — he's actually come for me. This was my worst fear, and it's actually happening.' It really felt surreal."

During the attack, Lambert stabbed Angela 11 times and doused her with petrol. She ultimately managed to wrestle free and run to her neighbour's for safety.

Even when there are physical scars to see, it's the scars you can't that hurt the most. A year ago today my life changed forever. I narrowly escaped murder, and a part of me definitely died that day. I think about the terror I felt every day... Sometimes it's a brief thought when my scars ache or burn, and other days the memory incessantly haunts me. I'm so thankful to be here today, and even more grateful to my family, friends and colleagues who have supported me over the last year, and continue to give me strength as I struggle along 💜 #survivor #lifeaftertrauma #ptsdrecovery #breakthesilence @whiteribbonaust

Lambert fled north in his car, but was shot three times after a road pursuit ended in a six-minute standoff with police.

"I still feel horrible saying it, but I just was so relieved," she said. "So many people don't have that luxury, that they can start the recovery, knowing that they can't be hurt again by that person."

It was later discovered Lambert had a lengthy history of offending.

Earlier in 2016, he'd been convicted of assaulting his ex wife in Queensland and was on parole. He'd also previously been deported from the USA for stalking and threatening a TV presenter, and between March 2003 and October 2016 was the subject of 10 interim or full apprehended domestic violence orders in relation to five women. He'd been convicted of breaching domestic violence orders three times.

Angela has since become a vocal advocate for domestic violence awareness and women's safety.

"The biggest thing I want [domestic violence survivors] to understand is... if you ever experience violence, in any way, it's not your fault," she said.

"I really felt like 'I got myself into this mess, and it's my responsibility to get myself out.' And that is not the case. If you find yourself feeling uncomfortable about something, it's not because you're an idiot, it's because someone's been very good at controlling you. And it's okay to ask for help."

While Angela is still working through the trauma and sometimes struggles to make eye contact with men, she's found love with one who makes her feel safe — a fellow doctor to whom she's now engaged.

"We literally met in the corridors in the hospital, when we were both working in Coffs Harbour. It was just lucky that there was a group of us that all hung out socially after work, so we became friends first and then from there it turned into a relationship," she said.

"Honestly, I have so much respect for anyone who has been through a violent relationship and finds love again, because it is tough. But I'm really happy now. And I know that it gives other people hope to hear there's a light at the end of the tunnel. I guess it is possible."

If this post brings up any issues for you, or if you just feel like you need to speak to someone, please call 1800 RESPECT (1800 737 732). It doesn’t matter where you live, they will take your call and, if need be, refer you to a service closer to home.

Reply
Upvote
2 upvotes
Another story where we hear of a violent man with a string of previous offences. AVOs are only going to do so much, I want to know what other assistance is there - not for the victims, but for the offenders. Why is there not mandated anger management or therapy of some kind, is there some sort of rehab for guys like this? An AVO is just a band aid if nothing is done to deal with the anger, entitlement and lack of control from the offender.
M
maya a year ago

Reply
Upvote
1 upvotes
@rush exactly!  And precisely what do these offenders have to do before they are off the streets and in jail?  It appears they can continually offend and get away with it.  Until this changes, the murder of women in this country will never stop.
A
ak87 a year ago

Reply
Upvote
2 upvotes
@rush my offender had to do compulsory DV education. At sentencing he still didn’t think he had done anything wrong and blamed me for what HE did. I am certain the education would have been pointless with him. Unless the offender understands and takes responsibility for their actions, no amount of anything will make a difference. He still lives in my neighbourhood and over two and a half years later I still struggle with the aftermath and am triggered if I even drive past him.
A
ak87 a year ago

Reply
Upvote
1 upvotes
@maya I was seconds away from death and my offender still only got a good behaviour order and ‘DV education’ and I have a DVO I can renew every 2 years. I had an incident where he inadvertently threatened me with his car and do you know what the police told me? “He didn’t verbally threaten you and he didn’t follow you so there is nothing we can do”. What was the point of me reliving the hell he put me through when I testified, then again the ongoing hell I went through after that reliving it in my victim impact statement, only to be told when an incident occurred, with witnesses, there’s nothing that can be done?
News
General
Opinion
True Crime
Politics
Sport
Explainer
Entertainment
Celebrity
Reality TV
Movies
TV
Books
Rogue
Royal
Lifestyle
Beauty
Fashion
Weddings
Home
Wellness
Health
Fitness
Travel
Food
Parents
Before The Bump
Pregnancy
Baby
Kids
Teens
School
Parent Opinion
Work & Money
Money
Finance
Career
Lady Startup
Relationships
Sex
Dating
Separation
Friendship
Family
Real Life
Couples