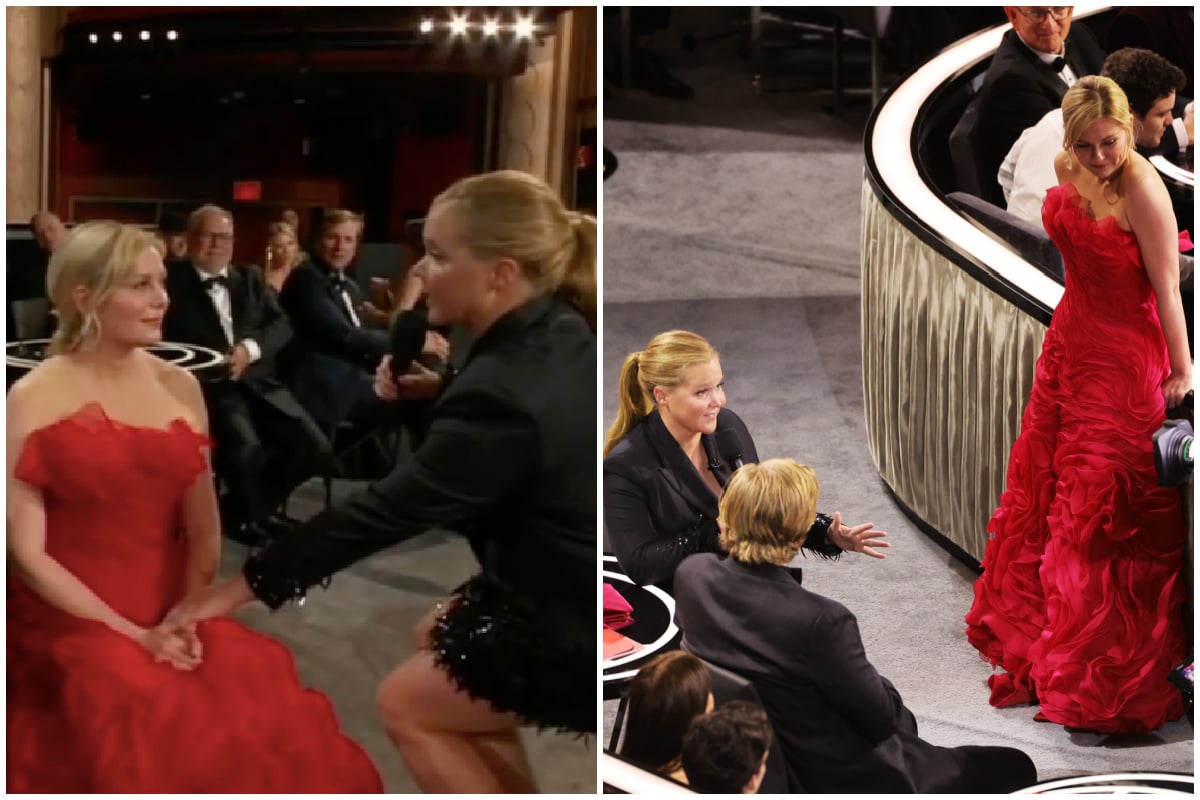 At the 2022 Oscars, a man stood on stage and told a below-the-belt joke about a woman's alopecia.

Then another man stood up from his seat and slapped that man in the face.

But according to some, the real villain of the night wasn't either of them. Not the one who used a medical condition as a punchline, and not the one who reacted with physical assault on live, prime time, international television.

No. If you want to talk about bad behaviour, apparently you need to look no further than Amy Schumer.

The 40-year-old comedian co-hosted the Oscars, with jokes about how hiring three women to host the show was probably cheaper than hiring one man, the fact we now have a movie about the Williams sisters'... dad, and the awkward moment where she was fairly certain she "missed something".

But it was a bit about Kirsten Dunst that led some Twitter commentators to argue Schumer had displayed "the most offensive behaviour out of anyone" at the 94th Academy Awards.

During the show, Schumer approached Dunst who was sitting beside her partner and Power of the Dog co-star, Jesse Plemons.

Schumer began by explaining that it takes nearly 3,000 people to put on the Oscars, and every job is important, giving a special shout out to the 'seat fillers' - volunteers whose purpose is to fill out the theatre when the camera pans the audience.

"Here’s a seat filler," she said, gesturing towards Oscar nominee Kirsten Dunst. "Honey, do you want to go to the bathroom?"

Schumer then took Dunst by the wrist to lead her out of her seat and sat down opposite Plemons. Gushing over the actor, she said she was a huge fan, before Plemons responded, "you know that was my wife?"

Nevermind the fact that Kirsten Dunst is an incredibly recognisable actor, who has been a fixture in Hollywood since she was a child. Nevermind her ubiquity as a pop culture icon, after starring in cult films like Drop Dead Gorgeous, Bring It On, Spider-Man and Mona Lisa Smile. Nevermind that. Because a loud group on the internet had decided:

a) Schumer, a professional comedian, wasn't joking, and

b) Dunst was genuinely offended.

"Amy Schumer of all people calling Kristen (sic) Dunst a seat filler when nobody’s heard of her since 2015….." one person tweeted.

Another posted the video of Will Smith slapping Chris Rock with the comment, "What Kristen (sic) Dunst should’ve done to Amy Schumer".

amy schumer calling kirsten dunst a seat filler when this is her filmography #Oscars pic.twitter.com/r8fVyyJgx2

"Will Smith this, Will Smith that. Can we start hating on Amy Schumer pretty please!?!? Openly hitting on Kirsten Dunst's husband right in front of her face and making her get out of her deserved chair to do it. Chris Rock wasn’t the only person who should’ve got slapped," another posted.

this is going down as another chapter of how bad hollywood mistreated kirsten dunst pic.twitter.com/LOF4jh2JHI

Now. Any performer - particularly any comedian - knows there are always going to be people who don't 'get' the joke. Who mistakenly or wilfully misinterpret it and decide they're not a fan of your brand of humour. That's fine.

But the outrage about Schumer's perceived disrespect towards Kirsten Dunst became so loud that the comedian felt the need to publicly address it.

In an Instagram story on Monday, Schumer wrote: "Hey I appreciate the love for Kirsten Dunst. I love her too! That was a choreographed bit she was in on. Wouldn’t disrespect that queen like that." 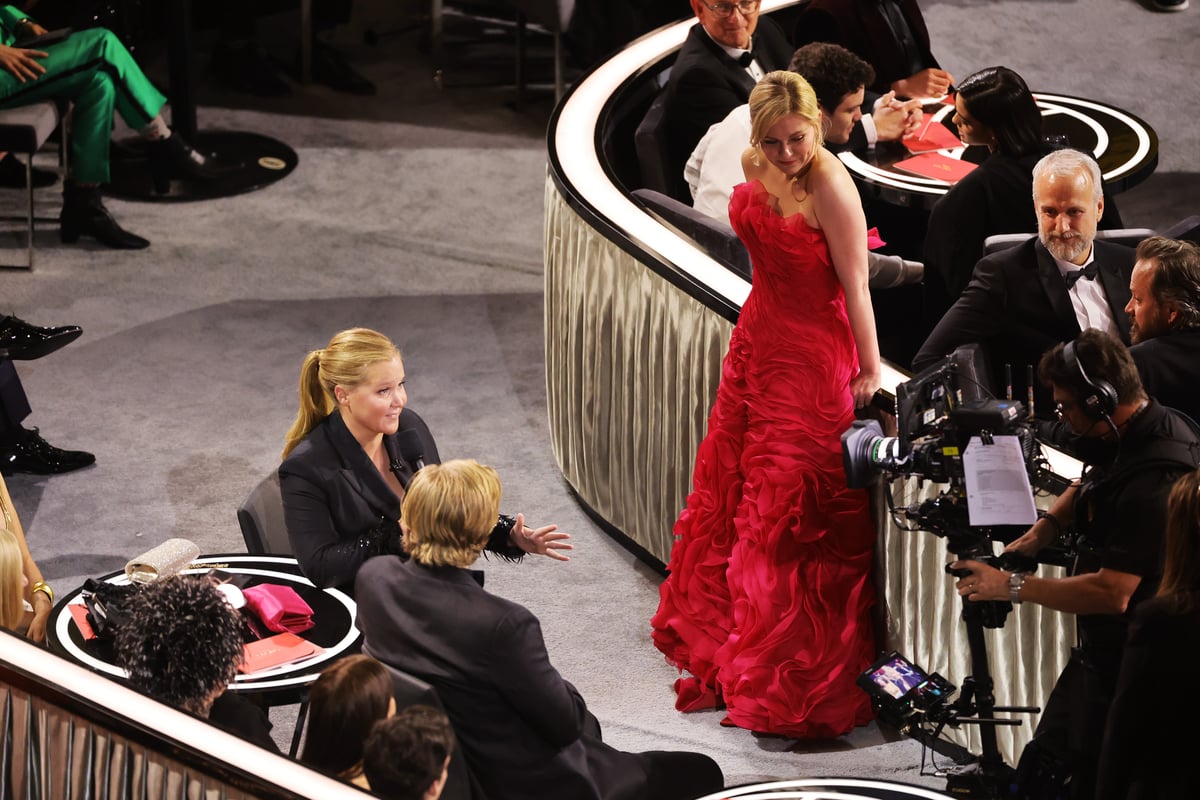 One explanation is that Dunst has spoken previously about feeling ignored by Hollywood.

In a 2019 interview, Dunst said she's "never been recognised in my industry".

"I’ve never been nominated for anything," she told interviewer Larry Flick. "Maybe like twice for a Golden Globe when I was little and one for Fargo. Maybe they just think I’m the girl from Bring It On."

If feeling unrecognised by her peers is a challenge for Dunst, was a joke about her being a 'seat-filler' in poor taste?

Or was that the joke? Was the bit itself a comment on Dunst being shunned by her industry, to the point where the host of an awards night wouldn't even recognise her when she's nominated for one?

But perhaps Schumer was never going to get through the night unscathed.

Viewers have also called her out for an "incest joke" - where she referenced the couples in the room: Jada and Will Smith, Penelope and Javier Bardem, Maggie and Jake Gyllenhaal - the last of which are obviously siblings. But is that an 'incest' joke? Or is that Schumer's schtick? Ironically feigning ignorance to deliver a punchline?

That Amy Schumer could possibly be the villain of an evening where one man joked about a woman being bald, and another man slapped him for it, seems utterly bizarre. But such is the illogical nature of the internet's outrage cycle. We have award shows commentated by faceless people on Twitter, who seem determined to infer meanness from Schumer's comedy. To separate her jokes entirely from their context and then crucify her for them.

But the anger towards Schumer points to a broader phenomenon: we assume maliciousness from women, particularly towards other women. We also assume women can't laugh at themselves.

Both these assumptions are false.

Let women be funny. And let them make fun of themselves. Because humour is one of our best defence's against shame, and women are entitled to that, too.

For more from Clare Stephens you can follow her on Instagram. You can also listen to her comedy podcast, Cancelled, on  Apple podcasts or Spotify.

Reply
Upvote
Incest joke? Only if you're reallllly stretching for something to be upset about. The joke is literally just that they have the last name so they sound like a couple.
Z
zaky 2 months ago

Reply
Upvote
1 upvotes
I am not surprised that some do not get Amy Schumer’s humour, there have always been complaints that she’s too crude, too sexist, too feminist/not feminist enough, too ditzy, too cruel, too sexy, too daggy etc. the standard placed on her and other female comedians are unreasonable.  The Kirsten Dunst snub WAS the joke people! She was having a go at the industry for ignoring her! I thought it was hilarious, typical Amy Schumer just as the “incest’ joke was a joke about her being an ignorant presenter. I chuckled and the audience laughed. The keyboard perpetually offended should chill out.
News
General
Opinion
True Crime
Politics
Sport
Explainer
Entertainment
Celebrity
Reality TV
Movies
TV
Books
Rogue
Royal
Lifestyle
Beauty
Fashion
Weddings
Home
Wellness
Health
Fitness
Travel
Food
Parents
Before The Bump
Pregnancy
Baby
Kids
Teens
School
Parent Opinion
Work & Money
Money
Finance
Career
Lady Startup
Relationships
Sex
Dating
Separation
Friendship
Family
Real Life
Couples