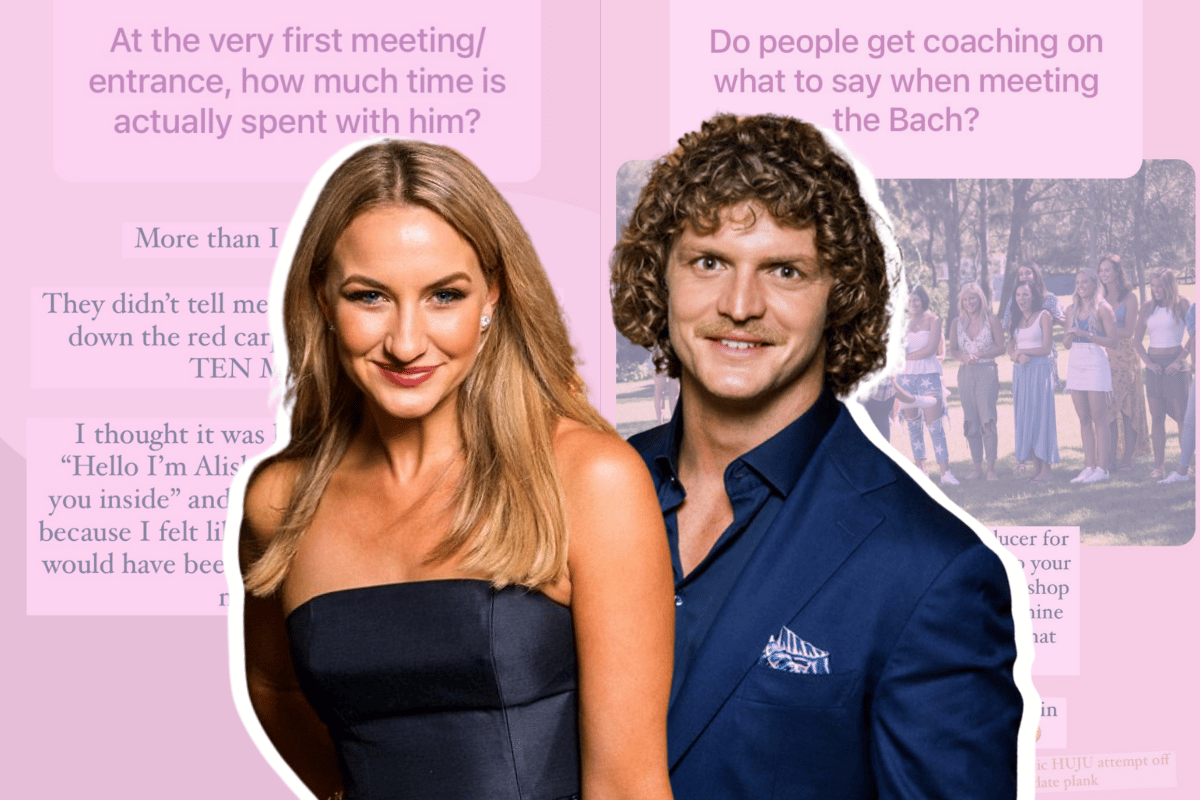 The roses are ready, Osher's suit has been steamed, and the bathtubs are on standby.

It can only mean one thing. The new season of The Bachelor is officially here, people.

After months of waiting, we'll finally get to meet the 23 women vying for Jimmy Nicholson's heart when the show kicks off tonight.

But while we're very excited to see what goes down on the red carpet, it turns out the first night isn't exactly like what we see on TV.

Watch the trailer for the new season of The Bachelor. Post continues below.

In a recent Instagram Q&A, Alisha Aitken-Radburn, who appeared on the Honey Badger's season of The Bachelor and Bachelor in Paradise, spilled all the tea about what really goes down behind the scenes.

From what the first meeting is really like to what happens with the cheese platters (answer: they eat them on BIP), Alisha shared all the juicy details about what the first night is actually like for the contestants.

Here's what we learnt.

Do the contestants audition for the show or are they head-hunted?

First things first, Alisha said pretty much everyone has to go through the audition process before they rock up on the red carpet.

"In my season I'm 98 per cent sure we all auditioned. I've heard headhunting is more prevalent in Married At First Sight and I know it happens more often for the boys," she wrote.

However, her boyfriend Glenn Smith, who she met on Bachelor in Paradise, was actually approached in his DMs.

Do contestants get to choose their own outfit?

Alisha said contestants do get a say about what they wear, but they have to make a bloody quick decision.

"It's really down to how efficient and assertive you were I think," she wrote.

"I walked into wardrobe and I knew I had about 10 minutes-ish and I just said to the amazing stylists, 'Okay, we're going to do Say Yes to the Dress' because I knew I needed to feel confident."

Alisha shared that she tried on eight or nine dresses before she found the one.

Do the contestants know who the Bachelor is before they meet him?

Alisha said that former Bachelor Matt Agnew and our current Bachelor Jimmy were kept under wraps until the first night.

But it was different in the Honey Badger's season.

"Honey Badger was dropped to the papers before we flew out... I was pretty sure it was going to be Badger on the red carpet," she explained.

Listen to The Spill, Mamamia's daily entertainment podcast. In this episode, co-hosts Kee Reece and Laura Brodnik chat to the Bachelor himself about the new season. Post continues below.

It turns out the cute two minute meet and greet we watch on TV is actually way longer (and more nerve-wracking) in real life.

"They didn't tell me until just before I went down the red carpet that I would have TEN MINUTES," Alisha wrote, adding that it was much more time than she was expecting.

"I thought it was how it looked on TV – 'Hello, I'm Alisha, nice to meet you, see you inside' – and that spooked me so much because I felt like I had to fill time, when it would have been really fine if I just said a normal hello."

She also said that contestants get help from the producers before the first meeting.

"It's very nerve-wracking so your producer will practice and workshop your entrance with you," she wrote.

"I had mine scripted fully in a book. I was that nervous." 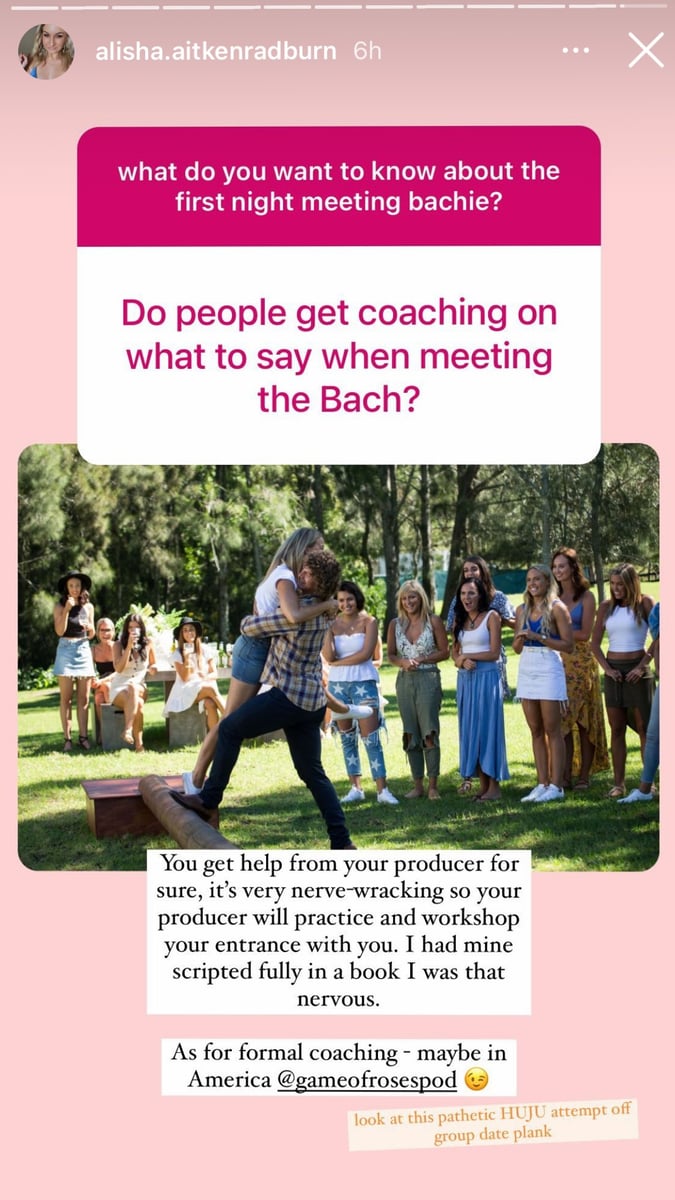 Oh, and those moments where contestants sing or dance in front of the Bachelor are genuine too.

Alisha explained that contestants workshop ideas with producers to plan an entrance that captures their personality.

"Obviously they're keen on the novelty-ish ones because they're entertaining," she added.

In fact, Alisha's producer wanted her to put a piece of duct tape over Nick Cummins' mouth and just stare at him for a few minutes to capture that she worked in politics.

Former Bachelor Matty J has also spilled the tea about what it's like being on the other side of things.

Speaking on Nova 96.9’s Matt, Sarah & Matty J in 2019, he explained that he roughly got around five minutes to talk to each contestant.

"The thing is it’s a bit like a job interview where, if you are going and applying for a job you are extremely nervous, but if you are interviewing people for a position you don’t care really, you are not that fussed," he said.

"You normally do three girls, then you might get a bathroom break, bit of water, freshen up, grab a mint, back in for more."