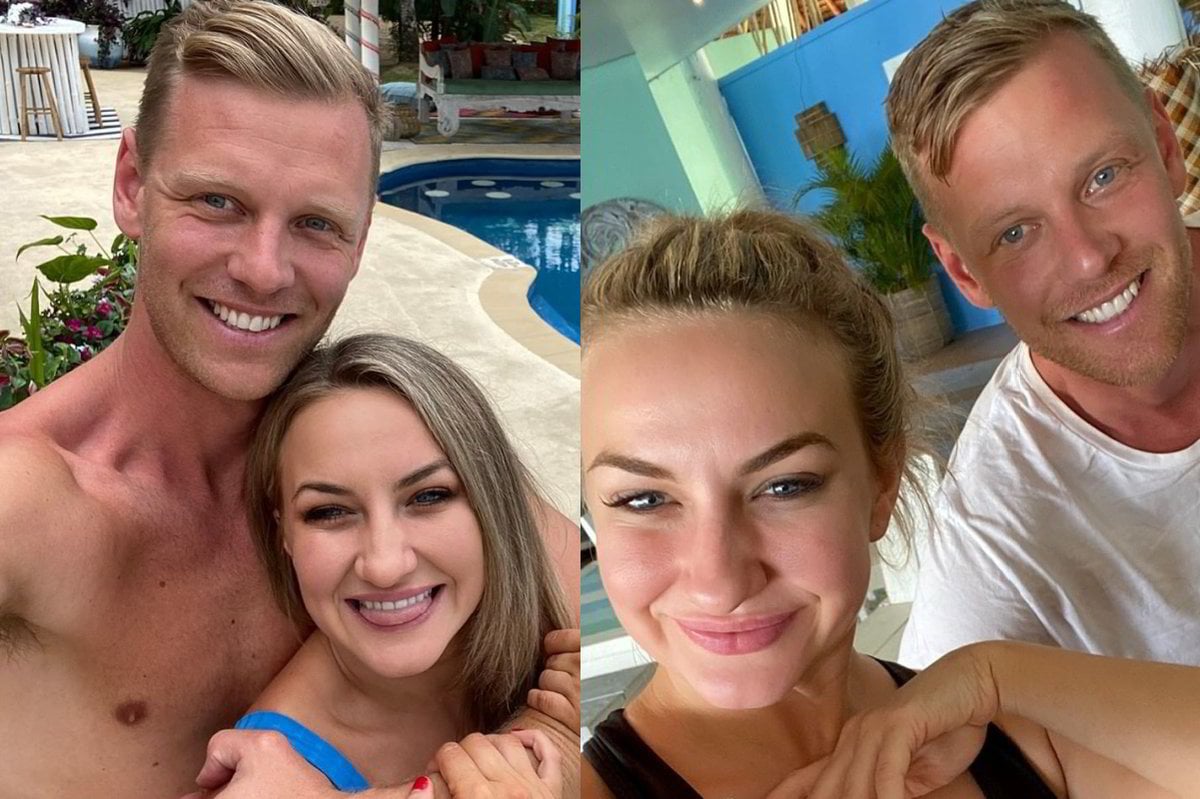 Bachelor in Paradise is not exactly the place for slow burning relationship.

Hard and fast is the name of the game, with feelings heightened in a Fijian resort where the only topic of interest is finding love with another member of the Bachelor alumni, for yourself, but also the cameras.

Love lessons we learned from Bachelor in Paradise. Post continues below video.

It's no wonder couples fall in love within a matter of weeks.

It was ironic, then, that successful couple Glenn Smith and Alisha Aitken-Radburn's plans to take things slow once they returned to their individual lives in opposite ends of the country didn't quite work out that way.

﻿"We came out and we were going to do long distance in 2020," Glenn, 32, told Mamamia following the BIP finale.

"We discussed how we both had our roots in Perth and Sydney, and we were going to happily do that. We went on a trip to Darwin and Bali and made sure we caught up every two or three weeks, and then when COVID hit we had to make the quick decision to get Alisha over to Perth before the borders were going to be shut."

Yep. Within months, Alisha, 27, had upped her life and moved to Western Australia, into the house Glenn shares with his twin brother Neil and his boyfriend Marty.

"I packed two suitcases full of clothes and came over to Perth and I've still been paying my Sydney rent for like half of this year," she said.

It is so nice to finally be able to share publicly how important this man is to me (commitment ceremonies on national TV aside). I had always held out hope in a little corner of my heart that putting myself out there on The Bachelor would lead me to my person. And I am so grateful it lead me to @glennsmith87 Seriously cannot wait to share all of our memories from the last nine months with you, here’s a lil snippet 🥰

Her car, full of all her other possessions, only arrived a month and a half ago, but she's fully embraced life in Perth - which is lucky because border closures mean she is effectively stuck there.

Moving in is a big step for any couple, and Glenn and Alisha said it couldn't have gone any better.

"I feel like in the wider scheme of things, coronavirus forcing people into isolation with loved ones is make or break. I won't speak for Glenn but for me it's been make," Alisha said, with Glenn agreeing.

As Paradise aired, Alisha and Glenn became known as the show's golden couple, but even they haven't been safe from scrutiny and very important investigations in their relationship.

The girl who changed my world forever. I Love you @alisha.aitkenradburn 9 months collecting memories together. I couldn’t imagine my life with out you now. ❤️

Last week, So Dramatic! podcast host Megan Pustetto claimed Glenn and Alisha had both kissed other BIP cast members on nights out, before patching things up. The couple admitted on radio this morning that Glenn did hook up with Helena "almost nine months ago," in what they described as "a week of chaos".

Speaking to Bec, Cosi and Lehmo, Glenn said, "look I'm not going to deny it, it did happen".

"Me and Alisha worked through it at the time and that was nine months ago... and it's not really relevant now."

Alisha said the scrutiny is new, and Glenn often has to get her off her phone to stop her reading all the gossip and rumours.

"But the biggest thing Glenn and I have as a couple is we're really good communicators. From Paradise, we are just really attuned to each other's emotions," she said.

"We've traversed heaps of different stuff. The conflicts in Paradise, the challenges of corona, living together probably a bit earlier than we expected."

"It's that amazing connection that we've had since day dot that's lead us to where we are now and allowed us to be here."

When it is pointed out this sounds like a healthy relationship - especially in contrast to many others on reality TV - they laugh: "We're normal people. We're real people!"

After nine months of keeping their relationship on the down-low, the pair said they were pleased they could now be seen together and share such a big part of their lives.

"People always ask 'was it hard keeping it secret', and coronavirus probably made it a little easier because it's like, let's sit at home, start a veggie patch and cook dinner every night," Glenn said, in perhaps the most wholesome sentence of the season.

"I think we're just excited to be out with friends and family and enjoy the next, normal chapter of life."

Normal, with a side of juicy Bach-related gossip, we're sure.