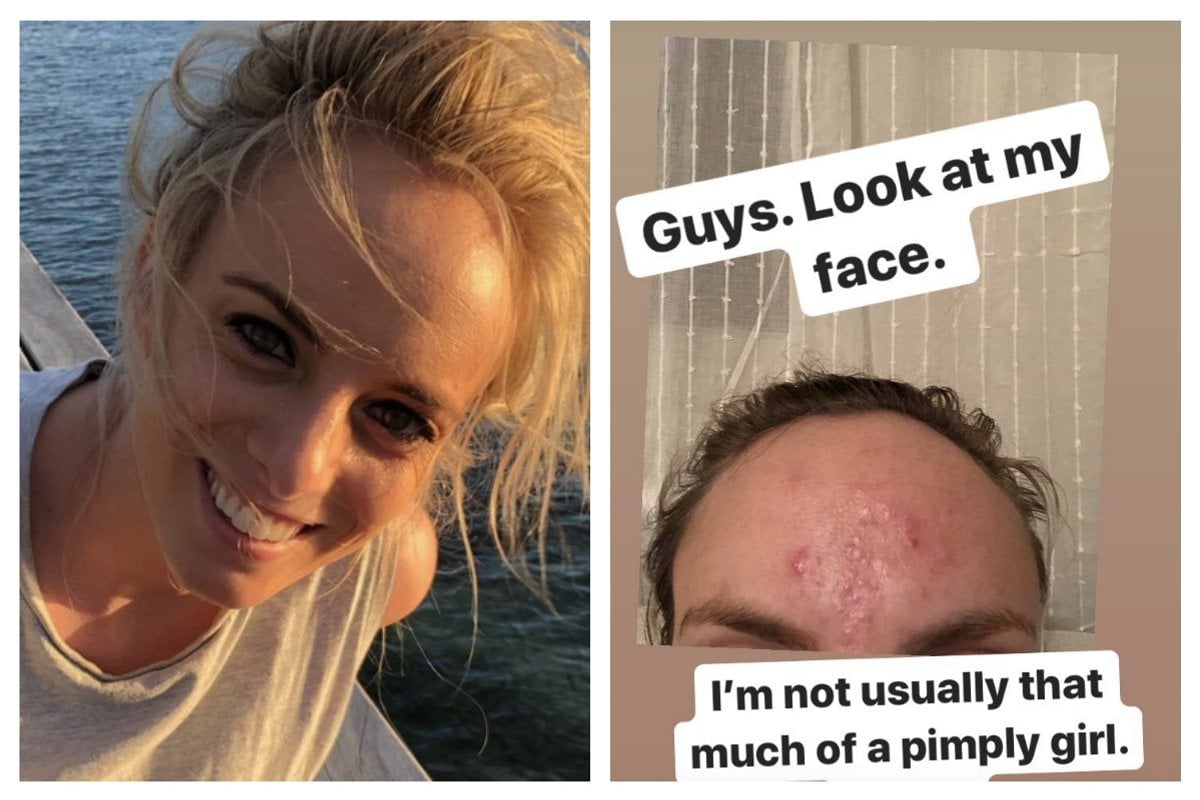 It started with a facial.

I'd never had one before, and I was feeling fancy. So I booked one, laid back, and had a stranger rub some nice-smelling products onto (into?) my face.

A couple of days later, I noticed a few pimples. I had heard about 'skin purging' - a reaction that can happen after a facial or skin treatment - where congestion is brought to the surface and essentially, your skin gets worse before it gets better.

Fine, I thought. Radically inconvenient, and slightly ironic, but fine. Yes, I just spent a silly amount of money on a facial, and yes, my skin got temporarily worse. But soon I'd be like a glowing slug whose skin would GLISTEN with DEWINESS and HEALTH.

Then a week went by. Then two weeks. Then a month.

It became clear that this wasn't a few pimples, or a temperamental breakout. My skin had erupted into full-blown acne, the likes of which I hadn't seen since I was 15. I still don't know if the facial caused it or if I just happened to have a bout of the worst acne of my adult life in the weeks after getting one for the first time. Either way, I suddenly had adult acne, and every morning when I looked in the mirror, it was becoming more severe.

I've been fairly lucky in adulthood to not have to worry too much about my skin. I attribute a lot of that to the Pill, which seems for the most part to have tamed my face to the point where I could roll in dirt, put on eight layers of makeup, go to sleep for three days and wake up with skin that's like 'dude wtf,' but mostly fine.

For some reason, however, 2020 was the year that stopped. 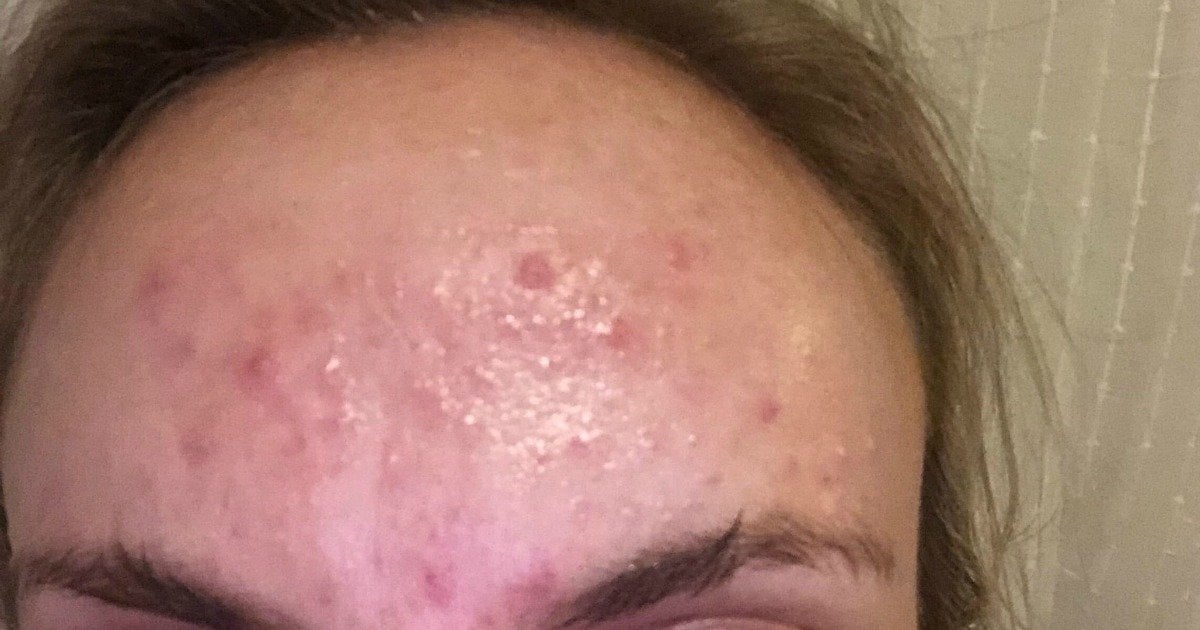 ... Oh. This was me with lots of skincare on, hoping it might make the acne go away. ASAP. But look, nothing excuses my eyebrows?! Image: Supplied.

I spent the first month convincing myself that if I just went back to my normal routine, it would clear up.

But anyone who's had acne as an adult knows your patience runs out really, really fast. It evaporates bit by bit, every time you go to put makeup on and find no product - no matter how thick - will do even a moderately good job of covering what's happening. Every time you have a conversation with someone and see their eyes instinctively darting to your forehead, then your eyebrows, then your cheeks. Every time your face actually hurts by the end of the day because you have cystic pimples that are growing deeper into your skin, taking away any tiny sense of control you thought you had over your appearance.

When it became clear my skin was getting rapidly worse - not better - I did what any self-respecting adult would do. I went deep on Google, and read approximately 33400 suggestions for how to treat it. Then, I started trying them. 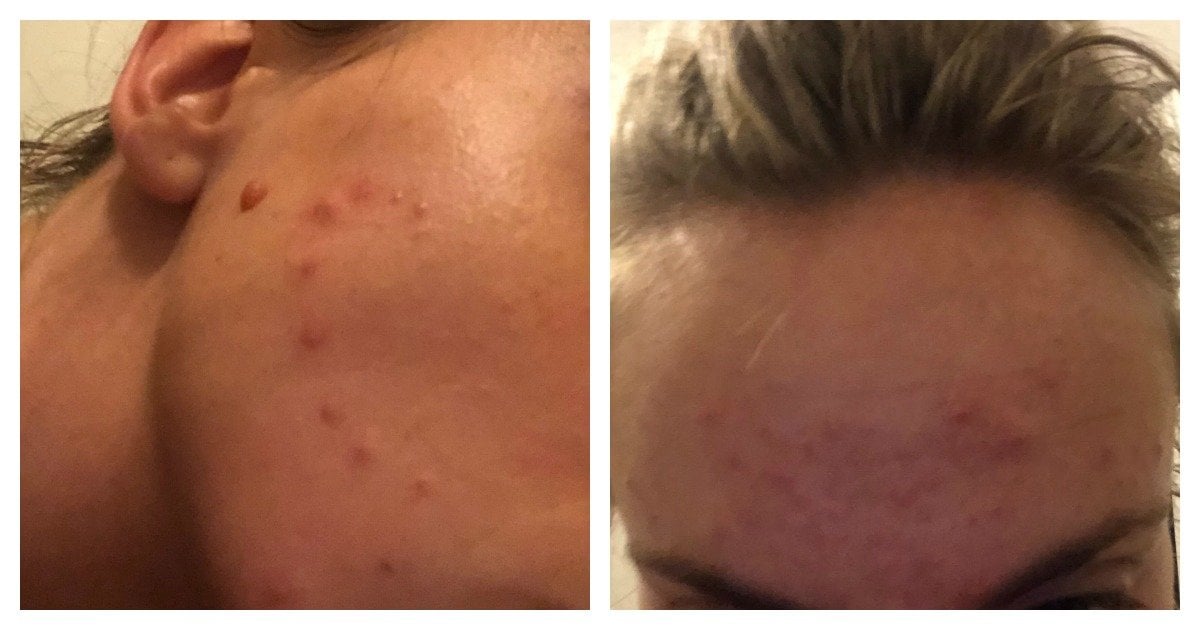 WHY DID MY ACNE FORM AN ALMOST PERFECT LINE ON MY CHEEK. Image: Supplied.

First, I decided that my problem was definitely, without a doubt, my face wash. My supermarket cleanser was definitely too harsh, so I just needed a gentle one! That would fix everything!

So I switched to an oil cleanser. It was... beautiful. It smelled delicious, somehow got all my makeup off, and almost made the process of washing my face seem... mindful.

Then I looked in the mirror.

'We're very sensitive now,' my face skin whispered to me, after a lifetime of not being sensitive at all. 'Any change you make we'll respond with pimples hahahahaha.'

But it wasn't funny. It was annoying. And I wasn't ready to accept that I now had sensitive skin that would react to every product under the sun.

Next, the internet told me my magic solution was obviously retinol. It's meant to fight acne by pulling dead skin cells out of pores and just generally being a potion made my beautiful people to help the rest of us out. For weeks on end, I used retinol every second night (too frequently, some most would say). All that happened was my skin got angrier and angrier, as thought it was yelling 'WE'RE NOT IN A GOOD PLACE, LADY,' and my acne got worse.

Of course, I don't think anyone claims that retinol will fix your acne overnight, but that's the thing. When your skin has taken on a life of its own, leaving you dreading going out in public because of how self-conscious you've suddenly become, you don't want a solution that will take months. You need one... NOW. 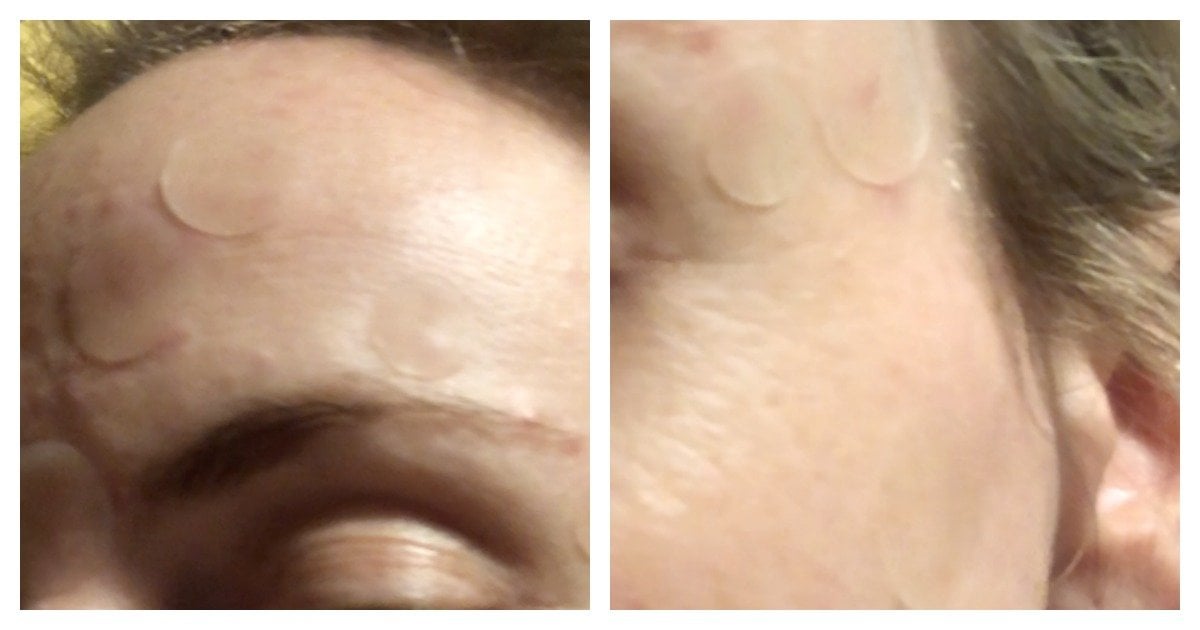 The time I tried to use tea tree oil patches to clear my pimples. Spoiler alert - didn't work. Image: Supplied.

So began a series of trying things for a few days to a week each, and not seeing any results whatsoever. I tried:

- An AHA and a BHA (two types of chemical exfoliants)

- Benzoyl peroxide (it burnt my pimples to oblivion, but by the time one had flaked off, three more were waiting to say hi)

- Hyaluronic acid (basically a moisturising product, because maybe my skin was breaking out because it was just too dry!)

I believe in my soul that my skin was trolling me. And I was sick of it.

But the 'magic fix' for my acne actually came along by accident.

A few months prior, I had booked myself in to get a skin cancer check. It was with a specialist, and he or she was going to look at every single bit of my skin and see if any of my moles or freckles rang alarm bells.

One day after work, I made my way to the appointment, feeling dejected and frustrated because of my now constant struggle with my skin. It hadn't occurred to me to bring it up during the appointment, because this was a very important skin cancer check and not about my vain worries about my face.

But after checking my skin (and finding nothing to worry about - thankfully), the doctor looked at me and said gently: "So, you have acne?"

I word-vomited that the universe was crazy and nothing was fixing it and maybe the facial had caused it or perhaps I had messed around with the Pill or it could be that Mercury was in retrograde or maybe stress because I don't know if you've noticed, Sir, but the world is falling apart and Donald Trump won't stop... yelling.

The doctor asked if I'd like an antibiotic gel to clear it up, and I said: oh no thanks I'll keep struggling alone and using things that don't work, JUST KIDDING WHERE'S THE GEL AND MAY I BATHE IN IT.

He prescribed the gel (which works by controlling and killing the skin bacteria that causes acne), I bought it from the chemist, and no joke.

My. Skin. Was. Almost. Completely. Clear.

The point of this story isn't to promote an antibiotic cream to treat acne, or to criticise other approaches.

It's simply to highlight that when something weird is going on with your body - whether it's your skin or your hair or your nails or whatever else - it might be worth seeking out a medical opinion for a medical solution.

I hadn't even known that an antibiotic gel for acne was a thing. I would've felt silly ever going to my doctor to ask about my skin, thinking I was very much wasting their time. But it was having an impact on my day-to-day life, and there was a treatment all along that took THREE DAYS.

So don't hesitate to make a fuss and ask questions when things about your body don't make sense.

Now, a month or so after starting on the antibiotic gel, my skin is back to normal. Not perfect (nowhere near), but nothing like the adult acne that wreaked havoc on my mood every morning. 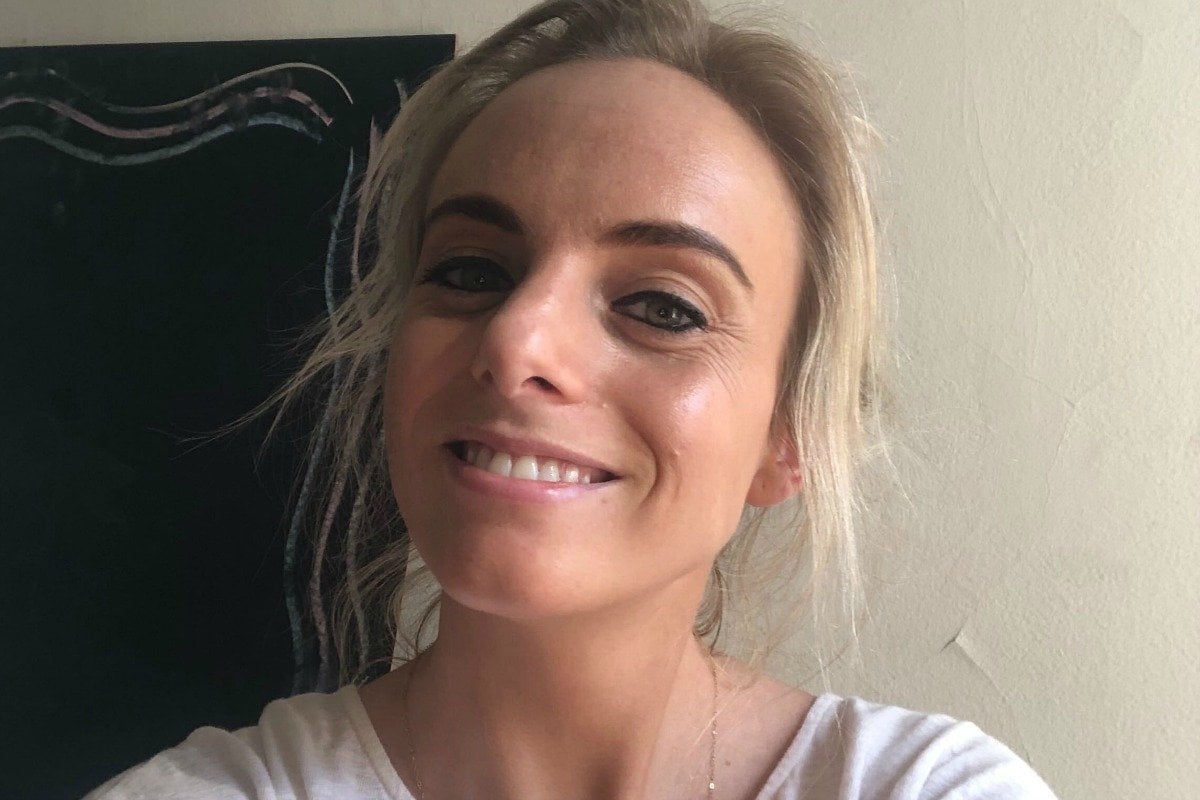 I can also use those products my skin seemed too sensitive for just a few weeks ago.

So ask for help!

And in my humble opinion, tea tree oil does jack sh*t.

Reply
Upvote
Two of my kids had acne when they reached puberty. With only one application of acne treatment serum of dermalmd, the acne started to decrease. With daily use, it goes away completely. Recommend.
A
anonymous 2 years ago

Reply
Upvote
The antibiotics will be wrecking your gut though and will be the cause of new problems. Starting at the gut to find out what is causing the inflammation in your body should always be the first step in health care, and petrochemicals the last resort.
R
rush 2 years ago

Reply
Upvote
@anonymous it's a topical gel, is that going to upset her gut?
C
cat 2 years ago