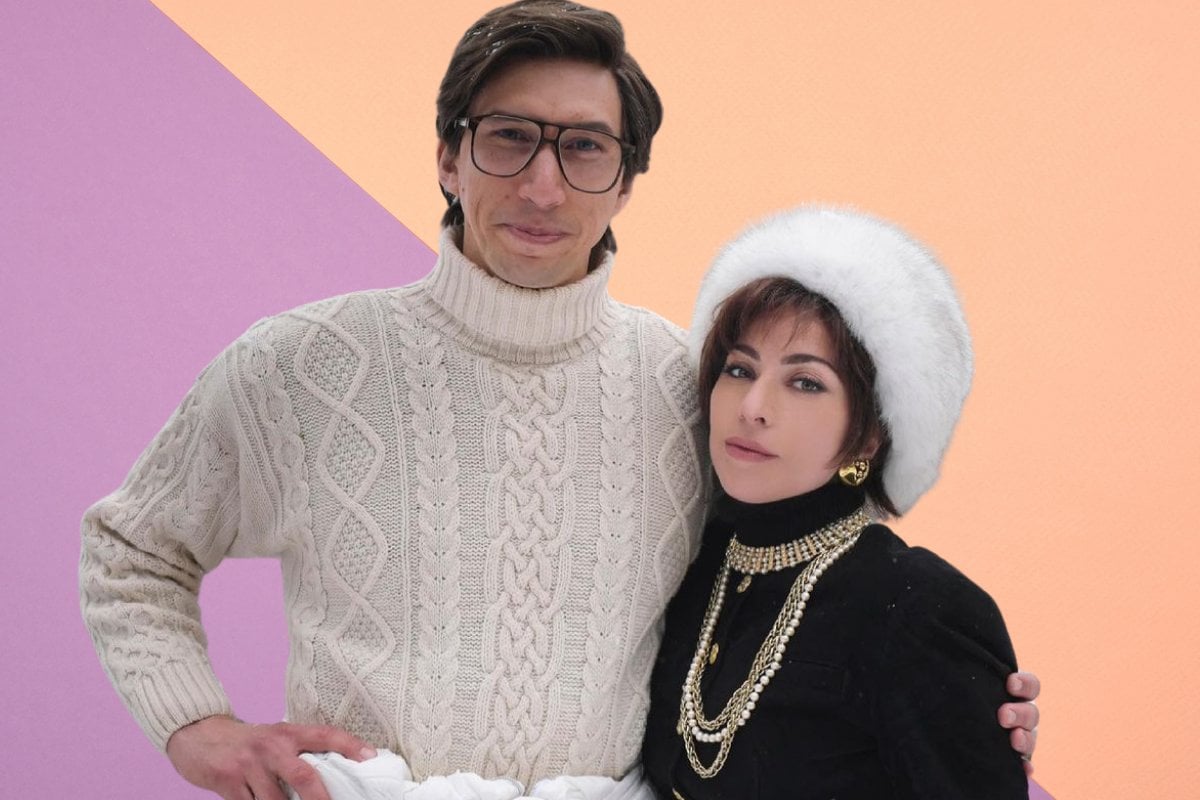 No, seriously. Get used to seeing Adam Driver’s face because you’re about to see it absolutely everywhere.

After dominating our screens in Netflix's Golden Globe-nominated film Marriage Story and Star Wars: The Rise of Skywalker in 2019, the actor is set to appear in some of the most anticipated releases of 2021.

In the coming months, Driver will appear alongside Ben Affleck and Matt Damon in The Last Duel, and portray Maurizio Gucci opposite Lady Gaga's Patrizia Reggiani in Ridley Scott's House of Gucci.

On Wednesday, Lady Gaga shared a photo from the set of House of Gucci, featuring the pair dressed in winter wear.

The biographical film, which has been in the works for well over a decade, will follow the life of Patrizia Reggiani, who was convicted of orchestrating the assassination of her ex-husband and the former head of Gucci, Maurizio Gucci.

Although the film isn't set to be released until November, fans are already obsessing over Adam Driver and a certain cream-coloured cable-knit sweater.

thank you adam driver for continuing the knives out sweater legacy pic.twitter.com/3n0LpU1zoK

You know what? Just give me Adam Driver in that sweater all day and leave me alone.

adam driver in that sweater 😳 pic.twitter.com/yAY6VrE1N4

Put simply, he was a whiny, six-foot-tall baby who threw ugly temper tantrums.

But then... everything changed.

In fact, I can distinctly remember the moment Adam Driver became hot in Girls.

Me when I first Me moments
saw Adam Driver: later: pic.twitter.com/60Hk7tzDeX

Thankfully, after his time on Girls wrapped up, Driver moved onto other projects... where he threw less temper tantrums. Well, sort of.

Shortly before Girls came to an end in 2017, Driver made his debut as the dark and moody Kylo Ren in Star Wars: The Force Awakens in 2015.

Then, of course, came Star Wars: The Last Jedi and that infamous shirtless-in-high-waisted-pants scene in 2017.

Since then, Driver has garnered critical acclaim thanks to his appearances in Spike Lee’s BlacKkKlansman in 2018, The Report in 2019 and Burn This on Broadway, which led to the actor being described by the New York Magazine as "a wise old oak tree on Viagra".

But it wasn’t until December 2019 that the world’s collective love and adoration for the American actor grew even stronger.

Take a look at the trailer for Netflix’s Marriage Story starring Adam Driver below. Post continues after video.

The film, starring Scarlett Johansson as Nicole and Adam Driver as Charlie, followed a married couple as they navigated divorce while co-parenting their young son.

After its release, the film was nominated for a number of awards, with Laura Dern winning a Golden Globe for Best Supporting Actress and Driver winning the AACTA Award for Best International Actor.

The film was also nominated in six categories – including Best Picture, Best Actor and Best Actress – at the Oscars.

But despite the endless accolades the movie received, there was just one thing on the mind of viewers.

can you all PLEASE stop with this tedious ‘adam driver isn’t hot’ or ‘adam driver is hot in this special way only certain people understand’ discourse and just look at his gq shoots like normal people pic.twitter.com/iFP2zG8gCg

adam driver has a dramatic bone structure, black hair, has the body type of a boxer, looks like he’s 6’5, and has a deep ass voice of course he’s hot

“Adam Driver appears to have the physical strength to throw you over his shoulder and also the emotional depth to understand your extremely passionate response to the Little Women trailer.
And in 2019, if you don’t have that kind of range, then you’re not really worth our lust.” pic.twitter.com/p0WykwRBZL

Now that news media are finally acknowledging how attractive, talented and big Adam Driver is, all I ask is that they join our campaign to cast him as Mr. Darcy in the next adaptation of Pride and Prejudice.

Straight men don’t want Adam Driver to be hot because he is hot for reasons they could also be hot but aren’t because they’re lazy. He is interesting and has a personality. It’s easier to think hot is just genetic symmetry because that lets them off the hook.

I feel real empathy for those of you just now realizing Adam Driver is hot. The last eight years of your lives must have been so unfulfilling. pic.twitter.com/8r54bUmEOG

adam driver is really hot no i will not elaborate

From his unique features and his menacing Kylo Ren voice to his shaggy black hair and his towering height, Adam Driver has well and truly joined the ranks of the internet’s favourite boyfriends.

As Opheli Garcia Lawler wrote for Mic, "Adam Driver appears to have the physical strength to throw you over his shoulder and also the emotional depth to understand your extremely passionate response to the Little Women trailer".

And honestly, we don’t think there’s a better way to put it.

Do you agree with the internet’s obsession with Adam Driver? Let us know your thoughts in the comments.

Reply
Upvote
I couldn't stand him in Girls, but he's grown on me. Loved him on Last Week Tonight with John Oliver, and the Kylo Ren/Undercover Boss sketches he did on SNL were pretty funny.