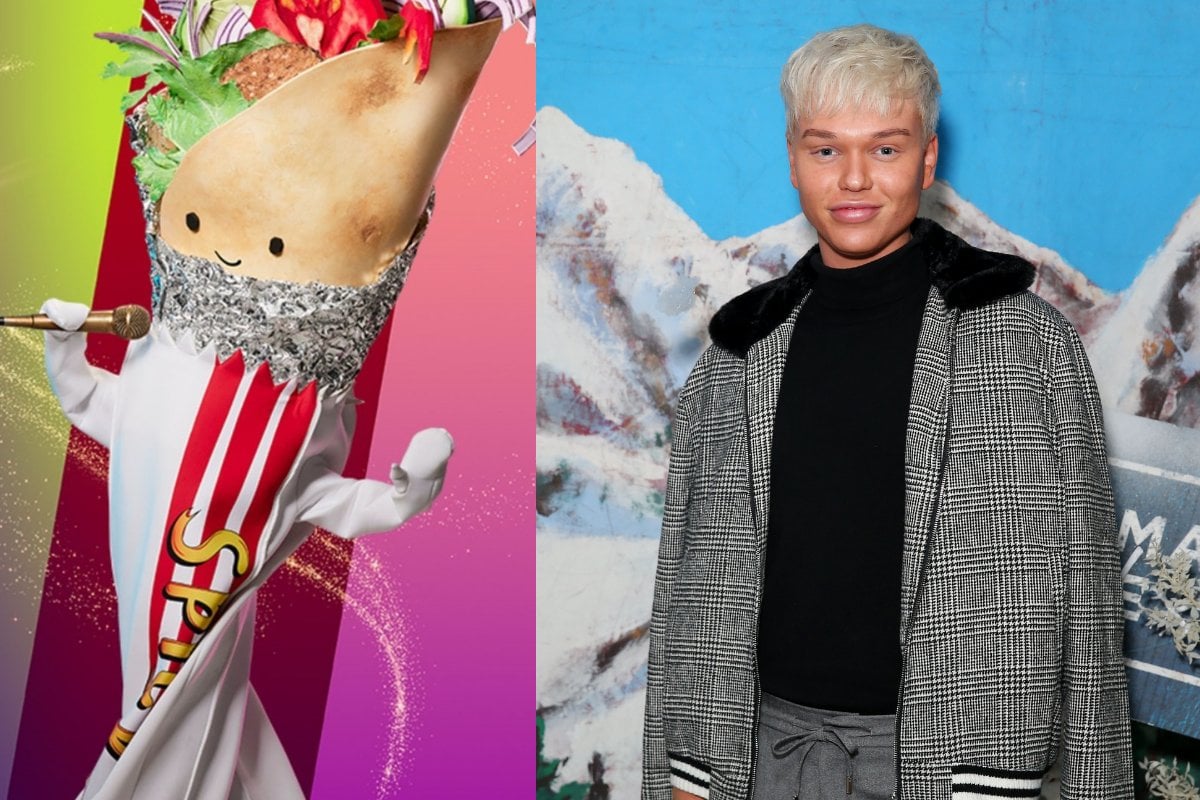 The internet has hypothesised at just who is exactly behind the titanium Kebab voice on The Masked Singer, and we are absolutely convinced it is Jack Vidgen.

The powerhouse singer first came on the scene at just 14-years-old, when he took the crown on Australia's Got Talent.

After taking a break from the spotlight, Vidgen came back to make his mark once again by competing on The Voice. He secured a spot in Guy Sebastian's team but just narrowly missed out on the win.

In 2020, he competed on the Eurovision competition, Australia Decides and a year later; he tested his limits by going on I'm a Celebrity Get Me Out of Here.

Now, Mamamia, along with the rest of Australia, is convinced they've found out his next gig - Kebab on The Masked Singer!

Each week, viewers have watched Kebab become a voice to be reckoned with.

While stars like Macy Gray and Vinnie Jones have already been unmasked, Kebab is yet to unveil who they are.

Watch Kebab's 'Stay With Me' Performance on The Masked Singer. Post continues after video.

So far, here is what Kebab has had to say.

Clue: When asked if they're a man or a woman, Kebab said: "Here’s what I can say about that. Mostly I’m one. But I have been known to be the other."

Evidence: Vidgen is big in the nightlife scene and glamming up is clearly one of his favourite pastimes. Before Sydney's last (hopefully) lockdown, he appeared on social media in drag - with long, blonde tresses and a matching outfit. He eventually had to set the record straight after being inundated with messages asking if he is transgender.

"I've had like hundreds of messages asking if I'm trans. I'm not — I was just dressing up in drag with friends for fun for a night out," he wrote at the time.

"Being trans is a beautiful thing though and I love that people are asking questions. My pronounces are he/him."

Clue: "I like the inner city. Quiet at times. But a bit of hot sauce… I go off. A real wild one."

Evidence: Vidgen is a city boy, through and through. Just minutes from the LGBTQI+ friendly Oxford Street and beautiful beaches, we couldn't ever picture the 'I am King, I am Queen' singer anywhere else but in the heart of Sydney.

Clue: "I shot for the moon once. Did I aim too high? I don’t think so. One taste of a Kebab and you know I’m a winner. But it’s an Aussie flavour others don’t appreciate."

Evidence: Vidgen fought for a spot on the Eurovision competition, Australia Decides. While Montaigne ended up winning, that didn't mean Vidgen wasn't incredibly close to the real prize: representing Australia. There has been a debate for over six years on why Australia is allowed to compete in Eurovision when, technically, we are not a part of the EU. This one clue could point to his shot for singing in the international competition, before narrowly missing out.

Clue: "I’m Kebab and I reckon I’m everyone’s guilty pleasure! I like to look good. Nobody likes a messy Kebab. And as a kebab, I’m pretty desirable. A certain celebrity thinks so too. Wink wink. But what happens on the kebab van, stays on the kebab van."

Evidence: Make no mistake, Vidgen is the definition of glamorous. Not a hair out of place or a shirt crease in sight, Vidgen knows how to dress to impress. With over 80,000 followers on Instagram, it appears the rest of Australia seems to agree as well. 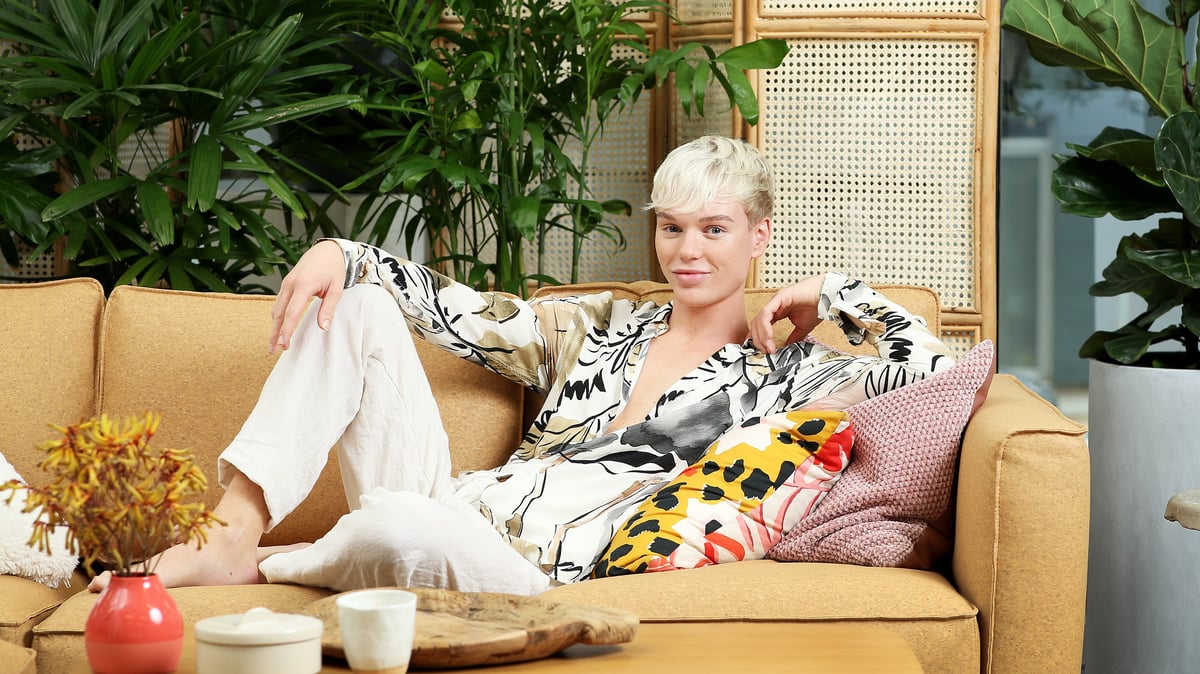 Clue: "Hey, I’m Kebab! You know you like me. You know, I’ve been compared to other types of food, like I’m Australia’s answer to a hot dog. Yeah, no! I’m a Kebab! But I wasn’t always happy being a kebab, the life of a fast food can be lonely."

Evidence: Vidgen was only a teenager when he reached national fame, but being in the spotlight was not always what he desired.

"It was also so nice to have that break as well to chill out, grow up and be a kid for a little while and to come back over the last year," he previously told the Daily Mail.

"I've been able to come back into it after forming my own beliefs and opinions and all that kind of thing and becoming an adult and stepping back into the public eye and to having a career in the music industry."

Clue: "Do you know why kebab vans have wheels? Because we’re always on the move. But we keep coming back to the best spot. Do you remember the first time you had a Kebab? Unforgettable, right? Is the first time always the best?"

Evidence: The 'Pray' singer moved to Los Angeles when he was 16-years-old to focus on his career, before returning back to his roots in Sydney.

"At the time, my goal was like, 'I want to make it in America'. [But] I hit a lot of roadblocks and I got exposed to a lot of things that I don't think is great to be exposed to at that age," he revealed during his time on The Voice.

"It's really scary to be alone and kind of at rock bottom."

He may always be on the move, but Vidgen knows Sydney is home. Thankfully, the titanium voice was able to find himself and a budding career again, among family, friends and his hometown.

We are wholeheartedly convinced Kebab is the one and only Jack Vidgen. He may have denied the claims, but there is no mistaking a voice like that.