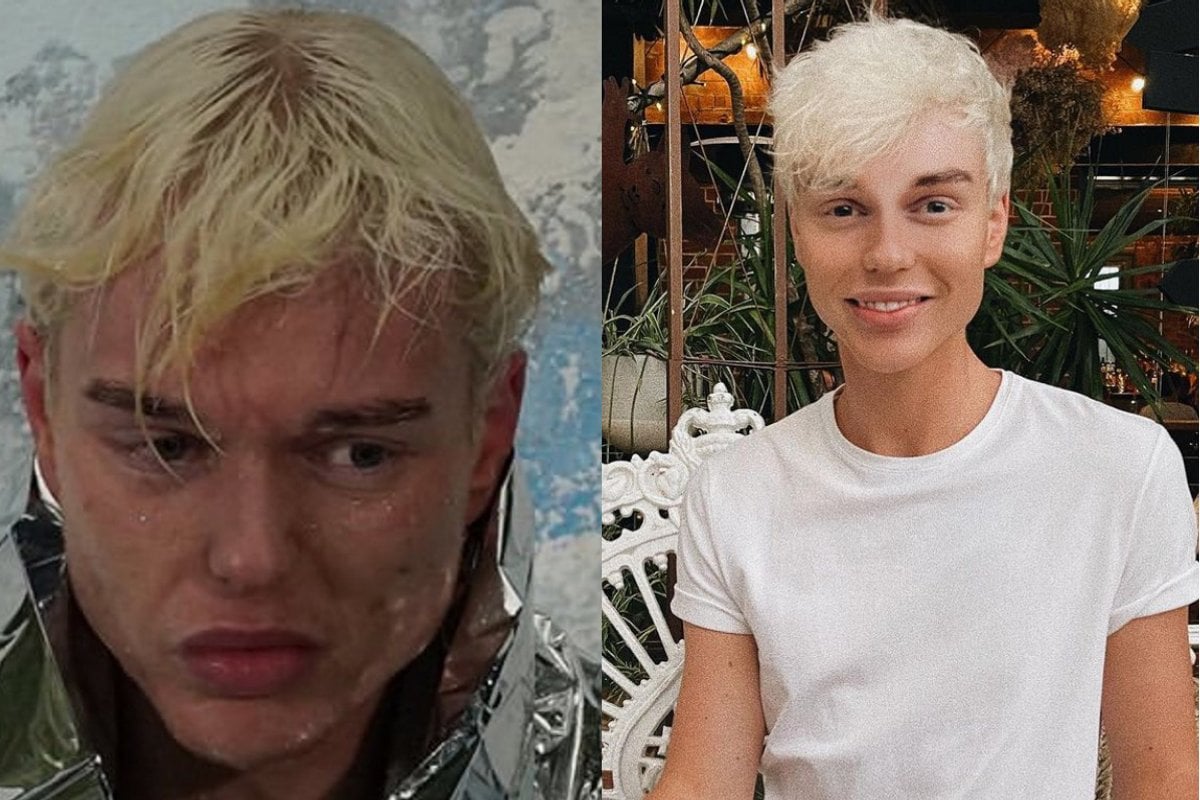 1. “I felt drained and exhausted.” Jack Vidgen on his time in the jungle.

There was never a point during any of I'm a Celebrity's brutal trials that Jack Vidgen felt like quitting.

Not even during or after the 'Ice Ice Baby Trial', where he, Grant Denyer, Pettifleur Berenger and Travis Varcoe were tasked with entering a tank filled with ice cold water for nine long minutes, in order to pump a lever at the bottom of the tank.

Immediately afterwards, they had to be wrapped in space blankets to prevent hypothermia.

Speaking to Mamamia after his ejection (literally) in Sunday night's episode, Vidgen said that was one of the hardest parts of his time in camp.

"I never considered quitting. Even with the ice bucket challenge, I went into the show with the mindset of 'I'm not going to quit, I want to give it my all and give everything a go'.

"It really didn't go through my mind, but obviously the ice bucket challenge was really, really hard. I warmed up eventually, but that was so hard."

Vidgen said his eviction, which came the following day, may have actually helped his recovery from the challenge which impacted Denyer for days.

"The rest of the day I just felt really drained and exhausted," Vidgen explained.

"It was the night afterwards when I got ejected so I think going home and having a hot shower and food really made up for the aftermath of the ice bucket challenge."

As for the other main challenges from camp, Vidgen said he'd underestimated the boredom and hunger.

"You can go for a swim, play some games in the pool, chat to people or have a nap. There's really nothing else to do, we were quite bored most of the time when we weren't doing trials.

"That's why, even though the trials are so horrific, you kind of get excited about them because it's something to do," he explained.

"I think the hunger was a lot more than expected. I knew we were going to be hungry, but it was a lot more draining. The trials were a lot more intense than I anticipated, but again I was just going into it ready to tackle anything. That's what my attitude was."

He said he was really pleased with being able to show Australia his true self during his appearance.

"Looking back on it, I didn't know what I'd think of myself and how I'd come across on TV. I'm really proud of myself and how it played out... You never know with TV shows how you will be perceived and it's just been such a positive response."

And that hilariously rough exit, being flung from a chair into a swamp - Vidgen's okay with the laughs, even at his expense.

2. Apparently Colin Fassnidge was low-key dreading that Delta Goodrem would be on I’m A Celeb.

Celebrity chef, Colin Fassnidge has opened up about the one celeb he really didn't want to see in the jungle, and it was... (checks note) Delta Goodrem?

In case you missed it, in 2019 Fassnidge was vocal about disliking Delta Goodrem on the Sex Love Magic podcast, claiming she "winds (him) up".

“I like The Voice, but Delta Goodrem winds me up,” he said “My kids love her and she’s probably a good role model – she just winds me up!”

So, in an interview with New Idea this week, when asked if he was worried about seeing Delta in the jungle, he confessed "it crossed (his) mind".

“It has crossed my mind,” he said, adding that it “would have made great TV”.

It looks like Sophie Monk, who announced her engagement to Joshua Gross on Friday, is sporting a pretty expensive engagement ring. And by pretty experience we mean a casual $50,000, according to the Daily Mail.

The publication reports that the bespoke diamond ring was designed by Sydney jeweller Luke Rose.

And on a romantic note, the design of the ring apparently has to do with how the couple met.

"Given they met on a plane, they came up with the diamond set under rail that has the curves of a cloud," an unnamed source told the publication.

"Basically, the ring is all about 'two become one, up in the clouds'."

Sophie and Josh, who is a neurosurgical robotics consultant, met on a flight in August 2018 from Europe to Australia.

"I had just finished filming Love Island in Mallorca and was on my way to San Francisco for a random TV gig with Channel Nine when I made a last-minute decision to go back to Australia," she told the Sydney Morning Herald last year.

4. Paris Hilton may be getting her own cooking show on Netflix, and we already know this will be iconic.

In some surprising yet very exciting news, it looks like Paris Hilton might be getting her very own cooking show.

According to an anonymous submission to Deuxmoi, Paris is set to get her own show on Netflix, which will feature celebrity guests like Kim Kardashian and Demi Lovato.

While nothing has officially been confirmed, fans on Twitter have pointed out that Demi recently visited Paris' house... which sounds pretty promising.

Demi is supposed to be a special guest in Paris Hilton’s cooking show on Netflix pic.twitter.com/yULwR68NVJ

Plus, we already know Paris likes to cook, considering she shared a video called Cooking With Paris on YouTube last year, where she taught her viewers how to make her "famous lasagna".

We'll just have to wait and see if the rumours are true.

5. The MAFS reunion is officially two weeks away. Here's everything we know that happens so far.

In case you missed it, we're getting an all-star MAFS two-part special in 2021, which is something no one needed or wanted. But now we know it's happening... we're not mad. And now it's only two weeks away.

We now have our first look at the new season after Channel Nine dropped a trailer on Sunday afternoon.

Plus, to remind us that the show has actually had *checks notes*... FOUR success stories, some of the remaining couples will join in to show the rest of the cast exactly what MAFS' 6.66 per cent success rate looks like.

"The bitch is back," former contestant Cyrell Paule says as she enters the room.

The (unconfirmed) reunion is expected to include: