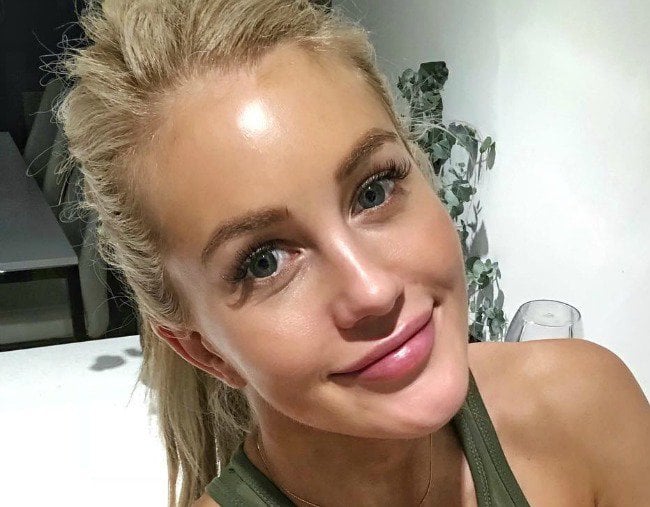 Ali Oetjen was an unexpected choice for this year’s Bachelorette.

The 32-year-old has already experienced two failed attempts in the franchise. She competed for Tim Robard’s heart in the first season of The Bachelor and then she had a short-lived romance with Grant Kemp, a former contestant from the US franchise of the show, on Bachelor in Paradise.

After the finale aired, Grant went public with claims that Ali had cheated on him with his best friend… on some stairs. Ali has remained the target of intense media scrutiny as Grant has continued to fuel rumours about her past relationships and sexual partners.

Now, the whole country seems to have formed an opinion about Ali before the show has even begun.

But that hasn’t stopped Ali from coming back for more.

On Wednesday night, the fitness influencer will meet 16 new suitors. She told Mamamia she’s not going to let Grant ruin that moment for her.

“What Grant is saying about me is just horrible,” she said. “If you have an ex saying stuff about what you discussed in your relationship – someone that you trusted – and now it’s out there, it’s not very nice.”

Ali said she’s absolutely moved on from Grant – even though he insists on continuing to comment on her life.

“It’s something that I have definitely left in the past. It’s really annoying. I feel like he’s definitely just someone who’s trying to ride this wave and get his name in the headlines all the time and he’s succeeding,” she told Mamamia.

While the whole Grant debacle is on her mind this week, Ali says she’s “so happy and at peace with everything” after her experience on The Bachelorette.

“I just feel sorry for him,” she said.

Ali said she decided to return to the franchise because she wasn’t prepared to give up on love.

“I feel like whoever falls in love the first time they try… good on them and really good luck,” she explained.

“I keep on trying because I’m not going to settle for anyone less than I deserve. I felt like this opportunity was definitely going to allow me to find that person.”

And this time she was determined to find someone who was, erm, the complete opposite of Grant.

When asked what her dealbreakers were, the Bachelorette said she didn’t want anyone “nasty”.

???? Can’t wait! ???? with wingman @osher_gunsberg ❤️This Wednesday Ch:10 7.30pm ❤️ I’m beyond excited for this to start!! On the red carpet I’m only looking ahead… into my future…into the eyes of my Mr Right(fingers crossed)!! ????????#bachelorette #thebachelorette #bacheloretteau

“Someone that doesn’t treat people the way they would want to be treated,” she explained. “Someone who would talk about someone behind their back.”

Throughout the process, Ali said she made sure she took things slowly so she could avoid making the same mistakes she did in the past.

“I was wary of what I used to be like. I would fall in love very quickly. That definitely wasn’t going to happen again,” she said.

“This whole process was really cool because I could date a whole different calibre of guys, compare them all, and just take it a whole lot slower.

“I was able to stand back. The guys would tell me how they feel and I was then able to go away and ponder whether this was the right thing for me.”

When asked whether she did find Mr Right, Ali was coy… and then she started singing. ¯\_(ツ)_/¯