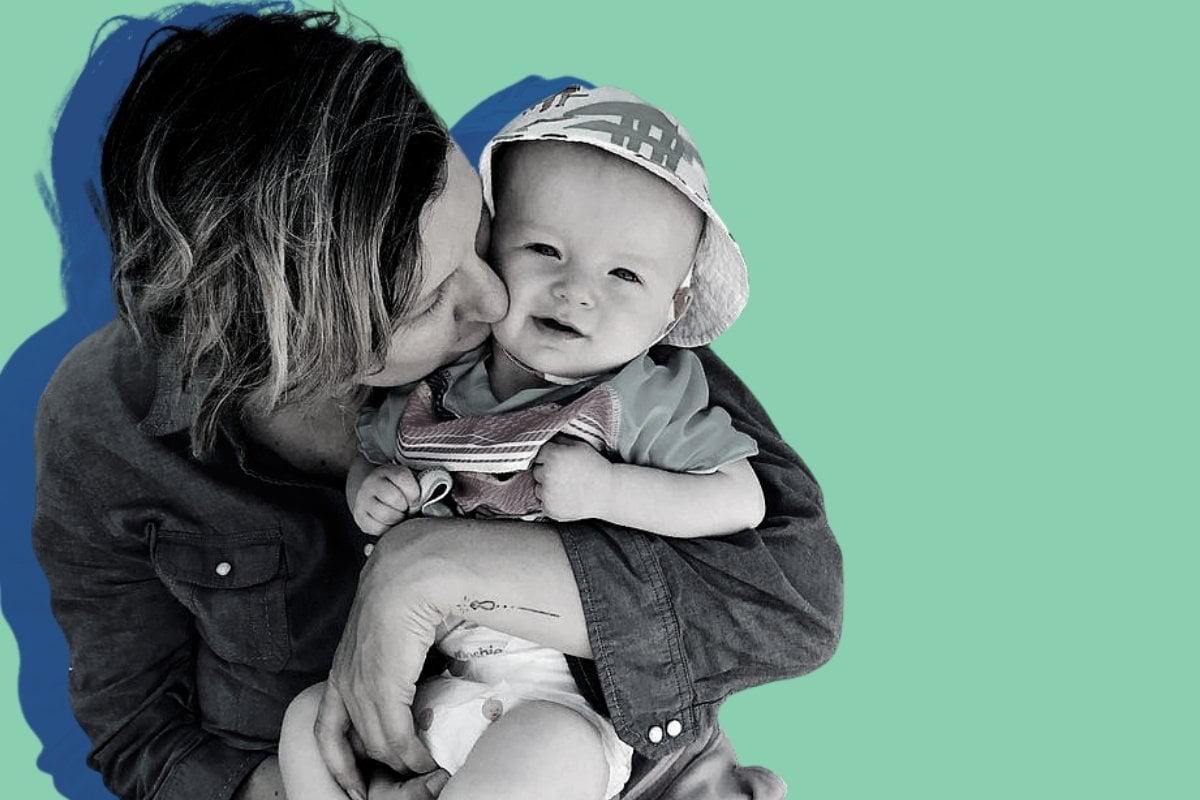 'Selfish' is a word Alexandra Collier has heard often about women like her; those who choose to become a parent without a partner.

It was late 2016 and Alexandra, who was living in New York at the time, dialled her parents back home in Melbourne. Through tears of heartbreak and fury, she told her mother that her five-year relationship was over and that, at 37 years old, she'd have to start a family by herself.

"Women who have babies on their own," her mother responded, "are only thinking about themselves and not the child."

Alexandra snapped back. "So, you chose to have me out of altruism?"

Alexandra now has a baby boy conceived via donor sperm, and is one among a growing number of Australian women who've become 'solo mothers by choice'.

Speaking to Mamamia's No Filter podcast, she noted that her desire to have children was no different to any other hopeful parent.

"People don't go into parenthood, even in marriages, with a kind of noble idea in mind of, like, 'I'm going to bequest a life upon a future being,'" she said. "I think it's just this thing that we do, it sort of unfolds."

For solo women, it just does so in a slightly different pattern.

There aren't any official stats that track just how many women chose to become solo mothers in Australia.

But data compiled by the Victorian Assisted Reproductive Treatment Authority shows that 54 per cent of people who access donor sperm are single women — by far the largest group represented.

Having carved out their own path to parenthood, these women have then forged active online and social communities in which they lean on each other for advice and support.

Their motivations for prioritising children over a romantic relationship are rich and varied. As are the means by which they created their families.

Some have children via a clinic-facilitated sperm donor, others via a friend or acquaintance, others through adoption or the foster-care system.

Listen to Mia Freedman's full chat with Alexandra Collier on No Filter. Post continues after.

When Alexandra started her process, she did have offers — usually drunken ones — from male friends looking to help her. But she didn't feel it was the right path to take.

"I [thought], 'They don't know how they're going to feel when they see a child; everyone falls in love with a baby. And then I'm going to be co-parenting with a friend,'" she said. "Sort of like an asexual, platonic relationship where there's a child involved — a family. And that felt really broad and complicated, and like I wouldn't have the decision-making in a lot of the processes that were happening. "

She chose to seek a donor via fertility clinic. And though donors are limited and in high-demand (there is a shortage nationwide), she found a suitable candidate.

In Australia, sperm donation must be altruistic, in other words, the donor cannot benefit financially from the donation. And there are state-imposed limits to the number of families that can be created from their sperm (in Victoria, for example, it's 10 and New South Wales it's 5).

In the case of anonymous donation, only limited details including physical attributes and medical history are shared. Although, both the donor and the recipient can opt in to being contacted, and their identity must be made available to donor-conceived children.

Read more: 3 women on precisely how much it cost them to have a baby on their own.

Alexandra learned through her clinic that a small number of other children have been conceived courtesy of her donor. So she signed up, just in case.

"If someone else puts their name down, a counsellor gets in touch with both of you and can connect you. It's a very mediated process," Alexandra said.

Yet the questions she most often receives about becoming a parent aren't about the process, about the resources available and the community around her, they're about the reaction of people in her life.

"I think people feel this fear of the kind of stigma or shame or the sense of failure around, 'What, so you're so desperate to have a child, you couldn't even find someone to partner up with?'" she said.

"[Because] having a partner has got cachet. We are all supposed to find our beloved. And then once we're in this partnership, we've been chosen and we've been validated and our choices have a precedent. If you have a child with someone else, that's got a long and storied history; there's nothing wrong with that."

Meanwhile, women who happen to be single when they have a child are supposedly 'irresponsible', 'selfish'.

"I actually find that the solo mums that I am now friends with, and have joined a community of, are so considered in their approach to [becoming a parent]," Alexandra said.

"They have looked at it from all angles, they're so conscientious. They thought about their financial future, their emotional future, who's going to support them, the happiness of their child. It's so planned and so thought out that for it to be called selfish feels quite ironic."

J
jupiter a year ago

Reply
Upvote
1 upvotes
Obviously entirely her choice but I do wish more people would choose fostering or adoption. There are so many children without parents or good role models who need us and who need love. If you have that love to give, please consider giving it to a child who needs you, not one that doesn’t even exist.
R
rush a year ago

Reply
Upvote
1 upvotes
@jupiter fostering is a bit of a different prospect than having a child of your own, though. I agree, it would be great if more people did it, but its not the same when there's a likelihood that the child will have to leave at some point. And the number of children adopted in Australia is so tiny. Overseas adoptions can take years and tens of thousands of dollars. Its not hard to see why people would opt for a sperm donor and single parenthood.
C
cat a year ago

Reply
Upvote
1 upvotes
@jupiter I know lots of people who would love to do that, but adoption is almost impossible in Australia (which is good, because we don't have a lot of abandoned children), and fostering is very hard to get into if you don't have your own children. They're unlikely to approve a couple who aren't parents or a single person at all.
Y
yeliabyeliab a year ago

Reply
Upvote
1 upvotes
Everybody has the right to know their biological parents and anyone who deprives their child of that is selfish (not saying this woman is doing that in the article).
Look back at the children who became adults from true anonymous donations in earlier years the and the mental and emotional pain it has caused them. Hence why in Australia children can access their donor at 18 and so many laws have been changed around that.
If you grew up with both your biological parents you really can’t understand this.
News
General
Opinion
True Crime
Politics
Sport
Explainer
Entertainment
Celebrity
Reality TV
Movies
TV
Books
Rogue
Royal
Lifestyle
Beauty
Fashion
Weddings
Home
Wellness
Health
Fitness
Travel
Food
Parents
Before The Bump
Pregnancy
Baby
Kids
Teens
School
Parent Opinion
Work & Money
Money
Finance
Career
Lady Startup
Relationships
Sex
Dating
Separation
Friendship
Family
Real Life
Couples