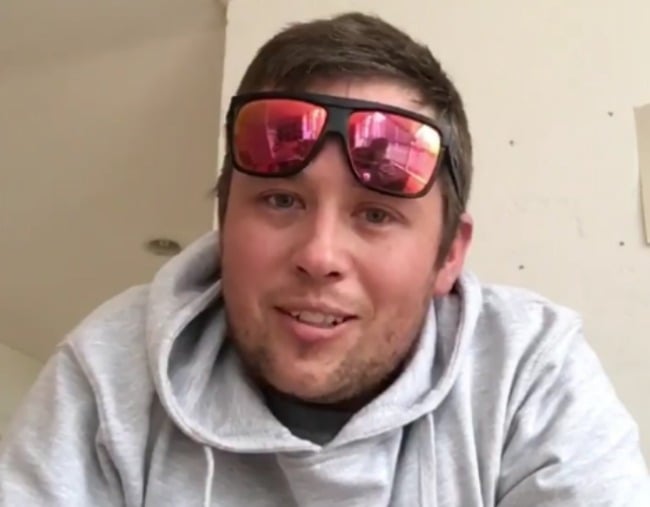 When Jakson Elfring heard the news that a young girl had been attacked in his home town, he knew he had to say something.

The young Dad-of-two recorded and shared a video to Facebook, calling on men to bring an end to Australia’s “shocking” rape culture.

“My message is simple – just respect each other,” Jakson told Mamamia.

In the video, the Victorian-based tradie explained how his wife’s heartbreak at the increase in sexual assault in Australia led him to “stand up and start saying something”.

“I looked over at my partner… and she has lost more hope. This has happened too often lately, it really has,” he said.

In the video, which has now been shared thousands of times, Jakson reiterated the importance of pulling up your mates if they’re making derogatory comments towards women.

“The rape culture here in Australia is shocking – it starts with a joke at work or it could be a text message or it could be something you tag your mate in on Facebook – it’s gotta stop, that’s crap,” he said.

“People need to learn to stand up and say something when you hear these things and stand up to your mates, if you hear them saying this sorta stuff, you need to tell them it’s not acceptable,” he continued.

Watch: Lisa Wilkinson speaks about rape culture and victim blaming on The Project.

“Whether you’ve got a daughter, a sister, a mum, aunty, grandmother, whatever it may be – start [standing up and saying something] today, otherwise we’re just gonna hear this stuff more and more on the news.”

He also added that men need to gain a greater understanding of sexual consent.

“Three of the easiest words you can live by is no means no. That’s three words: no means no. It’s not hard to understand. If you can’t live by that, there’s something wrong with you,” Jakson said.

Jakson, who is a father to two young boys, says respecting women needs to start in the home.

“As a dad I will be doing everything I can, I will try to lead by example and hopefully teach them a few right ways,” he said.

He added that men could start with having respect for their mothers.

You can watch Jakson’s video here:

Jakson, whose video has now been viewed over one million times and shared by more than 30,000 people, told Mamamia he wasn’t expecting such a huge reaction.

“Thank you Jackson! You have no idea how comforting it is to hear a bloke talk about this for women,” one person commented.

“Thanks for posting, this is the most encouraging thing I’ve seen in ages! I’m a parent of young boys too; we need to teach them (lead-by-example) to respect women & do away with this crappy ‘boys will be boys’ excuse,” another wrote.

Speaking to ABC Radio, the young father spoke about the video’s popularity.

“All I can say to young blokes like myself – and this probably sounds a little bit silly – at home we have a lot of Dr Seuss books and one of the Dr Seuss quotes is ‘So open your mouth lad, for every voice counts’.”

Fantastic! I love hearing from a man who gets it! We need many more men like him.

There seems to be this great misconception that if you in any way disrespect your mother or your sister or play rough and tumble with your mates you'll become a rapist and a murderer and that rape is an issue of not understanding what consent is. Unfortunately, it's a concept that is driven by an ideological agenda and has nothing to do with reality or common sense. A criminal, be it a murder, rapist, drug dealer, bank robber etc, all know that what they're doing is wrong, but they do it anyway. The rapist who raped and killed Jill Meagher knew what he was doing was wrong and illegal, but he did it anyway. Nobody would argue that Amanda Zukowski murdered her ex-boyfriend by setting his house on fire because she didn't respect her brother and father when she grew up. It's a sick and criminal mind that does that and it has nothing to do with gender.