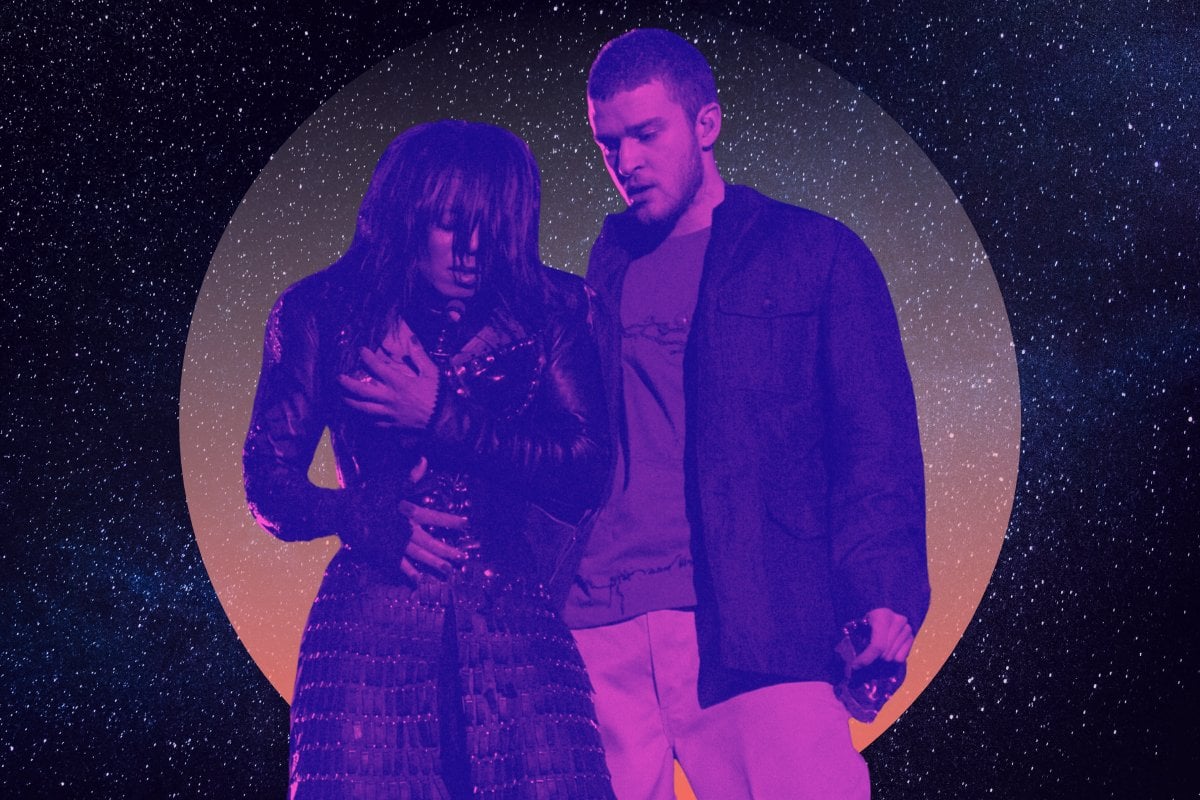 On February 1, 2004, the stage was set for the Super Bowl halftime performance.

Choreographers, lighting technicians, musicians, back up dancers, sound technicians and stage managers had spent weeks planning and coordinating a five-minute show that would be broadcast around the world.

Every single detail had been planned and double and triple checked.

Then two well-known recording artists stepped onto the stage.

The first pop star was music royalty. She'd grown up in a famous musical family and had been topping the charts as a solo artist for over 20 years. The second pop star was a former boy band member, who was shaking off his wholesome image and breaking out on his own.

By the end of the performance, the former would be blacklisted by the industry that had embraced her for over two decades, and the latter would enjoy a meteoric rise up the charts and into the hearts of fans all over the world.

The pop stars in question, Janet Jackson and Justin Timberlake, would forever be tied to "Nipplegate" and its fallout.

But it wouldn't be until almost 20 years later that we would look back on that moment and really question why it ruined one star's career and catapulted the other into further stardom.

On that night in February 2004, Jackson had been performing for three and a half minutes when Timberlake joined her on stage. Together, they performed a small chunk of his 2002 hit 'Rock Your Body'. Jackson sang and danced on stage, as Timberlake danced around her with his iconic 'white boy getting down in cargo pants' moves. In the closing moments, as Timberlake sang the lyrics "Bet I'll have you naked by the end of this song", he reached his right arm across the front of Jackson's body and pulled a section of her costume off, revealing her right breast.

Jackson's shock was palpable when she realised her bare breast had just been broadcast to millions of people around the world. Timberlake seemed confused. This wasn't the intended outcome.

We would later find out that Timberlake was only supposed to rip off the top layer of Jackson's costume, to reveal her red bra underneath. A "wardrobe malfunction'" was quickly blamed for leaving the singer exposed to the entire world.

While "Nipplegate" could be traced back to a simple mistake, a wardrobe malfunction, a bare breast during a live TV event that was watched by millions of American families, and fans around the world, could not slip past unnoticed. 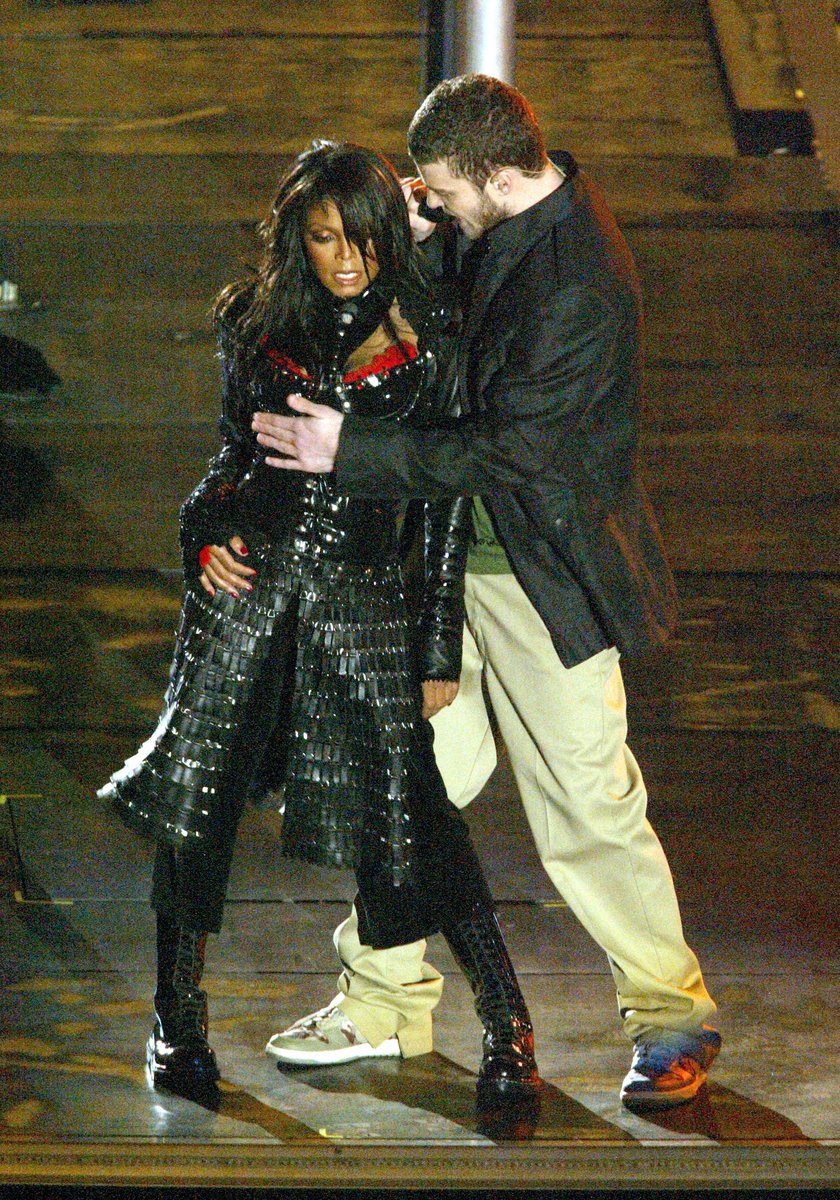 The infamous "Nipplegate" moment. Image: Getty.  The public, the media and the people who had invested millions of dollars into the performance needed someone to blame. And in this instance, Jackson shouldered most of it.

Twenty-four hours after the halftime performance, Jackson was forced to issue a public apology, absolving media partners MTV and CBS, the NFL, as well as Timberlake, of any responsibility.

“My decision to change the Super Bowl performance was actually made after the final rehearsal. MTV, CBS, the NFL had no knowledge of this whatsoever, and unfortunately, the whole thing went wrong in the end. I am really sorry if I offended anyone. That was truly not my intention," she said in a piece to camera.

Meanwhile, Timberlake joked about the incident during an interview with Access Hollywood. "Hey man, we love giving you all something to talk about!" he said.

The Federal Communications Commission received 500,000 complaints about the broadcast, CBS was fined $US550,000, and the NFL had to return the money they'd received from their biggest sponsor.

Jackson was dis-invited from attending the Grammys the following weekend. She was blacklisted by Viacom (MTV) and CBS Radio and forced to resign from an ABC film. She was never invited to perform at the Super Bowl again.

After a decline in sales, she departed Virgin Records and released one album with Island Records, before releasing one more album under her own label.

Jackson, one of the most prolific performers in the world, quietly watched her career slip away from her.

Meanwhile, Timberlake suffered little to no consequences to his career. He went on to release singles and albums; he collaborated with some of the biggest stars on the planet including Beyonce, Rhianna and Jay Z. He also enjoyed continued success in his acting career, starring in a bunch of movies including Bad Teacher, Friends with Benefits and The Social Network.

Fourteen years later, in 2018, Timberlake was even invited back to perform the Super Bowl halftime show.

In 2006, two years after "Nipplegate", Jackson sat down with Oprah Winfrey to talk about the infamous incident for the "first and last time".

She explained to Oprah that she didn't actually want to apologise at the time, but her management forced her to.

"It was an accident and management that I had at the time, they thought it was important that I did," she said. "I said before I sat down to say the apology 'why am I apologising?' it was an accident."

When asked whether she felt Timberlake had "left her hanging", she replied "to a certain degree, yeah".

For the past 17 years, Jackson's die-hard fans have attempted to reframe the story and attract the mainstream media's attention to Jackson's plight. Every year, on Super Bowl day, the hashtag #JanetJacksonAppreciationDay trends on Twitter.

In 2018, when Timberlake performed at the Super Bowl halftime show, the media momentarily reflected on the 2004 scandal and the different impact it had on the two stars' careers.

But it wasn't until last week that Timberlake formally apologised to Jackson for his role in the aftermath of the event.

When the new documentary, The New York Times' presents Framing Britney Spears, aired in the US, millions of fans demanded that Timberlake apologise for his role in Spears' downfall.

After a few days, Timberlake publicly apologised on his Instagram - to both Spears and Jackson.

"I specifically want to apologise to Britney Spears and Janet Jackson both individually, because I care for and respect these women and I know I failed.

"I also feel compelled to respond, in part, because everyone involved deserves better and most importantly, because this is a larger conversation that I wholeheartedly want to be part of and grow from.

"The industry is flawed. It sets men, especially white men, up for success. It’s designed this way. As a man in a privileged position I have to be vocal about this.

"Because of my ignorance, I didn’t recognise it for all that it was while it was happening in my own life but I do not want to ever benefit from others being pulled down again.

"I have not been perfect in navigating all of this throughout my career. I know this apology is a first step and doesn’t absolve the past. I want to take accountability for my own missteps in all of this as well as be part of a world that uplifts and supports. I care deeply about the wellbeing of the people I love and have loved. I can do better and I will do better."

While Timberlake's apology wasn't perfect, it has helped to bring Jackson's story back into the news cycle. In the shadow of Spears' similar experience, it's allowed us to reflect on that moment in history and the fallout.

It's sad to think that a simple mistake, a quick flash of a bare breast, derailed the career of one of the most visible and talented women in colour in the music industry.

In the last two decades we've only experienced a glimpse of the Janet Jackson we could have experienced if she wasn't publicly shamed and shunned and quietly forced to take the blame for "Nipplegate". She, and we, will never get those years back.

But hopefully in future before we "cancel" another prominent woman, before we get too caught up in the news cycle and the trending topic of the moment, we'll remember Jackson's story and think twice.

Reply
Upvote
2 upvotes
There is no way that was an accident. It was all too perfect and she was wearing some kind of nipple cover underneath.
M
mamamia-user-482898552 2 years ago

Reply
Upvote
@james b Again, as the article and others have already pointed out, it's not the stunt that was the issue: it's the vastly different way the two performers were treated (and acted) thereafter.
B
beachhouse84 2 years ago

Reply
Upvote
1 upvotes
Wow. I hadn’t thought of it like that. At the time it seemed like or the perception was that it had been a deliberate act to get publicity, a stunt. But the forced apology probably had a lot to do with that. Very unfair!
Resources
Very Peri
Skin
News
General
Opinion
True Crime
Politics
Sport
Explainer
Entertainment
Celebrity
Reality TV
Movies
TV
Books
Rogue
Royal
Lifestyle
Beauty
Fashion
Weddings
Home
Wellness
Health
Fitness
Travel
Food
Family
Before The Bump
Pregnancy
Baby
Kids
Teens
School
Parent Opinion
Work & Money
Money
Finance
Career
Lady Startup