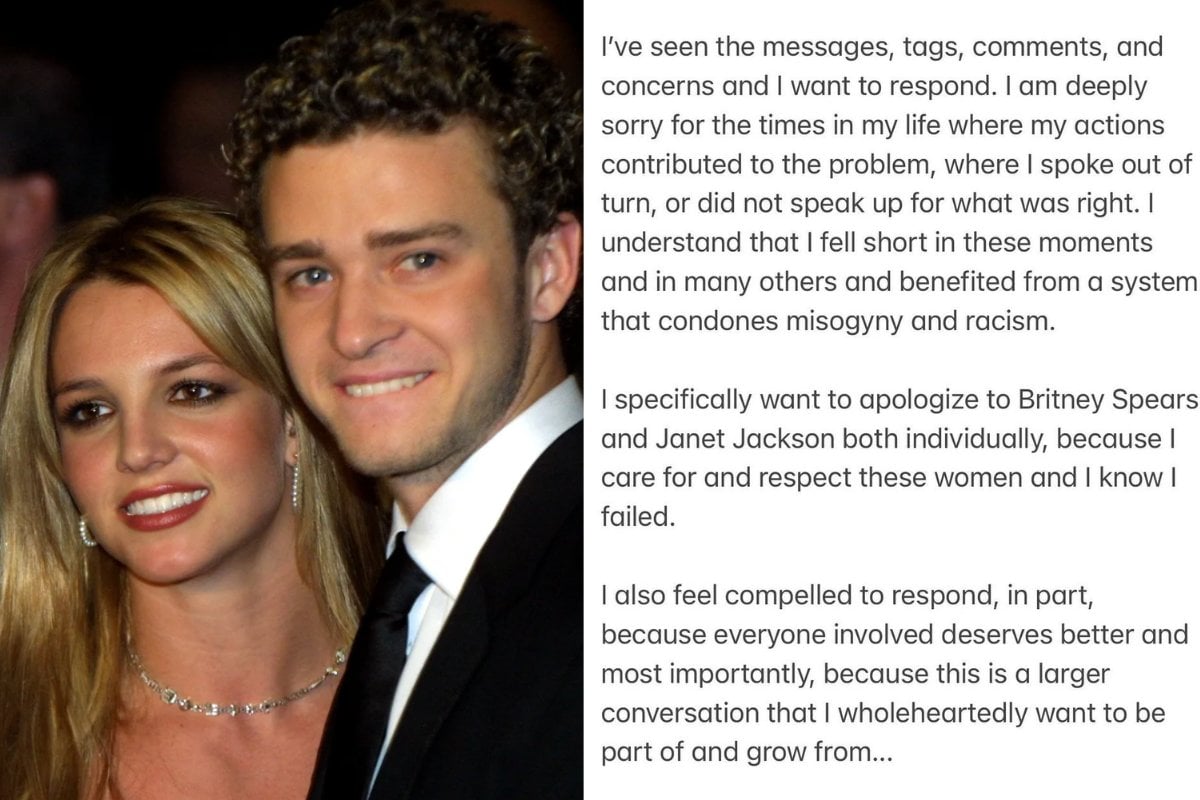 At the turn of the millennium, Britney Spears and Justin Timberlake's teen romance entranced tabloid culture like little else.

Timberlake, the pin-up boy-band member, and Spears, the pop-star phenomenon, were a match made in publicity heaven and, eventually, personal hell.

Nearly two decades on from the demise of their romance, the exes' love affair is back under the spotlight after the release of a new documentary, The New York Times Presents Framing Britney Spears.

The documentary, which is not yet available in Australia, has delved deep into the life and career of Spears and offered a fresh lens for examining how the singer was treated by not just the media, but also her close circle.

In light of the documentary, fans of the #FreeBritney movement are demanding several high-profile people apologise for the role they played in the treatment of Spears.

And on Saturday, one of them did.

In a statement issued via Instagram, the former NSYNC singer began, "I’ve seen the messages, tags, comments, and concerns and I want to respond..."

Here's how it played out, and why Timberlake has apologised to Spears, nearly 20 years on.

'Cry Me A River' controversy.

In the wake of their breakup in 2002, the tabloids reported rumours that Spears, then just 21 years old, had been unfaithful to Timberlake.

Timberlake seemingly confirmed this with his 2002 single 'Cry Me A River', with the famous lyrics: "You don't have to say, what you did / I already know, I found out from him / Now there's just no chance".

The music video - released only months after the breakup - paints the picture of Timberlake as a heartbroken lover who is seeking revenge over his cheating ex. A woman with a striking resemblance to Spears was cast to play the ex.

In an interview with Rolling Stone, Spears implied she felt betrayed by the 'Cry Me A River' music video.

"I think I was in shock, to be honest. I didn’t know what to say, what to do. That was the last thing I ever thought somebody might do. I was really shocked shitless. But you live and you learn...

"He called me up and asked me if it was OK... He called me up and wanted to supposedly get back together or whatever, but behind it was, 'And by the way, you’re in a video that’s coming out.' That kind of got slipped in. 'Don’t worry about it. It’s not a big deal,'" she continued.

"I hadn’t seen [the music video for 'Cry Me A River']. Then it came out, and I said, 'I should’ve freakin’ said no to this shit!' I was so like, 'Whoa. What is going on right now?' But, hey. And I said, “Why did you do this?” He goes, ‘Well, I got a controversial video.” And I was like, 'You did. Yay for you.' So he got what he wanted. I think it looks like such a desperate attempt, personally. But that was a great way to sell the record. He’s smart. Smart guy."

When she was a teenager, Spears famously said she was 'saving' herself for marriage. The world was obsessed with the singer's virginity, even more so because she was in a relationship. But Timberlake revealed after their breakup that he had, in fact, had sex with Spears.

During a radio interview for Star and Buc Wild Morning Show in 2002, Timberlake was asked: "Did you f*** Britney Spears?"

Timberlake laughed, before responding: "OK, I did it." 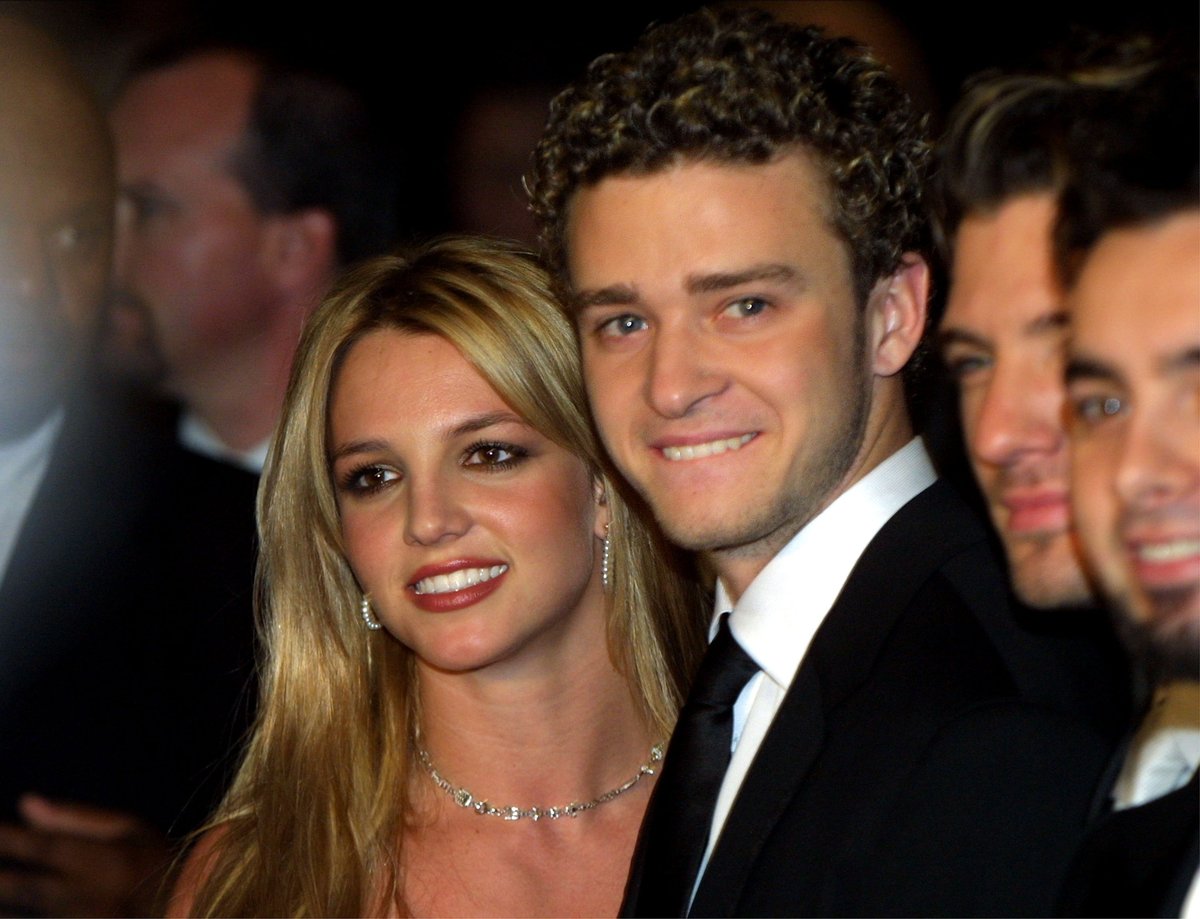 Britney Spears and Justin Timberlake in February 2002, one month before they broke up. Image: Getty.

In a subsequent interview with New York radio station Hot 97, the DJ said he would play Timberlake's then-single Like I Love You thirty times a week if the singer confirmed he had sex with Spears. Timberlake confirmed he'd had "oral intercourse" with her.

"I did it. I'm dirty. I'm in so much damn trouble, man. I'm going to get calls from my mother," he responded, laughing. A media storm ensued, with much of the commentary painting Spears as a 'sl*t'.

Re-visiting these interviews, the Framing Britney documentary accuses Timberlake of "weaponising" his breakup with Spears to launch his solo career, seemingly not caring if he 'sl*t-shamed' her along the way.

"The way that people treated her, to be very high school about it, was like she was the school sl*t and he was the quarterback," New York Times critic at large Wesley Morris explained in the documentary. 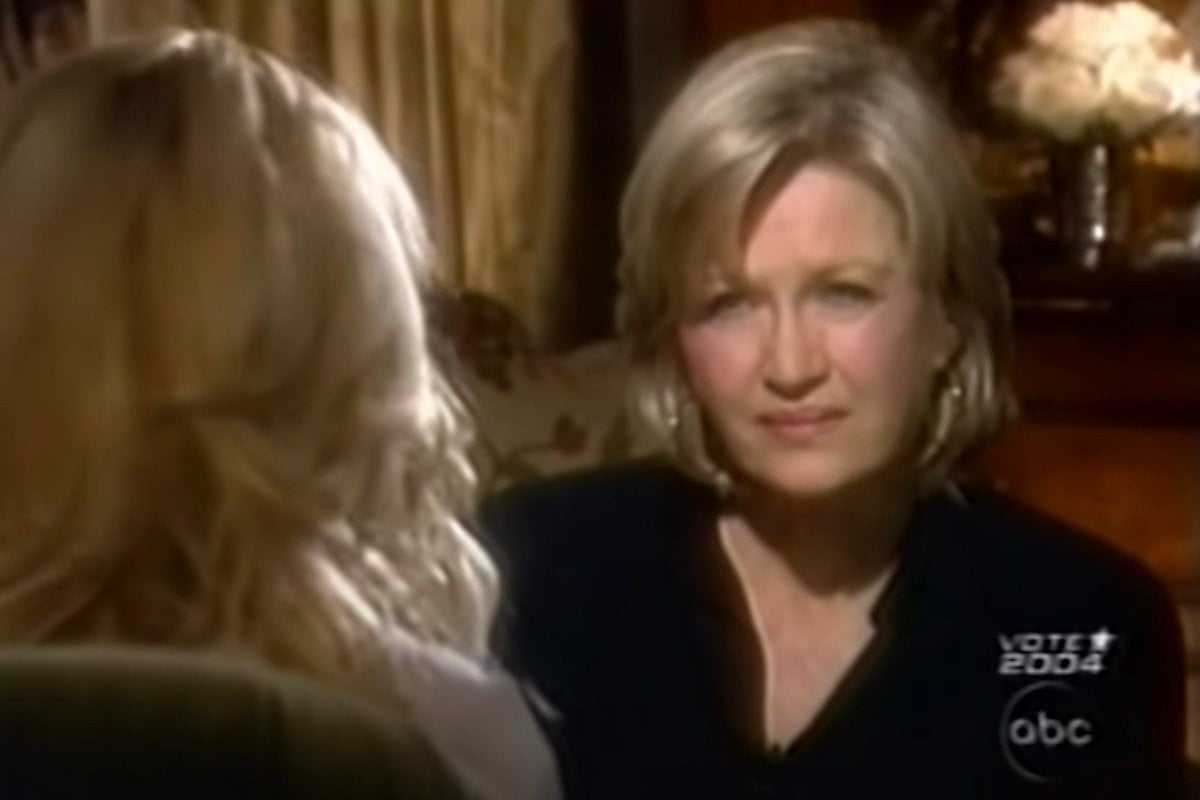 The infamous Diane Sawyer interview demonstrated the extent to which Timberlake had sucessfully peddled his 'wounded lover' narrative and made Spears the villain.

During the 2003 interview, which promised a "no holds barred" insight into the popstar, Spears was solely blamed for their breakup.

"[Timberlake] has gone on television and pretty much said you broke his heart," the journalist said, after Spears had previously asked to take a break when the topic of Timberlake was brought up. "You broke his heart, you did something that caused him so much pain, so much suffering. What did you do?"

“I was upset for a while,” Spears responded. “I think we were both really young and it was kind of waiting to happen, and I will always love him. He will always have a special place in my heart."

Sawyer went on to ask if the rumours that she was unfaithful to him were true.

Calls for Timberlake to apologise.

In light of the new documentary, social media was awash with calls for Timberlake, 40, to apologise to Spears.

Justin Timberlake has done a lot of shit that he needs to apologize for, but his treatment of Britney is at the top of the list. I want a public apology, and acknowledgement of the harm he’s done.

Watching this Britney doc and YES 2021 in the year we publicly acknowledge that Justin Timberlake LAUNCHED HIS CAREER BY SLUT-SHAMING BRITNEY. He completely capitalized on their private relationship. Dickhole. #FramingBritneySpears

Oh yeah if you already don't like Justin Timberlake, you are going to REALLY not like him if you watch this documentary.

I'll give it to him, he makes great music. Unfortunately, I don't think I can apply that same adjective towards his character.

"I am deeply sorry for the times in my life where my actions contributed to the problem, where I spoke out of turn, or did not speak up for what was right. I understand that I fell short in these moments and in many others and benefited from a system that condones misogyny and racism," he wrote.

He went on to apologise to both Spears and singer-songwriter, Janet Jackson, off whom he ripped a piece of clothing during the Super Bowl half-time show in 2004, exposing her breast.

"I specifically want to apologise to Britney Spears and Janet Jackson both individually, because I care for and respect these women and I know I failed.

"I also feel compelled to respond, in part, because everyone involved deserves better and most importantly, because this is a larger conversation that I wholeheartedly want to be part of and grow from.

"The industry is flawed. It sets men, especially white men, up for success. It’s designed this way. As a man in a privileged position I have to be vocal about this.

"Because of my ignorance, I didn’t recognise it for all that it was while it was happening in my own life but I do not want to ever benefit from others being pulled down again.

"I have not been perfect in navigating all of this throughout my career. I know this apology is a first step and doesn’t absolve the past. I want to take accountability for my own missteps in all of this as well as be part of a world that uplifts and supports. I care deeply about the wellbeing of the people I love and have loved. I can do better and I will do better."

The comments were filled with criticism that the apology was "too little too late" and that he'd lumped two apologies into one by discussing both Janet Jackson and Britney Spears.

Justin Timberlake thinks a short notes app apology is accountability for the pain he caused Britney and Janet......the audacity of men😭😭

I asked Justin Timberlake 5 years ago on Twitter if he would apologize to Janet Jackson.

He called me a "sweet soul" instead.

For those saying he made mistakes nearly 20 years ago, think again.

He knew what he was doing.

Justin Timberlake should’ve apologized to Janet Jackson separately. Lumping both Britney and Janet in that apology is saying that they both suffered the consequences in the same way when we all know they didn’t

Reply
Upvote
4 upvotes
Does anyone truly believe that 'wardrobe malfunction' with Janet Jackson wasn't completely staged? How her costume perfectly tore away to expose one breast with her nipple still covered?
M
mamamia-user-482898552 a year ago

Reply
Upvote
@james b It was the fallout afterwards, rather than the actual stunt. Jackson got panned, Timberlake didn't. Indeed, his career soared on the back of the castigation of others, and not once did he speak up about the double standards or to defend anyone. Instead, he kept his mouth shut and profited.
R
random dude a year ago