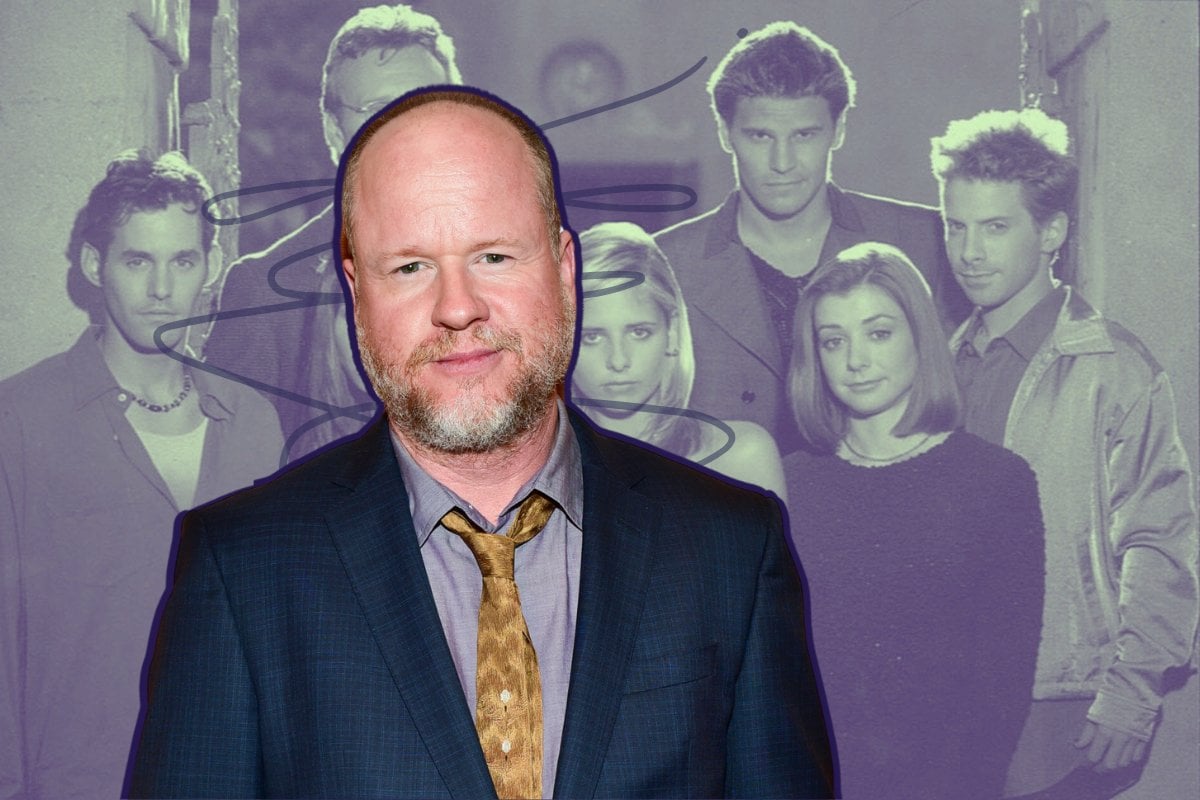 The cast of iconic 90s TV show Buffy the Vampire Slayer have come together to speak out about the "toxic environment" fostered by show creator Joss Whedon.

A chain reaction was set off by actress Charisma Carpenter, who starred in the first three seasons of Buffy plus four seasons of spin-off show Angel.

Watch: Moments from Buffy the Vampire Slayer. Post continues below.

Earlier this month, Carpenter issued a detailed statement on social media, saying she had kept quiet for nearly two decades about behaviour that "traumatised" her.

And now, a further 11 people who worked on Buffy and Angel have spoken to entertainment publication Variety, detailing what the outlet described as "a pattern of inappropriate, imperious and disparaging behaviour" by the once-celebrated producer.

What did Joss Whedon allegedly do?

"Joss Whedon abused his power on numerous occasions while working on the sets of Buffy the Vampire Slayer and Angel," she wrote.

"While he found his misconduct amusing, it only served to intensify my performance anxiety, disempower me, and alienate me from my peers. The disturbing incidents triggered a chronic physical condition from which I still suffer. It is with a beating, heavy heart that I say I coped in isolation and, at times, destructively."

Carpenter claimed Whedon made regular threats to fire her, called her fat when she was four months pregnant and pitted cast members against one another.

She said after accusing her of "sabotaging the show", Whedon "unceremoniously" fired her the following season once she'd given birth.

"Despite the harassment, a part of me still sought his validation. I made excuses for his behavior and repressed my own pain. I have even stated publicly at conventions that I'd work with him again. Only recently, after years of therapy and a wake up call from the Time's Up movement, do I understand the complexities of this demoralised thinking.

"It is impossible to understand the psyche without enduring the abuse. Our society and industry vilify the victims and glorify the abusers for their accomplishments. The onus is on the abused with an expectation to accept and adapt to be employable. No accountability on the transgressor who sails on unscathed. Unrepentant. Remorseless."

She said the memories "weighed on my soul like bricks for nearly half my life" and she wished she spoke up sooner, but muted herself "in shame and conditioned silence".

Buffy was a toxic environment and it starts at the top. @AllCharisma is speaking truth and I support her 100%. There was a lot of damage done during that time and many of us are still processing it twenty plus years later. #IStandWithRayFisher #IStandWithCharismaCarpenter https://t.co/WJAmDGm76C

"Buffy was a toxic environment and it starts at the top. [Carpenter] is speaking truth and I support her 100%.

"There was a lot of damage done during that time and many of us are still processing it twenty plus years later."

Buffy herself, Sarah Michelle Gellar, shared her own statement.

"I will not be making any further statement at this time. But I stand with all survivors of abuse and am proud of them for speaking out."

Michelle Trachtenberg, who played Dawn Summers, reposted Gellar's post and added her own comments, saying she felt brave enough now to share details of their experience.

"I am brave enough now as a 35-year-old woman to repost this. Because. This must. Be known. As a teenager. With his not appropriate behavior..."

Later, Trachtenberg added: "What he did was very bad. But we win. By surviving!"

Clare Kramer, who played the villain Glory on Season 5 of Buffy said on Twitter she stands with the women "who have the strength to come forward with their truth. A lot of this industry needs a reset".

On February 26, Variety ran an article detailing the claims of a further 11 people who worked closely on the production of Buffy and Angel.

These independent sources, who chose to remain anonymous, supported earlier allegations that Whedon verbally abused his colleagues, created a toxic and inappropriate atmosphere on set, and ran the productions like a high school clique — "making everyone aware of who was in and who was out".

Multiple people reported that Carpenter was clearly not among his favourites. One, who was in a senior role at the beginning of production, claimed Whedon had been "pushed" to cast her by the network, and would frequently pick on her. Another described his treatment of Carpenter as "mean-spirited" and "verbally abusive".

Three of the sources also corroborated claims made in 2017 by Whedon's ex-wife, Kai Cole, that he engaged in affairs with several women who worked on the shows.

According to the publication, no action was taken at the time by 20th Television, the production company behind the shows: "Multiple high-placed sources say if there were any complaints about Whedon on the sets of Buffy or Angel, they never rose to the studio level or became an official matter with human resources."

On his next major project, however, it was a different story.

Whedon is most heavily linked to Buffy and its spin-off, but the director has been involved in many other high-profile projects since the TV series including Marvel's The Avengers and Avengers: Age of Ultron and DC's Justice League.

In her statement, Carpenter referenced taking part in WarnerMedia's Justice League investigation, created after one of the film's stars, Ray Fisher, publicly accused filmmaker Whedon and producers Geoff Johns and Jon Berg of misconduct on set.

Fisher, who played Cyborg, made claims on Twitter in 2020. In July, he tweeted that Whedon's "on-set treatment of the cast and crew was gross, abusive, unprofessional, and completely unacceptable".

He said Whedon was "enabled" by former Warner Bros. Co-President of Production Berg and former DC Entertainment President and Chief Creative Officer Johns, who were producers on Justice League.

Jason Momoa, a.k.a Aquaman, spoke out on Fisher's side, claiming the cast were treated "shitty" during reshoots.

"I wasn't there with the guys when they shot with Joss Whedon - I had my own experience with [him], which wasn't the best one, but I took care of it there and when it happened I took it to the higher-ups and they took care of it. But I'm happy for Ray to go up and say his truth."

At a fan convention, Fisher said "if anything I said about that man is untrue, I invite him wholeheartedly to sue me for libel, to sue me for slander".

The investigation concluded in December 2020, after which WarnerMedia said "remedial action" had been taken.

Carpenter said she'd taken part in the investigation because it was clear to her Whedon was a repeat offender.

"It is abundantly evident that Joss has persisted in his harmful actions, continuing to create wreckage in his wake. My hope now, by finally coming forward about these experiences, is to create space for the healing of others who I know have experienced similar serialised abuses of power.

"Recently, I participated in WarnerMedia’s Justice League investigation because I believe Ray to be a person of integrity who is telling the truth. His firing as Cyborg in The Flash was the last straw for me. Although I am not shocked, I am deeply pained by it. It troubles and saddens me that in 2021 professionals STILL have to choose between whistleblowing in the workplace and job security."

Carpenter said she was scared about the future of her career for speaking out, but she could no longer remain silent.

"This is overdue and necessary. It is time."

Whedon has not yet responded to the claims from Carpenter or other Buffy cast members.

This post was originally published on February 11, 2021, and updated with new information on February 27, 2021.

Reply
Upvote
It’s been an open secret for years in the industry how awful he is. Glad to see that his ‘feminist ally’ act is finally crumbling.
J
james b 2 years ago

Reply
Upvote
2 upvotes
This is about the 4th article I've read on this subject today, and I still have no idea what it was that Joss Whedon has done that was so terrible. Was he difficult to work with? Did he expect too much from his young cast? Or was he actually abusive? Threatening and/or physically inappropriate? Did anyone speak out at the time? Has anyone ever sued him or attempted to have police charges laid against him?
It would be nice to get some real details.and not just a regurgitated story from a Newswire service.
L
laura__palmer a year ago