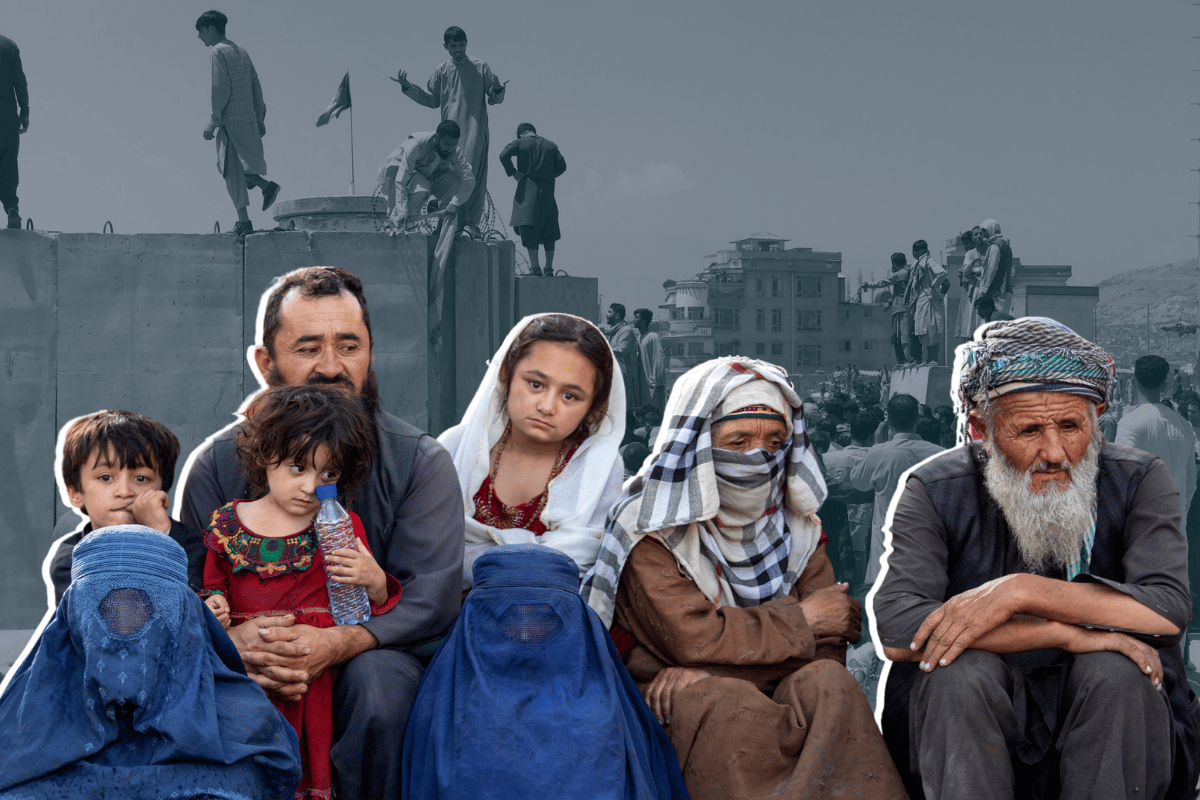 Right now, the world is watching as thousands of foreigners and Afghans desperately try to flee to safety.

Images of frightened children and footage of people climbing onto a plane fill our social media feeds, after the Taliban seized control of Afghanistan in just over a week.

On Sunday, the terrorist group moved into the capital of Kabul and the presidential palace, after Afghan president Ashraf Ghani fled the country.

The unfolding crisis places women and girls - in particular - in imminent danger, with fears that the Taliban could reimpose their brutal laws that eliminated women's rights before the US-led invasion in 2001.

While many of us might feel helpless watching on from home, there's a lot we can do to right now to help.

From supporting emergency aid on the ground to writing a letter to your MP, here are just some of the ways we can support people in Afghanistan.

CARE Australia are one of the first Aussie charities to dedicate a fundraising appeal to Afghanistan. They are planning to meet the needs of displaced Afghan families, as well as the local economy and livelihoods of host communities, and will provide hygiene kits to prevent the risk of COVID-19 transmission.

Women for Women International is a nonprofit humanitarian organisation that provides support to female survivors of war. On Twitter, the organisation said they are collecting donations to help women find safe places to meet and stay connected.

We’re closely monitoring the situation unfolding in #Afghanistan. Our team is safe. They are very sad, but calm, and sheltering in place. We are so proud of them and the work they do serving #afghanistanwomen and their families across the country. 1/6https://t.co/MQ0IDYoqRy

You can donate to Women for Women International here.

Afghanaid is supporting families and providing emergency assistance to men, women and children affected by the conflict.

You can donate to Afghanaid here.

The UN Refugee Agency is responding to the crisis by supplying emergency shelter, food, health, water, sanitation support and cash assistance. But stocks are running low.

Afghan Women and Children and Jalala foundation have teamed up to protect women and children fighting to survive after decades of war.

You can donate to Afghan Women and Children foundation and Jalala Foundation here.

The ICRC are "determined to stand by the Afghan people and help men, women and children cope with the unfolding situation", the director-general said in a statement today.

Since the start of August, over 4,000 people wounded by weapons have been treated at 15 ICRC-supported health facilities.

You can donate to the International Committee of the Red Cross here.

The humanitarian organisation provides aid to displaced families where they can, supplying necessary items like clothes, blankets and kitchen items.

Mamamia's news podcast The Quicky speaks to two experts to find out how the situation deteriorated so quickly in Afghanistan. Post continues below.

Write to your local MP.

Aside from donations, you can write to your local MP calling for the Australian government to accept Afghans refugees and support those who are already in Australia.

In an article published in the Sydney Morning Herald, Arif Hussein, a human rights lawyer with the Refugee Advice and Casework Service and Zaki Haidari, a refugee from Afghanistan, said Australia could help by implementing a one-off humanitarian intake of vulnerable Afghans.

"Especially minority groups such as the Hazaras and women and children who have been displaced by the war and are seeking refuge on the streets of Kabul," they wrote.

They also called for the government to grant permanent protection to Afghan refugees who are currently on temporary protection visas. This would allow "them to finally restart their lives without the prospect of being returned to Afghanistan".

The Refugee Advice & Casework Service have provided a helpful template for you to email to your local MP.