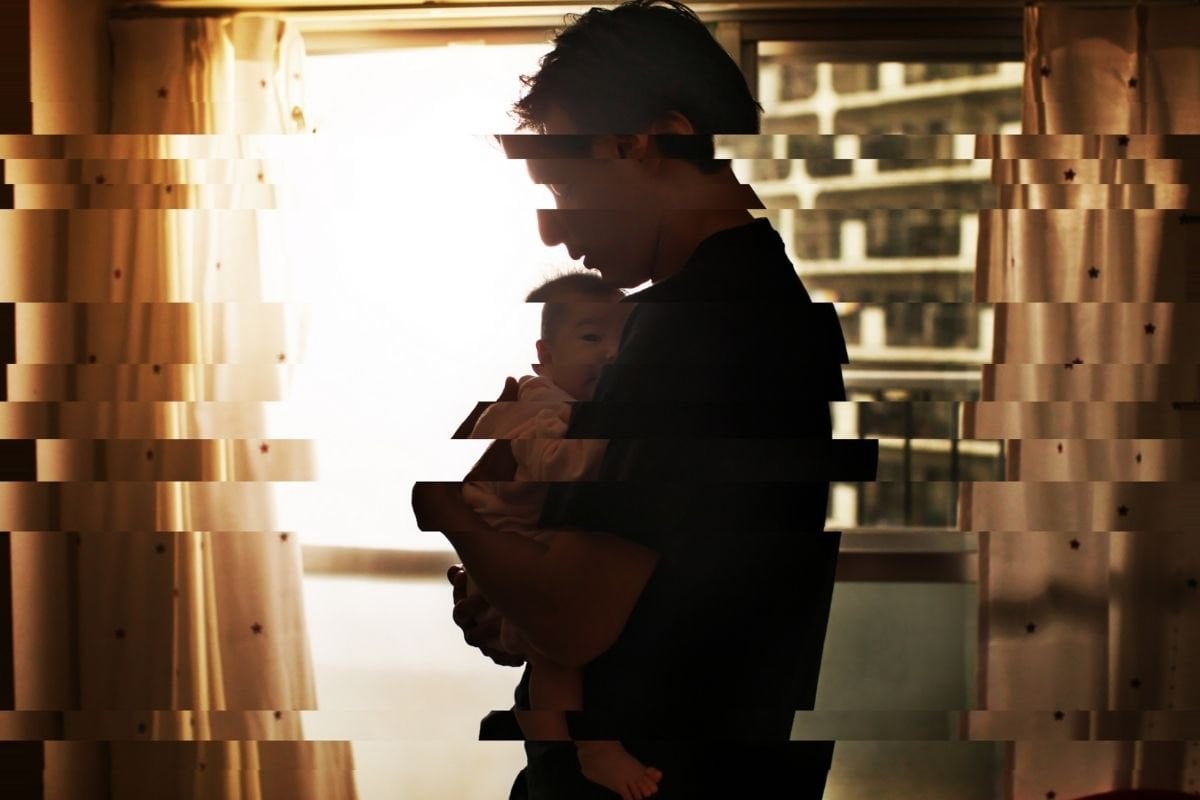 If the Taliban knock on Patrick’s* door, he has a plan.

“I've got a ladder to the top of the house,” he tells me while locked in his home near the city centre of Kabul where he lives with his Afghan wife and their one-year-old daughter.

“Once I get to the top, I will take the ladder with me and hide. I don’t think the Taliban would do any harm to my wife and daughter, because they are not foreigners. But I'm a target. I'm definitely a target in this country.”

Patrick is an Australian citizen. He travelled to Kabul, from Melbourne, two months ago because his mother-in-law passed away from COVID-19. Patrick’s wife was in Kabul by herself at the time.

“I really needed to be here to help her out,” Patrick explains.

What has happened since has simply blindsided them.

Listen to the latest episode of The Quicky, where the daily news podcast discusses the threat to women and girls in Afghanistan right now. Post continues after podcast.

In the past week, the Taliban has overthrown the democratic government of Afghanistan with shocking speed. On Sunday, the terrorist group moved into the capital of Kabul and the presidential palace, after the president fled the country. It comes after international troops, including from the USA and Australia, began withdrawing from Afghanistan in May after two decades of conflict, with very little progress in establishing a democratic country capable of standing on its own.

Patrick was at the bank when the worst news broke.

He was in a line with hundreds of people who, knowing the Taliban’s military offensive was escalating with unexpected swiftness, were all trying to ‘cash out’.

Patrick had been in line for hours when the bank’s doors shut. He looked around. People were rushing away. All the surrounding shops were closing their doors. When he asked someone what was happening, he was told military tanks were moving towards the city. Everyone was abandoning the streets. He raced home. He hasn’t left since. He was never able to get the money out. 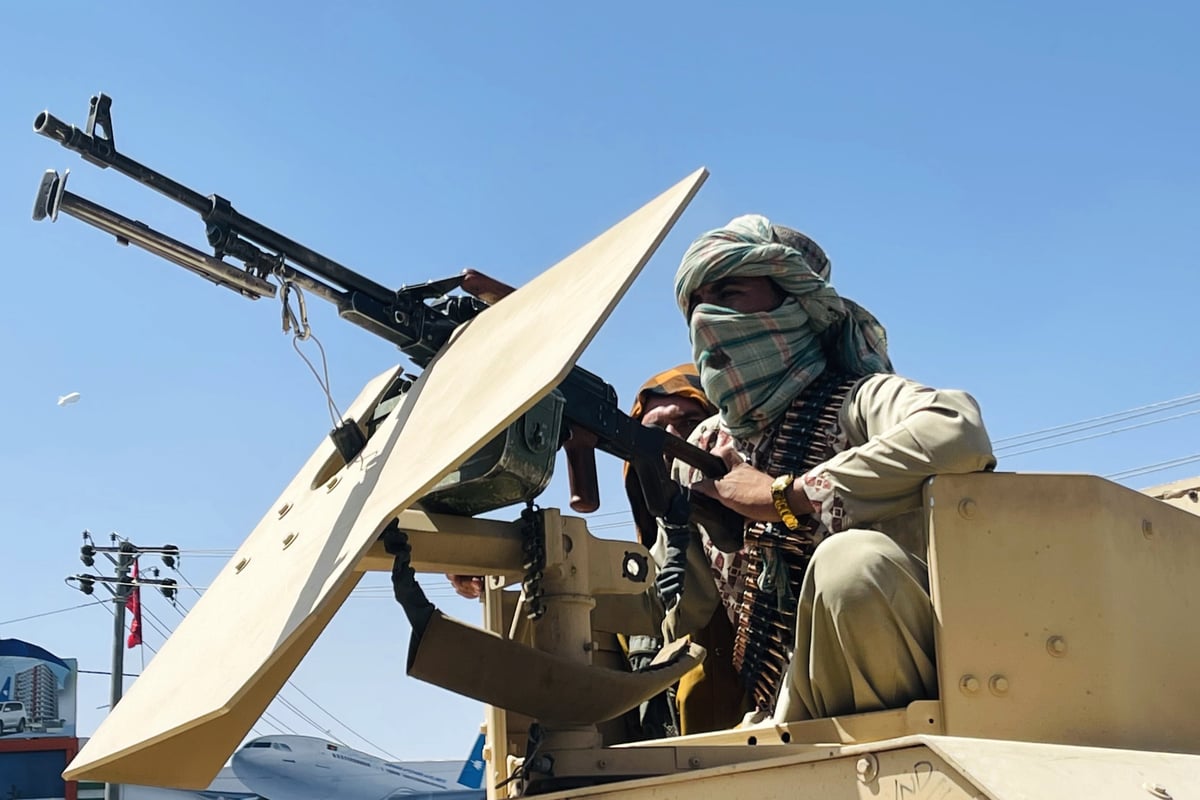 Taliban members are seen near Kabul International Airport as thousands of Afghans rush to flee the capital of Afghanistan on August 16, 2021. Image: Getty. He says his heart hasn’t stopped beating fast since he got home. He feels a pain in his chest, which he explains is a physical manifestation of the stress.

“I haven’t slept, even for a minute, since Sunday,” he tells me, his voice breaking.

When Patrick looks outside his window, he can’t see any Taliban on the streets. But he fears he’ll see them within the next couple of days.

His biggest concern is that he doesn’t know if he’ll be able to leave.

Patrick has been trying to get an Australian visa for his wife and daughter for the past 16 months. But every time they’ve applied, they’ve been rejected - despite the fact he is an Australian citizen and they are his family. In the past fortnight, he’s been trying to get a temporary visa to Pakistan for his family. But the Taliban’s sudden escalation prevented that.

So now he feels trapped in a country who has a terrorist group in power and who could persecute him, or worse, if they knew he was there.

At the time of speaking to me, on Monday evening, Patrick had not heard from the Australian Government since Saturday night - before the Taliban moved into Kabul.

He is constantly checking his phone for an email or call from the Department of Foreign Affairs and Trade (DFAT). Prime Minister Scott Morrison has said the Australian Government is working to bring Australians in Afghanistan home, including their families.

But if there is a plane coming to collect Australian citizens, Patrick is still deeply worried they won’t let his wife and daughter on the plane, because they are Afghanistan citizens. Plus, could he really even get them safely through the Taliban, to the airport, and onto the right plane, given the chaotic scenes we have all seen at the airport in the past day? He doesn't know.

“Whatever happens, it will happen to the three of us,” Patrick explains, his voice quavering. “Either we stay together, or we leave together.”

He would never consider leaving his wife and daughter behind under the reign of the Taliban, who he fears - like millions of others - will reimpose their brutal laws that eliminated women’s rights before the US-led invasion in 2001.

“I’ve heard that some girls as young as 12 have already been forcibly married to Taliban fighters,” Patrick shares, which is consistent with multiple reports.

During their previous regime, girls were blocked from attending school, women were banned from employment and they could not appear in public without full body coverings and male escorts. Those who refused, were publicly flogged or executed.

Already, the Taliban have signalled their intention to deny girls' education past the age of 12 and to forbid female employment, despite also claiming in contradictory statements that they would ensure women can participate in public life under their new reign.

Ultimately, it’s not a safe place for women. And Patrick would never entertain the thought of leaving his wife and daughter behind.

So until he hears more from DFAT, Patrick waits in fear, with nothing more than a ladder to help him escape.

*Name has been changed for safety reasons.