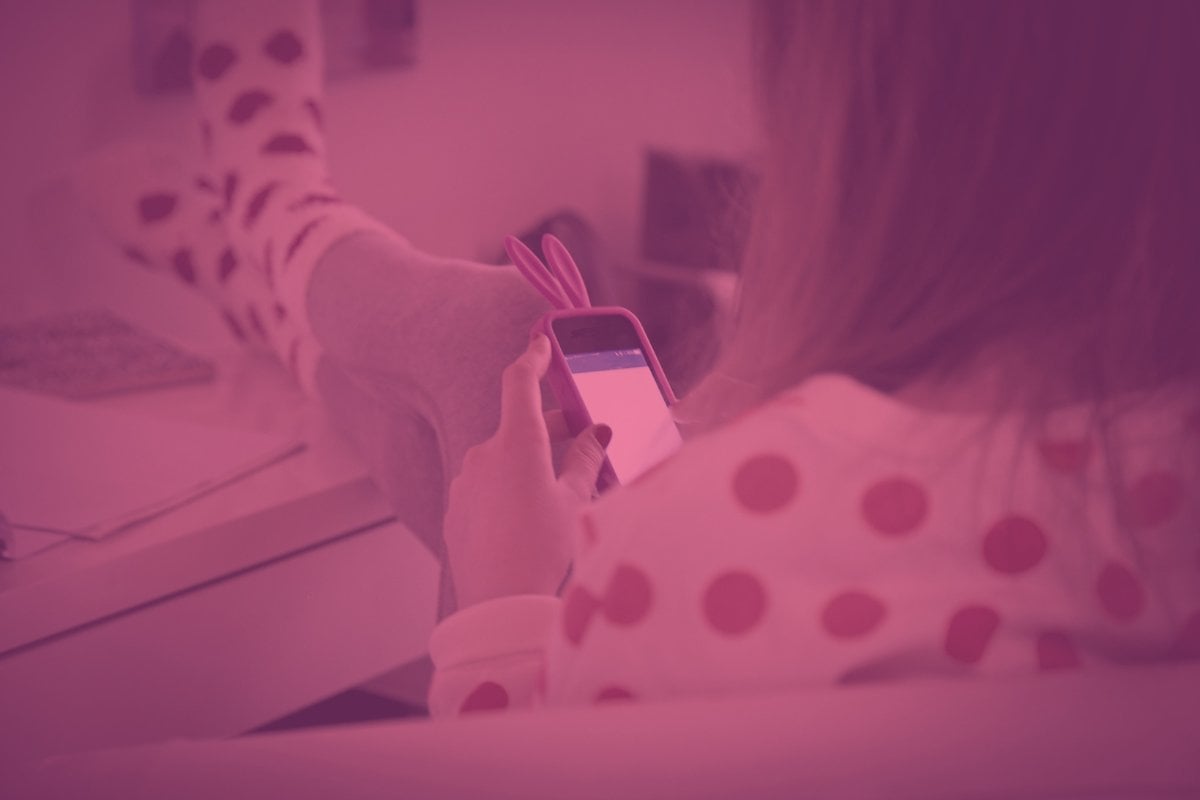 If you are a parent of a teen or pre-teen, then you have probably had a conversation about when they can have their first mobile phone.

While some parents are worried abut the impact of social media, others are happy to be able to track their kids on the school bus to know they are safe.

Mamamia asked 16 women to share their thoughts on what age and stage was right for them and their child to become phone owners.

"I just had this conversation with my 17-year-old niece to figure out when my nearly eight-year-old daughter should get a phone and access to social media. My niece said she didn't have a phone until she was in year 7, but used her friends' phones to start her own social media accounts when she was in year 4 or 5. I feel like if I hold off too long, my daughter will find a way if her friends are doing it too, so I may as well allow it younger when I can help her learn how to be safe on it. So maybe age 10?"

"My eldest got a phone when he was 10, which was a little ahead of our original schedule. We planned on waiting until he went to high school but lockdown happened and we wanted to help him maintain connection with his friends, who all had phones! He is now 12 and still not on social media. He loves a YouTube video though, so we have set up limits on his screen time."

"Both of my kids got a phone when they went to school (or anywhere) on their own, around grade 6 (11-12 years old). They both started off with a 'brick' phone, so they wouldn't be able to walk and scroll social media."

'We got our 12-year-old a phone when she started high school so we could contact her if pick up plans changed or she could contact us if an issue arose if she was on the bus. She does not have social media, only basic text and call options. When she turns 13, we will have a social media chat and decide what she can have and the limits."

"We got our son a phone at the end of year 6, so that it was less of a novelty going into year 7 (high school). The main reason he even got it for year 7 is because he started travelling by bus to school and my ex and I have shared care, so we could remind him where he needed to be. I believe that it helps with friendships and group stuff as long as you monitor it all, as it has its downfalls as well. I also have Life 360 on him so we can track him on weekends!"

"My kids are in year 5/6 and we have a 'family phone' that stays on the charger and they can take it when they need it if they're going to a friend's house or sporting activity and they may need to contact me. It doesn’t have any social media apps. It only has a prepaid Aldi sim and we barely have to recharge it because they only use it occasionally."

Listen: How to reduce your family's screen time on podcast Help! I have a Teenager. Post continues below.

"My boys got a phone the Christmas between year 6 and year 7. They are now in years 7 and 10. My youngest forgets to charge it and uses it mainly for watching TikTok videos. When he was in year 5, we got him a smart watch as he was riding his bike to school and we wanted him to have a way to contact us and vice versa."

"From memory, we gave our kids' phones when they started high school, but my tip is if you do get one for them to use, make sure they know it is YOUR phone, not theirs. Don't give phones as birthday or Christmas gifts. It's your phone you are allowing them to use and you can take it away, monitor apps, use blockers, etc. It's much harder to do that if it was a gift, that they rightfully see as their own."

"I'd say what many people miss is the difference between having a phone and being on social media. Both my children got a phone for year 5 when they changed schools and needed to communicate transport issues. The older one is now in year 7 and able to text her friends but does not have, nor has asked for, social media."

"Our youngest got a phone when she was in year 6 (now in year 7) but we’ve recently taken it off her because she was getting bullied online and at school. The biggest issue is social media, especially snapchat and TikTok and it was hugely affecting her mental health. She doesn’t miss it and realised that she actually doesn’t need it. My boys are fine with their phones, but they are older, so maybe it’s just a girl issue?"

"I’m 29 this year and I didn’t get my first phone until I was 13-14 when I got my first job. I had to pay for the credit for the phone and if I broke my phone, I had to buy it myself. If I didn’t have the money for a new one, I had to work out a payment plan with my parents and they charged interest and late payment fees if I didn’t meet them on time or skipped too many work shifts. It taught me a lot and when I have kids, I'm going to teach them that too."

"I always thought I wouldn't get my kids' phones until they were teenagers with the capacity to understand the expense and responsibility, then I changed my mind. I was going to get my son one when he started high school next year, but then he started riding to and from school on his own a few months ago. I decided I wanted him to be able to contact us when he arrives and leaves, so we got him a phone, but he uses it purely for travelling to school. He is 11 years old."

"All my kids got a phone in year 5 or 6. My best advice for other parents, know your technology, as you can set parental controls on most phones. These days, if a kid doesn’t have a phone in high school that would seriously affect their social life. Kids connect through games and apps and group chats with their friends."

"We got our daughter a phone for high school. She had access to one the year before, but only at home and it didn't have its own number, so was just for games. Now she's as addicted as the grown-ups in the house..."

"Ours got their first phone the Christmas before starting high school. It was an old phone so they could get used to looking after it without the stress of it being a huge expense because they will drop it and forget it sometimes. They also contributed financially to give them some ownership and create that sense of responsibility."

"We got our daughters a phone for high school as they would be taking a bus. I just felt better knowing they could call me if they missed it."

When did you get your child a phone? Let us know in the comments below!

Laura Jackel is Mamamia's Family Writer. For links to her articles and to see photos of her outfits and kids, follow her on Instagram and TikTok.

Reply
Upvote
Mine both got iPhones in year 5. These days so much socialisation and event planning happens on messages and face time they would miss out without it. Especially during all the lock downs etc. plus that way I can contact them whenever I need to. It’s also a great discipline tool - best lever I have to enforce rule breaking is device confiscation.
K
katp 2 months ago

Reply
Upvote
1 upvotes
Three older teens and none of them have phones although they could all afford one. We have a Nokia "dumb phone" they take if they need to change plans but we all just get along like it's the 90s. A friend asked me how I contact the kids and after a moment I realised "I don't!". All happy, no bullying and no complaining even when they were younger and the only ones without phones. Now they are old enough to see what a drain it is on wellbeing and socialisation they seem to be really happy with the choice.
They all walk/ed to high school though so never had to negotiate transport at a young age, though I like to think they could have managed it without a phone too
M
mb1111 2 months ago

Reply
Upvote
@katp I walked to school with my brother my whole life and managed without a phone.  It was different back then because no expected to contact you within the day. I started going to uni 60km from home. I would leave at 7am catch transport and not get back until dark and never contact my parents throughout the day.  It was so different to parents expectations these days. If my kids go to a friends house I just have the parents phone number.  If I need to contact them at school I just call the school.  My kids are not teenagers, so it’s a bit simpler - no social media, no chat apps etc. I guess they will have one at some point but I’ll push it out as long as possible.
K
katp 2 months ago

Reply
Upvote
@mb1111 I think I would worry more if they had phones - whereas I don't expect to hear from them but just expect them home when they tell me they'll be home. I can imagine stressing out if I tried to contact them and couldn't etc
Sometimes they email me from their laptop - we aren't totally unplugged or anything. This is just where we accidentally ended up having held out against smart phones as long as possible.
Resources
Very Peri
Skin
News
General
Opinion
True Crime
Politics
Sport
Explainer
Entertainment
Celebrity
Reality TV
Movies
TV
Books
Rogue
Royal
Lifestyle
Beauty
Fashion
Weddings
Home
Wellness
Health
Fitness
Travel
Food
Family
Before The Bump
Pregnancy
Baby
Kids
Teens
School
Parent Opinion
Work & Money
Money
Finance
Career
Lady Startup