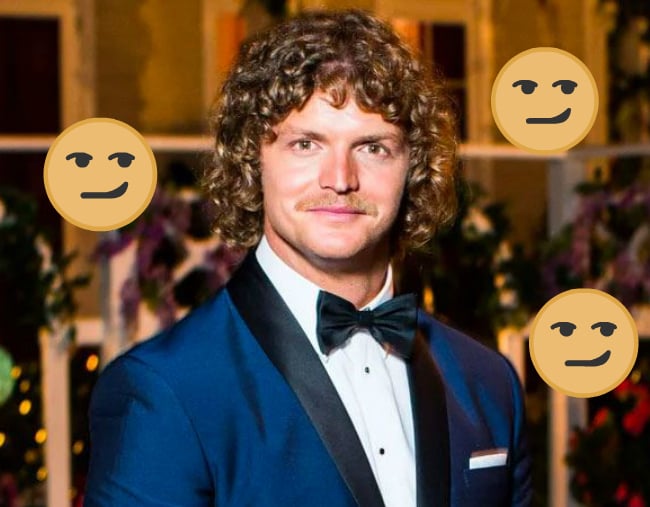 Last night Nick Cummins honey badgered onto the television screens of Bachie fans around the country.

We were more excited than a barmaid on a Saturday night. Giddier than a stubby holder on Christmas day.

Heck, we were excited. So excited that we only just noticed this sneaky little person in the background.

This man is certainly not a contestant.

He kind of looks like the baby of Adam Levine and Matty J but we can't be certain.

He also isn't Nick Cummins or Osher, who are the only men we are happy to see on this television show, so who is he?

The people think they know who he is...

This mysterious man appeared as drama was unfolding on the show, so it seems likely that he was a producer. We suspect he was whispering things like "You should confront her about it" or "go jump in the pool" into the ears of the poor women as they pour them another glass of champagne on an empty stomach.

The people of Twitter are convinced that this mystery man is in fact a waiter, and they might be right. He is wearing a white collared shirt, after all.

Okay, Osher has it tough and probably needs some emotional support on the show. Nick Cummins kind of seemed like he didn't want to be his BFF but it's absolutely fine because this man is probably his BFF, brought in especially to back up his right hand man.

While many think this was an editing fail, we think otherwise.

During Bachelor In Paradise, viewers kept catching glimpses of producers in action during that season and bloody loved it (who doesn't love a "behind-the-scenes" feel?). So we're betting that this man was popped in on purpose, and that this season of The Bachelor will operate with a similar tactic. Watch this space.