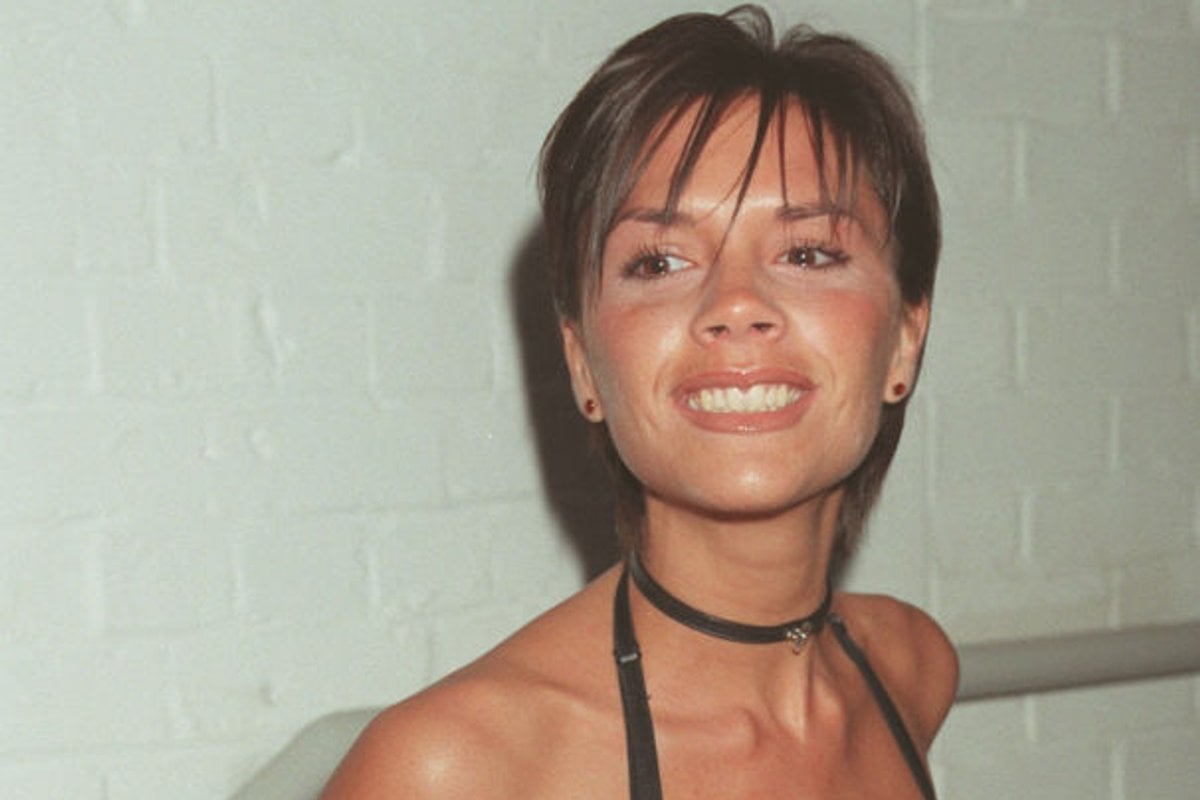 This post deals with eating disorders and could be triggering for some readers.

In case you needed a reminder that the 90s and noughties were not very kind to female pop stars, here's the story of how Victoria Beckham aka Posh Spice was weighed on live television, 12 weeks after giving birth - and no-one batted an eyelid.

Part two of the Spice Girls documentary Spice Girls: How Girl Power Changed Britain takes an in-depth look at how the UK tabloid media treated the women during their height of fame, and how their appearances were constantly scrutinised.

One of the most disturbing instances happened in the year 1999 on British show TFI Friday. During an interview with Beckham in front of a live TV audience, presenter Chris Evans (not to be confused with American actor Chris Evans) congratulates her on her weight after giving birth to her first child.

"Is your weight back to normal?" Evans asks.

"Yeah, it is," Beckham replies.

"Can I check? Do you mind?" Evans stands up and brings out a scale for her to stand on.

"Oh no, you did this to Geri too, didn't you," Beckham groans. (Yes, he did indeed also ask Ginger Spice to stand on the scale during her interview earlier in the show.) "This is horrible!"

She stands on the scale with trepidation. It reads 8 stone (50kg).

"Eight stone's not bad at all!" Evans says as the audience bursts into applause.

The clip, which of course features in the new Spice Girls documentary, has been roundly criticised by, well, pretty much everyone.

Watching the #SpiceGirls documentary on C4 - and I knew this, but wow 90/00s media was savage and just unbelievably woman hating. Men hating women and women hating women.

12 weeks after giving birth, Victoria Beckham was made to stand on a set of scales on national television by Chris Evans. One of the most shocking things I’ve seen in TV. I felt sick.
Those girls got hounded 😭 #spicegirls #chrisevans

Chris Evans bringing out a scale on TFI Friday to weigh Victoria Beckham after she gave birth is... 🤯🤯🤯 72 Films’ dissection of British media in “Spice Girls: How Girl Power Changed Britain” for @Channel4 is so powerful and makes me want to scream.

In the years since, Beckham and her fellow Spice Girls have become more vocal in their treatment by the media and how the pressures of trying to be perfect led to eating disorders and mental health issues, including anxiety and depression.

Only recently did Beckham's husband David comment on how his wife has eaten the same meal of grilled fish and vegetables for the past 25 years.

The misogynistic and sexist behaviour that female celebrities like the Spice Girls had to deal with is almost beyond comprehension, but while we see less of it now, that does not mean it has disappeared. Women in the entertainment industry still get scrutinised on their appearance - and so do women from every other industry.

We can only keep calling out this unacceptable behaviour in the hopes that one day, we won't have to.

For help and support for eating disorders, contact the Butterfly Foundation's National Support line and online service on 1800 ED HOPE (1800 33 4673) or email [email protected] You can also visit their website.

Reply
Upvote
What I don't understand is why they agreed to this in the first place. I'm old enough to remember the Spice Girls in their heyday - they weren't shy, retiring little girls who got pushed about. Even in the 90's, weighing someone on TV would have been seen as crass. So why did they allow this to happen?
News
General
Opinion
True Crime
Politics
Sport
Explainer
Entertainment
Celebrity
Reality TV
Movies
TV
Books
Rogue
Royal
Lifestyle
Beauty
Fashion
Weddings
Home
Wellness
Health
Fitness
Travel
Food
Parents
Before The Bump
Pregnancy
Baby
Kids
Teens
School
Parent Opinion
Work & Money
Money
Finance
Career
Lady Startup
Relationships
Sex
Dating
Separation
Friendship
Family
Real Life
Couples