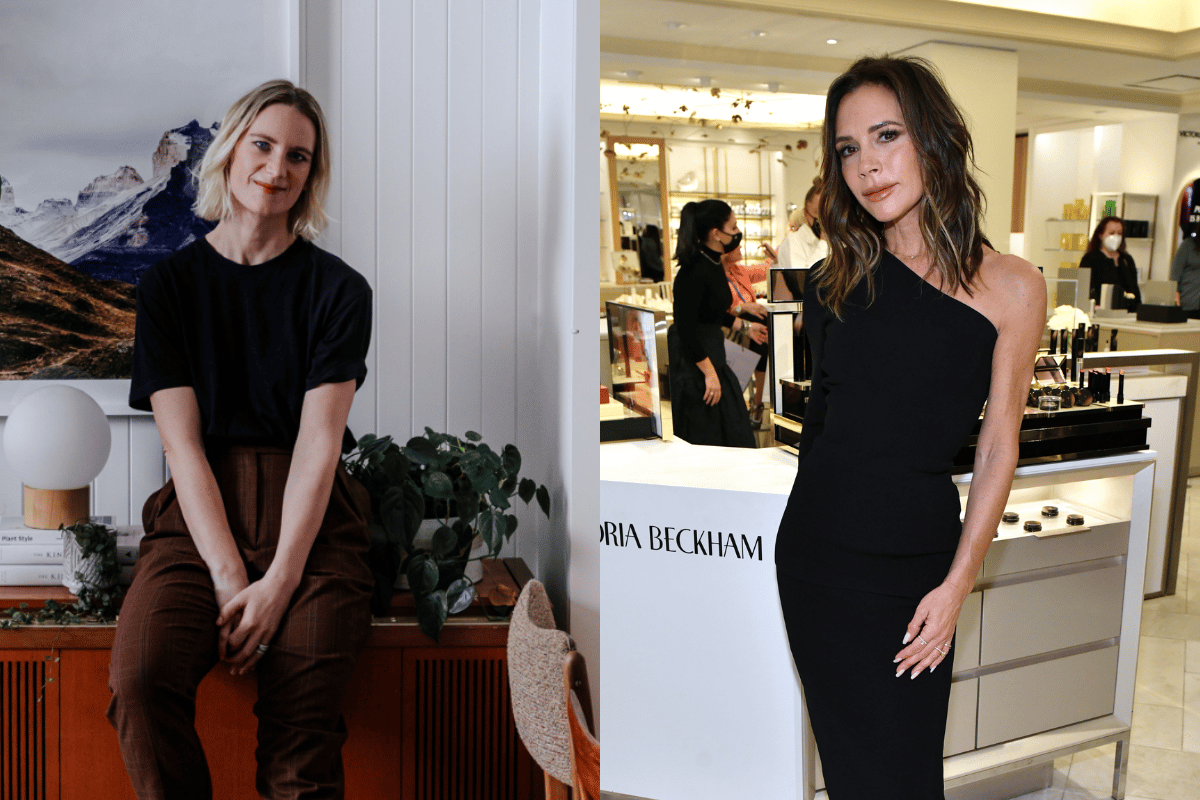 This post discusses eating disorders and may be triggering for some readers.

The other day David Beckham gave the world an insight into the much speculated about eating habits of his wife, Victoria Beckham.

A reality that is annoying to Beckham who asserted that one of his favourite days was when Victoria tasted something from his plate when she was pregnant with their youngest child, Harper.

It’s official. Now we know for sure. Fish and vegetables every day, for 25 years.

Watch How to improve your daughter's body image. Post continues after video.

The intrigue around what Victoria Beckham eats in a day comes from society's obsession with thinness, particularly in the celebrity sphere.

But why and how can we use this opportunity to have higher-grade conversations to support the one million Australians living with an eating disorder; of whom (according to The Butterfly Foundation) just 25 per cent of seek help.

Reports on these unscripted and seemingly flippant remarks about Beckham life BTS has circulated every pop-culture news outlet the world, and I’ve noticed two main themes dominating the conversation:

Thanks to my own lived experience, I can tell you why this type of thinking is unhelpful.

Firstly, with regard to whether or not Victoria Beckham has an eating disorder, here’s the thing…

The way someone eats and whether it is or isn’t an eating disorder can only be determined by that person together with a medical professional based on how much personal anguish it causes them and the limiting impact it has on the way they live.

It has nothing to do with how they look, or necessarily even how they approach food, but everything to do with matters of the mind. Eating disorders are not about food. But food becomes complex.

For most people suffering from an eating disorder it is an invisible illness to others looking in. Anyone can have an eating disorder. All shapes, all sizes, all ages, all stories, all genders and socio-economic backgrounds… anyone.

I’ve lived with an eating disorder for most of my life. I’ve tried everything to release its hold on me, Mostly though, I just manage it as best I can, some days better than others; just like many living with chronic illness or variations of mental ill health.

I look healthy. I’m high-functioning. In fact, work, competitive sport and playing the piano are all coping strategies for me and help me to remain well. The way I see it, these things are part of my treatment plan. I don’t appear to be someone legitimately co-existing with an eating disorder.

I think it’s important to progress the understanding of the illness, because for the most part you can’t actually tell if someone has one or not. They are not defined by someone’s weight or approach to food and they are not just a ‘feminine’ illness like many perceive them to be.

I’m looking forward to the day we really change this one-dimensional conversation around who might have an eating disorder, and how it might manifest in reality so that we open up the possibility for more people to come forward even if they don’t fit the stereotype of what and whom might be living with what is a deeply personal, often private illness – the great unseen.

We can speculate all day long about whether Victoria Beckham, mum of four/fashion designer/business empire owner/and sometime ‘Wannabe’ singer is battling an eating disorder or not. But we’ll never know how much or how little the way she eats is impacting her thoughts and her life in a challenging way until she decides to talk about it herself.

So this brings me to the other theme that’s circulating as a result of David Beckham’s un-scripted reveal.

That this approach to food is in someway a simple example of discipline or even some trivialised diet that’s carefully curated to optimise time and efficiency.

This couldn’t be further from reality for those living with an eating disorder. I too am someone who consumes the same items from a short list every day.

Trust me, it’s not a lack of knowledge around what is and isn’t an optimal approach to nutrition. Remaining weight restored is only one half of the challenge behind the suffering from an eating disorder. The other half is managing the mind.

For me, keeping food choices on auto-pilot is simply a way to manage the impact of the illness on myself and those around me. To reduce the risk of unravelling or the wheels falling off. To stay well in the face of an invisible illness that never gives up. It should never be compared to an ideal or aspirational way to eat. It’s not. It’s survival, nothing more.

David Beckham mentioned his frustration with Victoria’s lack of food spontaneity, but masquerading as a kind of ‘normal’ at group food gathering times for those living with the complexities of an eating disorder can be a daily challenge that takes a great deal of courage and strength to overcome. And I want to save a pat on the back for all of those who do, who show up despite it all and who are often mis-understood.

The reason I eat the same way every day is to simply minimise decision fatigue and resulting dysfunction. It’s to free up space in my mind, so that I can participate well in and enjoy life. It’s as simple as that. A choice to live compared to revving in neutral, pinned down by spinning food chatter. So a repeating menu is really just a choice between being over-burdened by thoughts or sticking to what I know I can manage right now.

I once got brave and shared with a friend that I live with an eating disorder. When I described some of my behaviours around food that well-meaning friend flippantly dismissed it as being conscientious, ‘just like her’ she said.

But while her approach to food may on the surface have sounded to be similar; our experiences couldn’t be more different. Eating disorders are not a form of discipline or conscientiousness or even some diet that you’ve carefully curated.

Eating Disorders are not a lifestyle choice. They are a complex mental illnesses that can impact anyone. They’re rarely about food, and develop from a combination of biological, psychological, and socio-cultural risk factors. Having an eating disorder is exhausting and can be all-consuming and impact all facets of your life including day-to-day activities.

While choices can be made towards recovery, eating disorders are not a choice and kind of like an unwelcome resident that spits an uncivilised barrage of abuse at that those living with them. To trivialise what living with an eating disorder is like by comparing it to some sort of lifestyle choice is to really undermine the torment that eating disorders inflict on those impacted by them.

Eating disorders are debilitating, sometimes even fatal; but sometimes they can be managed with little disruption to daily existence; and one way many manage myself included is to eat almost the same way every day.

Sure, an unwillingness to deviate from the daily meal plan might be frustrating to loved ones, but to that I would say it is simply a strategy to neutralise the impact of living with an eating disorder and to remain weight restored, as high functioning and as present as possible.

Jade Roberts is a mum of three, small business owner, writer and passionate advocate for body inclusion in the fashion media; dedicated to encouraging meaningful conversation that raises awareness and leads to better support for those impacted by eating disorders.

E
everyone has issues 4 months ago

Reply
Upvote
Before I read this, I thought I had an understanding of eating disorders but this showed me I really had no idea what it feels like and how much mental effort is involved in living with it. I wish it would be easier for you but hopefully you know you’re doing an amazing job just showing up for the challenge.
M
Melissa 4 months ago

Reply
Upvote
I eat the same thing Monday to Thursday. Funnily enough dinner is salmon with veg or salad haha! I do it for 2 reasons - 1. It is less stressful not having to decide what to eat each day. 2. It is healthy, easy to prepare and cost effective. As the article notes, the main reason is really just reducing your mental load each day. On the weekend however, anything goes!

Reply
Upvote
@Melissa  it's not all that different to Steve Jobs wearing the same black-turtleneck-and-jeans outfit every day, is it. One less decision you have to make. Not my choice at all, but I can see how it would work for some - especially for the type of person who maybe isn't all that interested in food, and see it simply as fuel for their bodies.
C
cat 4 months ago