Prime Minister Scott Morrison has today revealed that Australia will provide "lethal aid" to Ukraine via NATO, alongside America and the United Kingdom.

"I've just spoken to the Defence Minister and we'll be seeking to provide whatever support we can for lethal aid through our NATO partners, particularly the United States and the United Kingdom," he said this afternoon.

Australia has already committed to send military equipment, medical supplies and provide cybersecurity assistance to Ukraine, but had ruled out sending troops.

The government has not said how much money it will send.

Ukraine's President Volodymyr Zelensky has been a figure of stoicism and defiance since Russian President Vladimir Putin ordered a "military operation in eastern Ukraine" following months of increased tensions.

Even amid the very real threats to his own life - Zelensky himself saying he is Putin's "number one target" - the Ukrainian President has vowed to stay in his country and fight. 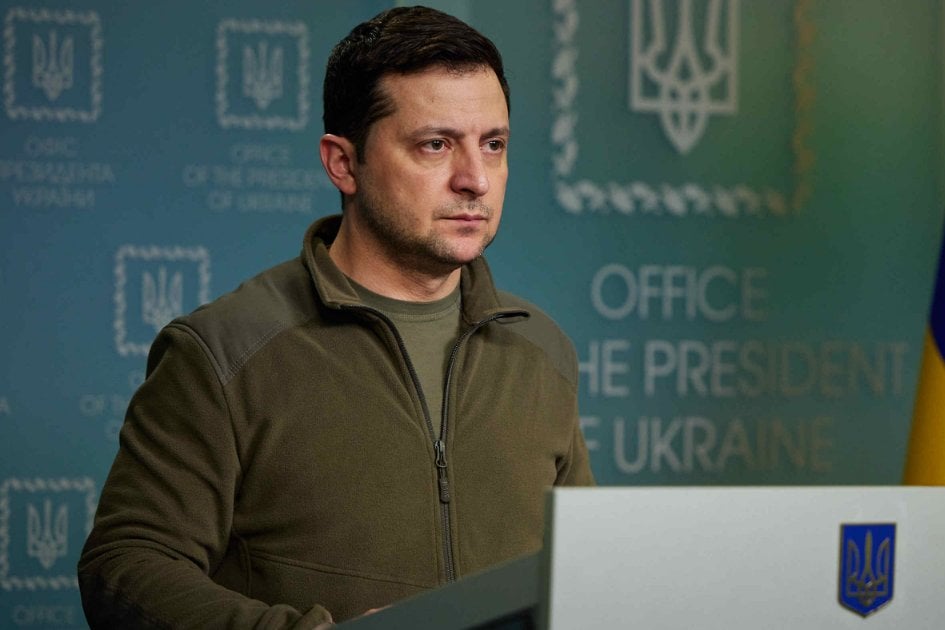 But what some may not know is this isn't the first time Zelensky has 'played the role' of a powerful leader. In 2019, he had a starring role as President on a popular Ukrainian television series. And only three years later, Zelensky is now leading Ukraine through war.

You can read more about Volodymyr Zelensky here:

Russian forces have blown up a gas pipeline in Kharkiv, the country's second-largest city, the Ukrainian president's office says.

Ukraine's State Service of Special Communication and Information Protection warned the explosion, which it said looked like a mushroom cloud, could cause an "environmental catastrophe".

It advised residents to cover their windows with damp cloth or gauze and drink plenty of fluids.

The footage shows a gas pipeline on fire in Kharkiv after a Russian attack.

Ukraine's top prosecutor, Iryna Venediktova, said the Russian forces have been unable to take Kharkiv, where a fierce battle is under way.

The city of 1.5 million is located 40km from the Russian border.

From Saint Petersburg to Australia: Anti-war rallies across the world.

Anti-war protestors are rallying in big numbers, condemning the Russian military attacks in Ukraine and calling on governments to do more to punish Russia.

Just yesterday, several hundred people marched through heavy rain in Sydney chanting "Ukraine will prevail" while protesters in Tokyo called for Russia to be expelled from the United Nations Security Council.

Thousands of people also took to the streets in Europe, with protests in London, Nicosia, Berlin, Athens, Helsinki, Madrid, Switzerland and Milan draping themselves in flags and holding "stop the war" placards.

"My family is in Kyiv region and they are attacking Kyiv today. I don't know what to do, what to think. I am calling them every 10 to 15 minutes," one protester said. "I hope the whole world will... just stand up and do something to protect our families."

Photos from protests against the Russian invasion, which are taking place around the globe. On these photos: Sydney, Australia; Tokyo, Japan; New York; the US; Istanbul, Turkey. pic.twitter.com/NoPJgmbCKU

Gratitude and thanks for @nswpolice for enabling us to protest peacefully today in Sydney #StandWithUkriane pic.twitter.com/kBYrgpNv97

Even in Russia, protests are taking place.

A Communist party MP called for an end to Russia's attack in Ukraine, and dozens of Russian humanitarian organisations published an open letter to Putin, asking him to stop the war. On social media, many Russians have also voiced their dismay at the war in Ukraine.

More than 2000 people have been arrested since Thursday at demonstrations across Russia, especially in Saint Petersburg.

Their bravery is humbling. pic.twitter.com/m9WN3oCDBd

Russia will have a hard time accessing international money to fund its war, after Western allies blocked its banks access to international payment system SWIFT.

The US, Britain, Europe and Canada have moved to block certain Russian banks' access to the SWIFT, effectively freezing its overseas transactions, imports and exports.

The measures, which will also include restrictions on the Russian central bank's international reserves, will be implemented in the coming days, the nations said in a joint statement that also vowed further action to come.

"We will hold Russia to account and collectively ensure that this war is a strategic failure for Putin," the leaders of the European Commission, France, Germany, Italy, Great Britain, Canada and the US wrote in the statement on Saturday.

Second, we will paralyse the assets of Russia’s central bank.

This will freeze its transactions.

And it will make it impossible for the Central Bank to liquidate its assets. pic.twitter.com/8H9eWkNCW9

Cutting Russian banks out of the SWIFT system will stop them from conducting most of their financial transactions worldwide and effectively block Russian exports and imports, EU Commission President Ursula von der Leyen said.

The sanctions will also stop Russia from "using its war chest", paralysing the assets of its central bank, freezing its transactions and making it impossible for the central bank to liquidate its assets, she explained.

In Britain, Prime Minister Boris Johnson said the allies' "decisive action" would shut Russia out of the global financial system.

"We will keep working together to ensure Putin pays the price for his aggression," he wrote on Twitter.

In Australia, today’s news is primarily focused on the floods affecting Queensland and NSW. There are severe weather warnings across the country.

The death toll from flooding has risen to seven. In Queensland specifically, a "completely unpredictable" extreme rain event has killed six people, with hundreds evacuated.

Early on Sunday, a man died in the Brisbane suburb of Indooroopilly when his car became submerged in floodwaters about 2.30am.

"I don’t want to see any more deaths. So please, please if you do not have to be out today, just stay at home, because this water is unrelenting at the moment."

She asked residents to conserve their water usage, as a water treatment system has gone offline.

In Gympie, the Mary River is expected to rise above its highest level in 23 years in the next 24 hours.

Heavy rainfall and potential flash flooding are forecast from Kingaroy through to the NSW border. Intense rainfall is also predicted for an area encompassing Hervey Bay, Yarraman, Toowoomba and Ipswich.

There is major flooding at Tewantin near Noosa, and Picnic Point and Dunethin Rock on the Sunshine Coast. Major flood warnings are in place for multiple waterways in southeast Queensland.

Meanwhile, in Australia...
over 1000mm rain in the past few days and still dumping 😱⛈ #Australia #Queensland #flooding #floods #queenslandfloods pic.twitter.com/5fU5LFheAe

In NSW, there is a risk of "life-threatening flash flooding particularly during this afternoon and evening" across the Northern Rivers and Mid North Coast, in areas including Lismore, Grafton, Coffs Harbour and Dorrigo.

In Queensland, for emergency assistance you can contact SES QLD on 132 500. If your life is at risk, call Triple Zero (000) immediately. Emergency updates can be found at Queensland Fire and Emergency Services.

In NSW, for emergency assistance you can contact SES NSW on 132 500. If your life is at risk, call Triple Zero (000) immediately. Emergency updates can be found at NSW State Emergency Service’s website.

For the latest weather updates, visit the Bureau of Meteorology.

Jumping back on to bring you another update on the unfolding situation in Ukraine.

Multiple news outlets - including The Kyiv Independent who are on the ground - are now reporting that explosions have rocked Ukraine's capital Kyiv. Approximately three million people live in Kyiv.

It comes as the country's deputy interior minister warned of an impending airstrike just hours ago.

Air raid sirens were recently blaring throughout Kyiv, with BBC journalist Paul Adams, who is in Kyiv, writing on Twitter: "This time the warnings were alarmingly specific: incoming missiles expected within minutes. Kyiv is bracing itself as never before. One MP told us that Russia 'will hit us with all they have'."

Kyiv now. Continuous rocket shelling. And three convoys of tanks - almost 500 in total - approaching the city from different directions. It will be hellish tonight. pic.twitter.com/pgkjvSnVT1

⚡️Multiple reports suggest that Russian forces are about to conduct heavy airstrikes and rocket attacks against Kyiv.

Dramatic footage on social media shows an oil depot on fire in Vasylkiv, 40km south of Kyiv after heavy shelling from Russian forces, according to Vasylkiv Mayor Natalia Balasynovych.

Heavy fire after a missile attack on the KLO oil depot in Vasylkiv. #UkraineWar pic.twitter.com/WoC7O8b4II

According to Vasylkiv mayor Natalia Balasynovych, the city and the airfield sustained heavy shelling from ballistic missiles. “The enemy wants to destroy everything around, but he will not succeed. Hold on!”

Hello everyone - it's a busy and overwhelming weekend of news, so we are here to make sense of it all.

Today, we will recap everything you need to know, both internationally and closer to home - so check back throughout the day for the latest.

First, a quick recap on the latest from Ukraine.

Just a few days ago, Russia launched a wide-ranging attack on Ukraine which saw cities and bases hit with airstrikes and shelling. It was also confirmed that Russian forces had captured the Chernobyl nuclear power plant, just 90 kilometres from the Ukrainian capital, Kyiv.

Since the takeover, radiation levels have been rising in the area of the Chernobyl exclusion zone in Ukraine. Reports suggest the spike in radiation levels might be due to Russian tanks kicking up radioactive dust around the plant.

The Chernobyl site has been defunct since the 1986 nuclear disaster, when a reactor accidentally exploded and released a large amount of radiation into the air and soil. The Chernobyl Union of Ukraine estimates that the present Chernobyl death toll sits at approximately 734,000, with most because of related cancers.

Now with activity occurring in the exclusion zone, there are serious concerns that radioactive material will spread because of conflict in the area.

For more background information on Chernobyl, you can read this article: The Chernobyl nuclear disaster was the worst in history. Here are four things you didn't know.

Ukraine says there was a non-critical spike in radiation from the decommissioned Chernobyl nuclear plant after Russia seized it. The UN says there is "no danger."

Experts warn of risk if fighting erupts near Ukraine's 4 active nuclear plants or blocks workers from reaching them. pic.twitter.com/6pxsRdyT2W