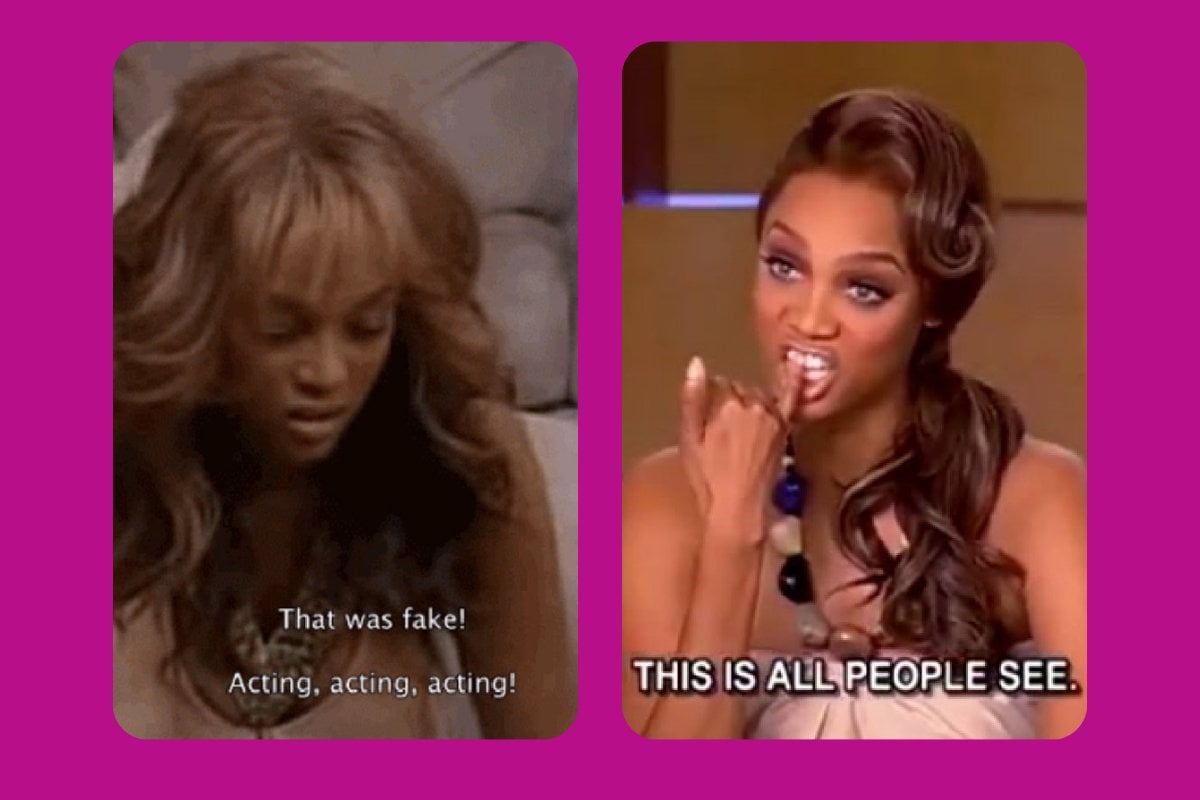 Who let this happen: 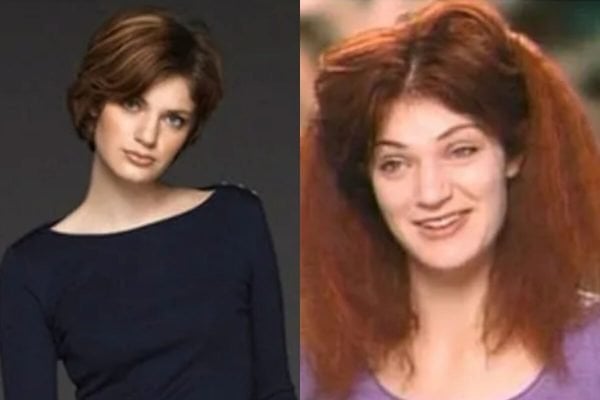 And on a related note, this. 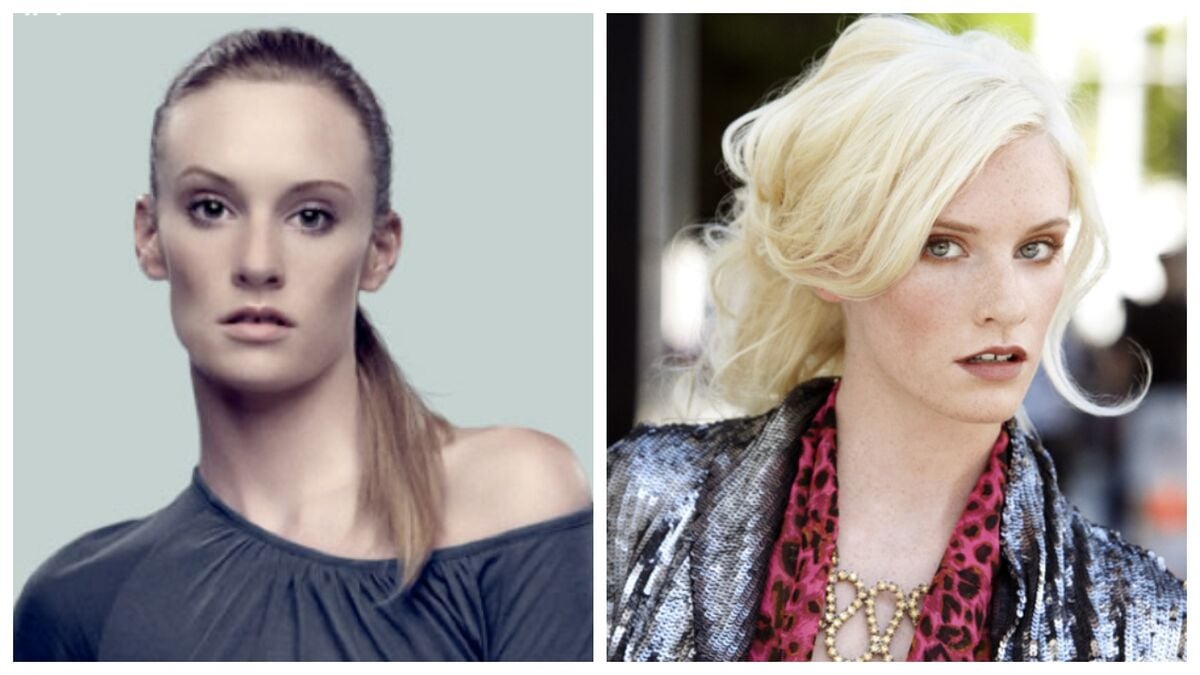 The gap between Chelsey's two front teeth was WIDENED. By a DENTIST. Image: CBS.

Because they need to be stopped. For crimes against hair and teeth (the most heinous crimes of all).

Of course, we all know exactly who was behind these atrocities.

Her name is Tyra Banks, and for a decade in the 2000s, she was the voice in every young woman's head when they found themselves within a 10km radius of a camera.

She was also the person responsible for creating, producing, and hosting what can only be described as too many seasons of America's Next Top Model. So many, in fact, that some moments were bound to age... terribly.

Listen to this week's episode of Cancelled, about America's Next Top Model. Post continues after podcast.

For years, the wisdom of America's Next Top Model - like when Tyra taught us to 'smize' (smile with your eyes), and also how to be a "hoe, but then make it fashion" - lived only in dusty but easily retrievable parts of our brains. And in random clips on YouTube.

But then last year, while we were all at home and worrying about things far more consequential than who got photo of the week, old seasons of the show were added to Amazon Prime and Hulu. Which was lovely.

Until we watched them.

And remembered the photoshoots. And the makeovers. And Tyra's clangers.

The America's Next Top Model photoshoots

In two different seasons, contestants had to pose as dead people after losing people close to them.

In Cycle 4, Kahlen had to pose in a grave shortly after she found out that her friend had died, and in Cycle 8, Jael had to pose as a corpse the week after her friend died of an overdose.

Why were graves and/or corpses a recurring photoshoot theme?

I don't remember the last time I opened a magazine and bought a foundation because it looked lovely on the model, who was posing as a corpse.

I'm also fairly certain it's completely appropriate in any workplace to say: Oh, I've just been through a personal tragedy, so that challenge/task/bizarrely specific photoshoot brief is upsetting. And confronting. Today.

But Tyra wasn't here for people's feelings. If you want to be a top model (look, it was never really clear what a 'top' model actually was) you have to swallow your tears and channel your pain into an AESTHETICALLY PLEASING PHOTO. 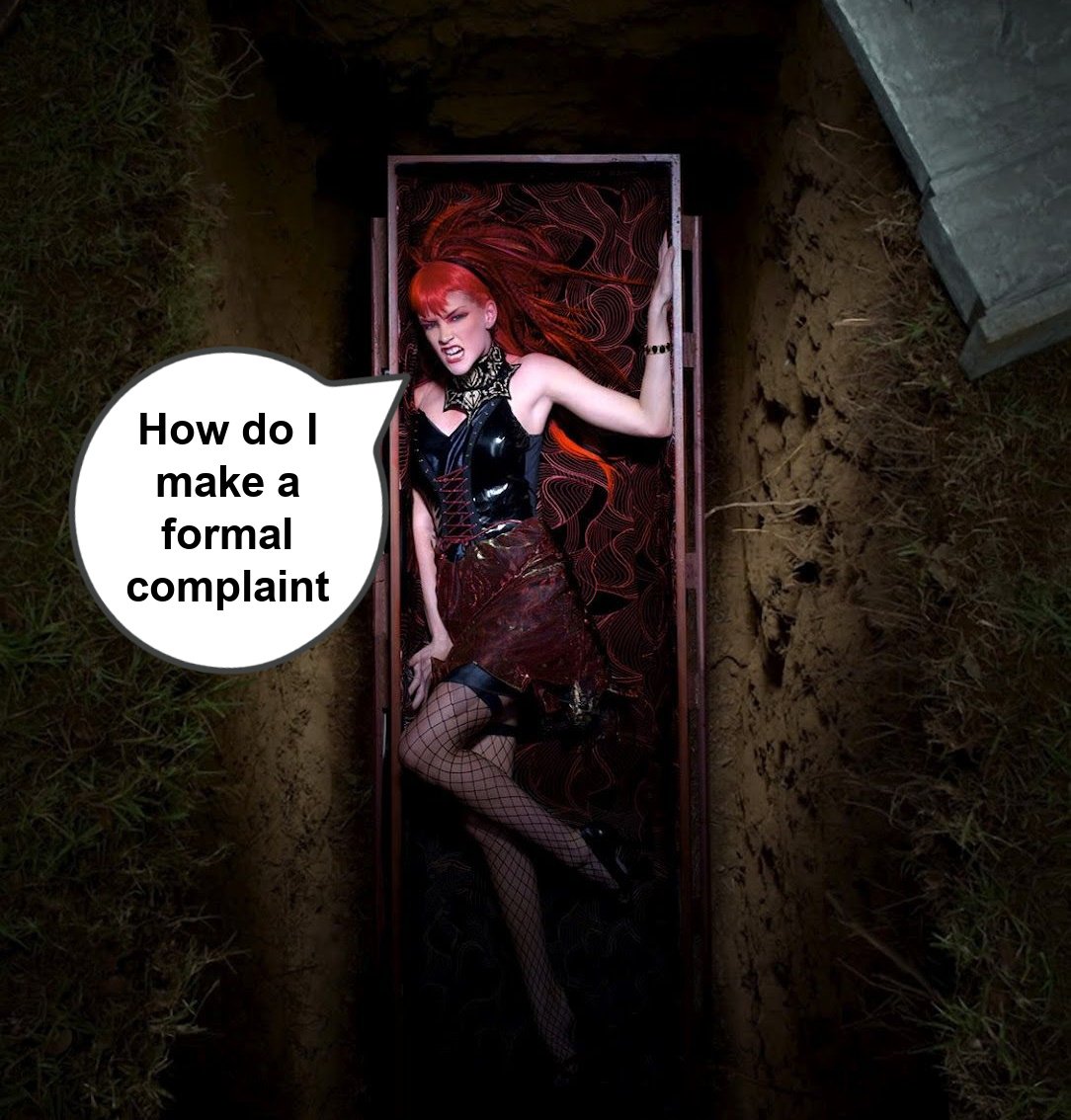 'This feels unnecessary.' Image: CBS. Then, in Cycle 4, there was Keenyah. Over the course of the season, Keenyah's stomach stopped being concave.

It was almost as though she was a healthy woman, with organs. Or - god forbid - a meal in her belly.

Tyra gave Keenyah an impassioned speech about nutrition and modelling, and it was a constant source of 'feedback'. There was frequent footage aired of Keenyah eating, and then, of course, there were the photoshoots.

In case Keenyah didn't notice the discourse around her appetite, in a photoshoot where the contestants were assigned one of the seven deadly sins, she was assigned gluttony.

The 19-year-old was made to lie in a coffin (!!!) full of bacon and doughnuts, covered in grease and sprinkles.

THEN, in a later photoshoot, where the contestants were assigned an animal, Keenyah was tasked with personifying an elephant. 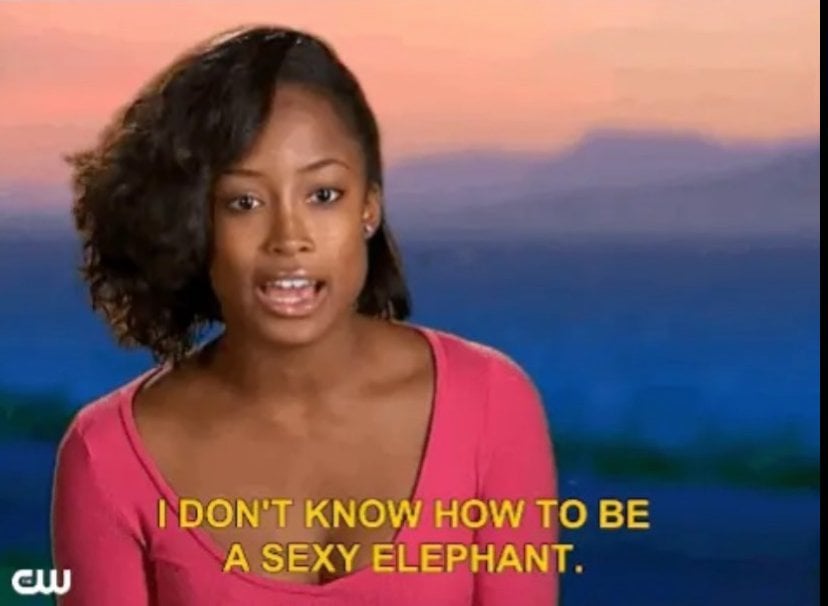 In the final episode of the season, Tyra says of Keenyah:

"Keenyah was confident and hungry for success… Will Keenyah’s appetite for victory convince the judges that she can look the part of a top model?"

Okay. Tyra loved a pun. But let's... not. Shame women. For their literal appetite??

In Cycle 4, the women had to model as "different ethnicities". Again, I've never bought a foundation because the model in the picture looked so good wearing THE WRONG ONE FOR HER FACE.

Some of the white contestants posed as black women. As one of them glanced in the mirror at herself in blackface, she said, "I'm a black woman with a nose job". Another voice replied, "You are. You're a Jackson."

Then, years later in Cycle 13, the contestants were made to appear biracial in a photoshoot, and many wore thick makeup to darken their skin.

The America's Next Top Model makeovers

I've said it once and I'll say it again: Tyra Banks is not a dentist.

And yet, she permanently altered two women's teeth in the name of a TV show.

In Cycle 6, Tyra requested that the gap between Danielle's two front teeth be closed. Danielle, however, quite liked her gap, and didn't want to change it.

"So Danielle, you went to the dentist, but you refused to have your gap closed," Tyra said. "Do you really think you can have a CoverGirl contract with a gap in your mouth?"

"Yes, why not?" Danielle replied.

"This is all people see,” Tyra said while pointing to the middle of her front teeth. "It’s not marketable." 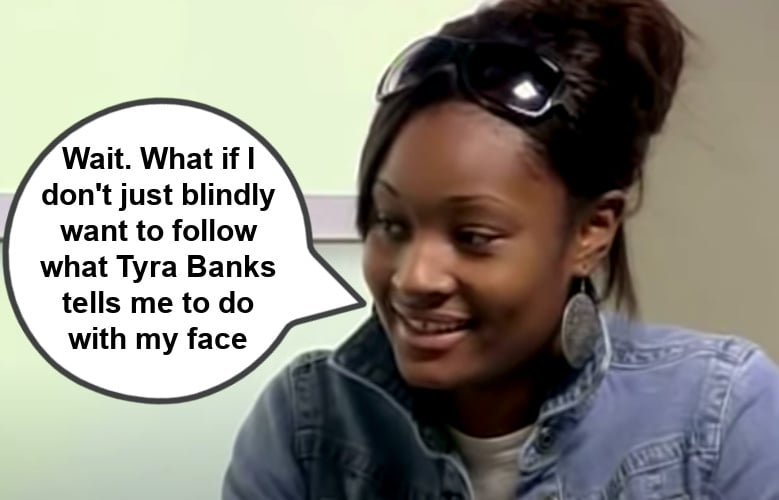 Well then why are you here, Danielle? Image: CBS.

In the end, Danielle had her gap closed, and went on to win that season.

Bizarrely, however, in Cycle 15, the very same Tyra had another contestant, Chelsey, widen the gap between her teeth.

She had a millimetre shaved off each of her front teeth.

It remains, to this day, a decision that wakes me up in the middle of the night with profound anxiety.

Other makeovers, while still radical, were thankfully less permanent.

You see, Tyra loved to cut a woman's hair off for no reason. In Cycle 5, Tyra decided to cut Cassandra’s long brown hair into a blonde pixie cut, like Mia Farrow. Cassandra was devastated, but did the photoshoot with her new haircut. When she came to the judging panel at the end of the week, however, Tyra was unsatisfied. 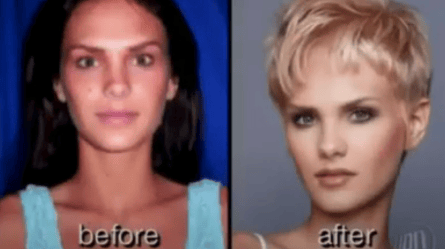 She demanded Cassandra's hair be cut shorter, please. At this point, CASSANDRA DECIDES TO LEAVE. RATHER THAN GET ANOTHER INCH OFF HER ALREADY CROPPED HAIR.

I remember thinking at the time: lady, you already cut it all off. The train has left the station??

But then there was the hair Tyra just... ruined. 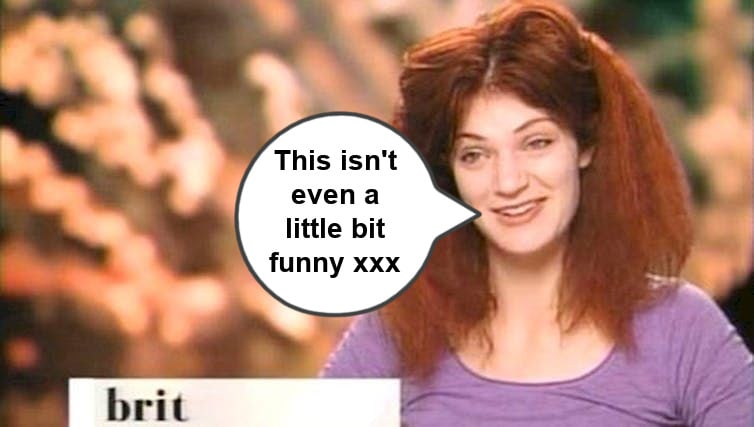 Brittany's new hair pulled on her scalp for several weeks before she finally begged Tyra to remove it, calling her weave "possessed".

Tyra conceded that it looked like a "hamster that had died on [her] head," but dude?? You did this??

Michelle had dark hair that suited her features but Tyra bleached it (obviously). 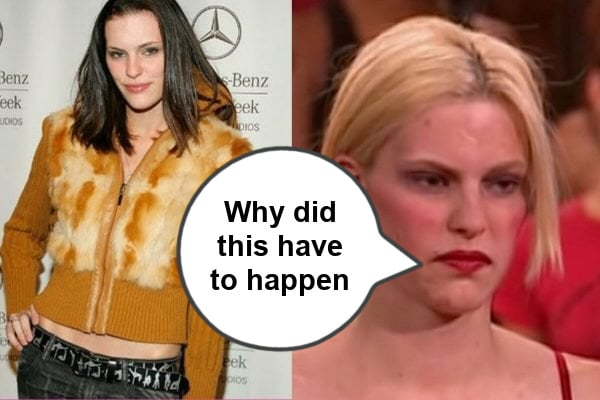 Give me one good reason. Image: CBS.

It quickly went orange (as often happens when you bleach dark hair) and generally looked uncomfortable.

Then, of course, there was the time Tyra gave a contestant a mohawk and a mullet - a hairstyle she said she invented (congrats???) after being inspired by a horse. 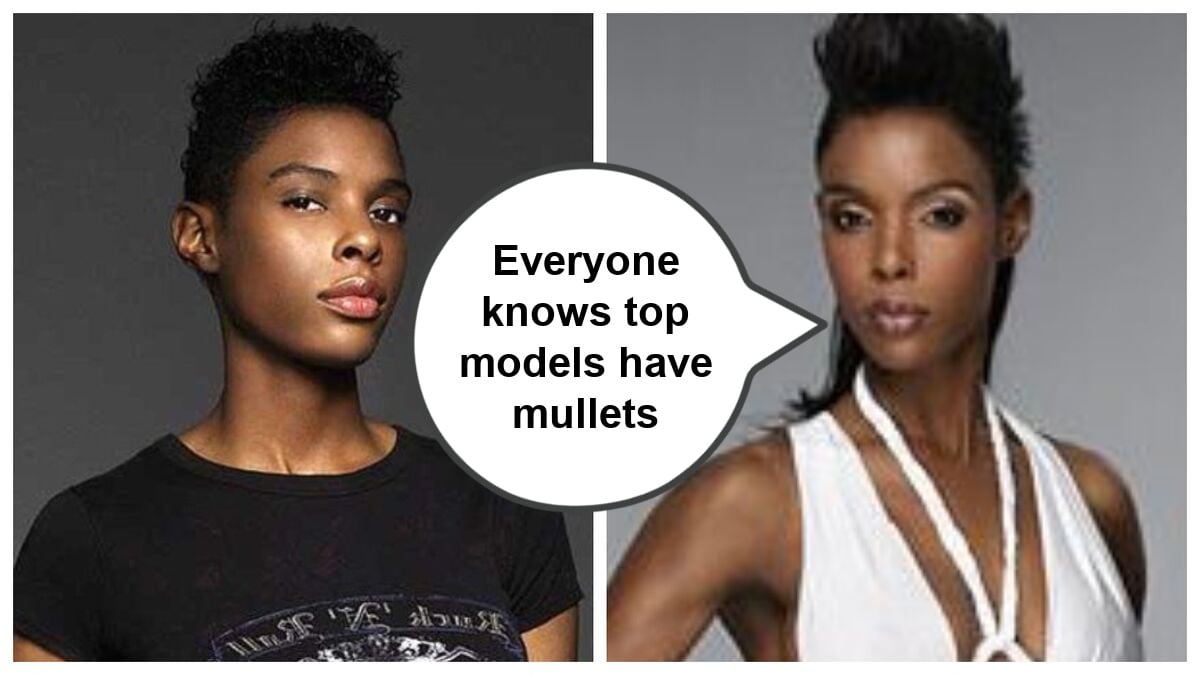 Tyra, you are certainly not a dentist. But you are also not a hairdresser.

America's Next Top Model wasn't really about finding the next juggernaut of the modelling world.

It was about Tyra. In the best way possible.

My favourite thing about Tyra Banks is that she is completely and utterly unpredictable. Often in significant moments, Tyra's face would initially be indecipherable.

Was she going to launch into a lecture?

WHAT U THINKING. Image: CBS.

One of the most iconic moments in the series was when Tyra confronted contestant Tiffany in Cycle 4, just after she was eliminated.

As Tiffany (and the other eliminated contestant of that episode, Rebecca) said their goodbyes, Tyra noticed Tiffany didn't seem... sad enough.

About having to go home.

Tyra asked Tiffany to stand in front of her again, and told her, "I'm extremely disappointed in you".

Tiffany started to explain that she was hurt, but she couldn't change the decision (true). As she was defending herself, however, Tyra decided she'd had enough.

"Be quiet, Tiffany. Be quiet! What is wrong with you? STOP IT," she yelled. "I have never in my life yelled at a girl like this. When my mother yells like this it's because she loves me. I was rooting for you, we were all rooting for you! How dare you!"

Watch: When Tyra did a yell. Post continues after video.

"You don't know where the hell I come from. You have no idea what I've been through, but I'm not a victim. I grow from it and I learn. Take responsibility for yourself!"

Tyra really wanted the contestants to take the show seriously. But there were rules. And they were often invisible.

For Kim in Cycle 5, the unspoken rule was that you weren't meant to be so 'loud' about your sexuality.

Standing in front of the judging panel, Kim said: "I'm gay, and I'm really proud of it."

"I think there's a certain thing of being proud," Tyra began, "like I'm black and proud, you know what I mean? But I'm not like walking down the red carpet like 'I'm black, I'm black'." 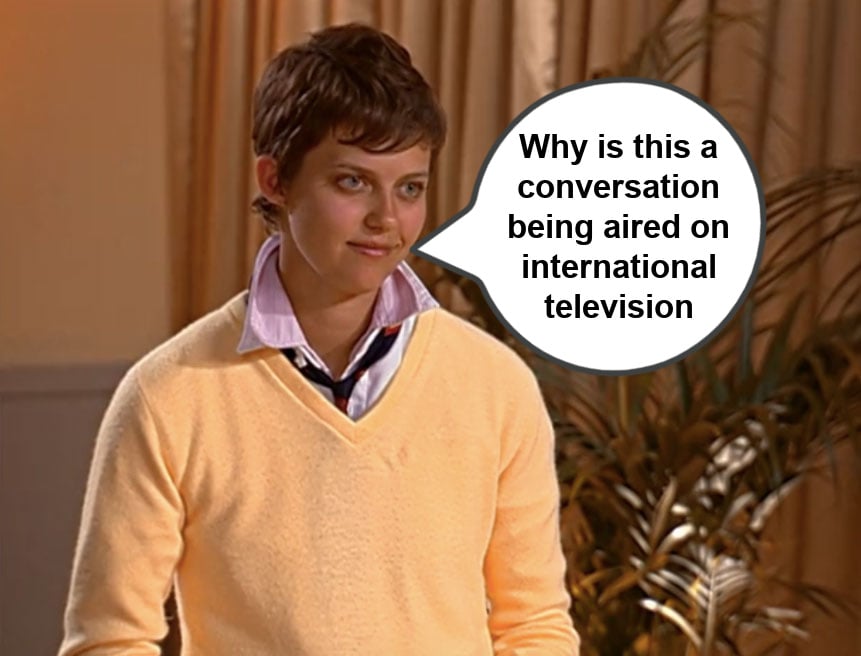 Tyra. Stop, pls. Image: CBS. Then, of course, there was dramatic Tyra. Who would do something so ridiculous no one knew what to... say.

In Cycle 6, Tyra sat with the contestants and said she wasn't feeling well. "I'm so sorry you guys, I don't mean to be all weak in front of you..." she said before adding, "I'm so lightheaded".

Then she tried to stand up. And collapsed.

PEOPLE START SCREAMING. One woman yelled, "OH NO TYRA PLEASE." Another suggested they check her pulse.

Tyra then sat up and softly said, "I'm alright..."

"TODAY YOU'RE GOING TO LEARN ALL ABOUT ACTING." 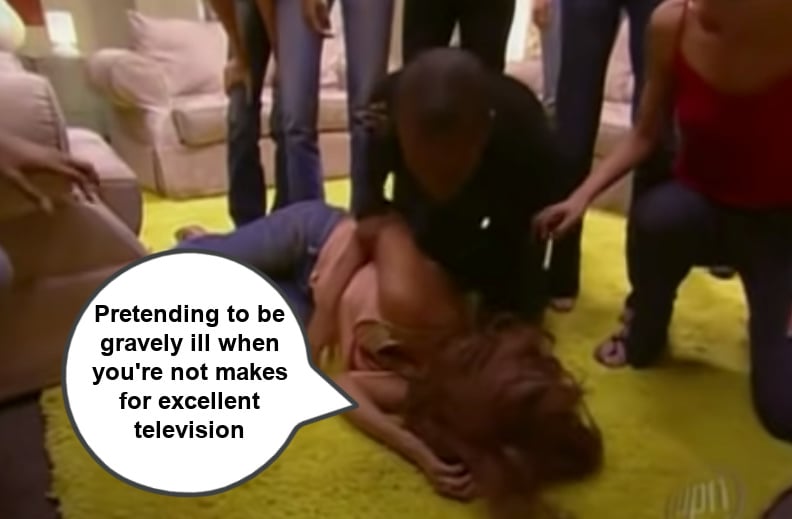 Perhaps one of America's Next Top Model's biggest crimes, however, was the way it made us all think we, too, could be models someday. I genuinely thought that with a Tyra-esque makeover (not one of the... joke ones) and some coaching from Jay Manuel, my weird face might low-key be kinda... modelly.

The result was a never-ending camera roll of cringeworthy photos.

There was smizing. There were backdrops that were actually Kmart towels. There were cats used as props.

There was this travesty.

Why did I think that I - at approximately five foot nothing - could be plucked out of obscurity and made into a model (admittedly one of the odd-looking ones)??

A decade and a half later, my dreams didn't come true.

But a number of women are walking around America with irreparable changes to their hair and teeth, thanks to a show that didn't quite launch their careers like it promised to.

And that's all that matters.

For more from Clare Stephens, you can follow her on Instagram. You can listen to Cancelled on Apple podcasts and Spotify.

Reply
Upvote
1 upvotes
As someone who never watched the show ..  sure it hasn't aged well, but surely it was never considered quality viewing?
C
cat 7 months ago