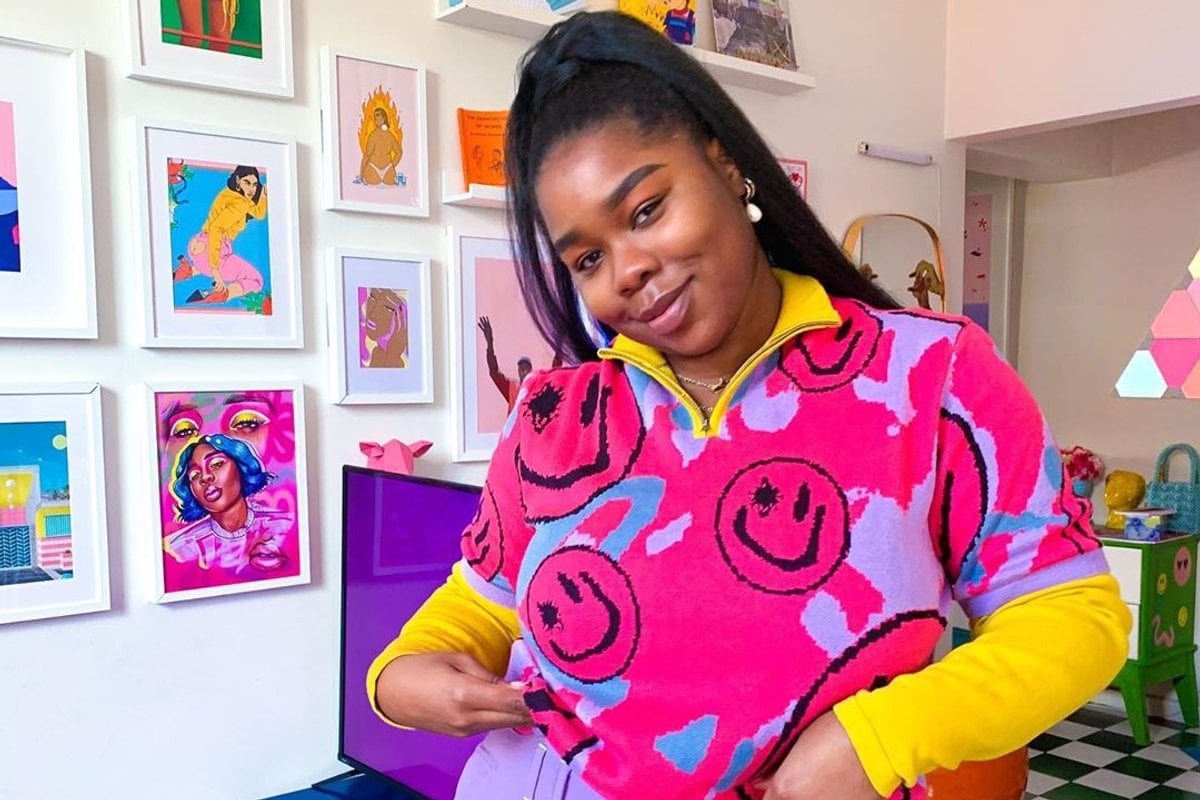 Lillian Ahenkan, more commonly known by her moniker Flex Mami, is a woman of many talents.

The 26-year-old, who has been described as the "ultimate slashie", is an international DJ, television presenter, entrepreneur, author, influencer, and podcast host.

Now, following the success of her podcasts Bobo and Flex and Whatever I Want, as well as Overshare with Mamamia, the media personality has launched a new podcast – Flex's Semi-Factual History Lessons.

As the name suggests, Flex's new podcast delves deep into the historical archives. But despite what you may expect, Flex's Semi-Factual History Lessons is far from what may have you learnt in your high school history lessons.

Instead, the podcast delves into topics ranging from female incarceration and witchcraft to cancel culture and blackface.

The idea for Flex's Semi-Factual History Lessons first came about when Flex was on a Contiki trip in mid-2019.

MY BRAND NEW @SPOTIFYAUNZ ORIGINAL PODCAST IS LIVE!!!! 😱Inspired (strangely enough) by a Contiki trip I went on, I started recounting bizarre, unbelievable or rarely told stories from the past on my IG story 🖼 ONE YEAR LATER and it's been turned into a podcast, where my guests and I use these stories as a jumping-off point to have critical discussions about all the ways history stays repeating itself!! Listen now, only on Spotify!

While on the trip, Flex started sharing little known stories from the past on her Instagram Stories.

"I was surprised at how nuanced these stories were. They were from hundreds of years ago but I could still see the similarities between what we are experiencing now," Flex told Mamamia.

"I was definitely the kind of person who thought history was not interesting. But what I found exciting to me personally [in the podcast] was the creative discussions that you can have afterwards," she explained.

"It's a jumping-off point to talk about all the things that you can't really integrate into day-to-day discussions. In what environment can you talk about the origins of stand-up comedy or blackface? It doesn't come up. I wanted to talk about these topics in a public forum."

While researching for the podcast, it was important to Flex that each 40-minute episode was unique.

"It was difficult to find stories that hadn't been told a thousand times over. That's what I really wanted to avoid," the 26-year-old told Mamamia.

"I wasn't going to invest all this time and energy into creating a platform that mimics every other history podcast. It needed to be different, and it needed to be something that I would actually listen to. I don't want to hear about Ted Bundy for the fourth time."

In the podcast's first history lesson, Flex shares a story on how the first stand-up comedian was a mixed race man – in blackface – who performed in New York vaudeville burlesque shows. The episode then delves into the origins of comedy, and whether comedy can exist in the age of cancel culture.

While preparing for each episode of the podcast, it was important to Flex that the conversation didn't fall into any platitudes.

"My intention was not to fall into platitudes and use the same angle for every conversation," she explained.

"In the instance of the blackface conversation [on the podcast], we didn't want to limit it to: 'Blackface is bad, let's not talk about it.' I wanted to understand if there was any context in which it had been seen as good or worthy. In the context of back in the day, that was a loophole for people of colour to enter the entertainment industry. And suddenly, it's a tool for survival and not one that's wrapped up in, you know, negativity and racism. Not to say that that's good, of course."

In recent years, Flex has built a platform that has enabled a lot of taboo conversations to be discussed publicly.

"All of my platforms, everything I do, has an air of openness. I'm less concerned with being genuine and authentic and more concerned with just making sure that the stories that I'm telling are close to what I would talk about in real life," she explained.

"[While preparing for the podcast], I thought to myself, what's going to be more valuable – having a really ostracising conversation about racism or inviting people into a theoretical discussion about a factual event that occurred. I chose the latter.

"[The podcast] is a place where I can share my thoughts about things. I don't feel like a lot of people, especially public figures, want to share that side of themselves. And by that side, I mean the thoughts they may have that might not mirror the norm, or the thoughts they have that may ostracise a particular audience member."

Listen to the first episode of Flex's Semi-Factual History Lessons below. Post continues after podcast.

Throughout the podcast's 15-week season, each episode will feature a guest.

But instead of inviting experts on each topic, Flex was quite liberal with choosing guests.

In the first episode, for instance, Flex chats to radio presenter and content creator Linda Marigliano about the origins of comedy.

"I just hate the fact that, you know, I myself, I've become someone who people want to lean on to talk about race, identity, womanhood, and everything plus size. These conversations are great but it can become quite limiting. And it almost feels as though you become a caricature in what you have to express," she explained.

"We've already seen representatives from certain groups speak quite loudly about what they know. But I love critical thinking on topics we don't know very well. Like talking to a musician and an entertainer about crime."

As for what she wants listeners to take away from Flex's Semi-Factual History Lessons, the media personality hopes that the podcast provides the tools for all of us to get "an intellectual glow up".

"I really want people to learn and apply themselves," the 26-year-old told Mamamia. 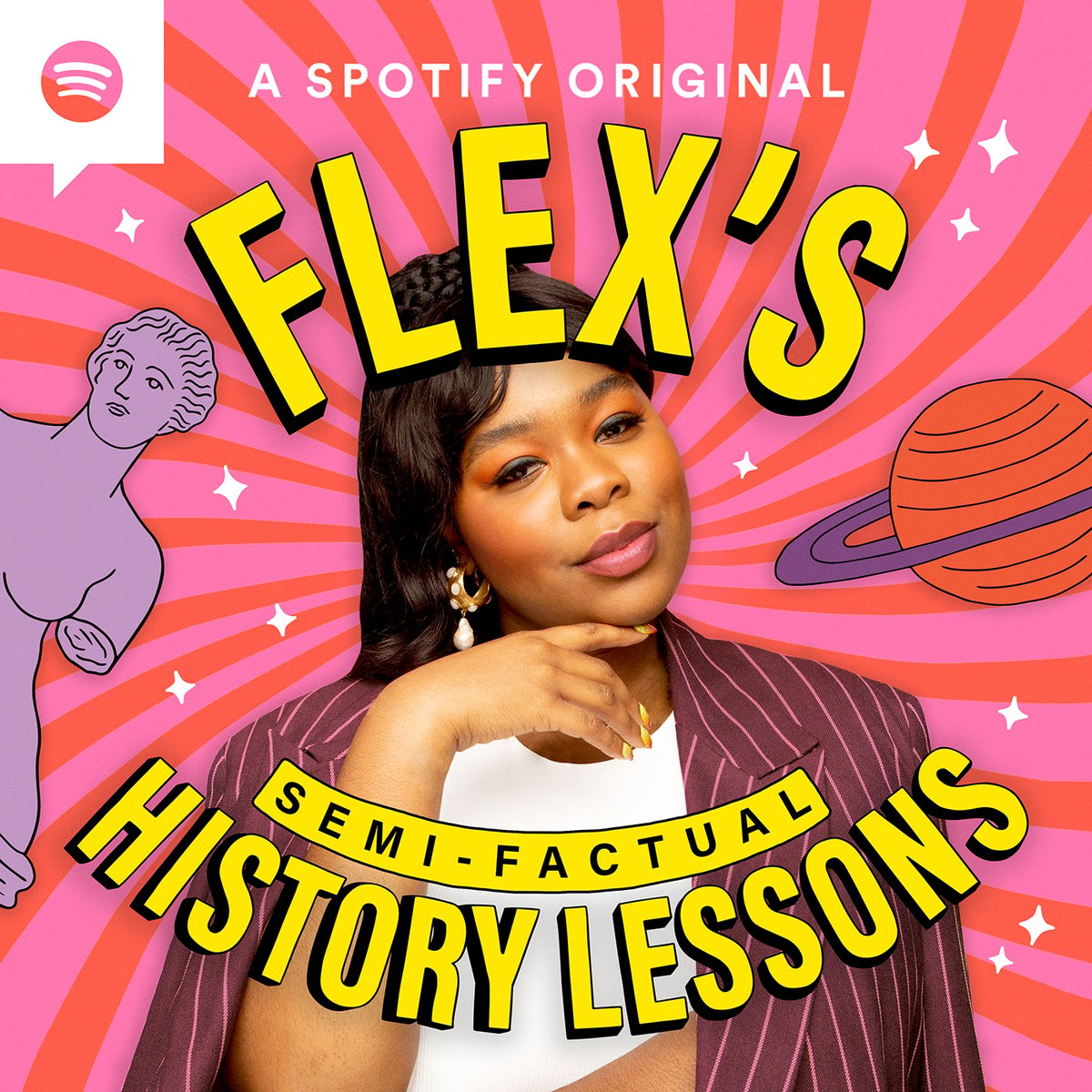 "There's a certain level of responsibility to understand why we are, where we are, how we got here, why it matters."

She continued: "People also don't want to engage in critical discussion if they're not experts on the topic. I'm not an expert on anything. I just have opinions. And I want people to understand that you have agency to speak about things you aren't an expert in because that outward externalising of thoughts and ideas is so vital to us connecting.

"We can't be using a lack of understanding or lack of lived experiences to make ourselves void of having an opinion. If you don't have one, it's a good time to grow one."