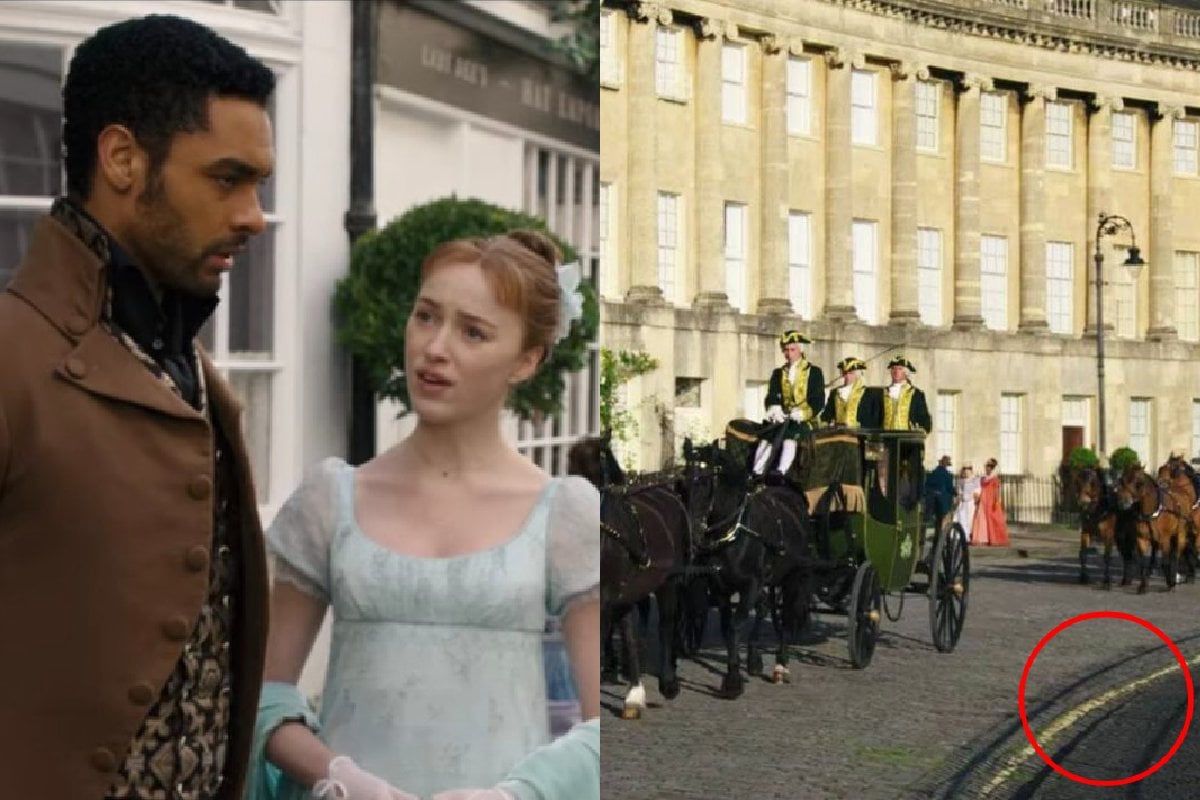 Even the biggest TV shows and movies in Hollywood aren’t immune to editing fails.

From glaring continuity errors and wardrobe fails to rogue coffee cups, little details can often go unnoticed in the filming and editing process.

But thanks to some keen-eyed viewers, we’ve been able to spot these not-so-subtle mistakes. And once you’ve noticed them, you can never unsee them. So we hereby apologise for potentially ruining the following TV shows and movies below (you can never watch them the same way again).

From Bridgerton to Game of Thrones, here are 10 of the biggest editing blunders.

Bridgerton and the many anachronisms.

While most of us were focused on the love story unfolding between Daphne and oh-so-beautiful Simon, some viewers spotted some accidental modern details in Bridgerton.

Sharing their findings to Twitter, various users spotted yellow parking lines, fruit and posters that would not have been around in 1813 London.

"Anyone else watching #Bridgerton and thinking... 'Those are seedless grapes in that fruit bowl... They wouldn’t have been around in the 1800s... They should’ve used a seeded variety for historical accuracy," one user wrote. "Nope??? Anyone??? Only me???"

While another pointed out more accidental details.

"That’s nothing. You will also spot a Primark poster, a single yellow line parking restriction and a parking sign on a lamppost. Downpipes on the front of buildings which would not have been there and a modern day doorbell," they wrote back.

Oh dear, modern yellow no parking lines on the street in the tv drama 'Bridgerton'.
I've worked on a few films/tv shows as historical consultant and art department, I remember our lot painting over modern white lines on a street or covering the whole street with earth ;) pic.twitter.com/AN4v6kqhCB

The opening scene of the show captures a horse-drawn carriage driving along the road. If you look carefully, you'll spot the yellow parking lines that wouldn't have been introduced in England for another century. 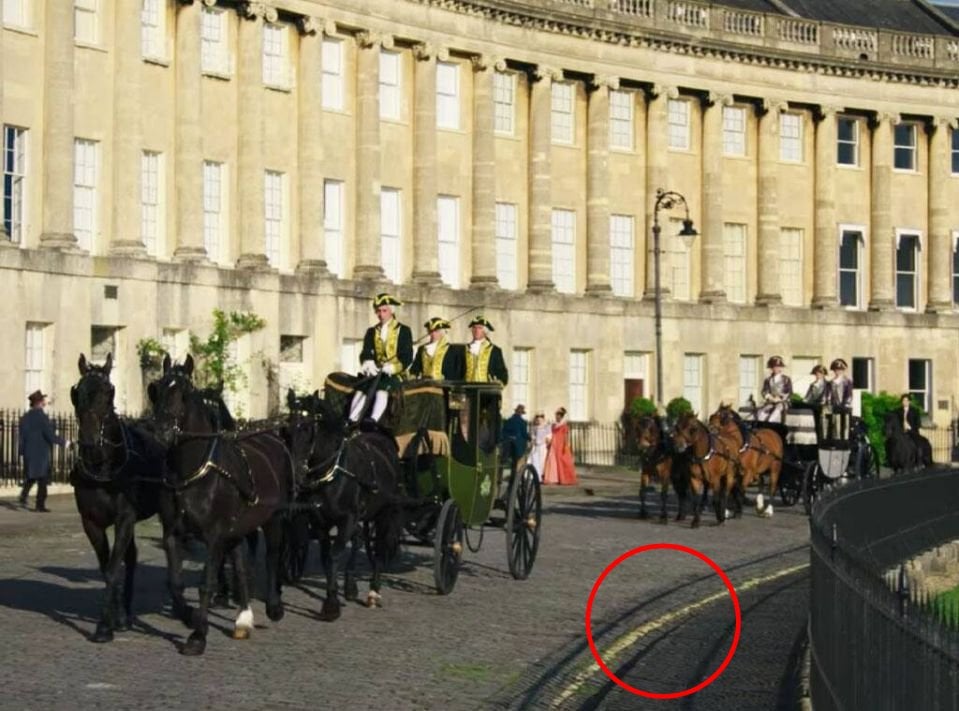 Gossip Girl and the secret trackpants.

For those who haven’t seen the series, the outfits worn by Serena Van Der Woodsen (Blake Lively) and Blair Waldorf (Leighton Meester) were a pretty big part of the show.

But now, a photo has emerged of Serena secretly wearing grey trackpants underneath her coral dress in one of the scenes. And someone clearly forgot to edit it out.

The wardrobe malfunction was first spotted by TikTok user @skyehanamaikai in the ‘Portrait of a Lady Alexander’ episode, where Serena was seen having lunch with Dan Humphrey (Penn Badgley).

Pretty Woman and the shape-shifting croissant.

Pretty Woman will always be one of those classic rom-coms we rewatch when we want a good laugh and cry. But there's one scene in the movie that has a pretty major blunder.

During the morning-after breakfast scene, Vivian is sitting at the table with Edward, discussing what he does for a living. At the beginning of their conversation, Vivian is seen clearly eating a croissant. But in the next shot, the croissant turns into a pancake, before turning back into a croissant near the end of the scene.

And it's quite obvious Vivian didn't just decide to start eating the pancake after the croissant because the pancake already had a bite taken out of it.

We wish we had the magic to change our breakfast food too.

Game of Thrones and the Starbucks coffee cup.

After killing the Night King and the entire army of White Walkers during the Battle of Winterfell in Game of Thrones, all of our favourite heroes gathered in Winterfell’s Great Hall to celebrate their victory and toast the fallen.

But instead of chugging ale out of a Viking horn-like Tormund, Daenerys Targaryen was drinking something very different.

You see, right in front of the Mother of Dragons was a Starbucks coffee cup.

Married At First Sight and the disappearing beard.

During a commitment ceremony in the 2020 season of Married At First Sight, fans noticed that one of the contestant's beard... disappeared.

While speaking to the experts, Steve was seen with stubble. But after his on-screen wife, Mishel shared her decision to stay in the experiment, Steve suddenly appeared clean-shaven, before appearing with stubble again just seconds later.

"When the commitment ceremony is so long, Steve grows a beard while sat on the sofa," meme page MAFS Funny wrote on Instagram.

Did the commitment ceremony really go for that long? Or was the scene just hastily re-shot? WHAT IS GOING ON?

Friends and the one who is definitely not Monica.

In the fifth episode of the eighth season, Phoebe and Monica are hanging out in the coffee house as they usually do. The first shot very clearly shows the pair talking. But in the next shot, Phoebe is very clearly sitting next to... someone else.

Clueless and the reappearing side mirror.

By now we've all watched Clueless more times than we can count. But there's a good chance you probably didn't notice that in one scene the side mirror of Cher's car reappears.

While Cher is attempting to pass her driving license test, she hits the side of her Jeep against a parked vehicle and her passenger-side mirror clearly falls off from the impact. But moments later, the side mirror is back in place as the Jeep comes to a stop around a corner.

Speaking of classic films, Quentin Tarantino's Pulp Fiction also has a glaring error. In one scene, Jules and Vincent are in an apartment and escape being shot by bullets fired at a point-blank range. But if you look closely behind the two men, you'll notice there are bullet holes in the wall before any shots are actually fired.

The editing fail has caused fans of the film to debate if it was a simple mistake or if Tarantino deliberately included it in the edit. Either way, shots are clearly visible before any shooting takes place.

Gladiator and the gas canister

Period films like Gladiator need to be very careful they accurately reflect the historical error. But one scene was very much ahead of its time.

During the Battle of Carthage scene, a chariot hits a wall and flips over, revealing a gas canister hidden underneath. And while the Romans were certainly known for their technological advancements, gas canisters weren't one of them.

Pirates of the Caribbean and... the cowboy.

At the end of the first Pirates of the Caribbean film, Captain Jack Sparrow is reunited with his ship, Black Pearl, and his crew. In the final scene, a panning shot sweeps over Jack Sparrow's shoulder after he says to the crew, "On deck, you scabrous dogs."

But if you look closely, you'll notice a man in a white shirt and a white cowboy hat is standing at the back of the ship looking off into the distance. Not only does he stand out as the only cowboy in a film full of pirates, but his t-shirt and sunglasses are very much out of place in the 18th-century setting.

Have you noticed any editing fails in TV shows and movies? Let us know in the comments below.