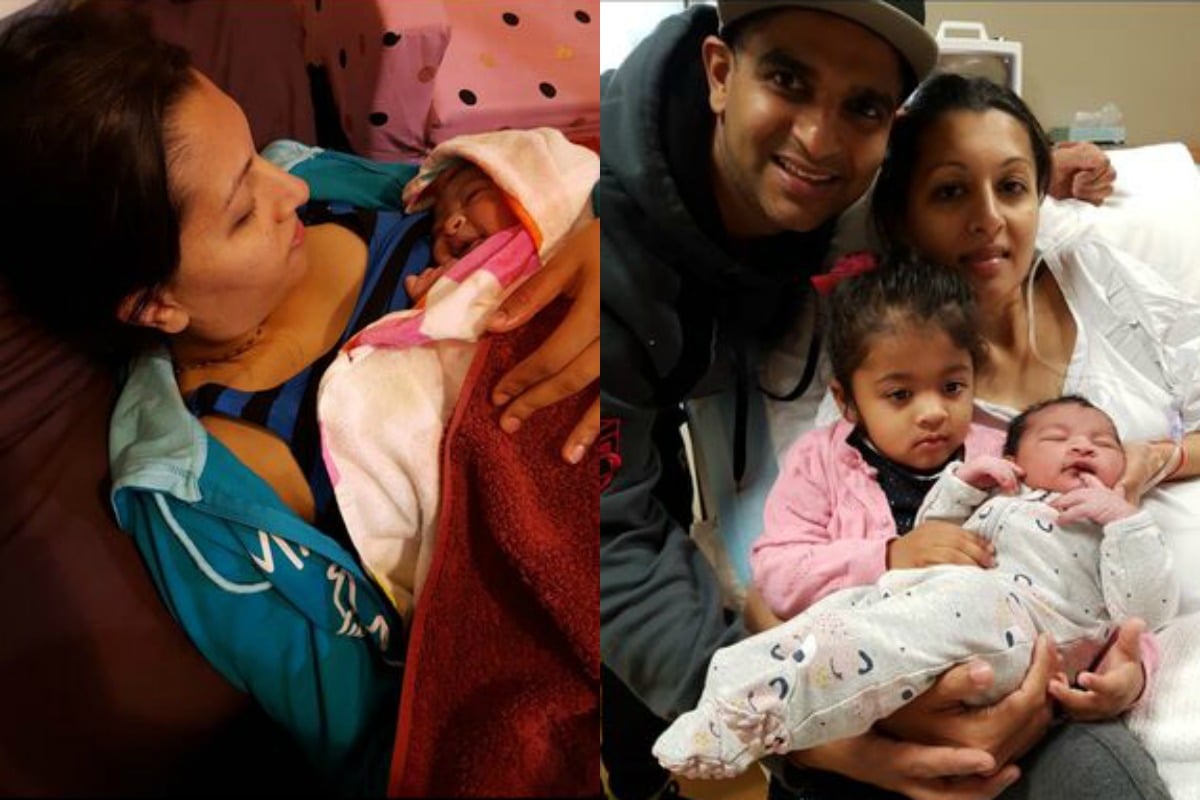 Auckland residents Sandy and Kumar celebrated the arrival of their first daughter Shanelle, after a long and difficult delivery.

“Apart from the normal 12 weeks of morning sickness, my pregnancy was very straightforward,” Sandy said.

“I went into labour on my due date after my waters broke at 11pm. I then spent most of the night pacing around the house in pain.”

Watch: Questions about childbirth answered by mums - and non-mums. Post continues below.

At 8am a midwife came to do an internal examination and by this stage Sandy was still only 3cm dilated, but they were told to make their way to hospital.

“By this time, I hadn’t slept or eaten anything and I was exhausted from the pain. I requested an epidural as soon as I arrived at the hospital which provided some relief. I was monitored closely and given some hormones to help speed up the dilation process, but it was slow going.”

By 9pm, after almost 24 hours in labour, Sandy suddenly got the urge to push.

“Shanelle’s head got stuck so the medical team decided to bring in a suction cup to help get her out. I remember three more big pushes and thankfully, she came out okay. I had some skin-on-skin time with her before being whisked away for four hours of surgery to repair the third degree tear.”

While Sandy’s physical recovery was good, she struggled to breastfeed and felt conflicted by the pressure placed on her.

“I was exhausted, and not being able to breastfeed easily was overwhelming as Shanelle was clearly distressed. Thankfully one of the midwives spotted I had inverted nipples and got me to try a bottle instead. It worked and Shanelle was so much happier. Looking back now I realise how stressful that was so soon after her birth and how I felt like I wasn’t a ‘proper mum’.”

Eight months later the couple moved across the ditch to Melbourne for Kumar’s work as an architect.

Host Laura Byrne walks you through the big post-motherhood moments with stories of wisdom, humour, breakdown, ambition, love, hope and rebirth from a truly diverse range of parents on Mamamia's Me After You Podcast. Post continues below.

In 2017 Sandy was pregnant again and feeling much more comfortable as her due date drew closer.

“I thought I knew what to expect this time around and I had all the baby girl stuff ready to go. It was a completely different pregnancy though, and I experienced false labour pains (Braxton Hicks) from the second trimester which I had not had before.

“Looking back, it hinted at the very different delivery!”

Due to her third degree tear with Shanelle, Sandy was booked in for a c-section but as the date loomed, she cancelled it.

“I wasn’t ready for baby to come just yet and so I decided to let fate take over. On November 4, I woke up just after midnight with severe cramps.

“I woke up Kumar and asked for some Panadol. When he came back up to give me the tablets, I wasn’t aware but I was biting his fingers because of the pain! We both realised what was happening, and he called my mum to come and pick up Shanelle.”

As the pain became more intense, Sandy moved into the bathroom so as not to wake toddler Shanelle who was asleep in their bed.

“10 minutes after waking up, I felt like I needed to poo and that I must have an upset stomach due to anxiety. I sat on the toilet and pushed to relieve the pressure while Kumar decided he'd better call the midwife!”

While Kumar was on the phone, Sandy’s mum Mohini arrived.

“I had no privacy as we all crammed into the bathroom deciding what to do next. I suddenly felt this immense stinging pain and as I looked down I realised baby Shanaya’s head had popped out!

“My mum screamed ‘oh my god!’ and I think the pure shock forced me into action as I told her to go and get some towels and a pillow. Kumar stayed on the phone to our midwife who talked him calmly through what to do next.”

As Sandy lay down on the bathroom floor unable to move another inch, the midwife told Kumar how to get the baby’s shoulders out one at a time. Once baby Shanaya was out, he lay her on Sandy’s chest, waited for the first cry and then called for an ambulance.

“It was all so quick, surreal and completely amazing. Mum took photos and a video and we all checked to see if she was a girl while we waited for the ambulance to arrive. They then helped Kumar cut the cord.” 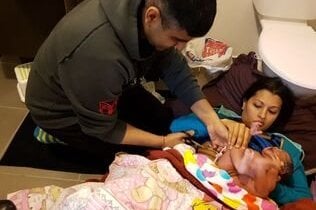 Birthing in the upstairs bathroom of a two-storey home meant that Sandy had no other choice than to walk down the stairs to get to a wheelchair.

“I think the adrenalin just kicked in. I rode in the ambulance with Shanaya and Kumar followed. On arrival I was checked over and the midwives helped to remove the placenta.”

After surgery to fix up the tearing, Sandy was reunited with baby Shanaya and this time she immediately told the midwife she was unable to breastfeed.

“I felt no confusion or guilt as I knew what was best for me and baby. They were fine about it and organised formula for us. Two days later I went home!” 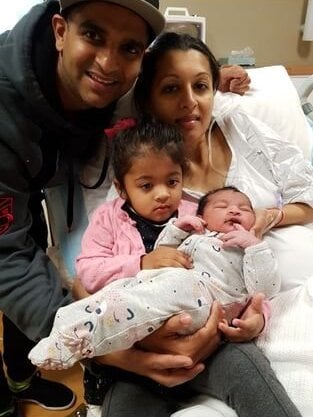 Shanaya’s entrance into the world has even made an impact on her older sister.

“Shanelle loves to tell people that Shanaya was born on the floor in our bathroom. I love that it has already become a memorable family story!”