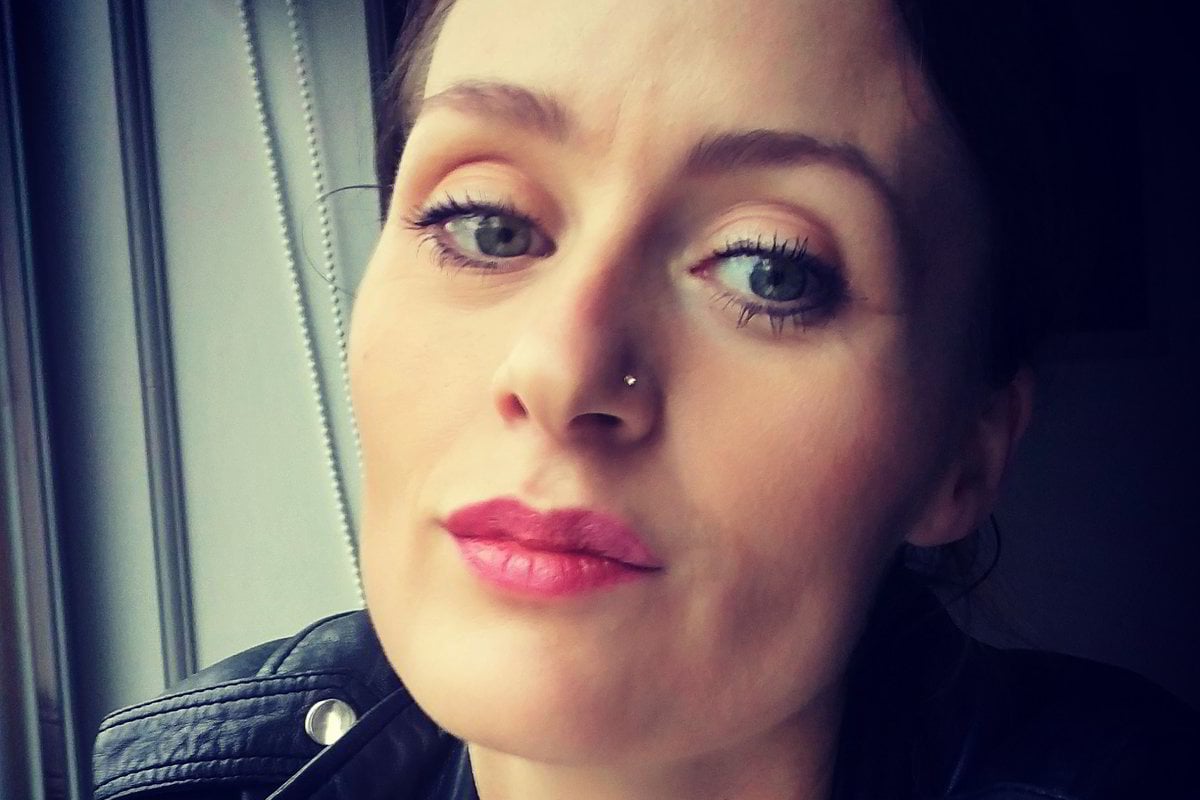 It all started with a drinking game. Truth or dare.

"Truth!" my best friend, Emma, said when it was her turn.

Watch: how to have better sex. Post continues below.

Emma grinned at Dan, her boyfriend of three years, and they both answered at the same time.

Everyone turned to look at me and I felt my face growing hot.

"Yeah, so how about it, Hol?" Dan joked - and the entire room erupted with laughter.

As the night wore on and the drinks continued to flow, I realised I couldn't stop thinking about it.

After the party wound down, it ended up being just the three of us left - and the inevitable happened. We ended up in the bedroom.

Emma kissed me, slowly slipping my dress off my shoulders, cupping my breasts in her hands, while Dan watched. Then it was his turn to kiss me. He put his lips on mine and immediately, I felt a spark.

I'd never even entertained the idea of having sexual chemistry with my best friend's boyfriend. But as his tongue entered my mouth and he pressed his body against mine, it was undeniable.

Shaken, I went back to Emma, suddenly feeling... vulnerable. Dan watched, stroking himself, as I bent my head to lick and suck on her nipples.

Soon all three of us were naked and in the bed. Dan had sex with Emma while I watched. Then he asked her if he could f*** me as well.

She nodded and I gasped as he thrust inside me. I came in minutes, harder than I ever had in my life.

When it was all over, Dan and Emma fell asleep in each other's arms and suddenly, I felt like the spare part that I was. I grabbed a blanket and went to lie on the couch.

At some point during the night, I heard the door creak and Dan appeared, stark naked and hard in the lounge room.

"Where's Emma?" I whispered, feeling my clit throb and my nipples harden.

Without a word, I grabbed his hand and pulled him on top of me. I told myself it was fine. That I'd f***ed him just a few hours earlier with Emma's full permission. But I knew deep down, it was wrong.

It couldn't help myself though. We f***ed hard and frantically, both of us exploding within minutes.

I was still catching my breath when Dan tiptoed back to the bedroom.

There was never any awkwardness between the three of us afterwards. We even had breakfast together the next morning, and the next time we hung out, it was exactly as before.

But every now and then, when we're together, Dan will catch my eye across the room and I'll feel the undeniable spark I felt the first time he kissed me.

I know we're both guilty of crossing the line. But that will remain our little secret.

Feature image: Getty. The photo used is a stock image. The author of this article is known to Mamamia and has chosen to remain anonymous for privacy reasons.

Reply
Upvote
I maintain it's odd and a bit creepy to have clearly older men commenting so regularly on a page aimed at young to middle aged women. Examples as to why displayed right here.
R
random dude 2 years ago

Reply
Upvote
4 upvotes
@laura__palmer Why creepy and odd  though? The page may be aimed at the young to middle aged women demographic as you say, but many topics raised are also of interest to anyone with a pulse.
I've been here for years when the articles are very different now from when I started, but I feel I had some rapport with many commentators and remained mainly for that.
You are the first person to make me feel unwelcome. To be honest, it feels pretty crappy.
C
cat 2 years ago

Reply
Upvote
@random dude because you’ve come into a space designed for women to discuss women  issues, and started making creepy locker-room jokes about pornography. And not so much you, but other men come specifically to derail discussions and press their MRA, conservative agendas.
Yeah sometimes it feels crappy not to be welcome, but adults generally accept that not every space is designed for them.
R
random dude 2 years ago

Reply
Upvote
@cat I thought it was clear I was making an inference about the unnecessarily salacious wording of the article and comparing it to what was previously R Rated risque material back in the day to what is now just standard run of the mill fare and how yet it is still (even today) something that gets the clicks  - some things never change it seems.
Regarding your second point - adults normally are capable of hearing different views.
C
cat 2 years ago

Reply
Upvote
No sweetie, he has that little "secret" you share with him, with a lot of other people, you and he are cheating on her, but he has other girls and they have fun cheating on you. Fun times. Those guys are manipulators and they use all women. The dumb ones are the ones who fall for their crap or believe anything they say or do.
News
General
Opinion
True Crime
Politics
Sport
Explainer
Entertainment
Celebrity
Reality TV
Movies
TV
Books
Rogue
Royal
Lifestyle
Beauty
Fashion
Weddings
Home
Wellness
Health
Fitness
Travel
Food
Family
Before The Bump
Pregnancy
Baby
Kids
Teens
School
Parent Opinion
Work & Money
Money
Finance
Career
Lady Startup
Relationships
Sex
Dating
Separation
Friendship
Family
Real Life
Couples