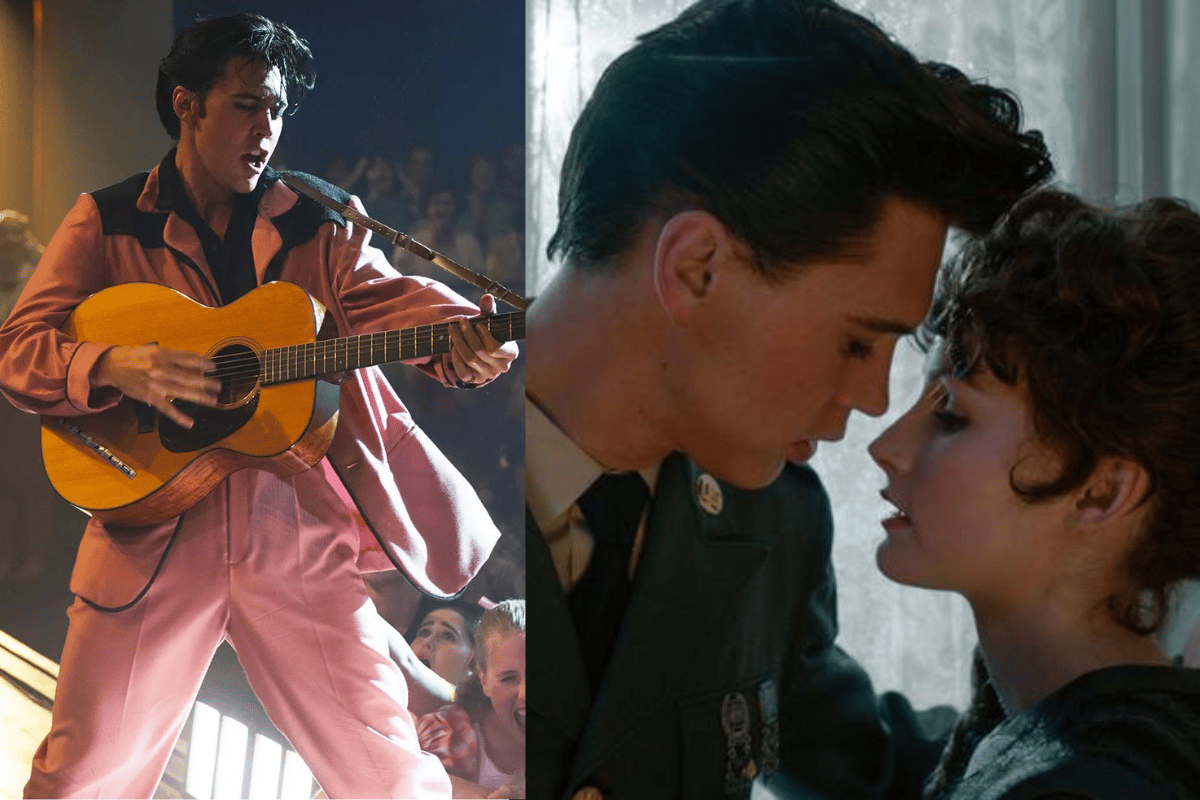 The Elvis biopic continues to be a raging success at the cinema, and there are plenty of reasons why. The film is colourful, creative and tells the story of Elvis Presley and the manipulative influence of his manager Colonel Tom Parker.

There's plenty else that the biopic covers: his love with Priscilla Presley, his rise to fame, his complicated family life and his challenges in the spotlight.

But there are a few key things that Elvis doesn't touch on – in fact, some things were missed out completely.

So without further ado, here are five things it left out.

1. There seemed to be little mention of the fact Priscilla was 14 when she met Elvis, and he was 24...

Elvis and Priscilla first met in Germany. Elvis was there as part of the army, and Priscilla's family had moved several times but were settled in West Germany during her teen years, as her stepfather was an Air Force officer.

Priscilla told PEOPLE in 1985, that when she was introduced to Elvis by another officer, she was shy and 14 years old.

"As Currie led me over to him, Elvis stood up and smiled. 'Well,' he said, 'what have we here?'" she recalled. "'What are you, about a junior or senior in high school?' I blushed and said nothing, not willing to reveal that I was only in the ninth grade. 'Well?' he persisted. 'Ninth.' Elvis looked confused. 'Ninth what?' 'Grade,' I whispered. He started laughing. 'Why, you're just a baby'."

And indeed she pretty much was. The biopic mostly glossed over the age difference between the two, and the fact Priscilla was still a minor when they met.

By 1962, Priscilla was living at Graceland with Elvis and his family, and completing her final semesters of high school in Memphis. 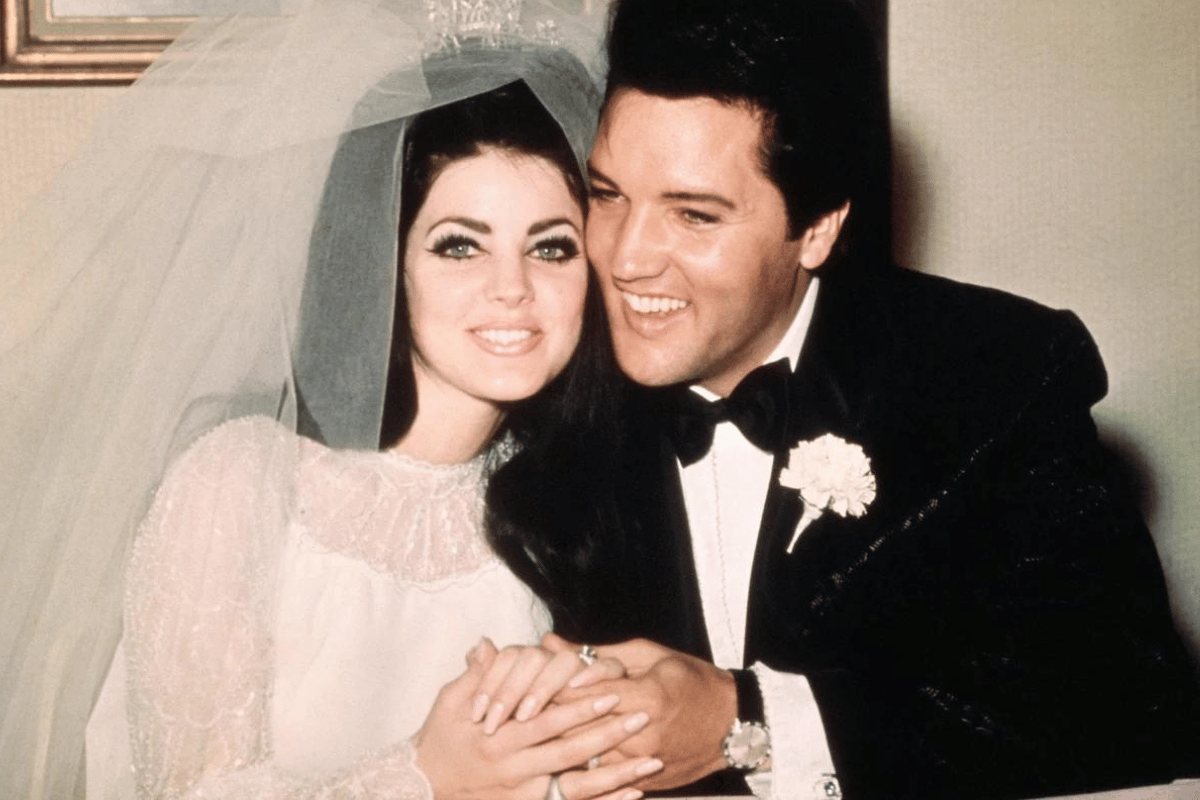 2. There was another important woman in Elvis' life.

If you've seen Elvis, it would make sense for you to assume that Elvis' love life revolved around Priscilla Presley alone. Of course, there were plenty of other women in the picture in a casual sense – the women Elvis would kiss while on stage, while his wife was in the audience. Or the women he cheated on Priscilla with.

But after the couple's split, Elvis went on to form a relationship with beauty pageant winner and model/actor Linda Thompson. They were together for around four and bit years, but their relationship wasn't to be seen in the movie. Thompson has since said she felt "erased" from Elvis' history after seeing the biopic.

She wrote on social media: "I spent four and a half years of my life living with and deeply caring for Elvis on many levels. I shared a hospital room with him every time he was in hospital. I had my own bed next to his during those times. I travelled on every tour with him. I was the only woman to ever do so in this life. I was at every Las Vegas engagement during those years. I literally saved his life on several occasions."

From 1972 to 1976, she lived with the music icon at Graceland before deciding to split with him, desiring a life away from the intense spotlight.

"We stayed in touch and loved each other until the day he died – even though we had broken up and I had moved out of Graceland only eight months before. So any inclusion or exclusion in any movie ever made can never erase the important role I played in his life and he in mine. But every true fan already knows that." 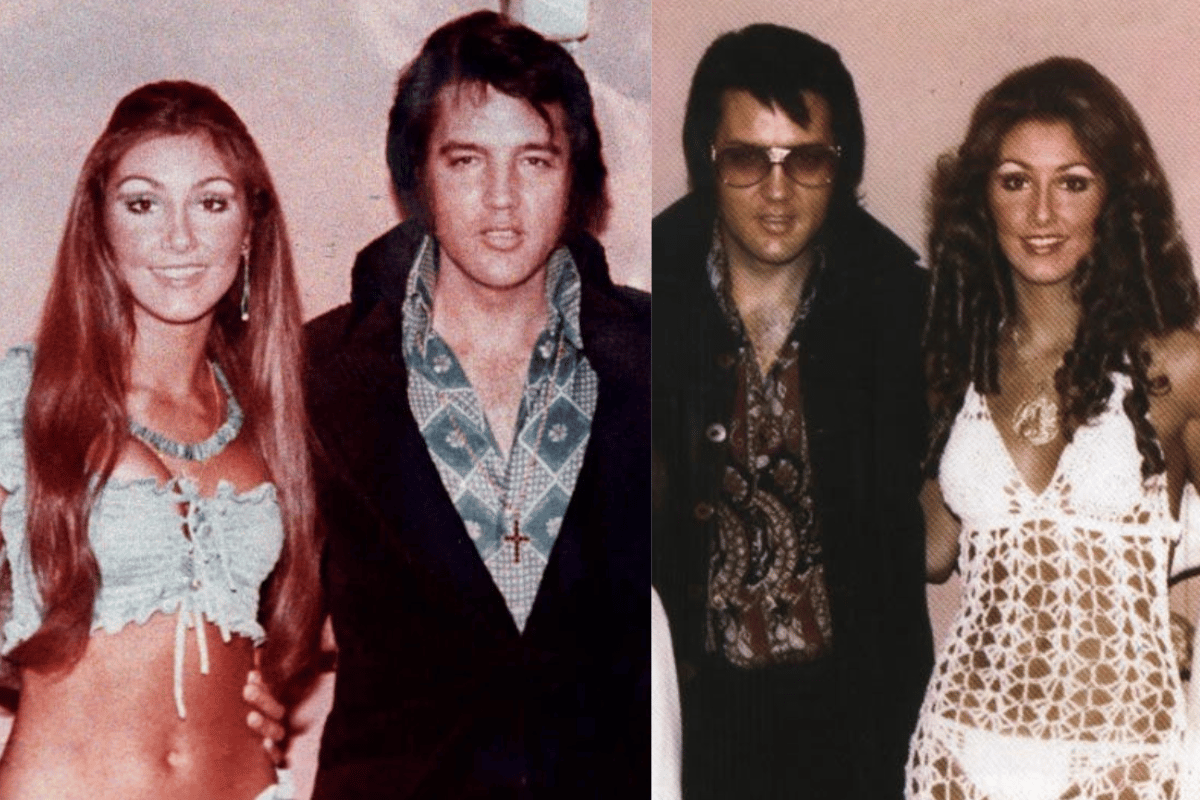 3. There were accusations against Colonel Tom Parker that he killed someone in The Netherlands.

There's no denying that the portrayal of Colonel Tom Parker in Elvis was accurate – a man who was dodgy, manipulative and took advantage of those around him.

But what the movie didn't touch on very much was the back story behind the man himself.

Parker (real name Andreas Cornelis van Kuijk) was born in The Netherlands and at the age of 20 arrived on a freighter in Florida as an illegal immigrant, without a passport. He took the name Tom Parker when he enlisted in the army, and served two years before going AWOL and being charged with desertion. His discharge papers from the hospital labelled him a psychopath.

As to how he was given the title 'Colonel', it was actually from a country singer named Jimmie Davis in exchange for working on the campaign which helped get Davis elected Governor of Louisiana.

In the late 1940s, Parker worked as a music promoter, before signing Elvis Presley in the '50s. But according to Alanna Nash's biography of Parker, he was perhaps running away from something in The Netherlands.

The movie did explore this fact, particularly when it came to Elvis' desire to tour internationally, and the Colonel's attempts to quash that possibility because of his illegal immigration status. But there was more to the picture.

There was an unsolved murder in Breda in May 1929. Anna van den Enden, a 23-year-old newlywed, had been killed. The premises had then been ransacked, apparently fruitlessly, in a search for money. After that, the killer had scattered a thin layer of pepper around the body before fleeing, apparently in the hope of preventing police dogs from picking up his scent. The murder took place close to Parker's family home, but the investigations fizzed out.

Soon after, Parker left for America. And it wasn't until his later years that the allegation he was connected to the crime re-emerged, thanks to the biography, and the revelation of the psychopath diagnosis. 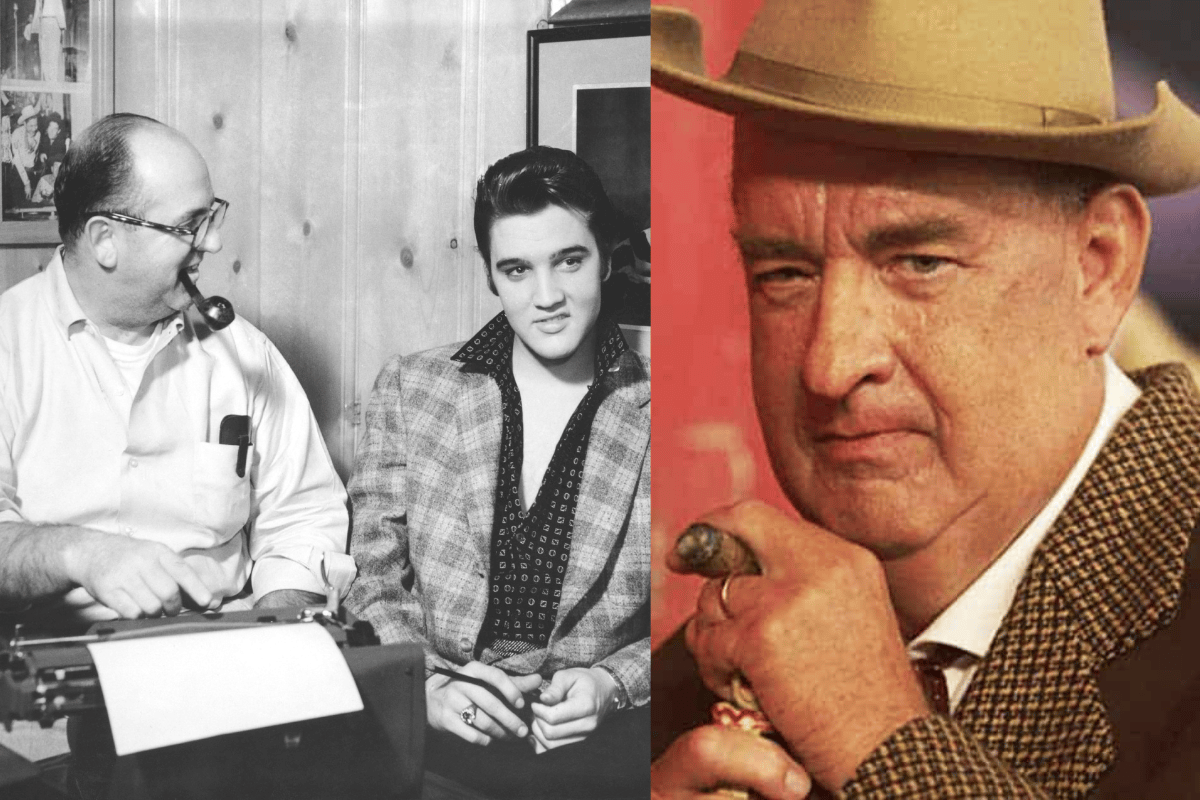 4. Elvis was arrested twice in his life.

In the film, Elvis Presley is carted away in a police car after a performance incites chaos amongst the crowd of 14,000, before being sent to join the army. This scene is as close as the film gets to touching on his run-ins with the law.

His first arrest was in 1955, when he was found to be driving 30 kilometres over the speed limit.

The second time was more serious, when he allegedly started a fistfight with the owner of a gas station. According to Elvis Presley Music, Elvis was being swarmed by fans who were blocking other cars from filling up their tanks. The owner asked Elvis to move repeatedly and said Presley then resorted to violent measures.

5. The film failed to dive into Elvis' health struggles.

When Elvis died at age 42, the world was devastated but arguably not surprised.

Elvis died in his famed Memphis mansion, Graceland, on August 16, 1977. The singer was discovered that afternoon, lying unconscious on the floor of the master bathroom. Presley was rushed by ambulance to Baptist Memorial Hospital and, after several attempts to revive him failed, he was pronounced dead at 3.30pm.

The biopic seems to smooth over the details surrounding Elvis' health in the lead-up to his death. And it's understandable why, considering the focus was on his legacy and the impact of Colonel Tom Parker on his life.

The rumours and theories surrounding his death were, and continue to be, extensive.

At the time of his death, Elvis was struggling with his diet, a prescription pill addiction and heart disease. 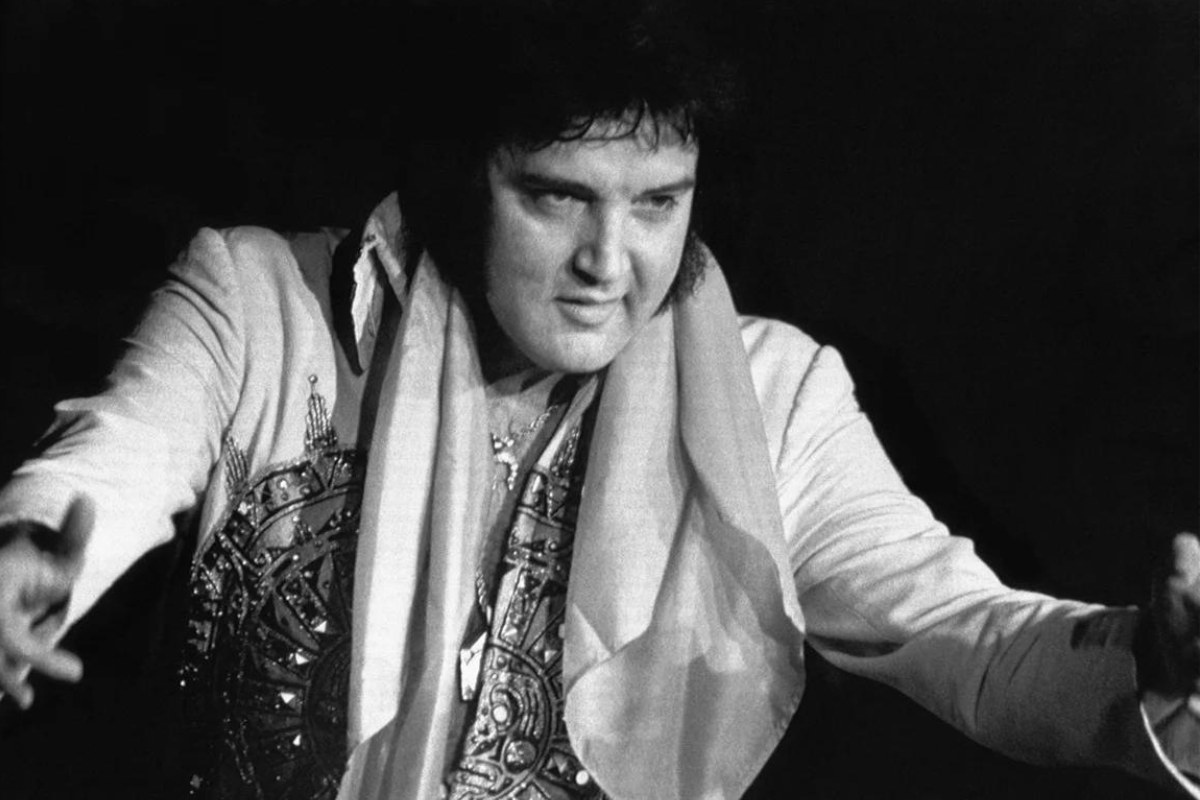 Elvis a few months before his death. Image: Getty.

Not only did the two pathologists find opiates in Presley's system, but they also found evidence of severe and chronic constipation, diabetes and glaucoma, as per PBS.

According to reports, Presley became isolated in his final years – spending almost all of his time in his bedroom – and gained a substantial amount of weight, causing type 2 diabetes.

He had a full-time nurse and reportedly refused to bathe throughout 1975, causing him to develop sores on his body. His chronic constipation from the drugs was so severe that when he died, there was four months' worth of stool sitting in his bowel.

As Elvis' daughter Lisa Marie said on an Instagram live video, it was her family's hope that her dad's legacy was told respectfully and not sensationally.

"Austin Butler channelled and embodied my father's heart and soul beautifully," she said. "In my humble opinion, his performance is unprecedented and FINALLY done accurately and respectfully. You can feel and witness Baz's pure love, care, and respect for my father throughout this beautiful film, and it is finally something that myself and my children and their children can be proud of forever."