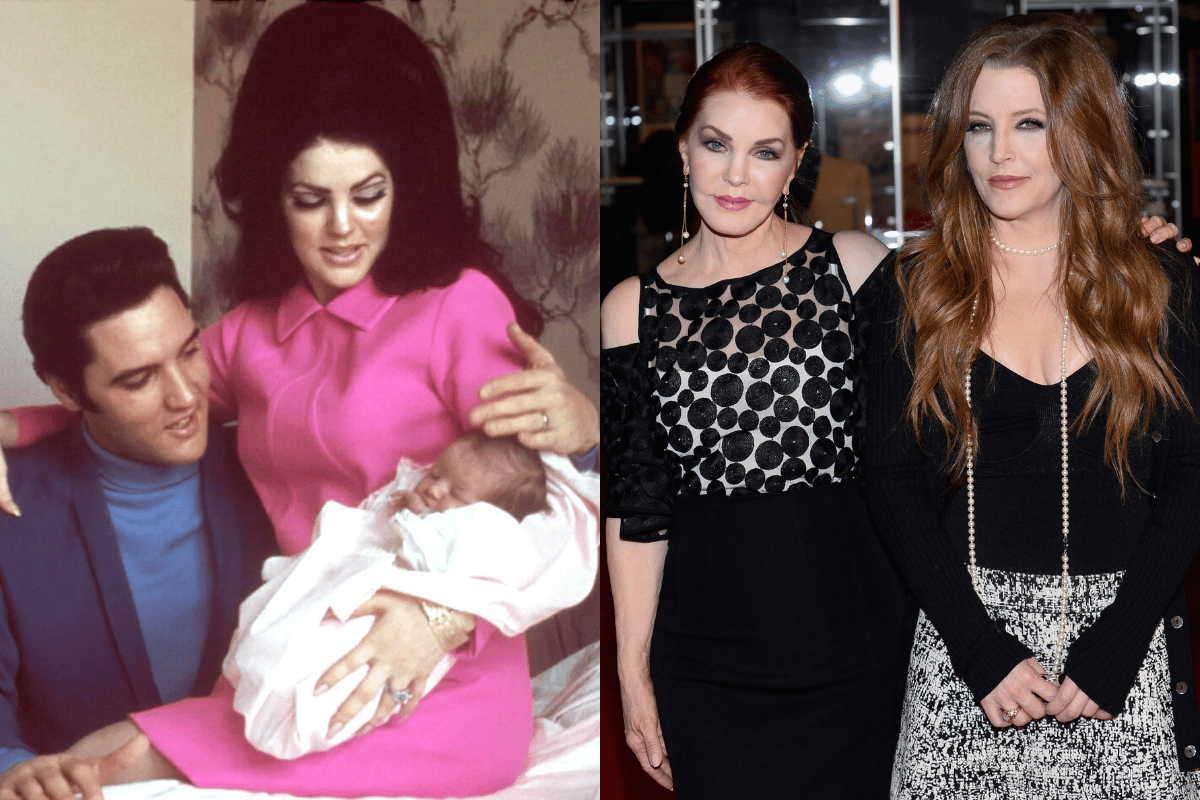 For over 60 years, we have been listening to the king of rock and roll, Elvis Presley.

And over that time, we've poured over the details of his rise to fame, his marriage to Priscilla, and his shock death back in 1977.

But something that's also made headlines has been his family's complicated legacy.

And as one of the most significant cultural icons of the 20th century, Elvis has quite the backstory from a rough childhood, a dad who went to prison, and the manipulation he faced at the hands of Colonel Parker.

Even following his death, the struggles continued for Priscilla, Lisa Marie Presley and her own children.

Tragedy marked the Elvis family from the very beginning.

Elvis was born on January 8, 1935 in Tupelo, Mississippi. His identical twin brother, Jesse Garon Presley, was delivered 35 minutes before him, stillborn.

Years later, his mother Gladys miscarried another child. Growing up, the Presleys required help from neighbours and the government for assistance with food, and in 1938, they lost their home during which time Elvis' father Vernon Presley was jailed for altering a cheque. Some years later, Vernon was released from prison.

They were a close family, however, with Elvis later saying: "My mama never let me out of her sight. I couldn't go down to the creek with the other kids."

By 1958 and with a major fanbase, Elvis was drafted into the US Army and in early August that same year, he was granted emergency leave to visit his mother, who had been diagnosed with hepatitis and was rapidly declining, as well as having a serious drinking problem.

Two days later, she died of heart failure at the age of 46.

Elvis was devastated. He and his mother were known for their 'baby talk' no one else could understand and he addressed her with pet names.

"I lost the only person I ever loved," he later said.

Vernon was 63 years old when he died of a heart attack in 1979, two years after his son passed away. 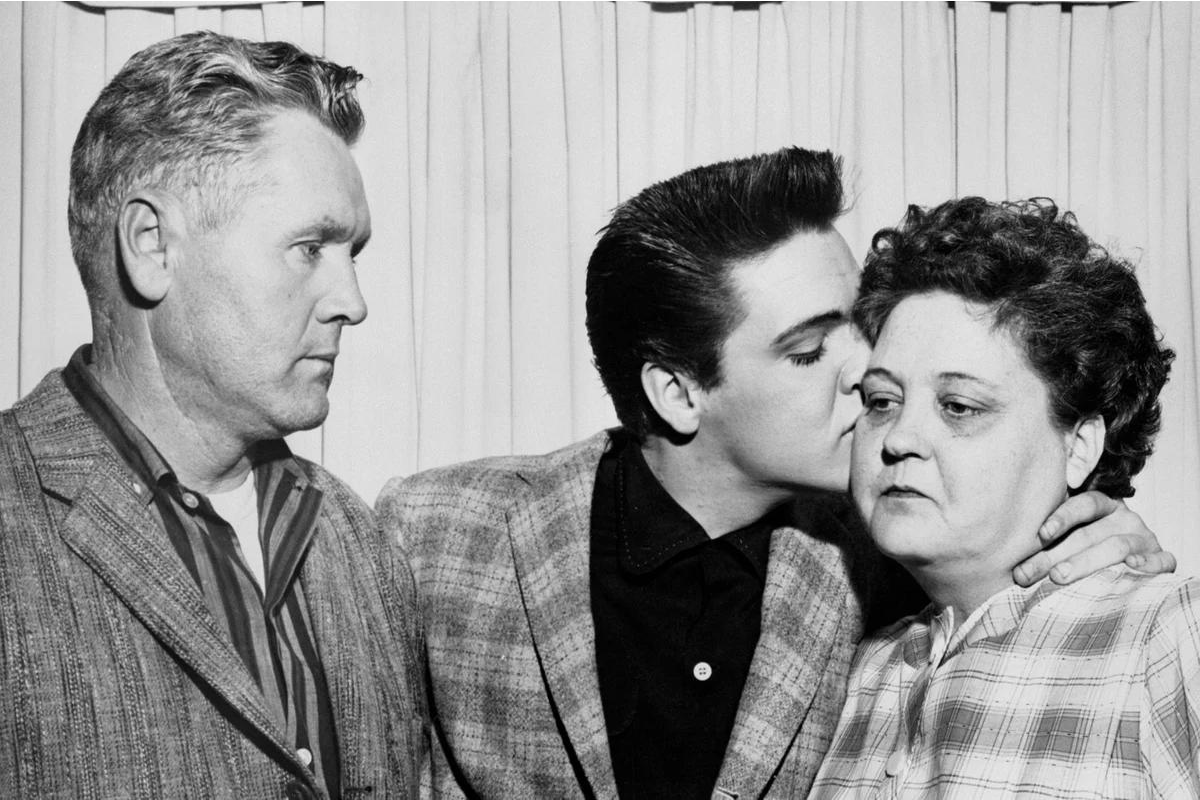 Elvis with his parents. Image: Getty. As for Elvis and Priscilla, they were happy together for a number of years.

But due to infidelity, a rift in communication and Priscilla wanting to "find herself", she left him in 1972 after five years of marriage.

After their daughter Lisa Marie was born in 1968, Elvis reportedly stopped being intimate with Priscilla. Priscilla told Barbara Walters that she believed Elvis struggled to reconcile his image of her as a "little girl" with her as a "mother."

“Our communication was horrible,” Priscilla told Walters, saying that Elvis didn't feel comfortable showing weakness. "He wasn't faithful, not that he had someone special, but when you're in the entertainment business, there is always that and I tried to turn my back to that, but I just didn't want to share him. Simple as that."

When Elvis died in 1977, Priscilla said she was shocked. After all, the pair had remained close with Priscilla saying "we never lost our friendship".

But when Elvis died, it had an affect on Priscilla – both emotionally and financially.

She was now a single mother to Lisa Marie, then nine years old, and although Elvis earned reportedly more than $100 million during the entirety of his career, he apparently only had $5 million left in his bank account upon his death.

The executors of his estate – Priscilla and Vernon – were then tasked with paying major IRS estate tax fees and taking Elvis' manager Colonel Parker to court.

To make matters worse for Priscilla, many of the royalties on Elvis' music were owned by record company RCA, meaning she couldn't make any money from the songs. It left her in a dire financial position.

But she was smart, and decided to take over their home Graceland and turn it into a tourist attraction. It's been reported that by 1993 – 16 years after Elvis' death – that the overall net worth of Priscilla and Graceland was around $100 million. 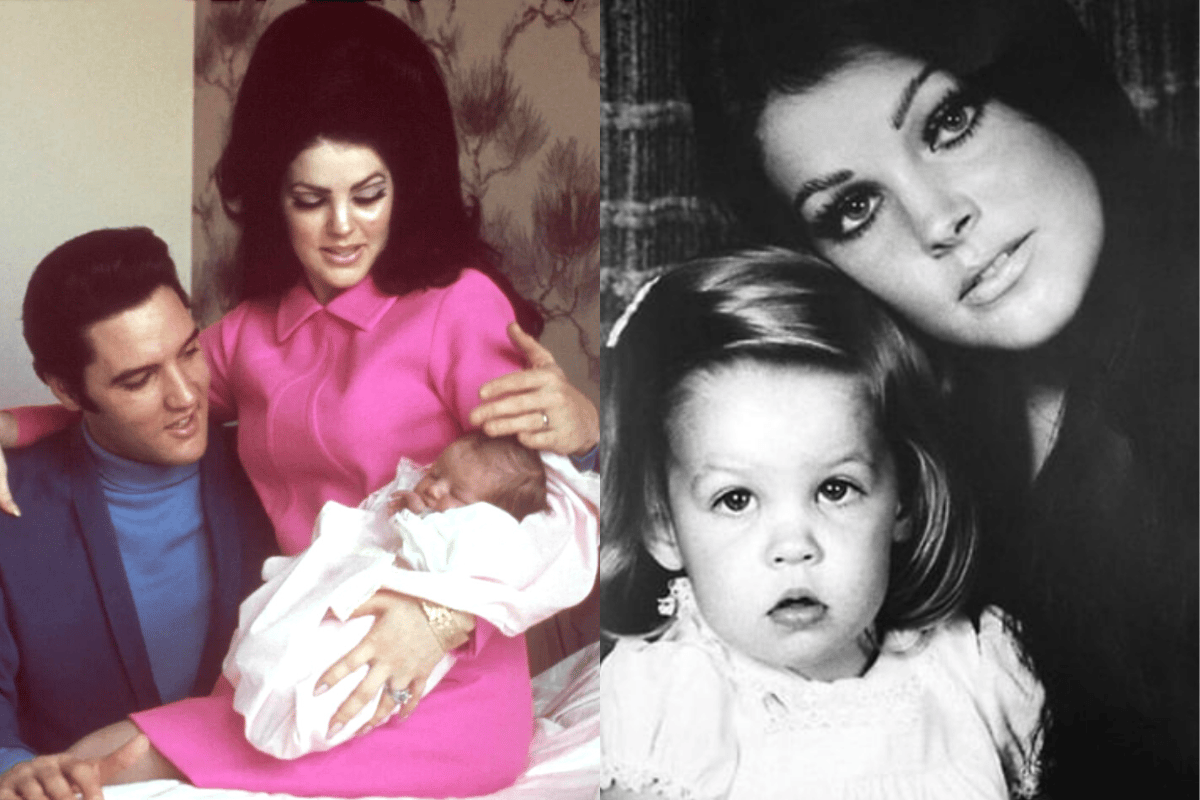 Lisa Marie Presley growing up. Image: Getty/Instagram @lisampresley. Even though the family regained their fortune, daughter Lisa Marie has since struggled with money.

Sadly between 2005 and 2015, nearly all of the money was gone, leaving Lisa Marie in serious debt.

In 2018, she was in the middle of a divorce from her fourth husband, Michael Lockwood, who she married in 2006. She was ordered to pay him $100,000 in attorney's fees, but filed court documents a month before claiming she was $16.7 million in debt. The 51-year-old accused her manager, Barry Seigel's Provident Financial Management, of mishandling her finances and said she had several unpaid credit card bills.

Lisa Marie sued Seigel for allegedly squandering her $100 million fortune by selling 85 per cent of her interest in Elvis Presley Enterprises. At the time, she claimed he left her with a $14,000 fortune.

According to Forbes, Seigel denied the allegations, instead blaming Lisa Marie's debt on her "lavish spending". The lawsuit was settled out of court. And in 2021, Priscilla reportedly sold her LA mansion for a profit to try and assist her daughter's debt.

Over the course of her life, Lisa Marie, now 52, has been married four times and had four children.

She had two children with Chicago-born musician Danny Keough, whom she married in 1988: daughter Riley and son Benjamin.

Twenty days after her 1994 divorce from Keough, Lisa Marie infamously married singer Michael Jackson. After two years of marriage, Lisa Marie filed for divorce in early 1996, citing irreconcilable differences. It was later claimed that Lisa Marie and her children "rarely" stayed in the same house as Jackson during their marriage. 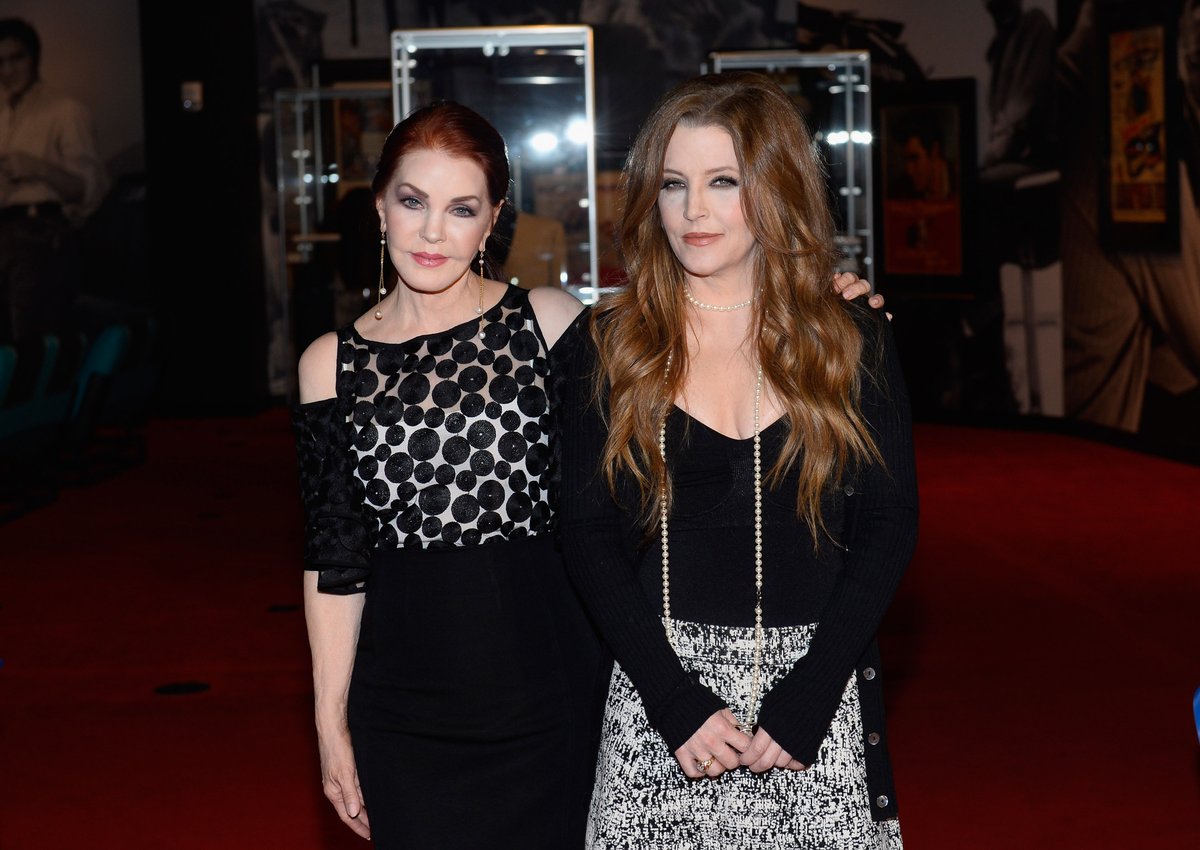 Lisa Marie and Priscilla today. Image: Getty. In August 2002, Lisa Marie married actor Nicolas Cage, who she met at a party. In November that same year, the actor filed for divorce. She later married for a fourth time in 2006 to Michael Lockwood, her music producer, until filing for divorce in 2016. During their marriage, in October 2008, Lisa Marie gave birth to fraternal twin girls, Harper Vivienne Ann and Finley Aaron Love.

Throughout her life, Lisa Marie has also had challenges with drug addiction and alcohol.

In the foreword of Harry Nelson's 2019 book The United States of Opioids: A Prescription for Liberating a Nation in Pain, Lisa Marie shared her experience.

"You may read this and wonder how, after losing people close to me, I also fell prey to opioids," she wrote. "I was recovering after the birth of my daughters, Vivienne and Finley, when a doctor prescribed me opioids for pain. It only took a short-term prescription of opioids in the hospital for me to feel the need to keep taking them."

She said she was "grateful to be alive today... and to have four beautiful children who have given me a sense of purpose that has carried me through dark times."

And dark times Lisa Marie has been through indeed.

In 2020, her eldest child Benjamin died by suicide aged 27. It was a major loss for the whole family, with Lisa Marie saying she has been struggling with the grief ever since.

At the time of his death, she wrote on Instagram: "My beautiful, beautiful angel. I worshipped the ground you walked on, on this earth and now in Heaven. My heart and soul went with you. The depth of the pain is suffocating and bottomless without you every moment of every day. I will never be the same. Please wait for me, my love, and hold my hand while I stay to continue to protect and raise your little sisters and to be here for Riley. I know you would want that. You were much too good for this world."

Priscilla has also spoken publicly about the loss, calling Benjamin's death "one of the darkest days of my family's life".

"The shock of losing Ben has been devastating," she wrote on Facebook. "Trying to put all the pieces together of all the possible 'whys' has penetrated my soul. Each day I wake up, I pray it will get better. Then, I think of my daughter and the pain she is going through, as she was a doting mother. Ben's father, Danny [Keough], who is completely lost, as Ben was his only son. Rest In Peace Ben, you were loved."

Recently coming back onto social media, Lisa Marie said: "I am and will forever be mourning the loss of my son. Navigating through this hideous grief that absolutely destroyed and shattered my heart and my soul into almost nothing has swallowed me whole."

She went on to say that watching Austin Butler and Baz Luhrmann's work in the new Elvis movie has helped her through the grief.

"Austin Butler channeled and embodied my father’s heart and soul beautifully. In my humble opinion, his performance is unprecedented and FINALLY done accurately and respectfully. What moved me to tears as well was watching Riley and Harper, and Finley afterwards, all three visibly overwhelmed in the best way possible way, and so filled with pride about their grandfather and his legacy in a way that I have not previously experienced," she said.

She went on to say that it also breaks her heart that her son isn't here to see it, as he would have loved it, and seeing his family story come to life.

As Priscilla said about their complicated legacy and Elvis' life: "The story, as we all know, does not have a happy ending. But I think you will understand a little bit more of Elvis' journey, penned by a director who put his heart and soul and many hours into this film."