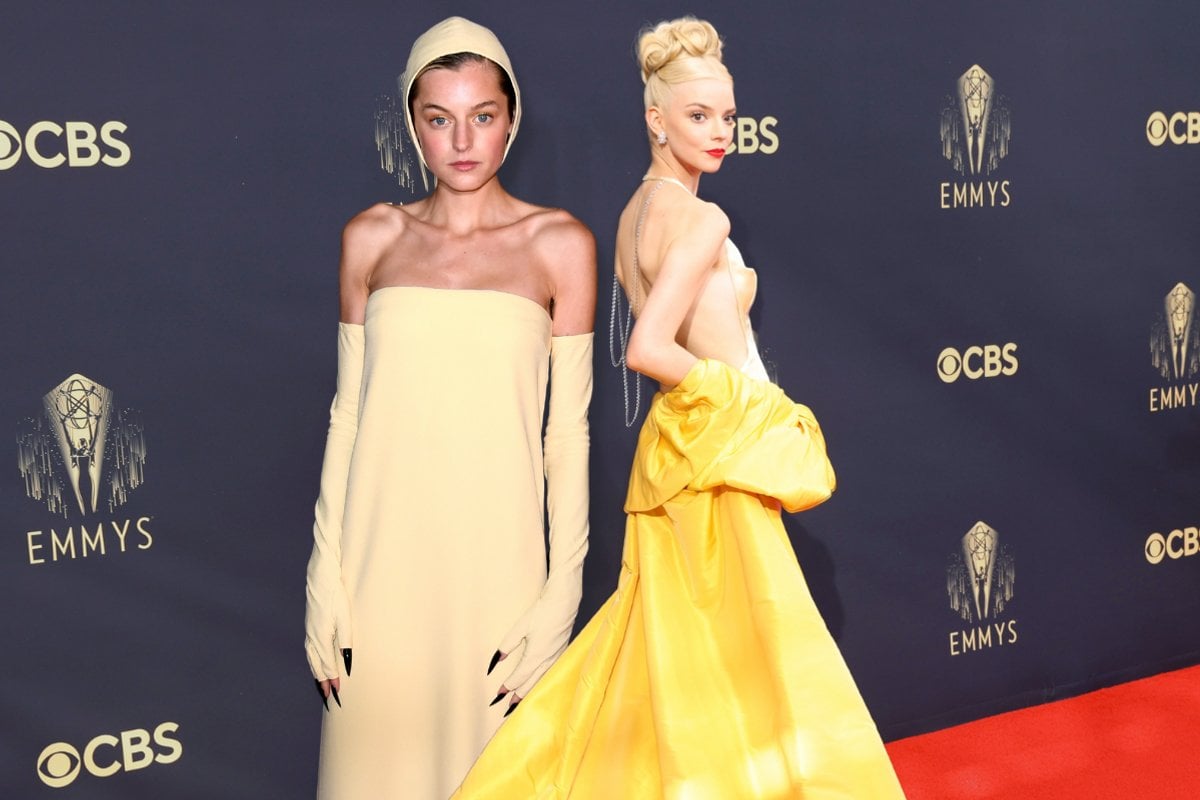 There was a time where all you saw on red carpets were collarbones and shoulder blades.

Working at a weekly tabloid magazine in the mid-2000s, during awards season it was my job to download the images of starlets as they hit The Oscars or The Golden Globes, and pull together 'best dressed' lists.

Back then, the criteria for making the cut was to be suitably A-list, beautiful, slim, and wearing a gown.

Achingly thin was in. Rachel Zoe was the most prominent stylist working in Hollywood, and many of her acolytes adopted her signature look: waif-like, shrouded in vintage designer clothes with Balenciaga handbags that outsized the entire circumference of their mid-section, and Starbucks Venti lattes the size of their heads.

The 'Zoe-bots', as they were known in the media, included celebrity pals like Mischa Barton and Lindsay Lohan. 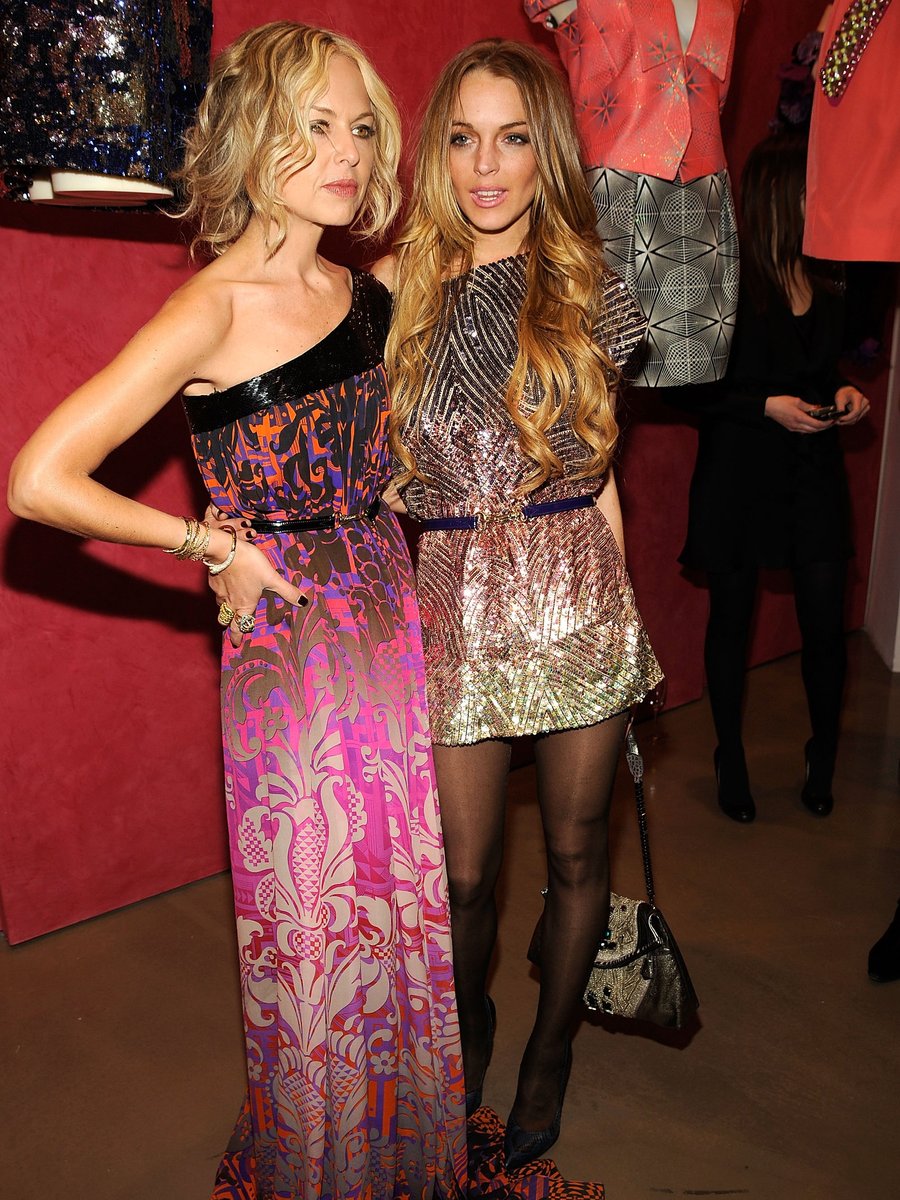 It was a time when to be fashionable meant to be tiny.

When Nicole Richie signed on to the stylist's client list, she famously shrank down to Zoe-like proportions.

It seemed that in order to rebrand her image, Richie had to change her shape. Seemingly overnight, she went from the good-time loving, Ugg boot-wearing star of The Simple Life to a style icon, sitting front row at Fashion Week.

Of course, this is not intended to take away from Zoe's success as a stylist and businesswoman, who has worked hard to become one of the most influential forces in American fashion. Because both things can be true - indeed, her influence was felt in more ways than one. 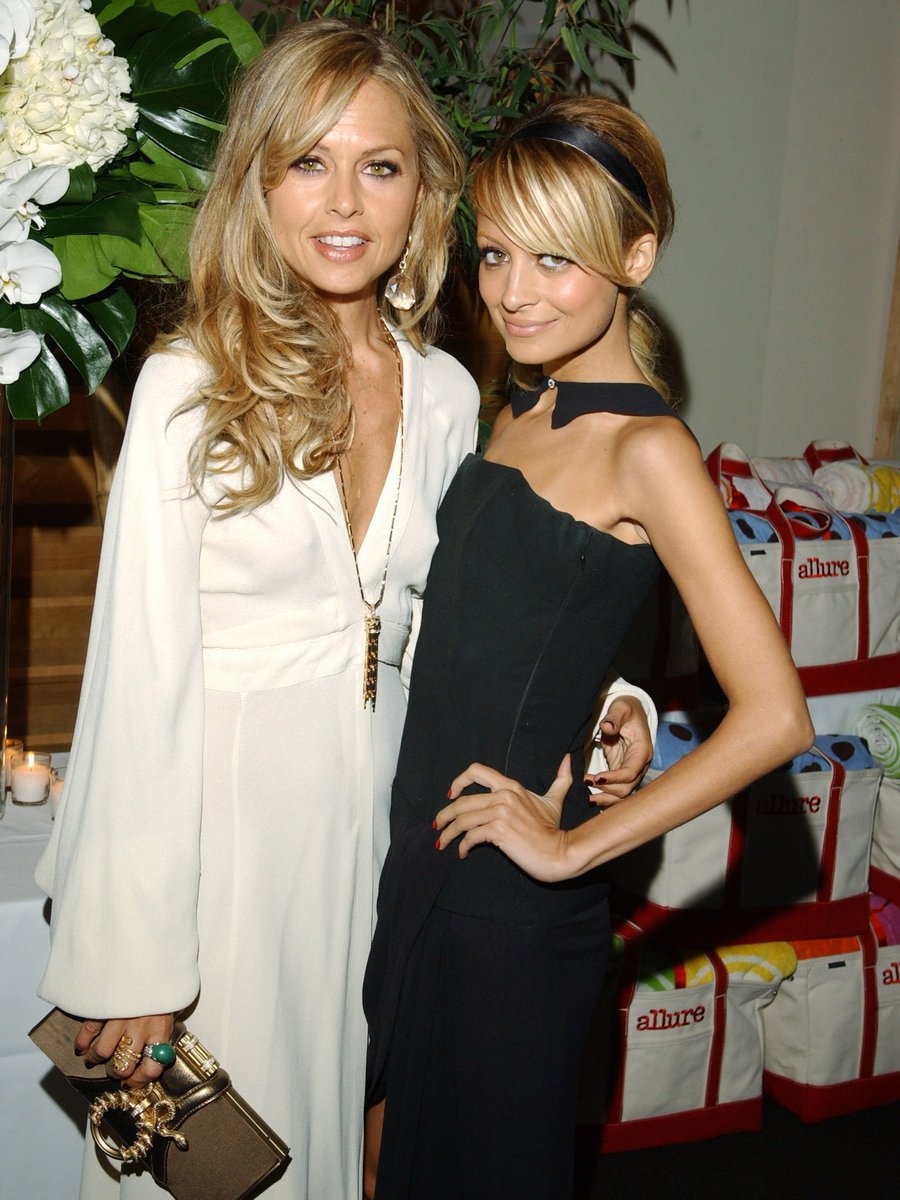 Nicole Richie's transformation forced women of her generation to confront a scary possibility: that skinny equals stylish. And we lived uncomfortably with that realisation for several very problematic years, where Lindsay, Nicole and Mischa fronted magazine covers, held up as the arbiters of cool.

But then they weren't anymore.

Because waiting in the wings were the Kardashians, who - say what you will about their legacy - made curves fashionable again.

Their image broke the mould, ushering in a new aesthetic that came with its own set of challenges (oh good, another unrealistic beauty standard to live up to.)

But in the past few years, a new generation has emerged, determined to unpick the insidious codes that the ones before embedded. Curvy, slim - who cares? Self-expression, body positivity and inclusivity have come to the forefront.

On red carpets in 2021, the cookie-cutter approach no longer flies. Style is no longer synonymous with 'thin', and there's certainly more representation of the diverse people and talent that make up the artist communities being celebrated at award shows.

Yes, there were models repping their designer buddies at last week's Met Gala, but there was also Whoopi Goldberg in Valentino, Indigenous model and activist Quannah Chasinghorse in traditional Navajo jewellery, plus-size supermodel Paloma Elsesser in curve-hugging Zac Posen, Elliot Page in a Balenciaga suit, and the greatest representation of de-gendered fashion we've seen at a mainstream awards show (see: Pete Davidson in a skirt). 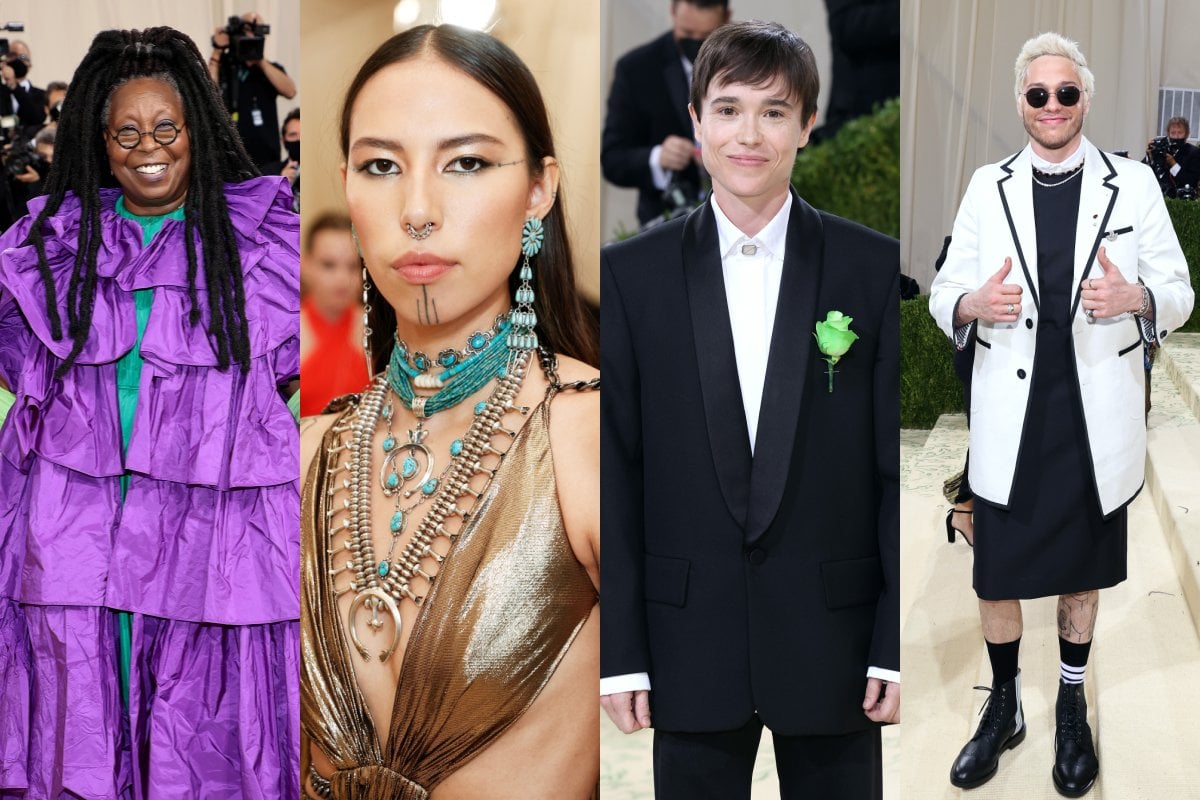 The Met Gala presented a broad spectrum of fashion, and what it means to individuals.

Which is why, at Monday's Emmy Awards, seeing two specific outfits singled out as fashion-forward amongst the red carpet commentary was jarring.

The Crown's Emma Corrin and The Queens Gambit star Anya Taylor-Joy are both celebrated actors. Both wore intricate yellow gowns, but so did a lot of celebrities, as it turned out. 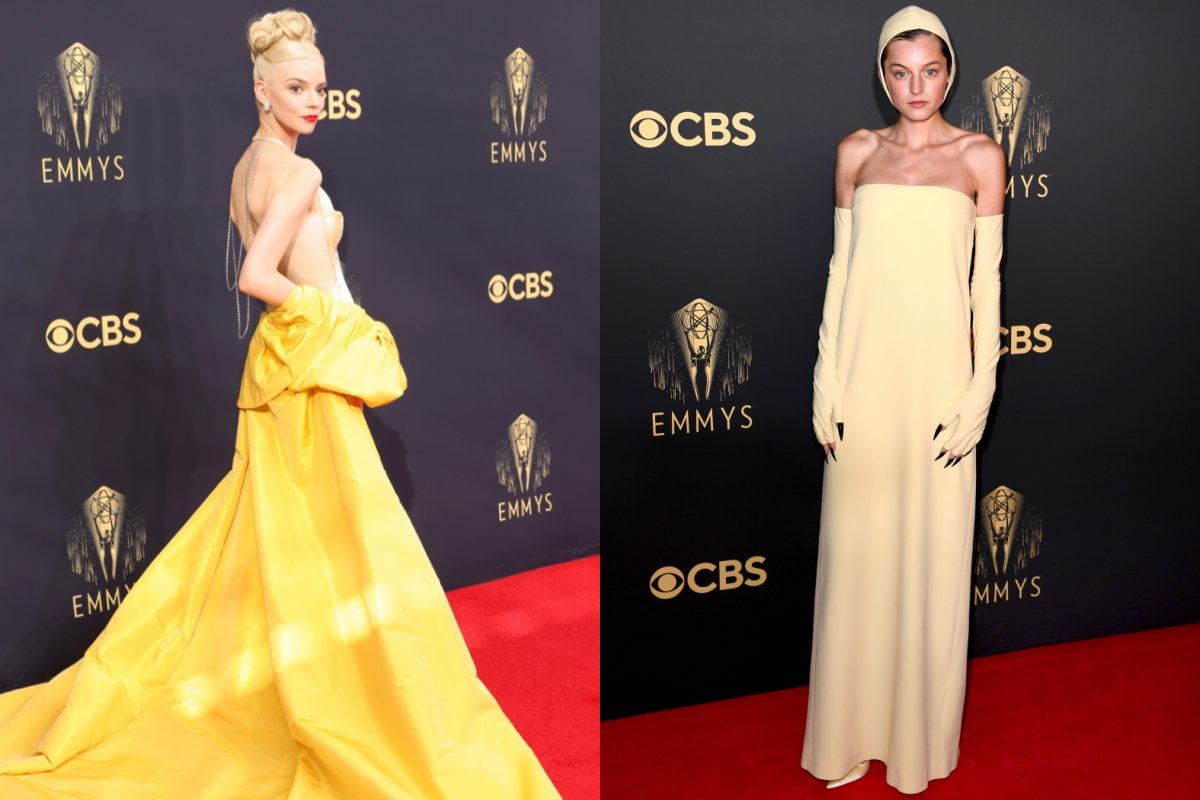 The difference was in how these outfits were received.

By one outlet, Corrin's look was deemed an "instantly iconic ensemble".

And The Cut wrote of Taylor-Joy: "I'm not entirely sure that Anya Taylor-Joy is of this earth," going on to say that "she looks like a gazelle and a mannequin had the most beautiful baby."

But as Mamamia's Clare Stephens asked on our entertainment podcast, The Spill, is it fashion-forward... or are they just thinner?

Corrin, who identifies as non-binary, was the talk of the Emmys red carpet for a few reasons - the bizarre Handmaid's Tale-esque hood, the black claws - "but undoubtedly, their look was praised more than it would've been on a different body," Stephens added.

We have to ask ourselves: Why do these outfits in particular read as fashionable?

As Stephens explained, "I don't think either of these looks are about the clothes that they're wearing - I think they're about the bodies that are wearing them."

Listen to our full Emmys recap here, including Laura Brodnik and co-host Clare Stephens' take on how the fashion was reported. Post continues below.

It's long been a cliche that model types can wear anything. A fallback excuse for designers when asked why their runways only show super-svelte bodies: 'The clothes just look better on them.'

Now, thankfully, that's being disproven. Fashion is evolving, albeit slowly.

Earlier this month at New York Fashion Week, designer Jeremy Scott for Moschino showed one of the most diverse high-fashion runways maybe ever. 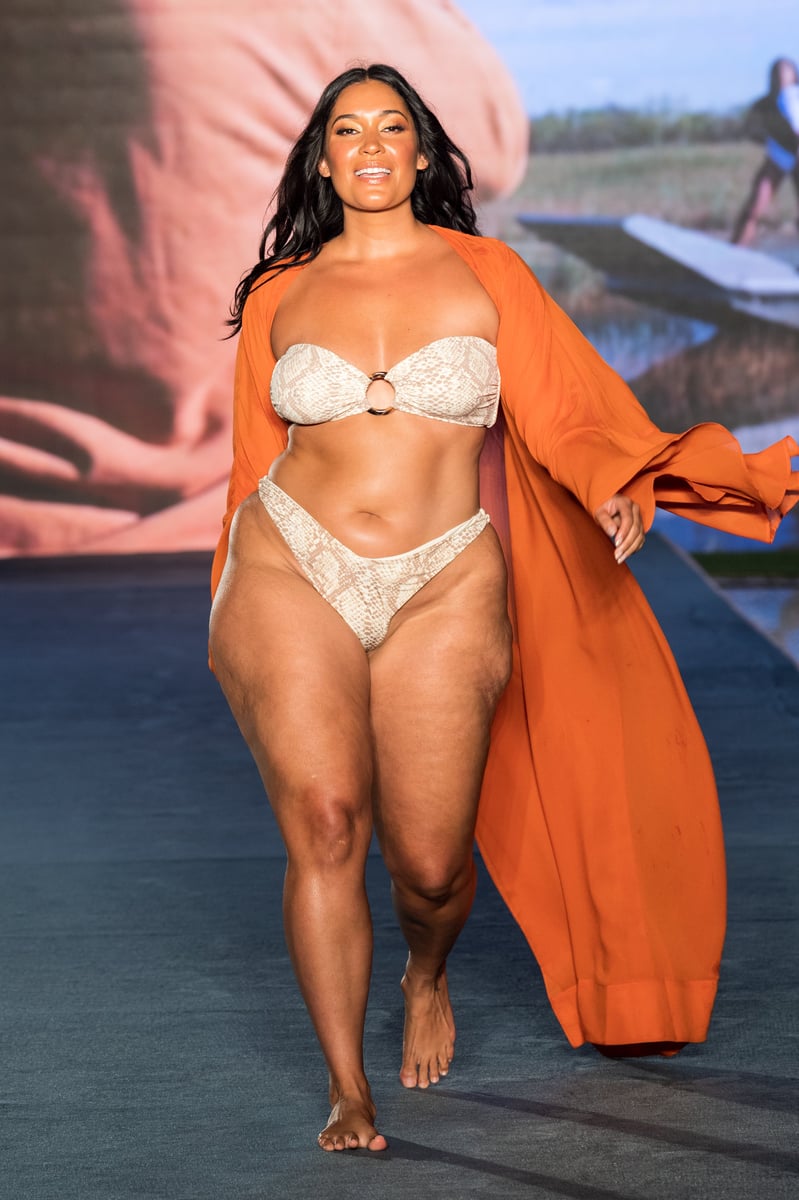 In 2021, we know that every body is worthy of fashion.

One day the oversized Balenciaga bags of the Rachel Zoe era might be in again.

But let's not bring back the body image baggage.

Reply
Upvote
3 upvotes
As someone who has been 50kg and 100kg over my lifetime, I would say people are nicer the thinner you are.  You stay the same person on the inside but you have more social worth the thinner you are. The most Important thing is to value yourself no matter what the size of your butt is. Also to be kind to people no matter the size of theirs.
J
jaas 8 months ago