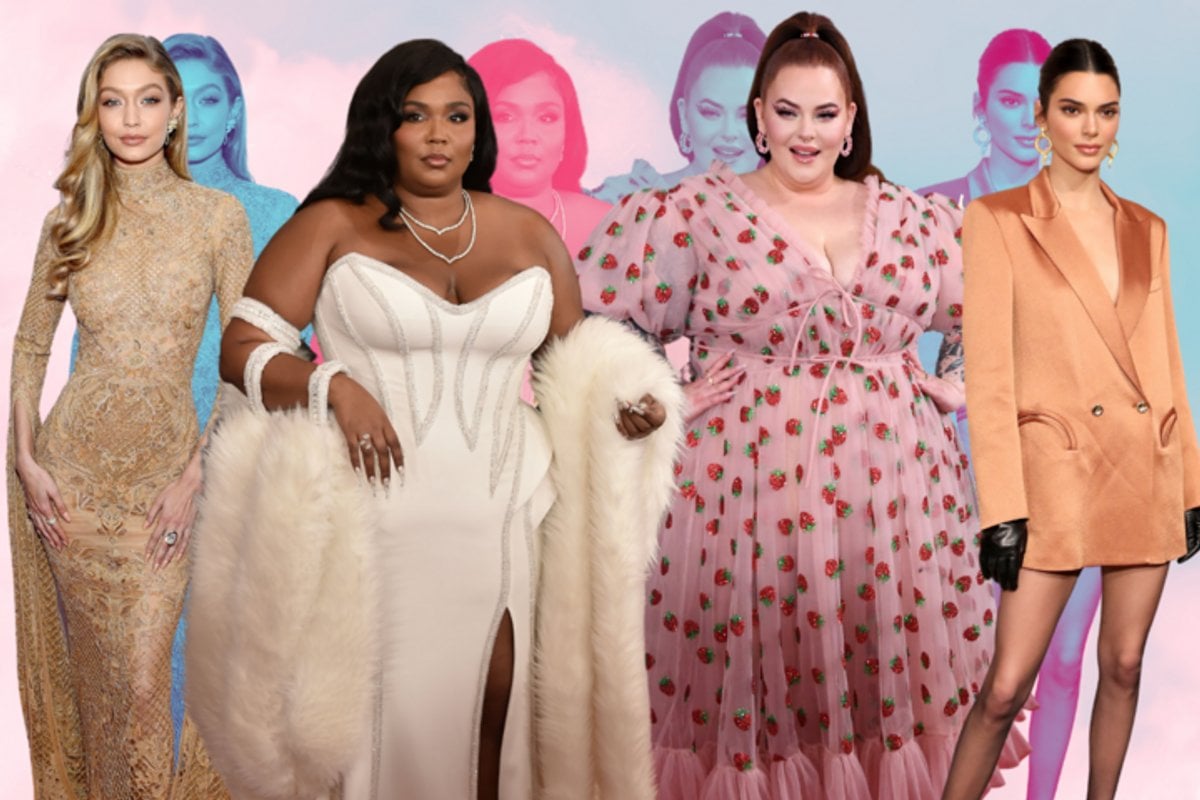 But if you’ve ever cast an eye across modern media, you’ll know that’s just not true.

When it comes to social currency, ‘stylish’ is one of the coveted accolades women delight in finding within the comments section of their latest Instagram posts.

Unlike being called ‘beautiful’, which infers you’ve just scored extra points in the genetic lottery, stylish is an otherworldly term that elevates you - implying that you have a skill, an instinct, a vibe that's worth commending.

And yet, it’s a term only afforded to a certain group of women.

If you closed your eyes and thought honestly (and I mean honestly, now) about the women in both the public eye and within your own inner circles who are universally labelled as ‘stylish’, chances are the second word you’d truthfully use to describe them is ‘thin’.

This way of thinking doesn’t necessarily mean you have a judgmental, fat phobic little gremlin tucked away in your subconscious who is calling all the shots (although some people certainly do).

Instead, it’s all just part of the internal bias that’s so deeply ingrained in all of us.

So much so that even if you live in a body that could be viewed as 'overweight', your eyes have still been trained to equate body weight with style.

In recent months the topic of thin privilege and its equation to style has been widely debated in the public sphere thanks to designer, author and plus-size model Tess Holliday.

Tess, who has always been an outspoken advocate for positive body image, published a post on Instagram blatantly calling out the way thin privilege is slicked over every surface of fashion culture.

In January, the model walked the red carpet at the Grammy Awards in a strawberry-covered dress by Lirika Matoshi. A dress which had been crafted especially for her after Tess spied a picture of the gown and fell in love with it.

Just like clockwork, she was then placed on a number of ‘worst dressed’ lists (many of which have now mysteriously disappeared) and the comments across social media channels were less than complimentary towards her, to put it mildly.

Then, as if the thin privilege fairy had gently secreted her magical fat phobic dust all throughout the crevices of TikTok, the dress suddenly went from a fashion dud to a fashion love.

Once placed on the bodies of thin women and strewn across the popular video-sharing app, the strawberry creation suddenly became the most coveted garment of 2020.

I like how this dress had me on worst dressed lists when I wore it in January to the Grammys, but now bc a bunch of skinny ppl wore it on TikTok everyone cares. 🤷🏻‍♀️ To sum it up: our society hates fat people, especially when we are winning. Thank you @lirika.matoshi & @meaghanpoconnor for making me feel like a princess 7 months ago 🍓💖✨

The blatant hypocrisy highlighted by Tess’ post spawned a slew of outraged reactions on her behalf, with news sites enticing readers to clutch their pearls in shock while being faced with fashion's "surprising" double standards.

But for plus-size women, Tess' point of view was as run-of-the-mill as feeling underwhelmed by a New Year’s Eve party.

If you look closely at the majority of women who are lauded for their style on platforms such as Instagram, then you begin to notice that praise for bodyweight is often replaced with the more socially acceptable praise for style.

A thin woman can clad herself in anything from the questionably trendy bike shorts and blazer combo, to tracksuit pants and a crop top or even something as basic as fitted denim shorts and a white shirt and instantly be classified as a winner in the style stakes.

All because their bodies hold the clothes in the only way that movies, media and magazines have taught us is acceptable.

This fault does not lay at the feet of the Kendall Jenners, Kaia Gerbers, Gigi Hadids or Hayley Baldwins of the world, but the way the world chooses who to praise and who to ridicule, based on weight.

In this photo series she dresses in plus-size versions of the same outfits 'stylish' celebrity figures are lauded for, all in an attempt to crush the never-ending narrative around 'who wore it best' and show that style is for any size.

Unfortunately, this inclusive exercise can be met with vitriol (mainly when shared by external outlets) because she is attempting to place herself in the same style category as smaller women, despite the fact the outfits look identical.

#SuperSizeTheLook Royal Edition👑 I love this clean summer look and both Kates! Remember, it’s not about who wore it better❤️ (dress by @11honore ) 📸: @splashnews

Thankfully, due to the fact that social media influencers have been able to take the reins from magazines when it comes to the content we’re seeing, plus size women are now carving out space for themselves in the style stakes.

Yet with every step forward, where our social feeds fill with images of bigger bodies clad in lavish dresses and sleek suits, designed to be on show rather than hidden away, we are also reminded there is still a long way to go.

There is still the harsh reality of thin privilege lurking beneath our fashion commentary, and the reality is that plus-size woman are held to a different set of rules, at every level of critique.

There's no denying that when a traditionally thin woman dons a simple tracksuit, especially if she has a flat stomach on display, her "style" will be coveted by millions of women not subconsciously realising that what they really crave is a body society deems beautiful, and not an actual outfit.

If a plus-size woman dons a fashionably casual look, she runs the risk of being labelled sloppy or lazy - ignoring the simple fact that a tracksuit is her chosen aesthetic.

Adding my fat body to the thousand of images of thin girls wearing sweatpants to fight the idea that plus-size people in sweats are lazy, sloppy or letting themselves go. Keep swiping for a cute surprise. #plussizefashion #bodyliberation #fat #athelisure #sweatpants

Recently award-winning musician Lizzo donned the cover of Vogue and proudly declared her pride at being the “first big Black woman” to do so.

Sidestepping the tiresome rhetoric around how “inspiring’ she was for taking part in the photoshoot (it’s worth noting that thin women are never praised for simply not being ashamed of existing) the true grit of this moment could be found within the magazine's pages.

“I would like to be body-normative,” she told Vogue.  “I want to normalize my body. And not just be like, ‘Ooh, look at this cool movement. Being fat is body positive.’ No, being fat is normal. I think now, I owe it to the people who started this to not just stop here. We have to make people uncomfortable again, so that we can continue to change. Change is always uncomfortable, right?”

In the spirit of Lizzo's words, I now have to hold myself accountable to an uncomfortable truth.

One that is so deeply hidden within my mind that you'd need a golden retriever with a background in forensics just to find it.

And that is, even as a plus-size woman myself, I could look at side-by-side images of Tess Holliday and a thin TikTok influencer both wearing the same dress and my first instinct would be to think the thinner woman looks better.

Just for a split second.

Just for a moment, before my brain recalibrates and quickly unlearns the decades of size and style rules that have resided there since childhood.

We all have a lot of unlearning to do before we have a chance at living in Tess and Lizzo's ideal world, a place where body neutrality reigns, style is not guided by size and women are not governed by a fashion hierarchy.

A world where anybody can wear a strawberry dress.

C
caz gibson a year ago

Reply
Upvote
3 upvotes
One of the most stylish women in Australia was Maggie Tabberer who was not waif like as she got older.    Style has nothing to do with weight, because if it did the majority of us would be doomed.   The 'perfect' figure for clothes, according to male designers, is a 6 foot amazon with tiny boobs and no hips, an impossible benchmark to begin with.
News
General
Opinion
True Crime
Politics
Sport
Explainer
Entertainment
Celebrity
Reality TV
Movies
TV
Books
Rogue
Royal
Lifestyle
Beauty
Fashion
Weddings
Home
Wellness
Health
Fitness
Travel
Food
Parents
Before The Bump
Pregnancy
Baby
Kids
Teens
School
Parent Opinion
Work & Money
Money
Finance
Career
Lady Startup
Relationships
Sex
Dating
Separation
Friendship
Family
Real Life
Couples