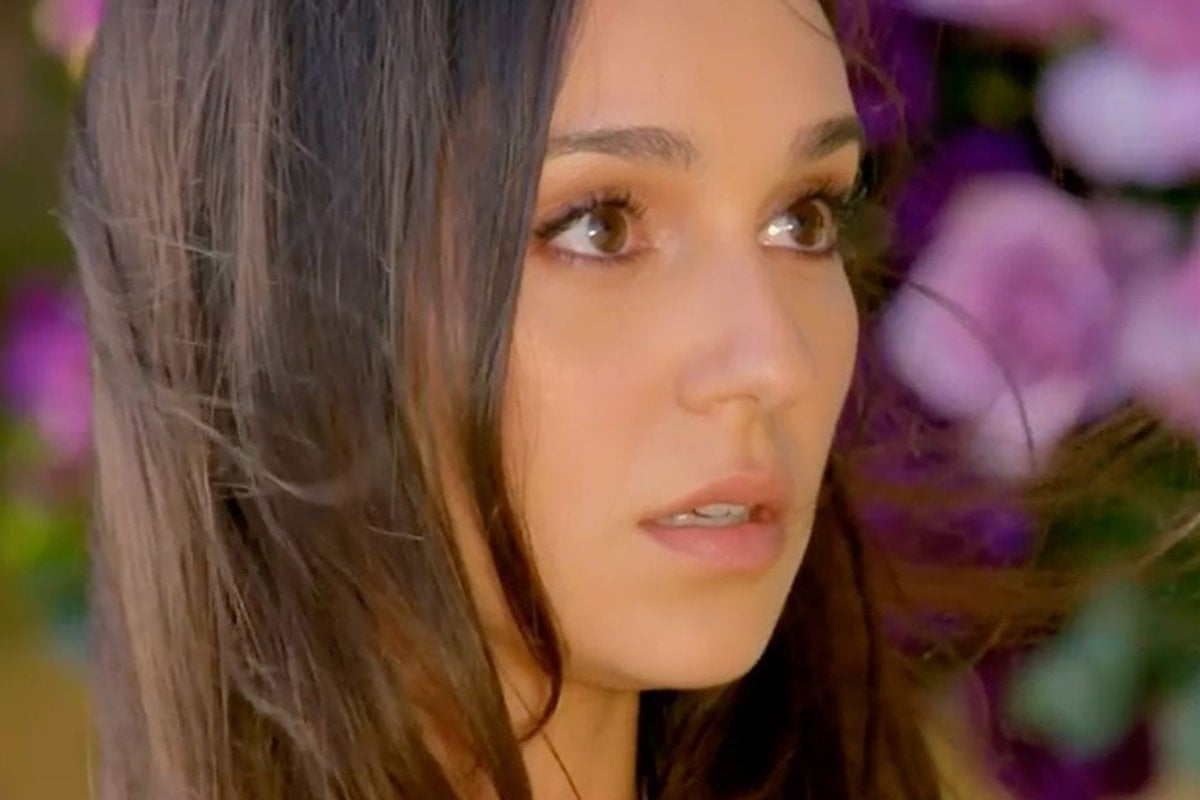 Well, that was a lot.

After a bunch of dramatic walkouts, some awkward lockdown episodes, and far too much PDA, Locky Gilbert’s season of The Bachelor finally came to an end on Thursday night.

In the final moments of the episode, Locky brutally dumped Bella Valeris on national television… just after boldly telling her that he was falling in love with her.

After Bella dramatically left the scene, Locky chose Irena Srbinovska as his winner... surprising precisely no one. ¯\_(ツ)_/¯

But as we all know, it’s often after the finale wraps up that the real drama starts to come out.

Now that Locky and the contestants can openly talk about their experience, here's all the post The Bachelor finale gossip in one place.

Apparently Locky texted Bella the night before the finale to "reassure her" that she'd be the winner.

On last night's finale episode of The Bachelor, it was well and truly clear that runner-up Bella Valeris had been taken for a ride by Locky's emotions.

On their final date, Locky told Bella he was falling in love with her... before dumping her on national television.

But it seems there's a little more to the story.

According to The Wash, Locky allegedly texted Bella before the finale to "reassure her" that she'd be the winner.

"Locky gave her a lot of reassurance that it was going to be her at the end. He even texted her saying he couldn’t wait to make her happy for the rest of her life and talked about engagement rings," an anonymous source, who was reportedly "present for the majority of filming", claimed.

"It has been heart shattering for her. [Bella] really thought this was going to be her happily ever after," the source added.

"All the girls and the crew expected it was going to be Bella at the end. After filming, the other girls were all sending her messages and saying things like, 'We know you can’t say, but we know you’re with him'. She had to put on a brave face and act like she was okay, trying not to give away the outcome."

It turns out Bella is open to being The Bachelorette.

Yep, Bella Valeris is very much open to appearing on The Bachelorette in 2021.

On Monday's episode of the So Dramatic! podcast, host Megan Pustetto shared that discussions about The Bachelorette and Bachelor in Paradise apparently began on the very first night of filming.

"On the very first night of filming, all the girls were already discussing [Bachelor in Paradise]. Some of them had already made their minds up that they weren't going to end up with Locky," Pustetto claimed.

"Bella in particular was even saying that she wanted to be The Bachelorette."

Speaking to the Kyle and Jackie O Show on Friday morning, Bella responded to the persistent rumours.

"I don't think I would do Bachelor in Paradise because I don't want to put myself through the risk of being chosen over someone else again. I think that would absolutely break my heart," Bella said.

"But The Bachelorette, it's kind of getting your own love story and your own fairytale and I would absolutely love that."

Oh. Locky has responded to a bunch of his critics on Instagram.

After months of remaining quiet on social media, Locky has responded to some of his critics on Instagram.

As the So Dramatic! podcast pointed out, Locky has been "going on an unhinged commenting spree".

In response to one woman who referred to Locky as a "good actor", Locky wrote: "Haha okay Karen."

As for another follower, who claimed "Bella dodged a big bogan bullet," The Bachelor star responded: "Haha but you are the one invested in my life so much. You need a hobby."

Another follower wrote: "What a terrible show that goes against everything Australia is trying to improve, respect towards women. This show treats women like a piece of meat and demonstrates that it's okay to think women are here for male pleasure."

In response, Locky commented: "But you still watch it and follow my adventure. I'll just set up my camping chair in your head and settle in."

How Bella responded to the finale.

After the final episode aired, runner-up Bella Valeris finally had her say, sharing a statement on Instagram.

"I’m not entirely sure where to even start... When Locky told me he loved me and couldn’t wait to make me happy for the rest of my life, I believed him and trusted him whole heartedly. We connected on so many levels right from the beginning, some you saw, but most you didn’t," she wrote.

"Having three months outside of filming completely changed the aspect of the show, it brought normality to the connection and we grew into what felt like a real relationship. Looking back; I’m proud of myself. I gave it my all, I was true to myself and I wore my heart on my sleeve," she continued.

"Whilst it’s not my fairytale ending, the laughs and the memories will last a lifetime. I want to say thank you to my on-set Bachelor family who were with me up until the very end, thank you for making me laugh through my endless tears that night.

"To everyone that supported me on this crazy journey, the people out there who don’t even know me but continue to keep the vibes positive and especially the people who got me through a few of the hardest moments, you know who you are, and you’re the real ones. I’m a firm believer that things happen for a reason and now was not my time, I’ll never stop being a hopeless romantic and I’m sure my happily ever after is still out there.

"Hopefully, I don’t need to kiss too many more frogs."