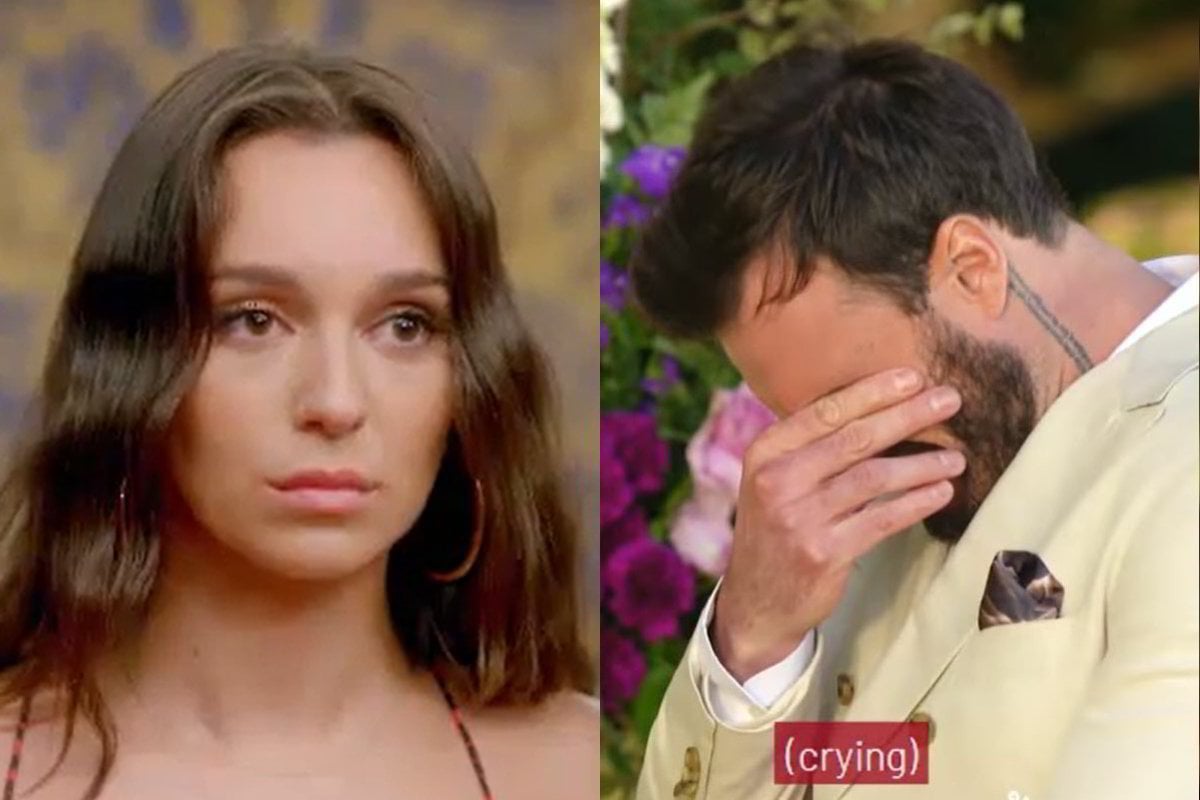 We haven't achieved much in the past few months, but it appears we are not alone.

For the Bach himself Locky Gilbert may have filmed an entire season of The Bachelor only to end up... single, still, at the end of it all.

That is one of the enduring rumours circling ahead of Thursday night's finale, ending six weeks of drama and about half an hour focused on the actual reason (besides Insta followers) everyone is there: love.

From promos we've already seen, we know we're in for a very messy final ep, with Locky openly admitting he's in love with both of his final women (tipped to be Bella and Irena, FYI).

"You don’t break up with someone you love," he said, breaking down.

So how does it all go down? We can't say for sure, but as per usual, there is plenty of gossip and 'insider' info swirling. We've rounded it all up in one very juicy place:

Rumour one: Locky picks Bella, she rejects him, so he begs for Irena to take him back.

I bet our old friend the Honey Badger would really dig this finale, which would definitely take his season's crown for most shocking outcome.

The rumour comes from a number of Facebook groups and the Daily Mail - obvs - and it states that Locky picked Bella, but she decided she couldn't be with him after hearing he was also in love with Irena.

This allegedly left Locky to go back to Irena, who he'd just dumped, to beg her to end up with him.

This should seem unlikely, but after this clusterf**k of a season, anything seems possible.

Now, pre-Bach going to air, Locky told Mamamia he was very much in a relationship with his final lady.

"I am extremely happy with the outcome," he said. "My love grows deeper and deeper every day and I can't wait for the rest of my life."

But another rumour suggests the situation has changed since then and he's single.

On an Instagram photo, a fan commented, "You’re too good for him tho!!!"

There's a good chance she accidentally did that (we've all done it) but we can't help but think it's a sign that they may have broken up after filming the finale.

But Locky has been in damage control mode recently, telling New Idea has was "110,000 per cent" in love and excited to be open about his relationship after Thursday's ep.

Rumour three: Locky picks Irena, they're still together, but COVID is keeping them apart.

This is probably the least ~scandalous~ and most likely rumour of the bunch.

Firstly, he's from Western Australia and Irena is from Victoria so COVID-19 border restrictions would make it impossible for them to see each other right now.

Secondly, The Wash discovered Irena's brother Igor follows Locky on Instagram - the only family member of any of the final four who follow him - so that's a positive sign.

Locky has confirmed he's still with his winner, and the So Dramatic! podcast has also been told by sources they're together - and maybe even looking towards getting engaged.

Rumour four: Locky picks Irena, they're still together, but their relationship is rocky because of his lockdown behaviour.

So Dramatic! has been sharing a lot of very important investigative journalism this season, sharing all the juicy details on Locky's... interesting behaviour throughout filming.

As revealed on the latest episode of So Dramatic! During Lockydown, our CEO superspreader @lockygilbert went on an unhinged liking spree on Instagram and was giving out love hearts left right and center to a number of stunning girls in bikinis and lingerie! ❤️❤️❤️ On his hit list were quite a few reality TV babes including @ellymiles @francoisedraschler @jessiereneewynter and @travelsofclaire @laurenalex___ (I’ve attached a small selection of the screenshots from my stalking over a couple of days - imagine how many there would be for the whole three months!)😏 Do you think this is appropriate behaviour for The Bachelor when he’s already “dating” 10 other women? 🤷🏽‍♀️🦠💋 #thebachelorau #thebachelor #superspreader

It’s all coming out now!! @aleks.markovic_ from @mafs has confirmed the bombshell claims that I made in the latest episode of So Dramatic! that Locky was sleeping around with other girls in Perth during Lockdown in an interview with @filipwithanf !!!! 😱😱😱😱 #thebachelorau #thebachelor

Basically, he was talking - or uh, more than talking - to other women throughout lockdown and filming, and a 'source' told New Idea his winner was not impressed.

"It's understandable she was upset really. No woman wants to find out her boyfriend has been flirting with other women - especially so publicly on social media where everyone can see it," they said.

In a new podcast episode, So Dramatic's Megan Pustetto said Bella had planned to move to Los Angeles this year to kick off her acting career, but was offered a spot on The Bachelor.

According to the podcast, Bella's management negotiated a contract which guaranteed her a spot in the top two.

Locky had wanted to send her home after all the drama with Irena, and allegedly had more of a connection with Bec, but he was forced to keep her around because of the contract.

Oooooh. Frankly, we're shocked that the show could be fake. Shocked.

So... have we wrapped our heads around that all? Because that was a lot.

We'll find out what happened for sure after the finale airs on Thursday night.