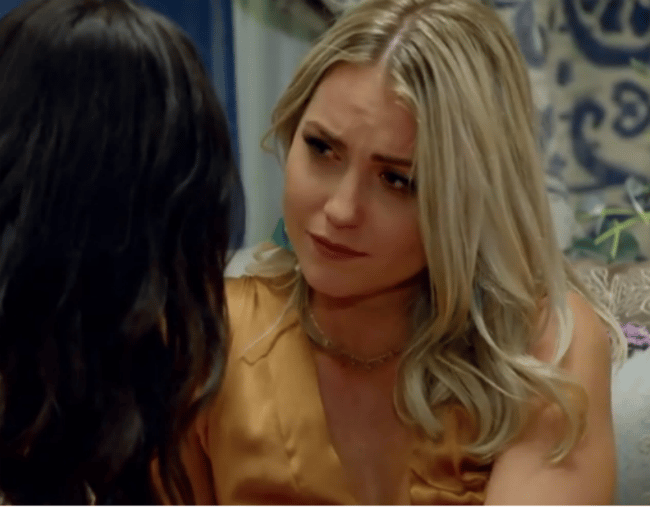 Why does this have to happen every single time.

Ignore the last two questions. They're... personal. It's the first point I want to discuss.

WHY DO WE HAVE TO RUIN EVERY SINGLE SEASON OF THE BACHELOR.

Just over one week from The Bachelor finale, the Daily Mail has published paparazzi photos confirming who this season's final two contestants are.

The two women were spotted at Brisbane airport in late May or early June on their way back from New Caledonia, where the finale was filmed.

WHO THE HELL EMPLOYED SOMEONE TO WAIT AT BRISBANE AIRPORT SO THEY COULD SPOIL A TV SHOW? WHAT KIND OF SICK PERSON DOES THAT?

Since the very beginning of this season, we've put up with countless rumours and 'clues' about how the series ends. By this point, we're almost certain Honey Badger is no longer in a relationship with the woman he chooses, and we're also almost certain who that woman is.

One detail we didn't know was who made it to the top two.

NOW WE HAVE PHOTOGRAPHIC PROOF.

It's a huge spoiler. There's a fan favourite who isn't in there, which gives credence to other rumours circulating about how the end of the season unfolds.

Listen to the latest episode of Bach Chat, where we debrief on all The Bachelor goss.


This happens every bloody season. The day of last year's The Bachelorette finale, the Daily Mail photographed Sophie Monk and Stu Laundy entering the same hotel room for their couple photoshoot, and in the lead up to the last season of The Bachelor, the same publication put together that Laura Byrne and Matty J had spent a secret weekend together, publishing photos of their departure, Uber journeys, arrival back home, etc.

But it's not the Daily Mail I'm annoyed at anymore.

You had one job: To keep the result of this silly show a surprise for literally like 6-8 weeks. Instead, with rumours circling about Honey Badger still being single by the time the show ends, the 30-year-old has done nothing to appease them. No public statements. No ambiguous comments about being really happy and in love. Just suspicious Instagram activity and footage of him standing in close proximity to a woman who is definitely not a Bachelor contestant.

With one week to go, the show is almost completely... spoiled. We know who makes it to the top two, and, allegedly, what happens once Cummins chooses a winner.

Add to that the fact the former professional Australian rugby player won't even be in the country when the finale airs - therefore dodging the media circuit - and the result seems clear. Former Bachelor Blake Garvey, who had broken up with winner Sam Frost before the show went to air, also cancelled his finale interviews.

This is why we can't have nice things.

Because we start stalking people and we spoil them.

Can't we just chill until next Thursday, when we've all seen the very objective story Channel Ten wants us to see?

Lord knows I don't have the self control to not click on spoilers, so pls, no more.

It's ruining my very sacred experience of The Bachelor.

If you want to know who the final two women are (which you definitely don't), you can click here (but you shouldn't).