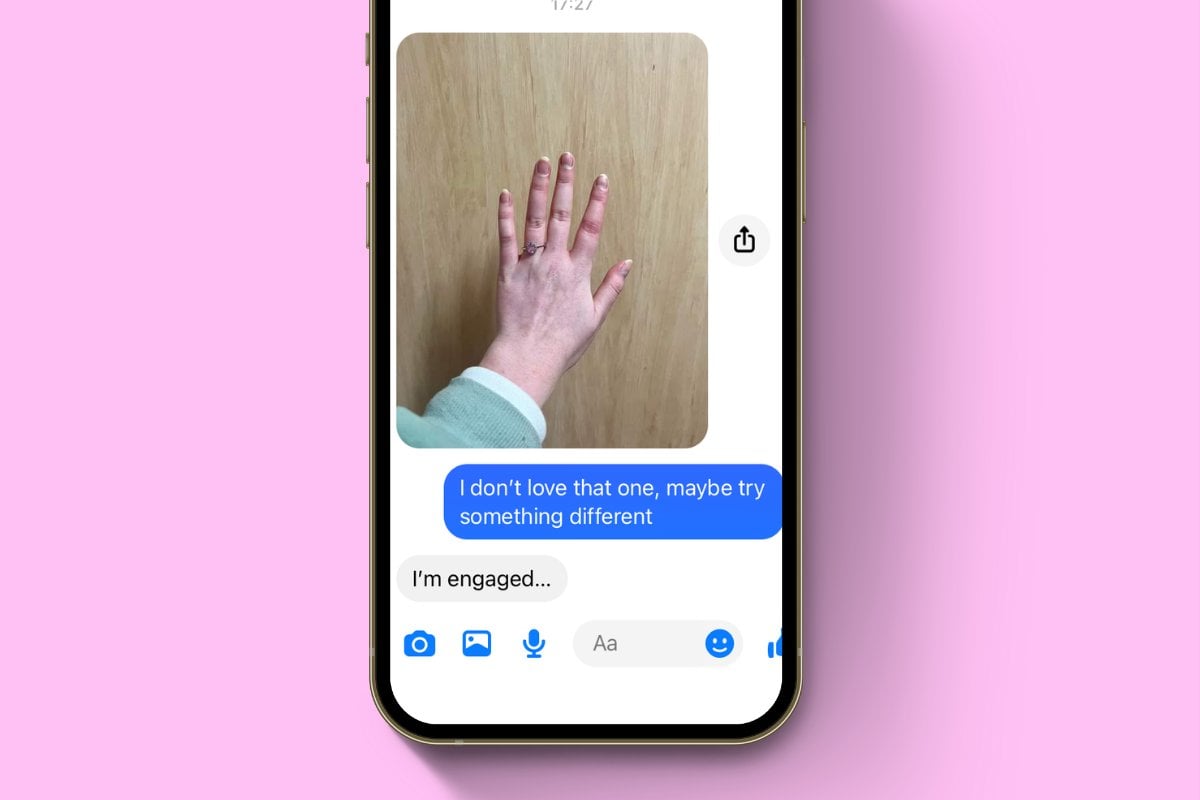 We've all been there. The moment you send a text message to someone – either in the heat of the moment or accidentally – and milliseconds later you realise that message shouldn't have been sent, and a bin fire of consequences could be coming your way.

Perhaps you've sent a regretable text to your boss that wasn't work safe. Or maybe sent a text to one friend that was definitely meant to be sent to the other friend. Many of us have even sent a spicy or confrontational message to a romantic partner, only to realise it probably wasn't the best idea...

Just this week, Apple announced that its new iOS 16 update will include a feature many of us are desperate to get our hands on – the ability to edit and delete sent messages.

Apple's 'Messages' app will allow users to edit or unsend a message 15 minutes after it was first sent. And once/if deleted, users can recover the message for up to 30 days.

And whoever made that decision at Apple, thank you.

To celebrate the wonderful news in true rogue fashion, we asked 13 women to share with us the one text message they really regret sending.

"Sent to a friend who hadn't responded in a group chat for a couple of days. She eventually responded and turns out her father-in-law had died… I no longer send 'you dead?' messages."

'I really think we should try to avoid her. I don't want to be her friend anymore.'

"Instead of sending the message to our mutual friend about her, I sent it to her – and she was so, so hurt. It was in high school, but I think about it often. MASSIVE REGRET."

"I sent an angry face to someone during a meeting as a bit of a joke. I didn't realise they didn't have my number saved, so now I think they feel like someone somewhere hates them and I feel bad for it, but don't want to make things uncomfortable and bring it up again."

'F**k haha can you buy pads at the supermarket.'

"While I was in high school, my friends did some stupid techy s**t to my laptop that essentially meant whenever I typed out the word 'please' it was replaced by 'f**k haha'. Very junior. Anyway, I was sending a text via Messenger to my dad asking him: 'please can you buy pads at the supermarket.' It was replaced with 'f*ck haha can you buy pads at the supermarket'. My dad is really conservative, so the fact both the F word and pads were used in the same sentence probably gave him serious heart palpitations. My friends found it funny, although I forced them to stop messing with my laptop keyboard after that encounter..."

'I feel like we are in different places and we no longer connect. I feel like we have had issues that we have been unable to move past. It's best to protect my own energy and not force the friendship that we once had. Wish you nothing but the best for the future.'

"This was a text message I sent in regards to breaking up with my best friend after a rocky patch. She was one of my best friends but over time it felt like we were very 'one way'. She did a few things that hurt me like not having me as her bridesmaid and not speaking to me about it, not making the effort to see my new baby, her partner ruining my daughter's christening... etc. We tried to talk about things and she never took accountability and I felt like instead of letting this draining hurtful friendship drag on, it was best to end it. However, the text and the way the friendship ended impacted my relationship with my entire friendship group. Upon reflection, maybe such an infinite end wasn't needed. It felt right at the time though."

Listen to The Undone: How to fight with your friends. Post continues after audio.

"My boyfriend told me he was coming over soon, and I was excited to see him... So excited in fact, that I accidentally sent this message to my male boss instead. I nearly died when I realised! Needless to say, I had some explaining to do."

'It's amazing what loving family members do for each other. Maybe you should take a note out of your wife's book.'

"I sent this message to my dad. My stepmother – dad's third wife – had gone to visit an ill relative in hospital, which involved a five-hour plane trip. I was bitter and angry that my stepmother had made that amazing effort and yet my dad hadn't done the same for the ill relative, nor has he made the effort to come and visit me in over two years. COVID understandable, but he's had so many opportunities to see me, he just can't be f**ked. And so in a moment of hurt, I sent that message. And I knew it would blow up – and in hindsight, I do regret it. I recoiled as soon as I sent it. I should have taken a breath before sending, it would have created less damage."

'She's having sex way too loudly. I want to cut my ears off.'

'Lorna needs to get her ass into gear.'

"Lorna was my work colleague who needed to pick up the slack at work. I, of course, did not mean to send that message to Lorna. But Karma is a b*tch because I accidentally did, instead of sending it to my other work colleague called Lisa. I think I must have seen the 'L' while typing out the message sender and just been careless about what I clicked. Big mistake. It completely ruined our relationship at work."

"Yes, I was that person who decided to break up with their partner over text. At the time, I was in my early 20s and figured it was okay to end a one-year relationship that way – it wasn't. He replied by calling me, I didn't pick up, and we haven't really spoken much since."

"I sent it to my high school best friend. We had been mates for about eight years and by the last few months, I was incredibly sick of her. When we left high school, we drifted apart and in a bizarre, sobering moment I messaged her at four in the morning some long-winded text about how she didn't have to feel 'trapped' by me any longer and that she was now 'free' to have other best friends. It was emotional and brave, and completely unnecessary. Her response was just one sentence, which said 'we already decided we would not be as close since we live pretty far and go to different unis.. thanks for the heads up though… again.' Makes me giggle when I look back now, but her response used to make me feel so embarrassed. We caught up for lunch a year later and we are on good terms!"

'I don't love that one, maybe try something different.'

"One of the girls in my group chat sent through an image of her hand with an engagement ring on it. I figured she was trying some on and looking to get our opinion, as she had done that once previously. So I sent her a message saying I wasn't keen on it. BUT she didn't want my opinion obviously, she had just become engaged to her partner. I died internally as soon as I realised. There's no coming back from that."