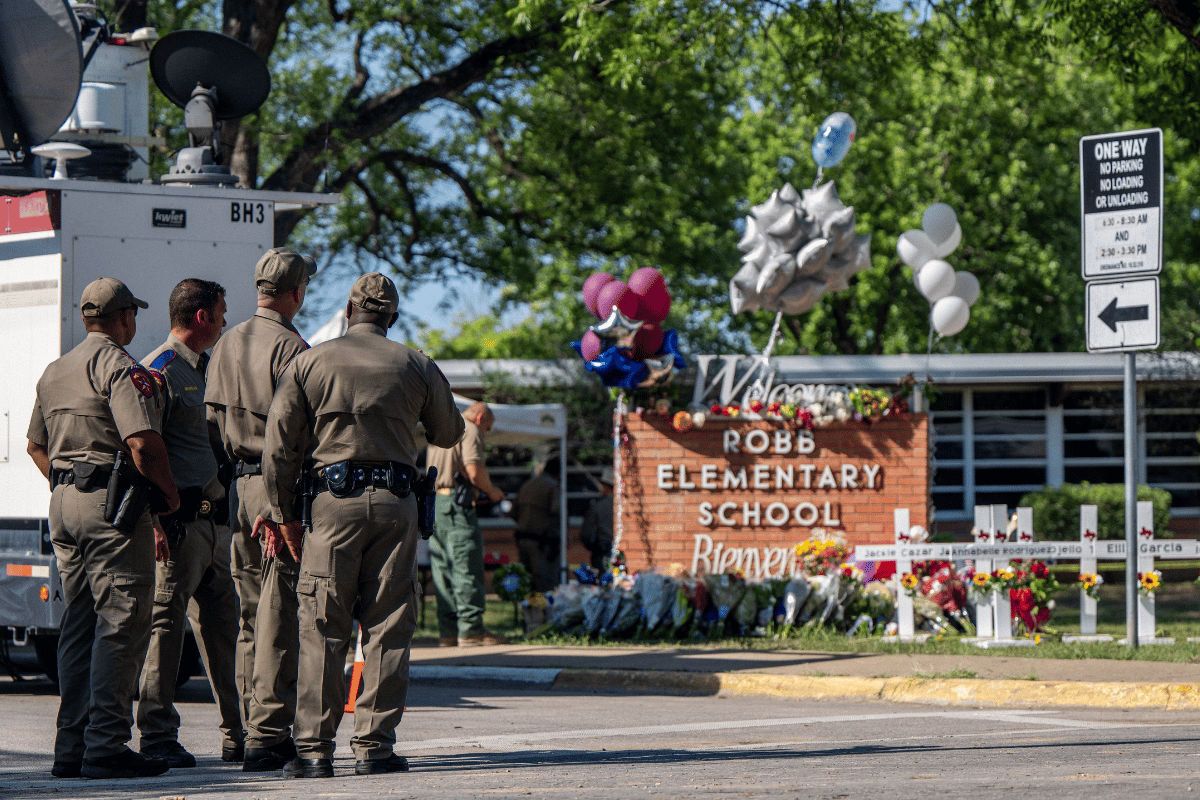 This post deals with violence and rape and death threats that might be triggering for some readers.

Last week, 19 children and two teachers were killed in a shooting at Robb Elementary School in Uvalde, Texas.

The gunman abandoned his vehicle and entered the school through a back door around 11.30am (local time) last Tuesday carrying an AR-15 assault-style rifle and wearing tactical gear. He barricaded himself inside a single classroom and "began shooting anyone that was in his way", authorities say. Law enforcement officers eventually broke into the classroom and killed the gunman.

But details have begun to emerge about the amount of time it took police to neutralise the suspect and questions are being asked about the police response.

The US government has just announced a federal investigation into the police response to the mass shooting to find out what exactly occurred and what should have been done. Here's everything we know.

Police waited over an hour to enter the classroom.

The gunman, 18-year-old Salvador Ramos, entered the school via a back door around 11.30am. Police believe he entered through a door that was meant to be locked but had been propped open.

Updated timelines from police suggest that approximately 78 minutes passed from when the gunman entered the school to when officers breached the classroom and went inside.

19 children and two teachers were murdered, and at least 17 others were wounded, with the victims all inside one classroom.

Armed law enforcement officers waited outside the classroom door in the hallway and outside the school for about an hour while the killing continued. It is believed they were waiting for a specialist federal Swat team, who eventually breached the classroom and shot Ramos dead. At 12:58 pm, law enforcement radio chatter said Ramos had been killed and the siege was over.

The Texas Department of Public Safety has since noted that "of course it was the wrong decision" for armed police to wait for an extended period outside the classroom without storming in.

Videos have since circulated of desperate parents shouting at police to go into the school, with some trying to approach the building themselves before being restrained by officers.

"It's already been an hour, and they still can't get all the kids out," one of the parents said.

"Why let the children die? There's shooting in there," said another.

"Let's just rush in because the cops aren't doing anything like they are supposed to," said Javier Cazares, whose fourth-grade daughter was killed in the attack. Cazares said he raced to the school when he heard about the shooting, arriving while police were still gathered outside.

"More could have been done. They were unprepared," he later said.

Juan Carranza, who lives beside the school, told The Associated Press he witnessed women shouting at officers: "Go in there! Go in there!"

Witnesses also saw parents being pinned down and held at bay with a taser in hand, after the parents tried to break the police barrier and go into the school.

“Go in there!” New video- bystanders and anguished parents outside Robb Elementary in Uvalde Texas plead with heavily armed officers to enter the school while the shooting was taking place. Instead they do crowd control while the shooter was active inside for nearly an hour. pic.twitter.com/rKbKSfk2D7

Video: Texas cops pinned a parent to the ground and pulled out a taser to stop other parents from attempting to reach their children at the Uvalde school shooting. https://t.co/HcbJrskxTW

Children in the classroom with the gunman repeatedly called 911.

At 12:03 pm, emergency responders received their first 911 call in relation to the Uvalde mass shooting. It was from a young girl who was in the classroom where the gunman was.

"She identified herself and whispered, 'He's in room 112'," the director of the Texas Department of Public Safety said at a press conference.

And then at 12:43 pm, the original young girl calls again. She says: "Please send the police now."

It wasn't until 12:50 pm - almost an hour since the first 911 call - that police enter the classroom and shot dead Ramos.

Officials admit not storming the classroom sooner was the "wrong decision".

Texas Department of Public Safety Director Steve McCraw said: "From the benefit of hindsight where I'm sitting now, of course it was not the right decision. It was the wrong decision. There's no excuse for that."

With this all in mind, The US Department of Justice said it will conduct a critical incident review of the law enforcement action.

Texas state senator Roland Gutierrez, a Democrat who represents Uvalde, said that errors in the response to the school shooting may have contributed to more deaths.

Gutierrez said he had spoken to the mother of one girl who died of a single bullet wound. Gutierrez was told by the mother that the first responder said their child likely bled out. And in that span of 30 or 40 minutes extra, that little girl might have lived.

"So many things went wrong, here," he said to CNN. "At the end of the day, everybody failed, we failed these children."

The warning signs associated with the gunman weren't examined.

State police have said Ramos had no criminal record, no history of mental illness treatment and no obvious signs he was a danger. But some of those in his inner and outer circle saw "increasing signs of isolation, outbursts and aggression".

And it was Ramos' social media that is now seen as the biggest red flag.

"He always seemed to take his anger out on the most innocent person in the room," said 17-year-old Crystal Foutz, who attended school with Ramos and worked with him at a fast-food chain. "He would get angry at people thinking he wasn't okay. He was just always super odd."

On his social media, photos were discovered on him holding rifles and ammunition, as well as hints of his desire to hurt and kill.

Ramos had sent a 15-year-old girl in Germany a series of messages via various platforms like FaceTime, Yubo and Plato - a gaming app. They had been speaking for a few weeks and she said she began to feel uncomfortable based on some of his messages.

The Texas shooting suspect had fought with classmates and sent messages on social media hinting at a desire to hurt and kill.

He had no criminal record or known mental illness suggesting he was capable mass murder, but there were danger signs. https://t.co/iDS7wjCRAF

Before the attack, Ramos told the teenage girl he had bought bullets, adding that they would expand once they entered a body. When she asked what he was going to do with them, he said she should "just wait for it".

He then sent another message where he claimed he "threw dead cats at people's houses".

CNN has reported that three Yubo users had even reported Ramos' account for inappropriate language and his threats.

The users all said they reported Ramos' account to Yubo, but Ramos was allowed to keep his account. During one livestream, 19-year-old Californian Amanda Robbins said Ramos verbally threatened to break down her door and rape and murder her after she rebuffed his sexual advances. She said she witnessed Ramos threaten other girls with similar "acts of sexual assault and violence".

She told CNN that she only ever interacted with Ramos online, and that she had reported him to Yubo several times and blocked his account, but continued seeing him in livestreams making lewd comments.

Hannah, an 18-year-old Yubo user from Canada, also said she reported Ramos to Yubo in early April after he threatened to "shoot up her school and rape and kill her and her mother" during one livestream session. Hannah said Ramos' behavior turned increasingly brazen in the last week. In one livestream, she said, Ramos briefly turned his webcam to show a gun on his bed.

One week after that livestream, Ramos murdered 21 people.

The investigation into the police response continues.

J
jennifercw a month ago

Reply
Upvote
Either an AR15 is a military-style weapon so dangerous that a squad of armed police are afraid to take it on, OR it's a hobby gun suitable for sale to teenagers with no background check or waiting period. It can't be both. So which is it?