Priya watched as her fiancé was burned alive, alongside five other men, at the hands of the Sri Lankan government.

It was an atrocity that was commonplace. He was killed because he belonged to the Tamil ethnic group, native to Sri Lanka, but persecuted by the Sri Lankan Military.

It’s estimated that 40,000 Tamils have been killed. But the number could be as high as 70,000. It’s hard to know, given the government at the time wasn’t really counting.

During the Sri Lankan civil war, and according to multiple reports, even since, Tamils have been subject to widespread rape, torture, bombings and murder.

It was 2012 when Priya, having lost the man she was meant to marry, decided to seek asylum in Australia. She wouldn’t have known much. Just that in Australia, your country does not kill you because of the blood that runs through your body.

Watch: Priya and Nades Murugappan speak about returning to Biloela on Australian Story. Post continues below.

One year later, a man named Nadesalingam, or Nades for short, sought refuge for the same reason. A Tamil, Nades is said to still bare scars from the shrapnel that exploded onto him from a government bomb.

In Australia, Priya and Nades met. They married. Nades got a job in the Biloela meatworks. They had two children. It was surely a life previously unimaginable to a woman who watched a man she loved burn.

For more than three years, the couple lived in Biloela, a small community in Central Queensland.

Then, in March 2018, Priya’s bridging visa expired. She says she was in communication with a caseworker from the Department of Home Affairs, according to The Guardian. Priya was expecting a new visa to arrive.

It never came, though.

Instead, while Nades was getting ready for work and Priya was preparing a bottle for her then seven-month-old baby, their home was stormed by police.

Their sleeping children were taken from their beds, while Priya and Nades were given just 10 minutes to collect whatever they needed. They would never be coming back.

Simone Cameron, who used to live in Bioela with the family, told the ABC they were, “lovely, salt-of-the-earth people… They’ve had such a traumatic life living through a war and they just thought a town like Biloela was the answer to their dreams.”

The family of four, two of whom were born in Australia, were sent to a detention centre in Melbourne.

For months, they were held in small rooms, unable to go outside or see other people.

According to The Guardian, medical reports showed that the two girls “suffered severe vitamin deficiencies”, as well as a number of other medical issues. Tharnicaa experienced infections in her teeth, which eventually turned them black. There were delays in accessing treatment and medication.

Doctors said that nothing about the detention facilities in Melbourne are suitable for children.

Then, in August 2019, the family was removed from detention and placed on a plane departing from Melbourne Airport.

Cameron told the ABC, “Priya reports that some of the guards have been rough and aggressive with her, that she can’t feel one of her shoulders… She asked for the chance to go and change her clothes and they refused her that.”

At 3am on Friday August 30, they arrived in Darwin, where they were held in a hotel. For hours, no one know where the family were.

Listen to this episode of The Quicky, where host Claire Murphy discusses the family's case. Post continues after podcast.

When contact was reestablished, advocates learned that the family were being taken to Christmas Island late on Friday night.

The family’s lawyer, Carina Ford, told the ABC, “I mean there’s a reason why Christmas Island was closed in the first place, and it’s remote… the conditions have never been appropriate and it’s obviously just the fact that this has happened overnight with two young children is of course traumatic.”

Home Affairs Minister Peter Dutton responded by telling Nine’s Today program, "I would like the family to accept that they are not refugees, they’re not owed protection by our country."

“They came here by boat and we’ve been very clear that they wouldn’t stay.”

Australian Prime Minister Scott Morrison announced at the time that he could not “in good conscience” allow the family of four to stay in Australia, and to make a last minute ministerial intervention would send the wrong message to other asylum seekers.

“It’s not about the public mood, it’s about what is the right decision for Australia’s national interest to ensure that the integrity of our border protection regime is maintained,” Morrison told reporters in Sydney, before adding, “That’s not how you run strong borders.”

Nades sent a simple message in response to Australian politicians: “We want to go home. We want to go back to Biloela. We want a safe life for our children and for us.

“I believe Peter Dutton has a big heart. I believe, as a father, he can understand my feelings.”

In 2019, it was reported that Priya was suffering from post-traumatic stress disorder following her last visit to Christmas Island.

Then, in June this year, four-year-old Tharnicaa was evacuated to a Perth hospital.

She was diagnosed with untreated pneumonia, which her family friends believe caused the blood infection.

"I am feeling very scared and worried for my little girl," Priya, who accompanied her daughter to the Perth hospital, said in a media statement at the time.

"She has been sick for many days, it took a long time for her to get to the hospital. She is already asking for her papa, it is going to be very hard being away from her Dad and sister. It is very hard for our family to be separated when our daughter is sick." 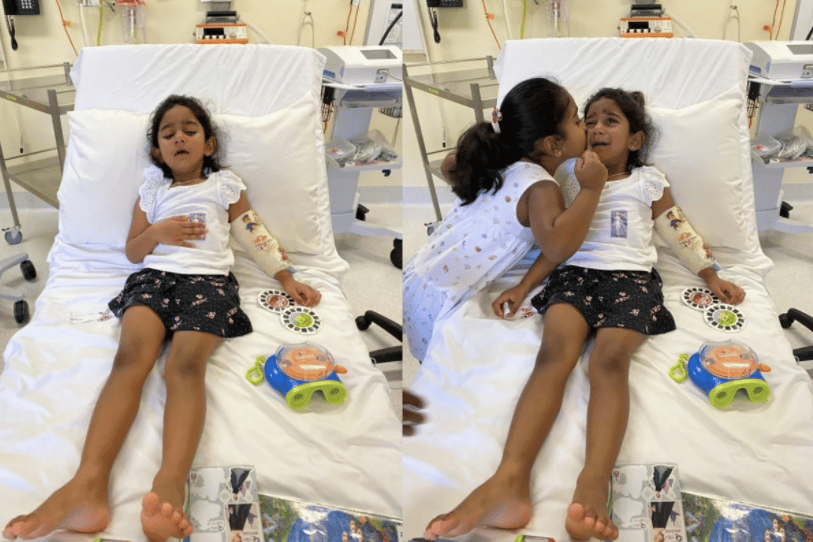 Angela Fredericks, family friend and spokesperson for the Home to Biloela group, also commented on the situation, saying: “If her loving parents were able to access medical services for their children the moment they needed it - as they would in the Australian community - we would not see these shocking delays. That’s all Nades and Priya want to do for their girls - to care for and protect them.”

Karen Andrews, the Home Affairs Minister who has the power to intervene at any moment, told reporters at the time that they were exploring resettlement options for the family.

Later that month, Immigration Minister Alex Hawke granted the couple and their six-year-old daughter, Kopika, three month bridging visas so they could live in community detention in Perth, while Tharnicaa recovers.

The visas were due to expire on Wednesday, meaning Nades, Priya and their two children could have been sent back to immigration detention or community detention, or removed from Australia altogether.

However, Hawke told a court last week that he intended to renew their bridging visas for another three months while the family's legal battle continues.

According to the ABC, the minister intends to issue new bridging visas to Priya, Nades and Kopika on Thursday, when their current visas are set to expire.

The announcement was made during the Federal Circuit Court last Thursday, where the family's lawyers were challenging a decision by the minister which prevented the three family members from applying for further bridging visas.

Family friend Simone Cameron said she welcomed the decision, but it meant "the family’s situation is largely unchanged".

"They are still essentially trapped in Perth, in community detention along with little Tharni," she said in a statement.

The announcement comes after the High Court refused a special leave request last month, which prevented the youngest, Tharnicaa, from seeking a chance to apply for a protection visa.

"At the very best, they will be arrested when they arrive. They will be investigated and almost certainly have to go into re-education camps for a period of two years," he said.

"Their children will be taken away and put into orphanages because they can’t go into the education camps and they will essentially disappear into the system."

"At worst, what we are likely to see is that the parents will not just face arrest and rejection, but likely torture and potentially disappearance."

"Their case is a very high-profile one, and they will be regarded very poorly by Sri Lanka’s authorities, so we’ll lose both the parents and the children. The children who were born in Australia." 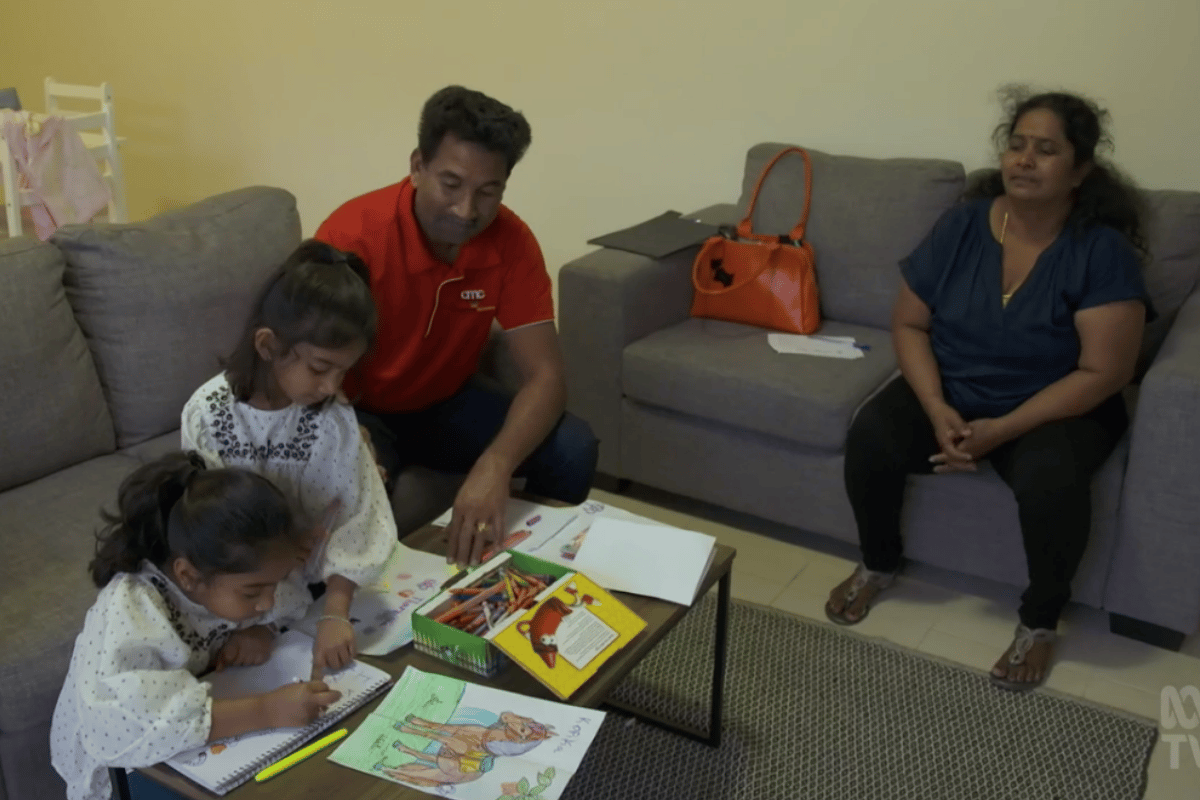 As the family wait to be granted their new three-month bridging visas, Priya says she hopes herself, Nades and their daughters will be able to return home to Biloela one day.

"They [Australians] have accommodated me and my children in their hearts. I thank them for that as long as I live," Priya said on Australian Story.

"I await with hope they will continue their support and send us to Biloela." 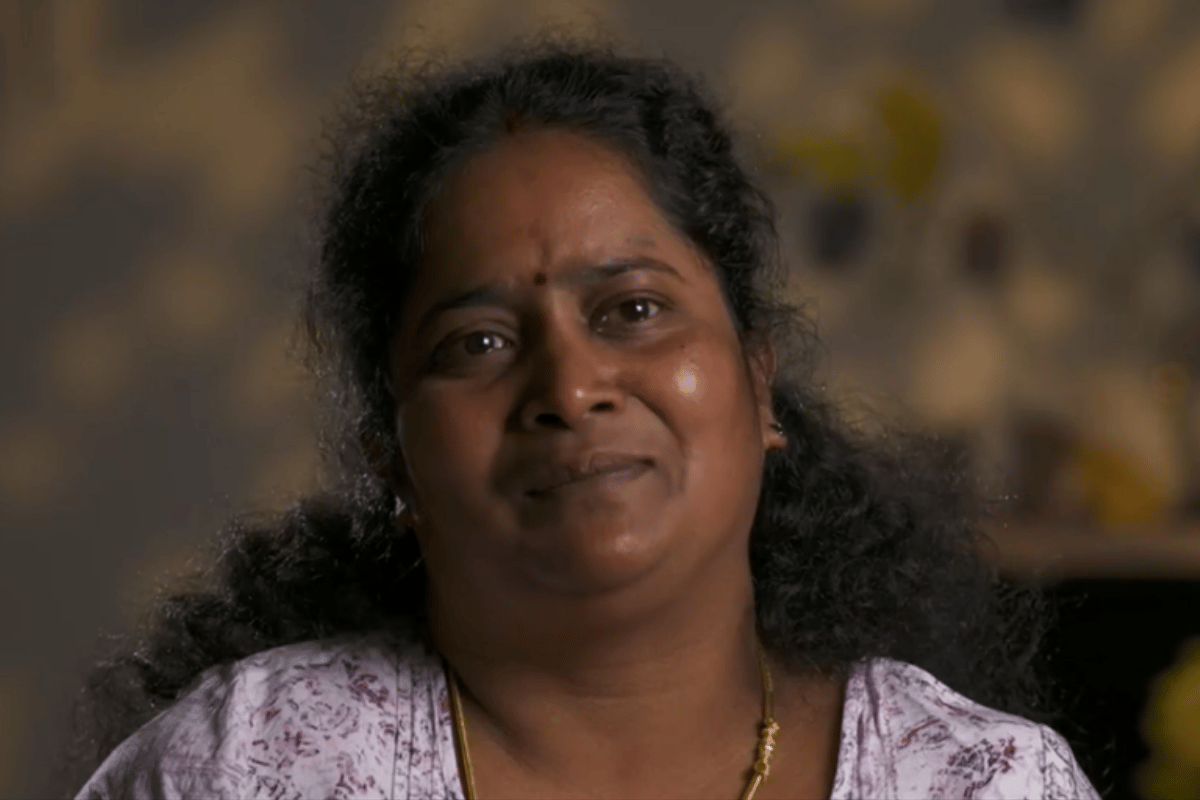 This is a family who fled from persecution, believing they would find refuge in one of the wealthiest and safest countries on earth.

Priya and Nades escaped trauma only to be met with a new brand of trauma. Their daughter Tharnicaa knows nothing else.

The treatment of this family is Australia's national shame.

How do we know if what this family is saying is true. The claims about the fiance are unsubstantiated and the ABC had reported that the family had lied on their visa application.

Reply
Upvote
@Corrine Lawson Your lack of comoassion is, apalling
M
mamamia-user-391653937 a year ago

Reply
Upvote
2 upvotes
@Corrine Lawson What a disgusting comment there has been plenty of information re what Tamils are treated like in their home country or do you not read news?
M
mamamia-user-391653937 8 months ago

Reply
Upvote
@Corrine Lawson You must not read world news, it is appalling conditions for Tamils in Sri Lanka. Also Peter Dutton was allowing cheap labor in the form of nannies in from overseas at the time. One rule for him and the other for this poor family.
B
Beebs 3 years ago

The Dept of Home Affairs has refused visas to peope who feared for their lives in the past then sent them back, where they were killed just as they feared they would be. This woman has witnessed and been affected by shocking human rights abuses at the hands of her Government. Where is the compassion?