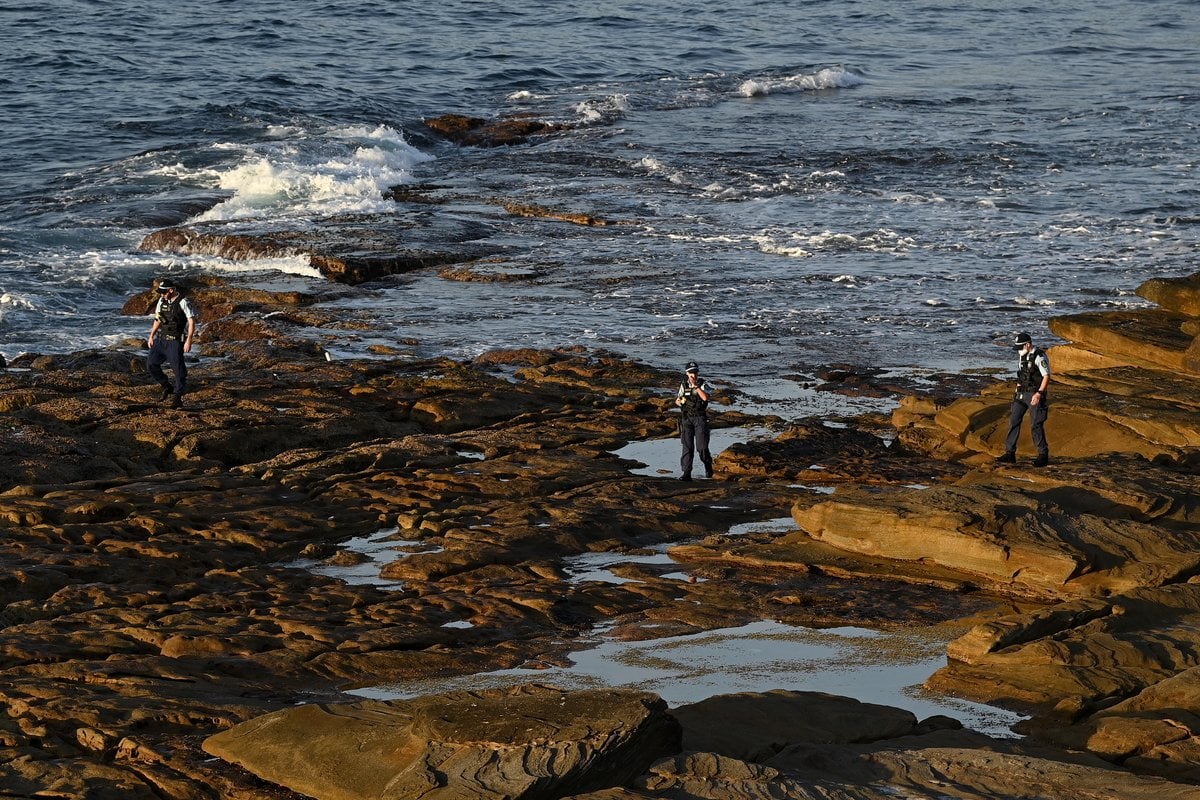 Today, a snuff video is playing on every device in the land, dressed up as news.

A shark attack at a Sydney beach - an event so rare, so random that it hasn’t happened for 60 years - cost a man his life yesterday afternoon.

A phone was raised from the nearby headland. Of course it was. This is a city beach, a blue-grey bay, just metres from homes and backyards, playgrounds and parks. And that phone captured one of the most horrific things us humans can imagine - a man being killed by an enormous predator. In real time.

We film things these days. It’s what we do. We live our lives through the oblong view of our black mirrors and it’s just how things are, how we process, how we document, how we mark our presence at a notable event.

The footage from that phone - let’s be clear, footage of a living, breathing person’s final horrifying moments, someone’s son, someone’s friend - was always going to find its way online. Of course it was.

It was always going to be passed around and shared and whispered about. Seeing things we can barely imagine is salve for our very human curiosity. What does it look like, the very worst thing happening?

But that video isn’t being traded surreptitiously. It isn’t being whispered about. Less than four hours after the man (unidentified at the time of writing, but no less human for it) lost his life, that video was the “splash” of several major news sites, within hours.

“Splash” means front and centre, the main event, the thing that people see first, click on first, the hero of the hour.

And this one was accompanied by trite warnings, Graphic Content; Some (only some?) Viewers May Find This Video Disturbing, but it’s blatant, base appeal was unquestioned. Let's face it, the clicks will be great, mate.

There is no doubt that this event is news. Sydney’s beaches haven’t had a fatal shark attack since 1963.

A great white of that size and scale and power is not something that millions of Sydneysiders contemplate encountering when they are swimming on a Summer afternoon at a city beach.

It is worthy of headlines, of coverage, of question, of analysis. Of the inevitable follow-up debates about nets and culls and shark numbers and closed beaches. And of remembrance of the victim’s life.

But the video? It’s a snuff film. Nothing more.

A snuff video is a very specific kind of horror movie that depicts a human death, an actual murder. To say that they, and the far more common fake versions, dwell in a dark corner of the Internet is an understatement. You can find anything online, after all, if you rifle through enough trash to find it.

No-one had to look very hard to witness a life being extinguished yesterday. Or this morning. Or as I type this.

Not children, not teens, not you. Not the family of the man who, in all likelihood, was only wondering why their loved one hadn’t returned from the beach by the time that film was being watched by thousands. Not the many of us who have swam in that particular stretch of ocean, and the beaches surrounding it, daily, weekly, monthly, all their lives.

If you have watched that video - and so very many have - there is no shame on you. It is human to want to witness something extraordinary. There’s a dark thrill in seeing one of our deepest fears - and shark attacks do occupy a particularly embedded primal space in our psyche - actualised.

But there is some shame on the outlets that are playing that death as looped entertainment today. They are enabling our darkest impulses. They are feeding the beast. And they are altering lives.

Until last year, I lived a skip away from Sydney’s eastern beaches.

My children have grown up with the ocean as their literal playground. How fortunate, how idyllic, what extraordinary privilege, to be so close to such a natural wonder as the Pacific Ocean.

We have all swum at Little Bay and Malabar many, many times. They’re not the flashy, famous beaches, they’re beloved local treasures. And yesterday, they became infamous for being the site of an unimaginable horror, now screening around the world.

What does that video do to the psyche of everyone whose relationship with the ocean is one of release, joy, play, and, yes, self-care?

Salt-water therapy has saved many during the last two years of lockdowns and lock-ins. The closing of beaches during Sydney’s first wave of COVID restrictions, the placing of yellow tape between us and the ocean, was seen as one of their cruellest blows.

And of course salt-water lovers know they share their treasure with predators.

The knowledge that there are sharks in that water is a low-level hum for all of us. How loud you allow that hum to become depends on the level of your passion.

For the point-to-point swimmers, they have found a way to silence it, most days, for the meditative pleasure of carving through the cool water.

For the surfers, they have allowed their love of the waves to be louder than their fear.

For the Nippers, the splashers and the bodysurfers - like my children, like me - they turn it down for those precious moments they get to submerge their heads in the cold, clear ocean and feel, just temporarily, closer to something pure.

I am not with my fish of a daughter this morning.

She is on her way to school as I write this, her newly-bestowed smart phone in her hand. If I was a Year Seven kid, keen to fit in and impress in my first weeks of High School, wouldn’t I watch the video that all of my mates were talking about? The one my parents told me not to? Of course I would. How bad can it be, really, if it’s so easy to find?

Well, bad enough to change your relationship with the ocean forever.

Bad enough to discount the humanity of a man who, this time yesterday, thought he was having the most ordinary kind of day, a late-Summer stunner, the most wonderful time for a swim.

Bad enough to know now, forever, that there are people who will hold up their phone and film the worst thing imaginable happening to you.

And share it. And pass it off as news. When really, it’s just unadulterated horror.

A
azzuri 6 months ago
Reply
Upvote
3 upvotes
Filming a person being attacked by a shark is just awful and posting it on social media is worse. Why would one do that? Think of their loved ones. Do you seriously think any good will come from this?
C
cat 6 months ago
Reply
Upvote
1 upvotes
I agree that the footage is (probably) horrific, but it's a record of a tragic event. I don't think it can really be compared to actively taking a human life for entertainment, which is the definition of a snuff film. Also, no one has ever proven that snuff films exist, they are an urban myth.
J
jessrusinko 6 months ago
Reply
Upvote
5 upvotes
@cat Having unintentionally stumbled upon the footage on tiktok I can confirm it is definitely horrific. And I understand what you're saying about it not being the same as murder, but I respectfully disagree because it's still violent, and it's still a life ending in unimaginable circumstances, regardless of whether the death was as a result of a crime or not. Like many people, I have lost people I love, and while they didn't die violently, if there were somehow footage of their last painful moments being passed around the internet as 'entertainment' disguised as news I would be broken, so I can't help but think of the family and friends of the victim who, in their most heartbreaking days, are now also faced with the knowledge that random people are now able to watch his violent death. This is not a record we need - there doesn't need to be footage of an event to make it tragic, it's tragic regardless and the only outcome of the footage being spread is more unnecessary trauma and sadness.
M
mb1111 6 months ago
Reply
Upvote
@cat we can get pedantic about whether it is technically a snuff film or something else.  Although it may not have been the filming of a murder and as a result an official snuff film, it is still footage that is of someone’s death that is being viewed by people out of curiosity or pleasure.  Footage of extremists heading people are not urban myths and may be closer to the official definition of a snuff film.
C
cat 6 months ago
Reply
Upvote
1 upvotes
@jessrusinko  Its definitely awful for the family. The difference is important though, because allowing people to watch snuff films leads to more deaths. Showing this footage is certainly in bad taste and even cruel, but its not going to lead to more shark attacks. It's a very significant difference.
C
cat 6 months ago
Reply
Upvote
1 upvotes
@mb1111 its not pedantry, it's important. People get hysterical about things like "snuff films", which does nothing but divert attention and resources from real issues. It's just not a term that needs to be used to discuss why we shouldn't share this footage.
Resources
Very Peri
Skin
News
General
Opinion
True Crime
Politics
Sport
Explainer
Entertainment
Celebrity
Reality TV
Movies
TV
Books
Rogue
Royal
Lifestyle
Beauty
Fashion
Weddings
Home
Wellness
Health
Fitness
Travel
Food
Family
Before The Bump
Pregnancy
Baby
Kids
Teens
School
Parent Opinion
Work & Money
Money
Finance
Career
Lady Startup