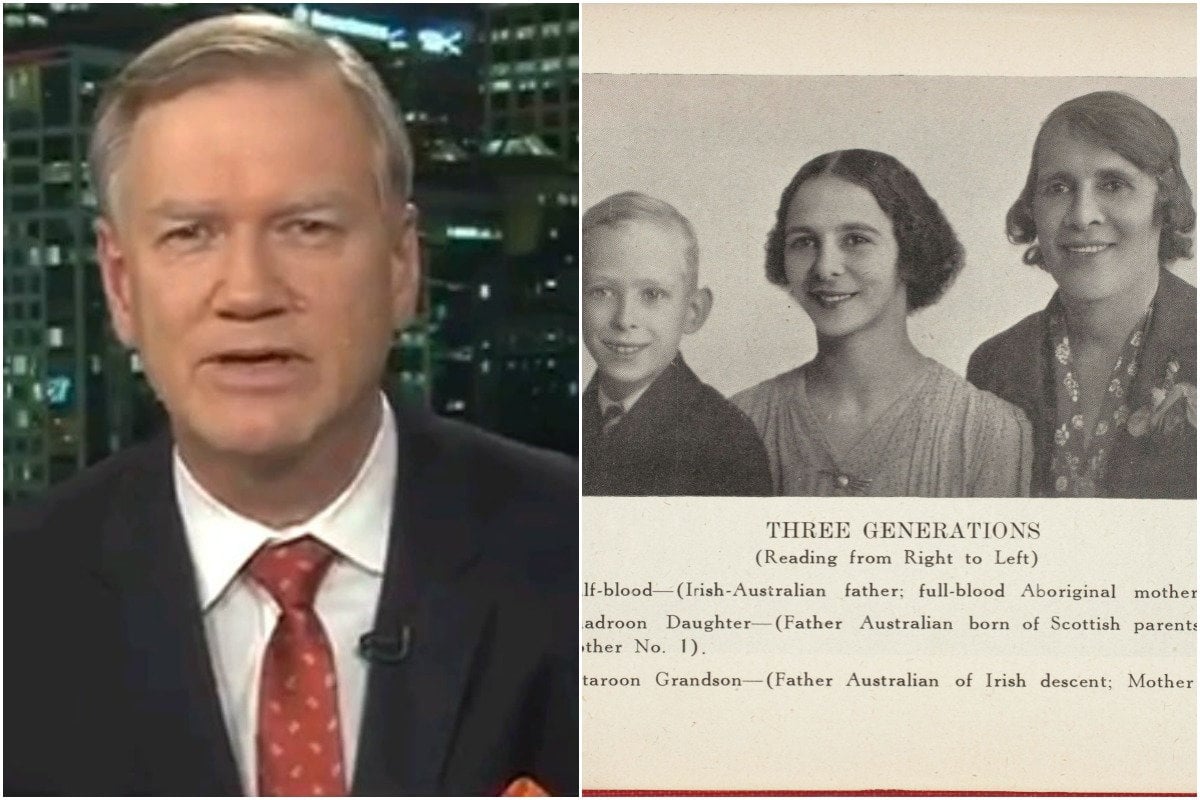 Last week, I wrote an article about Andrew Bolt.

As I was describing who he was, I included the sentence: Bolt denies there was ever a Stolen Generation (to be clear, there was).

I didn't give that sentence much thought. I just figured it was responsible to counter Bolt's opinion about the Stolen Generations with historical fact.

I received more emails in response to that sentence — or specifically the five words 'to be clear, there was' — than I have about anything I've ever written. The message was clear. There's no such thing as the Stolen Generations you lefty (bleep) why don't you (bleep, bleep) and look at the facts you ugly (bleep).

Up until this weekend, I was blissfully unaware that a debate still existed around the Stolen Generations.

We have the Bringing Them Home report. It was published in 1997, the culmination of a national inquiry into the separation of Aboriginal and Torres Strait Islander children from their families. When it was presented to Federal Parliament, it was 680 pages long. There were no shades of grey. No ambiguities. The inquiry found that "Indigenous families and communities have endured gross violations of their human rights. These violations continue to affect Indigenous people's daily lives. They were an act of genocide, aimed at wiping out Indigenous families, communities, and cultures, vital to the precious and inalienable heritage of Australia."

It's interesting that there are features of history we do not deny.

The Battle of the Somme took place between July 1 and November 18, 1916. Japan signed their formal surrender on September 2, 1945, bringing World War II to an end.

Yet when it comes to the subject of violence perpetrated upon an ethnic minority, suddenly we decide the history isn't so clear. We can have all the same evidence. The paperwork. Photographs. Eyewitness testimony. In the case of the Jewish Holocaust there are bodies and shoes and hair and maps and recorded speeches and still there are those who deny it ever happened.

What any denier has to ask themselves is: What level of evidence do I require to believe it happened? And when that level is reached, one must be open to having their mind changed.

So here is how to have a conversation with someone who believes the Stolen Generations didn't happen. Here's what they'll try to argue, and how you'll respond.

Who are we talking about when we say 'Stolen Generations'?

Before we begin, let's get on the same page.

The Stolen Generations are the Aboriginal and Torres Strait Islander children who were forcibly taken from their families and communities across Australia, as a result of government policies.

There is extensive evidence that such government policies existed. In Western Australia the Aborigines Act 1905 removed any legal guardianship of Aboriginal parents. This meant that all Aboriginal children were wards of the state, legally allowed to be 'relocated' without permission.

Dr. Cecil Cook, who was appointed the Chief Protector in 1927 said: "Everything necessary [must be done] to convert the half-caste into a white citizen".

Similar policies existed in most states across the country. In 1915, New South Wales instituted the Aborigines Protection Amending Act which gave the board the authority to remove Aboriginal children "without having to establish in court that they were neglected."

It was legal in most states to remove "at-risk" children from their parents. In those states, simply 'being Aboriginal' was often enough to legally qualify as "at-risk".

The Bring Them Home report estimates that at least 100,000 children were removed from their parents, whereas academic Robert Manne believes it was closer to 25,000. His figure is based on surveys with Indigenous people in conjunction with government records.

The Stolen Generations were removed between 1869 (signposted by the Victorian Board for the Protection of Aborigines) and 1969 (when the NSW Aboriginal Welfare Board was terminated). It is important to note, however, that Aboriginal and Torres Strait Islanders were also removed before and after this period. 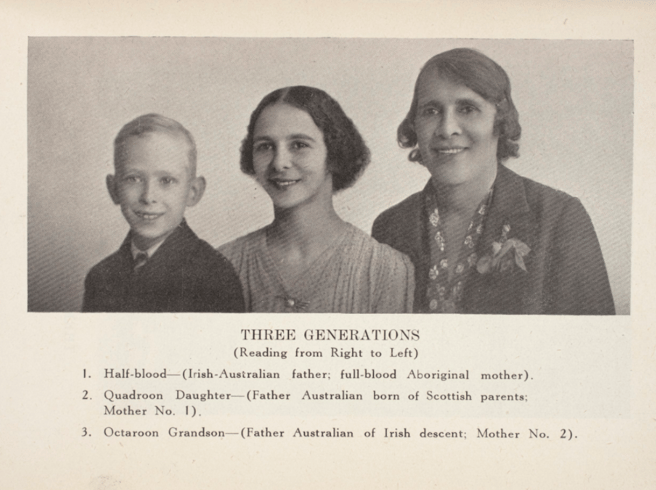 "Aboriginal people were just removed from parents who were neglectful or abusive."

Emphatically, this was not the case.

The laws at the time tell us that it was perfectly legal for Aboriginal children to be taken from their parents. There is no evidence that children who were removed were subject to abuse or were neglected. In fact, we have more evidence to the contrary.

Of the hundreds of Indigenous people who were part of the Bringing Them Home report, a vast majority said they were neither neglected nor abused.

Government reports from the time tell us that the number one reason Aboriginal girls were taken from their families was to "send her to service". While some reports cite "neglected" as the reason, it's important to note that this did not require proof in the eyes of the law. Girls were also taken for their "own welfare" or for "better living conditions" to "get her away from her community", to "protect her morality" or because she was a mother in hospital. Many reports simply did not specify a reason.

There was also a clear racial motivation for removing children, in that authorities disproportionately targeted children who were mixed-race, and thus were thought to be able to assimilate into white society more easily.

Furthermore, there were "Blanket Babies" who were stolen before their mothers even had the opportunity to see them. It's unclear how abuse or neglect could have taken place in such an instance.

The other argument of course, is that if children were removed as a result of abuse, then surely the priority would be to send children to safe homes. Instead, nearly one quarter of witnesses at the Inquiry who were fostered or adopted say they were physically abused. One in five say they were sexually abused. Indigenous children therefore were not moved away from abuse. They were moved towards it.

"Individuals might have been removed, but it wasn't genocide. No one was trying to get rid of an entire culture."

The government documents from the time tell us otherwise.

Just to be clear, the United Nations defines genocide as, "any of the following acts committed with the intent to destroy, in whole or in part, a national, ethnic, racial or religious group, as such." Beneath it are a number of articles, including "forcibly transferring children of the group to another group".

Assimilation has always been rooted in Australian colonial history, but was officially enshrined in law in 1937 when all the Commonwealth and States agreed that the process of assimilation should be adopted. Records from a conference state clearly: "This Conference believes that the destiny of the natives of Aboriginal origin (sic), but not of the full blood, lies in their ultimate absorption by the people of the Commonwealth, and it therefore recommends that all efforts be directed to that end...The policy of the Commonwealth is to do everything possible to convert the half-caste into a white citizen."

The UN also refers to "the mental element" when it comes to a proven attempt to destroy an ethnic or racial group. When Aboriginal and Torres Strait Islander children were sent to institutions or religious missions, they were often not told of their cultural ties, meaning as well as losing their families (many members of the Stolen Generations still cannot track down their parents or siblings) they lost their languages, traditions and customs. This led to a mass erasure of culture, which we know was intentional because of government policy at the time.

It was the intention of the Australian government to "breed out" Indigenous people. In 1933, a Sunday newspaper quoted Dr Cecil Evelyn Cook, the chief medical officer and "chief protector" of Aborigines in North Australia. He explained that by the "fifth and invariably by the sixth generation, all native characteristics of Australian Aborigine are eradicated. The problem of our half-castes will be quickly eliminated by the complete disappearance of the black race, and the swift submergence of their progeny in the white." He continued: "The Australian native is the most easily assimilated race on earth, physically and mentally. A blending with the Asiatic, though tending to increase virility, is not desirable. The quickest way out is to breed him white."

The intention was for there to be no more Aboriginal and Torres Strait Islander people, and this was enacted through the Stolen Generations. On every count, this period of history qualifies as genocide.

"But white children were taken too. How come they're not called the Stolen Generations?"

This is actually true.

Between 1940 and 2012, more than 250,000 white mothers lost their babies as a result of illegal adoption practices in Australia. These women were often unwed, and were drugged or tethered to their beds, while their babies were taken from them. Some were told that their babies had died. They hadn't.

In 2013, then Prime Minister Julia Gillard made a formal apology to victims of forced adoption.

While the years of the Stolen Generations and forced adoptions in Australia overlapped, they weren't the result of the same policies. To begin with, the process of forcibly removing babies from their white mothers was illegal, even at the time. Forcibly removing black babies, however, was legal.

Removing children from Indigenous parents was also about the destruction and erasure of a culture. It was state sanctioned in a way forced adoption wasn't.

That does not preclude the trauma and ongoing suffering experienced by white mothers who lost their babies. Their pain stands as its own historical reality. Just because one historical event took place, doesn't mean another didn't. They occurred roughly simultaneously, but had distinct origins. To treat these historical tragedies as part of the same event, doesn't do justice to either.

If they still haven't changed their mind...

Leave the facts with them.

In 2018, it was estimated that more than 17,000 members of the Stolen Generations were still alive. Around one in three Aboriginal and Torres Strait Island people are descendants of the Stolen Generations. To deny it happened, is to say one does not believe thousands upon thousands of accounts, government policy from the time, the Australian government more broadly (the Inquiry and then an official apology by Prime Minister in Kevin Rudd in 2008) and the vast majority of people who study history for a living.

The Stolen Generations is not a matter of opinion. And it's our job as Australians to set the record straight.

Reply
Upvote
I remember when 60 Minutes did a story on the Romanian Orphanages. I was only young at the time but I've never forgotten it.
F
flissyb 2 years ago

Reply
Upvote
1 upvotes
@flissyb Oops my apologies. Posted in the wrong area. Didn't realise I had scrolled down to a different article.
As for people not believing that the Stolen Generations happened. I've always found it very telling that they automatically believe that white children were taken due to forced adoptions (they absolutely should be believed) but as soon as it's mentioned Indigenous kids were removed it's ''no no that never happened the government would never do that''! Why is one group worth believing but not the other?
M
manalilic 2 years ago

Reply
Upvote
3 upvotes
Wow! This is such a shocking, well written, clearly researched and documented article. Thank you Jessie for sharing your wisdom and for speaking up amidst the denial and opposition to the truth. I cannot fathom the horror of the removal of these children from their families and the decimation of their culture. We can not erase the fact that it happened, but we can certainly admit that it did and at least try to make amends for the acts of our predecessors.
Again, thanks Jessie and Mamamia for educating people, even if you get criticised (understatement!) for doing so.
News
General
Opinion
True Crime
Politics
Sport
Explainer
Entertainment
Celebrity
Reality TV
Movies
TV
Books
Rogue
Royal
Lifestyle
Beauty
Fashion
Weddings
Home
Wellness
Health
Fitness
Travel
Food
Parents
Before The Bump
Pregnancy
Baby
Kids
Teens
School
Parent Opinion
Work & Money
Money
Finance
Career
Lady Startup
Relationships
Sex
Dating
Separation
Friendship
Family
Real Life
Couples