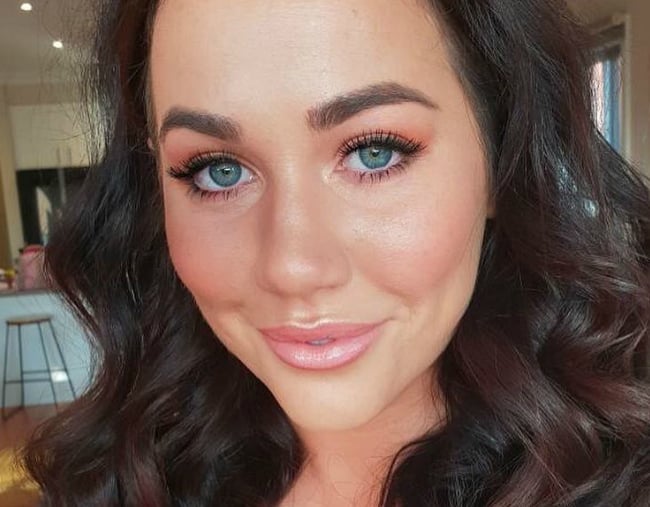 For Sophie Cachia, the decision to undergo breast reduction surgery was 10 years in the making.

Eight days after the “life-changing” operation, the 27-year-old entrepreneur has opened up about the experiences that led her to surgically reduce her “double F” cup breasts to a 12C.

In a live Q&A video posted to Instagram on Saturday, the mum-of-two described how her large breasts came to define her from a very early age.

“As long as I can remember my adult life has been surrounded by ‘Sophie with the big tits’ – that’s what I guess I’ve been known as,” she said.

“I feel like my boobs almost did define me in a way. Because everyone just knew Sophie’s got the big boobs.”

From Tassie to… BALIBALIBALIBALIBALI. Get me in my bathers again, lounge chair and a Margarita in my hand☀️???????????? Countdown is on to Mum’s 60th and a fuck load of annoying mirror selfies ????

Sophie said that at 14 or 15 years old her breasts started to rapidly grow from a C cup to a double G cup almost “overnight”. And it came with all sorts of problems for the body-conscious teen.

“My friends would laugh at me when I’d wear three bras for PE class at school.”

“I actually get really upset [thinking about this]. Going bather shopping as a teenage girl when you’ve got G cup boobs over ten years ago was a really bad time.

“And I think of those times and I think, ‘that’s why you got your breast reduction’.”

The blogger and author said she has also found clothing and bra shopping to be hard and expensive and that her big boobs impacted on her ability to comfortably play sport.

Sophie said things became so difficult that at 18, her mum took her into a doctor’s office for a consultation on breast reduction surgery.

However, although she “wanted” the surgery, Sophie wasn’t sure she was ready for it. And 10 years later, the decision was no less difficult.

The mum to Bobby and Flossy, said now was the right time for her because she was “90 per cent certain” she didn’t want to have any more children – and therefore wouldn’t risk having further breast fluctuations that come with pregnancy.

Sophie said after researching the surgery for a decade, she was “mentally prepared” for what her new boobs – which don’t have implants – would look like and how they would change her frame – but was still scared she would regret the surgery.

“One hundred per cent this was one of my fears. It’s a life-changing operation.”

“I’ve always been Sophie with the big boobs. And while there were so many negatives connotation with that, it was part of my identity.

“You can’t be guaranteed with what they’re going to look like.”

However, Sophie said she’s really happy with her smaller breasts and hoped by sharing her experience with her followers she might help others who are considering going through the same operation.

Nicola Robinson discusses her decision to have her breast implants removed on Channel Seven’s Sunday Night.