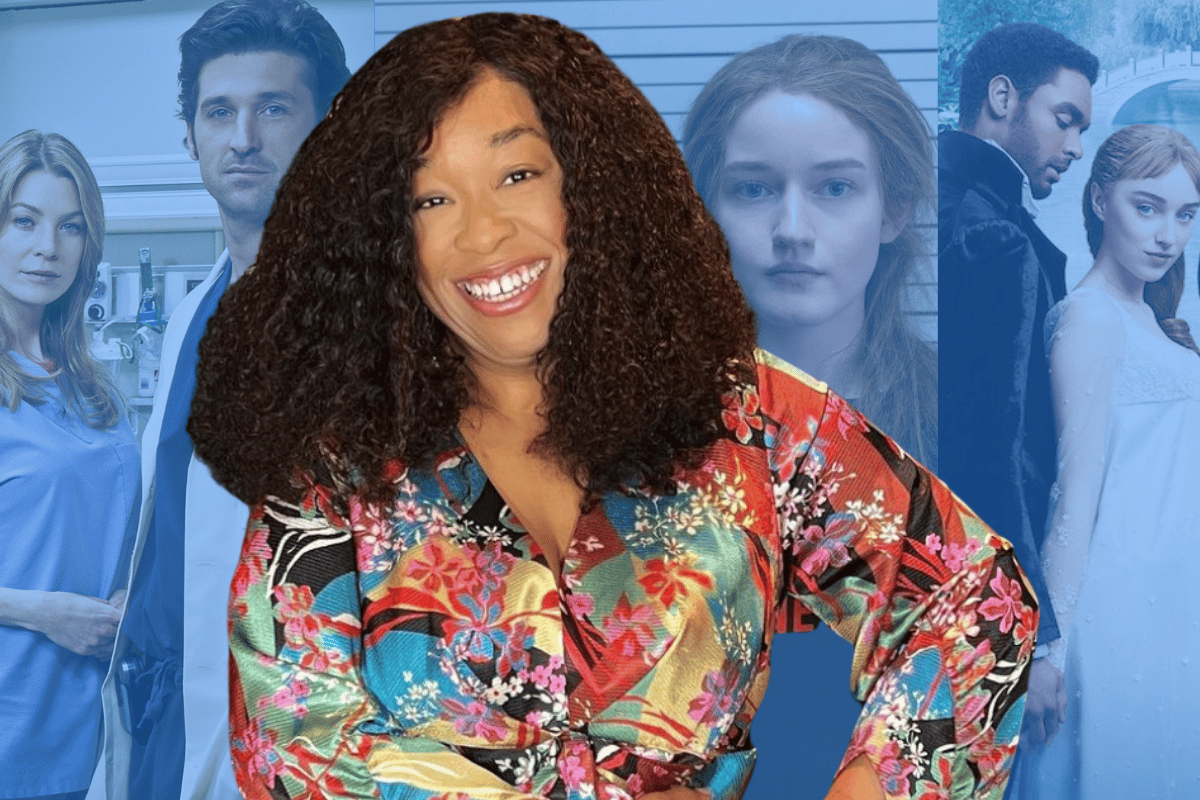 Shonda Rhimes is the highest-paid showrunner on TV, and one of the most influential figures in the industry.

She's responsible for Grey's Anatomy, Scandal, How to Get Away with Murder, Bridgerton, and  Inventing Anna, just to name a few.

Last week, Rhimes labelled herself as one of the most powerful people in television.

And there's a good reason why.

How Shonda Rhimes got her start in the television industry.

Rhimes grew up the youngest of six in Chicago with academics for parents.

With her parent's encouragement, she went to Dartmouth, an Ivy League University in the US, where she studied literature and creative writing. Rhimes also went to film school, and while studying she was hired as an intern at Denzel Washington's production company.

Rhimes was then hired to write The Princess Diaries 2: Royal Engagement, where one of her team's first decisions was to add a Black princess (Raven-Symone) to the cast.

And then one of Rhimes' first TV pilots came to be. It was set in a bustling hospital in Seattle. It was Grey's Anatomy.

Shonda Rhimes on paving the way for fellow Black producers and screenwriters.

As one of the few Black female producer/screenwriters in the industry, Rhimes has paved the way for future generations.

It's also been Rhimes' vision to ensure representation on screens is authentic and not dictated by stereotypes.

Just two powerful examples that come to mind include Olivia Pope on Scandal (played by Kerry Washington) and Annalise Keating on How to Get Away with Murder (played by Viola Davis).

And as Washington said to The Hollywood Reporter: "Shonda has changed the culture of television in that more and more people can turn on the television and see themselves. And the thing about her storytelling is that the humanity of her characters allows people to find the sameness in the differences."

Rhimes was with the ABC network for well over a decade.

But in 2017, she decided to leave the network. It sent shock waves throughout the industry. And surprisingly, the whole thing came down to a ticket to Disneyland.

As part of her ABC relationship - in which she had made millions and millions of dollars for the network - she was given an all-inclusive pass to Disneyland. So Rhimes decided to give the pass to her sister and child's nanny so the family could enjoy a day trip there. When they arrived, one of the passes didn't work. But this isn't what broke the camel's back. It was what Rhimes did next.

Listen to The Spill. In this episode, the ladies discuss Shonda Rhimes' reasoning for why she walked out on the ABC network. Post continues after audio.

To make things run a bit smoother and sort out the problem, Rhimes decided to call one of the high-ranking executives at her network, asking for help.

His alleged reply: "Don't you have enough?"

As Rhimes said in an interview with The Hollywood Reporter, she was beside herself with anger. It wasn't about the ticket. It was about the principle. And this man's reaction.

"I felt like I was dying [at ABC]. Like I'd been pushing the same ball up the same hill in the exact same way for a really long time."

So, after being courted by Netflix for quite some time prior, Rhimes saw her experience with the high-ranking ABC exec as a sign to move on. And where better to go than the world's biggest streaming giant.

Reflecting on the move five years later, Rhimes said: "There was a certain kind of show that you could produce for network television that follows a certain kind of rule. With network television, you are working for a corporation. And with Netflix, you're working with what almost feels like a start-up. And a start-up has a very 'can-do' mentality. There is a great sense of enthusiasm for telling stories and telling new kinds of stories and for being versatile."

And Rhimes' career has gone from strength to strength since.

In her interview with El País, Rhimes was asked by the publication what it felt like to be "one of the most powerful women in television?"

But as Rhimes so importantly noted, she is one of the most powerful people in television.

At an Elle's Women in Hollywood event, Rhimes was given the Luminary Award in 2018. And her acceptance speech was powerful to say the least.

"The other day I came to the conclusion that men brag and women hide. Even when they don’t deserve to brag, men brag. I'm getting this award for inspiring other women, and how can I inspire anyone if I'm hiding?"

And after a big deep breath, she continued: "On behalf of women everywhere, I will brag. I am the highest-paid showrunner in television."

Her speech was followed by a standing ovation from the crowd.

The medical drama ran for countless seasons, had millions of fans and continues to be a cult classic.

"I would say that I learned everything from Grey's Anatomy. I had never worked in television before. It amazes me that it is still on the air and it's still running and it's still a top show for the network and that fans are still responding to it," she shared.

"We have writers in our writers' room in Grey's Anatomy who grew up watching that show. That show will always be incredibly special to me because it taught me how to do this job." 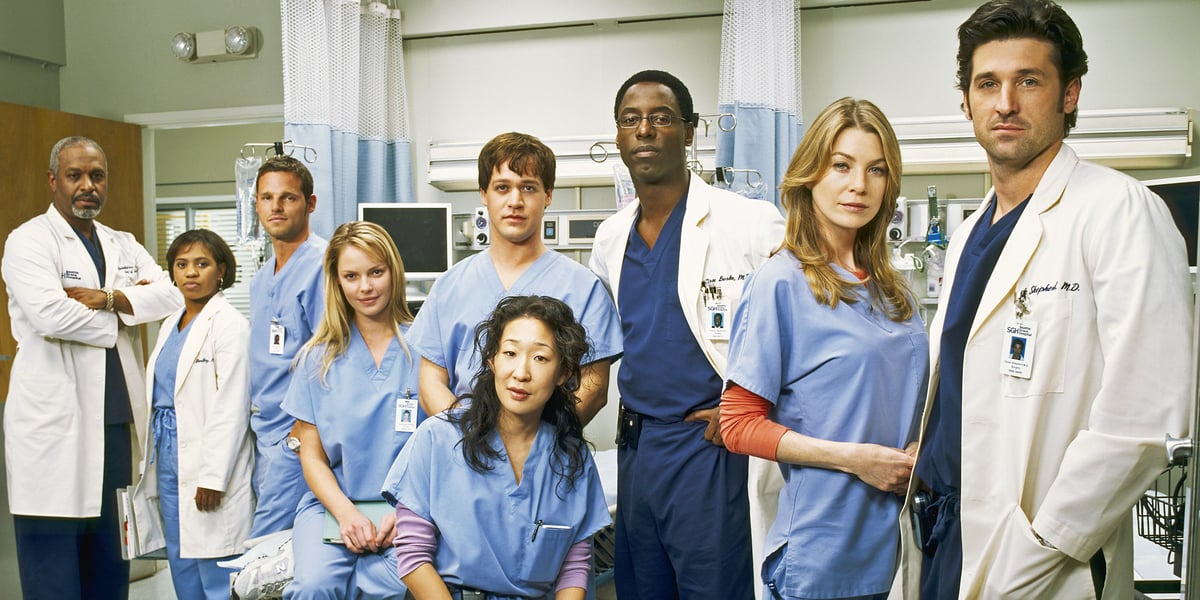 Season two of Bridgerton is on its way, and we have Rhimes to thank for all of it.

The series is of course based on Julia Quinn's historical romance novel series of the same name, and it's created by Scandal producer Chris Van Dusen and produced by Rhimes' production company Shondaland.

Of course in season one we said farewell to the Duke of Hastings, but Rhimes says the outcry over actor Regé-Jean Page leaving was exactly what she had hoped for.

"Everybody was so upset about Regé not coming back as the Duke, and I said early on our goal is that every season, you have a couple that you're obsessed with, and that you can't believe that we're not going to see more of their story next season, because we're telling a completely new love story every season," Rhimes noted to Ad Week.

"And that is the beauty of what season two is. We're halfway through editing all the episodes, and they're gorgeous."

And last but not least, we must unpack the sensation that is Netflix's Inventing Anna.

The production company behind Inventing Anna is of course Shondaland, and what drew Rhimes to the story was the compelling profile written by Jessica Pressler in New York Magazine in 2018.

"I was just excited about it from the very moment I read it. You could feel the cinema within it, and the characters and the idea of these women was something I couldn't get out of my mind. I always look for a story that I want to watch. That's the best barometer I have and Inventing Anna is something I knew we wanted to watch."

Some of the backlash that both Inventing Anna and Bridgerton have faced from critics is the suggestion they are not highbrow enough or a guilty pleasure.

But as Rhimes pointed out: "I think there is nothing guilty about pleasure. I always find that phrase slightly insulting because it suggests that you shouldn't be watching them.