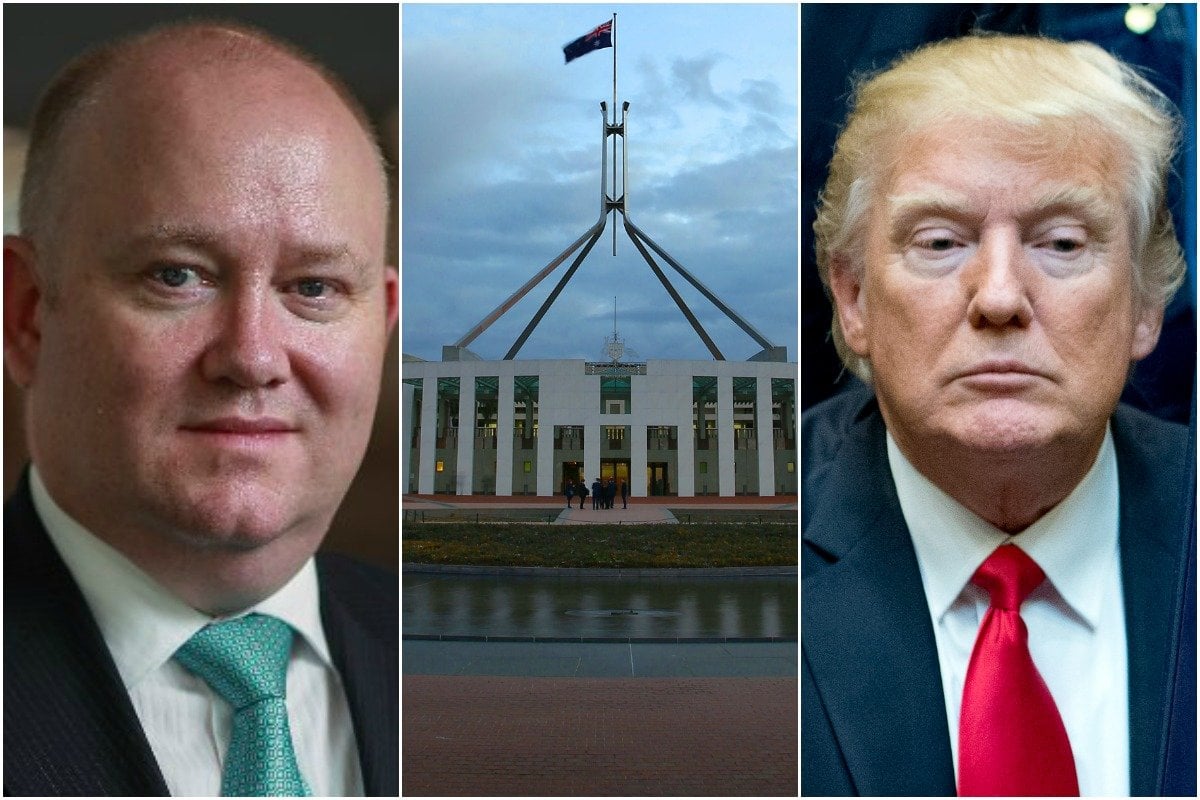 Donald Trump's campaign has given an update on their multiple lawsuits and investigations into 'voter fraud' declaring that the US election "is not over."

American news organisations including Fox News, who has been Trump's media organisation of choice for more than four years, cut away from the press conference as press secretary Kayleigh McEnany spoke.

Fox News anchor Neil Cavuto interrupted with "woah woah woah" telling his audience, "unless she has more details to back that up, I can't in good countenance continue showing you this."

"Unless she has more details to back that up, I can't in good countenance continue showing you this." pic.twitter.com/cBd6ASlV8H

Trump's camp say they are looking into 2800 'incident reports' of alleged fraud and "will continue to fight."

"We will not give up on this process….legal teams have been deployed in multiple states. If the shoe were on the other foot, the media would be screaming this race isn’t over. Because it’s Biden, the media demands the race is over," said Chair of the Republican National Committee, Ronna McDaniel.

A Four Corners investigation has revealed that two more MPS spruiking 'family values' and being stern defenders of traditional marriage were allegedly having affairs with staffers.

In 2018 Barnaby Joyces' affair with former staffer Vikki Campion made headlines, with Australia watching on as his wife Natalie Joyce and four daughters reacted to the news.

Now, the ABC reports Attorney-General Christian Porter and Acting Immigration Minister Alan Tudge were also having affairs around the same time, in 2017.

Both were married with children.

“It is vitally important that all politicians maintain the highest possible standard of proper conduct.” An explosive expose from @Milliganreports, Monday on #4Corners Here’s a preview pic.twitter.com/9x4K89iFoL

Both Porter and Tudge have portrayed themselves to their electorates as 'family men,' going against things like same-sex marriage because it would "weaken the institution."

Porter is considering legal action, claiming the ABC never approached him for comment, even though the journalist Louise Milligan says they gave the Attorney General two weeks to provide something to the program, which he refused to do.

President-elect Joe Biden will convene a coronavirus task force to examine the No. 1 problem confronting him when he takes office in January, while President Donald Trump pursues several long-shot gambits to hold on to his job.

Biden on Monday is to meet with an advisory board to examine how best to tame a pandemic that has killed more than 237,000 Americans.

"Dealing with the coronavirus pandemic is one of the most important battles our administration will face, and I will be informed by science and by experts," Biden said in a statement on Monday.

The group of scientists and experts will liaise with local and state officials on the pandemic response, including how to safely reopen schools and firms and tackle racial disparities.

I won't be president until January 20th, but my message today to everyone is this: wear a mask.

Biden cleared the threshold of 270 Electoral College votes needed to win the White House on Saturday, four days after the November 3 election. He beat Trump by more than 4 million votes nationwide, making Trump the first president since 1992 to lose re-election.

But Trump has not acknowledged defeat and has launched an array of lawsuits to press claims of election fraud for which he has produced no evidence. State officials say they are not aware of any significant irregularities.

Trump plans to hold rallies to build support for his challenge to the election results, campaign spokesman Tim Murtaugh said.

Trump has fired Defence Secretary Mark Esper – the first of several sackings that could come in the wake of his election defeat.

Trump announced the news in a tweet, saying Christopher Miller, the director of the National Counterterrorism Center, will serve as acting secretary "effective immediately".

I am pleased to announce that Christopher C. Miller, the highly respected Director of the National Counterterrorism Center (unanimously confirmed by the Senate), will be Acting Secretary of Defense, effective immediately..

“It makes no logical sense whatsoever to fire someone who’s highly qualified with literally weeks before you turn over this office,” retired general Barry McCaffrey told MSNBC.

Reports in recent weeks suggest he also wants to get rid of FBI Director Christopher Wray, Attorney General William Barr and CIA Director Gina Haspel before he is kicked out of office on January 20.

Former NSW fire commissioner Shane Fitzsimmons has been recognised as the state's Australian of the Year after guiding it through one of the worst bushfire seasons in history.

Mr Fitzsimmons led a statewide response, including a 74,000-strong crew of mostly volunteers, to the 2019/20 bushfires that devastated many parts of NSW before the COVID-19 pandemic.

READ: Shane Fitzsimmons is what a real leader looks like.

"Empowered every day I was by the tens of thousands of men and women dedicating themselves to responding to and assisting so many people in need during those fires," he said while accepting the award last night.

Australia's bushfire response is set to be bolstered this year with social media giant Facebook to provide local emergency alerts.

Approved state fire authorities will be able to send urgent notifications to people who follow their Facebook pages using the Local Alerts tool.

The tool, which also allows posts to be marked as alerts so they stand out in a user's news feed, will be extended to Australian fire services by the end of the year and to other eligible state and local government departments throughout 2021.

South Australian authorities are on high alert this morning bracing for the state's most dangerous bushfire conditions since last summer.

Reminder: Total Fire Bans have been declared for Tuesday 10 November 2020 in the following Fire Ban Districts:

Sydneysiders must book for NYE fireworks.

Anyone hoping to watch the New Year Eve's fireworks display in Sydney's CBD will need to book a spot at a venue.

Ticketed vantage spots will be for the exclusive use of frontline workers and firefighters, while businesses will be able to apply to open office space for functions, NSW Premier Gladys Berejiklian said on Monday.

"Unless you've been given a ticket to one of the designated areas or unless you have a booking at a restaurant or cafe, please do not expect to go to the city CBD," Ms Berejiklian told reporters.

"I myself spend New Year's Eve at home with my loved ones - everyone has their own way of doing it.

"We are encouraging people if they can afford it to consider spending New Year's Eve at a hospitality venue to support that industry."

NSW on Monday went a second day without recording a local coronavirus transmission but authorities still don't know how the virus made it to the Southern Highlands.

Seven cases - all in hotel quarantine - were recorded in the 24 hours to 8pm on Sunday, NSW Health said on Monday.

Victoria yesterday recorded a tenth straight day of no new coronavirus cases or deaths. There are now just four active cases in the state.

There are now zero healthcare worker infections in Victoria. To all Victoria’s healthcare workers, thank you for the sacrifices you have made to care for your communities – and each other – during the COVID-19 pandemic. pic.twitter.com/nqENxCkvg6

Victoria yesterday eased restrictions, with authorities cautiously optimistic the state would remain on track for even more restrictions to be eased on November 22.

Pfizer Inc says its experimental COVID-19 vaccine is more than 90 per cent effective, a major victory in the fight against a pandemic that has killed more than a million people, battered the world's economy and upended daily life.

Pfizer and German partner BioNTech SE are the first drug makers to release successful data from a large-scale clinical trial of a coronavirus vaccine.

Pfizer plans to have more than 1 billion doses of its coronavirus vaccine available globally next year, the drugmaker’s CEO says. If approved, the vaccine will be available free to all American citizens. https://t.co/gup0eNOeay

The companies said they have so far found no serious safety concerns and expect to seek US authorisation this month for emergency use of the vaccine.

Health experts said Pfizer's results were positive for all COVID-19 vaccines currently in development since they show the shots are going after the right target and are a proof of concept that the disease can be halted with vaccination.

- World stocks have hit a record high with the announcement of a Biden presidency.

- Ukraine's president has tested positive for coronavirus "despite all quarantine measures."

- Concerns are growing that an outright civil war could break out in Ethiopia.

- A two million year old skull from a large toothed distant human cousin has been unearthed in a South African cave system.