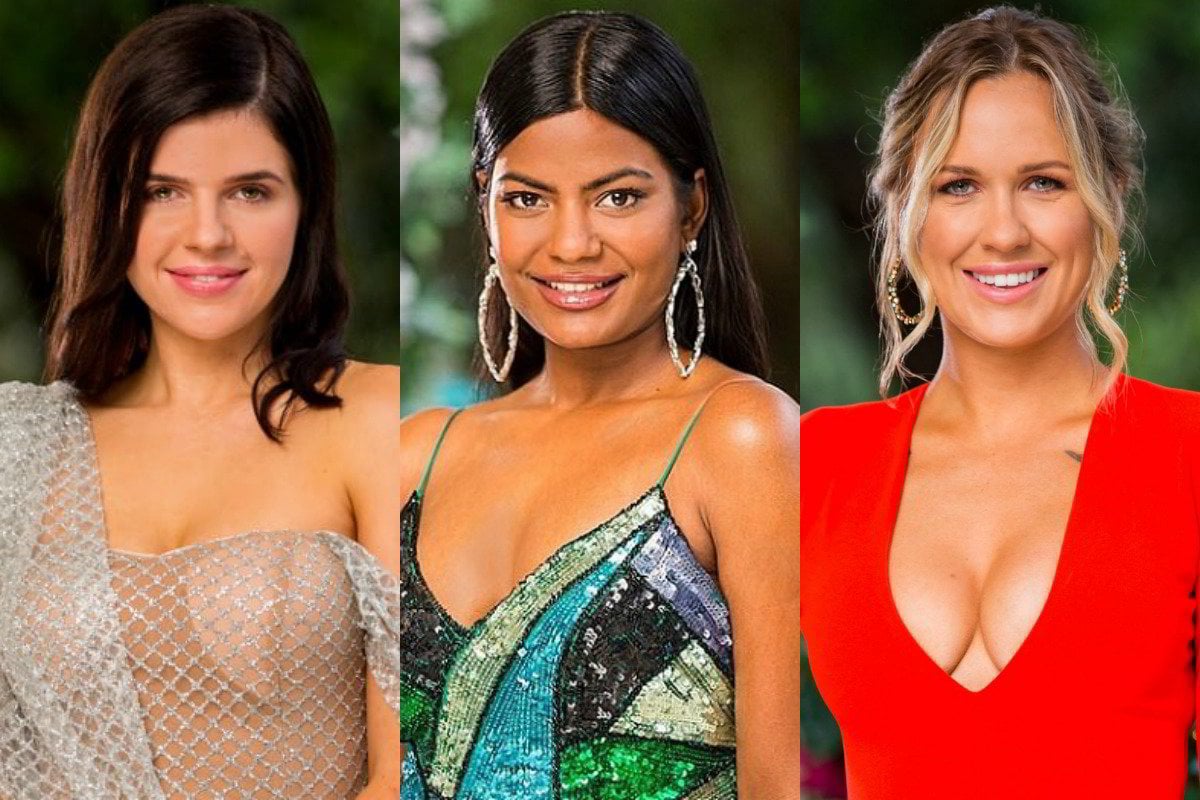 This season of The Bachelor started out just like the seven seasons before it.

In the first episode we met our Bachelor, Locky Gilbert, and the 23 women who were hoping to be standing beside him when the final credits roll.

We placed bets on which wifey would win, and which wifey would be blindsided during the finale. We good-naturedly laughed along with the kooks, as they arrived in penguin suits and stumbled through their introductions.

We even laughed along when Zoe-Clare, fuelled by alcohol and deep-seated insecurities, had an epic meltdown at the first cocktail party and accused people of discriminating against her hair colour.

A few episodes in, it became clear that Roxi, Laura and Areeba were the 'villains' and would be the focus of much of this season's drama.

25-year-old Areeba was full of confidence, referred to herself as "the boss" and wasn't afraid to stir the pot. Laura, 24, had appointed herself as the season's commentator and had zero patience for everyone and everything. 29-year-old Roxi was hotheaded and would fly off the handle the moment she felt threatened.

They were the perfect combination of pot-stirrers to create a season full of group date drama and cocktail party showdowns.

During the first cocktail party, the three women firmly claimed their place as the villains, making comments about the other women in the house and attempting to stir the pot.

At the second cocktail party, Areeba and Kristina confronted their friend Juliette after she slipped Locky a note. They had a heated confrontation which climaxed with Areeba storming out of the cocktail party claiming she didn't want to be Juliette's friend anymore.  ﻿

By the third cocktail party, there was a firm shift in the house.

Areeba, Kristina and Juliette had made up, and the contestants seemed to have formed two distinct groups. Areeba, Juliette, Kristina and intruder Kaitlyn made up one group, while the rest of the women appeared to have banded together to form the second group.

Led by Roxi, the larger group became convinced the smaller group were "planning something" and were attempting to undermine their chances with Locky.

The larger group gathered together in one part of the backyard and b*tched about the smaller group. Roxi claimed Juliette was telling Locky lies about her. Laura said Areeba and her "little friends" were up to something. Other members of the group made passing comments about Areeba and her friends. Zoe-Clare chanted "keep us away from the psychos".

Listen to Mamamia's daily entertainment podcast, The Spill. In this episode, we discuss the ugly side of The Bachelor. Post continues below.

Noticing the other women were talking about them, Kaitlyn, Areeba, Kristina and Juliette pretended they were having a great time. This further spurred on the other women and Laura confronted Juliette and Kaitlyn about what they were "planning". She later claimed talking to Juliette was like being on an "international phone call".

At the next group date, the women in the larger group worked together to kick Areeba out of the chess game.

Then at the next cocktail party, Roxi called Kaitlyn "Gold Coast trash" and made derogatory comments about her such as "b*tch is a sl*t" and "ya fake hair, ya fake lips, ya fake boobs", after she kissed Locky.

While this was going on the other women in the mansion were telling Kaitlyn, Areeba and their friends to settle down and stop causing a scene. No one stood up for Kaitlyn. No one stood up to Roxi.

This pattern continued throughout the rest of the cocktail parties. Laura would make derogatory comments about the other women. Roxi would storm off and accuse them of being out to get her. Meanwhile, the rest of the women in the house would accuse Areeba and her group of causing all the drama.

The reaction on social media mirrored what was happening in the house. People laughed at Laura's commentary and Roxi's meltdowns. Meanwhile, they called Areeba "horrible" and suggested she should never have been allowed on the show in the first place.

On Wednesday night, Areeba and Laura were both sent home. They had very different post-show experiences.

On social media, people said they would miss Laura's commentary, while others said they were happy to see Areeba go. In interviews, Areeba was forced to own her behaviour in the mansion, while Laura answered the stock-standard questions.

Areeba doesn't know why she was treated so differently to the other women in the mansion, but it's something she's been thinking about a lot while she's been watching it all play out on TV and on social media.

"I would love to know why I was such a bad person, I became such a bad person, for saying what everyone else was thinking and saying things like 'I just want to stir the pot'," she told Mamamia after her eviction on Wednesday night.

Why did the other women in the house seemingly embrace and defend Roxi and Laura, but quickly ostracise Areeba? Why was the larger group of women so intimidated by the smaller group?

﻿Why do some people get a stronger reaction on social media while others get a free pass? Is it just the power of reality TV editing or is there something deeper going on here that we need to examine further?

We don't know exactly what went on behind-the-scenes in the mansion. We don't know how the show was edited - how much of what we saw was manipulated, and how much was missing.

We can't claim to know why three women went into the house with the same intentions and had very different experiences.

But it is something we need to question.

The Bachelor continues on Wednesday at 7:30pm on Channel Ten.

Reply
Upvote
3 upvotes
"But it is something we need to question."
Broadly speaking, the whole concept of this rubbish TV should be questioned. It's weird to pick apart these shows when there is absolutely no redeeming feature to be had in them. The whole franchise is awful, is hardly "empowering" to anyone, and pretty much drags down the collective IQ of anyone involved or watching. So why even bother trying to analyse this show? It's a lost cause, with no ambition or claim to be anything but trash. The real question is: if you are watching - why??
R
rush 2 years ago