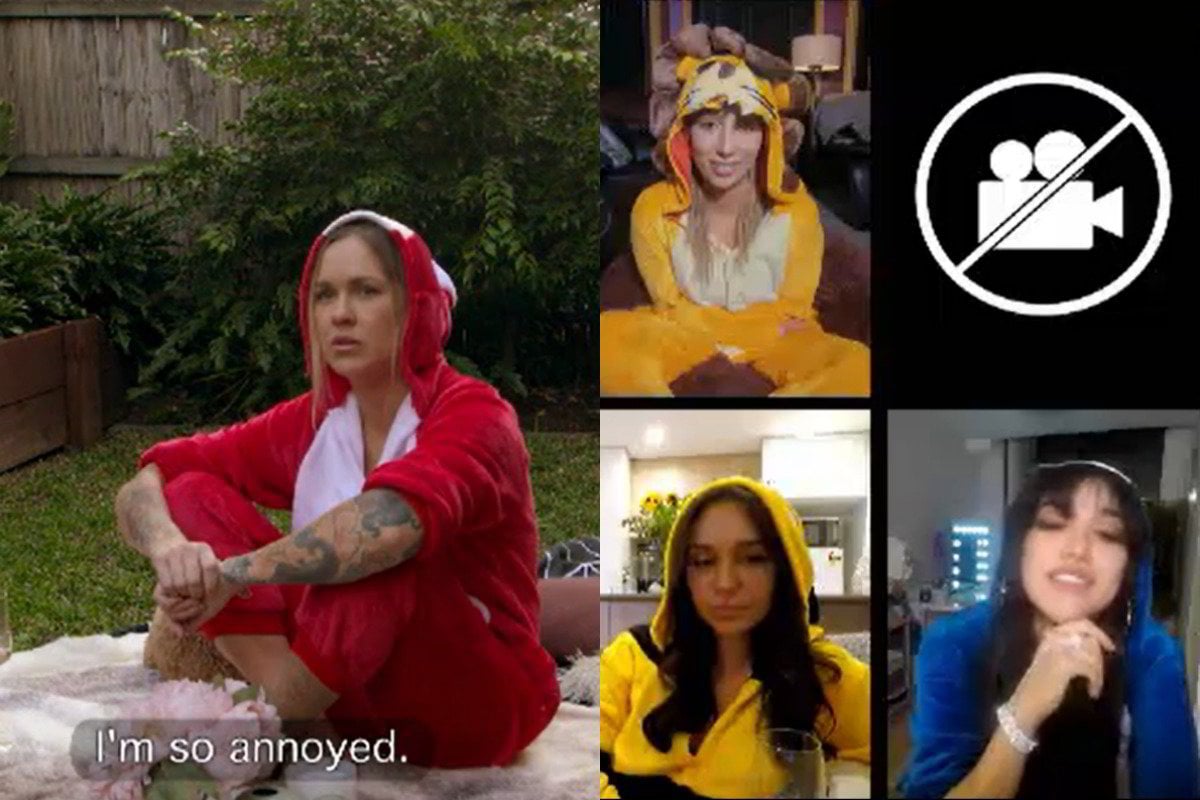 If it isn't time for a bunch of unnecessary bath dates.

We open on Locky having a pool think. 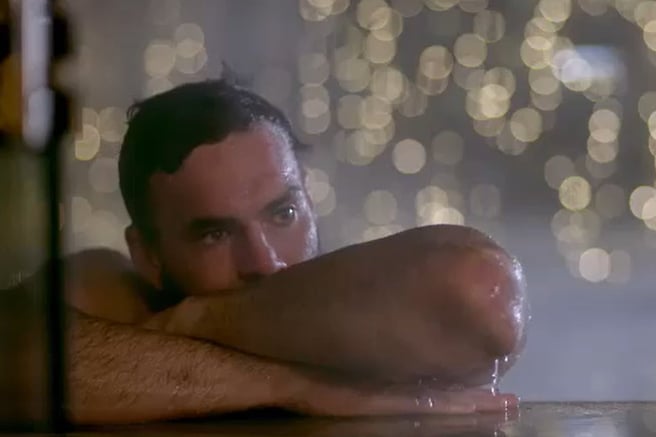 Sometimes a global pandemic sends your 10 girlfriends home and that's hard for you.

It's been weeks since his last saw his 10 girlfriends and he has no idea who's been calling who a b*tch etc etc.

Osher is now on a laptop and he's telling the women they've found a solution to this whole lockdown thing... it's called video sex.

He starts a Zoom call with all his blonde friends and tells them that everything - the dates, the cocktail parties, and the rose ceremonies - will be done over Zoom during the plague. 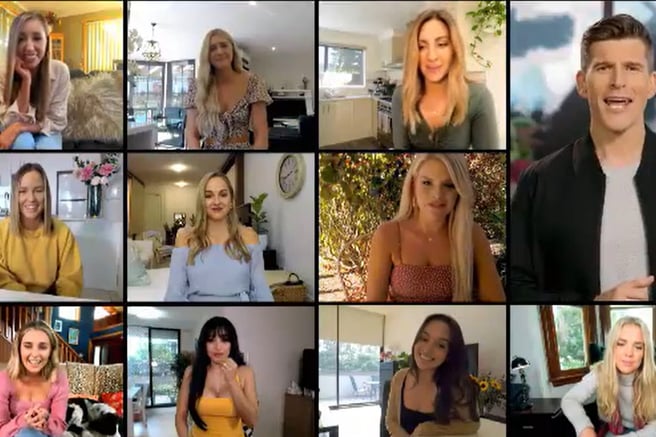 "You might still get those teeth whitening endorsements, ladies."

Locky joins the Zoom call and choses Izzy for the first lockdown date because she made his time "shine" during lockdown.

A picnic basket arrives at Izzy's door and they make tacos over Zoom. They don't seem to eat any of the tacos which seems like a huge waste of Old El Paso, but ok. 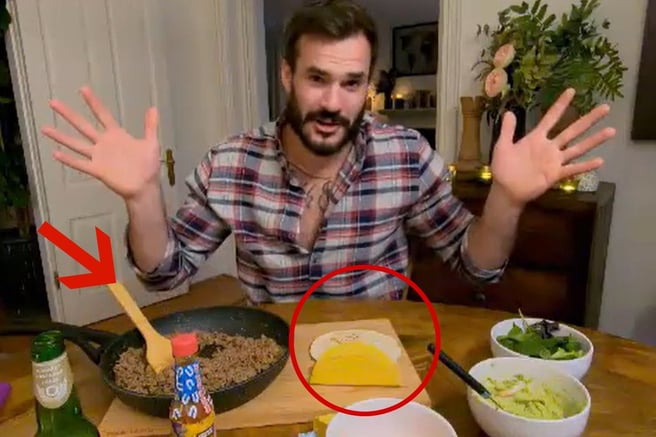 SIR. Osher bought those taco kits 2 for $8 at Coles and it would be rude not to eat them.

Meanwhile, the rest of the women are talking about Izzy over another Zoom call.

They discover some of the women had been talking to Locky over Zoom and phone calls during lockdown while some... hadn't.

Locky and Izzy are now in their separate bath tubs and Locky is wearing goggles and a cap because that's funny to him. ¯\_(ツ)_/¯ 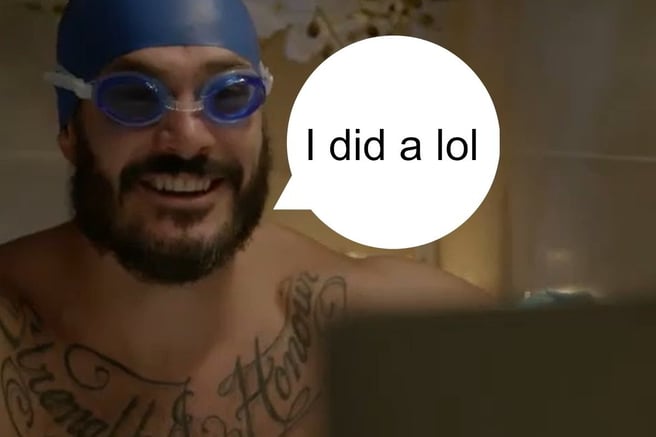 Izzy gets a rose for laughing at Locky's lame jokes and that's sweet I guess.

It's group date time and they're all wearing... onesies.

Locky explains that they're going to play a game where they can literally ask each other anonymous questions and this is not going to end... well.

Someone asks Locky if Bella is his favourite and he says... no. Then someone asks Bella whether she's on the show for love or her social media presence.

Bella thanks the women for "stitching her up" and calmly responds that she already has a social media presence because that's how they found her for the show etc etc.

Someone asks Roxi why she's constantly crying and storming off and she's definitely going to cry and storm off later.

Next, someone asks Juliette whether she's really been celibate for the past 12 years.

She explains that she had sex with her boyfriend when she was 22 and hasn't had sex since because she's been pursuing God (not on a reality TV show; I presume).

Someone asks Roxi why she has a secret boyfriend and here comes the STORM OFF.

She starts yelling about how she came on the f*cken show because she couldn't f*cken meet anyone so how could she have a secret f*cken boyfriend.

And then she... leaves the Zoom meeting. 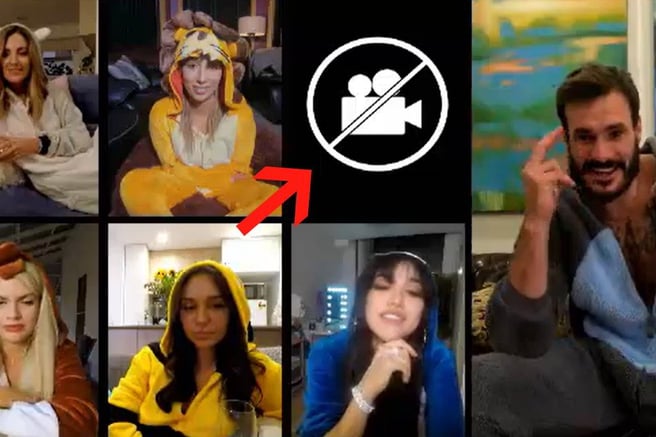 Osher comes back and everyone discusses how Roxi did a Zoom storm off while she cries in her backyard and her dog is embarrassed for her. 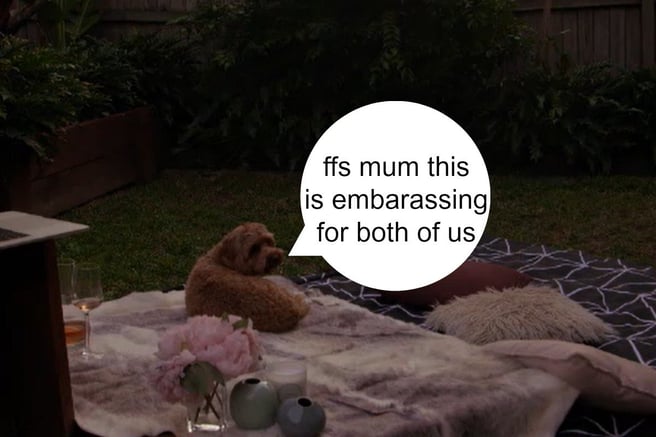 "I didn't even want to be on this stupid show, everyone else is at the dog park."

It's cocktail party time and Roxi has decided she's going to "fly under the radar".

Locky grabs Roxi for a chat to ask her about that time she stormed off from the group date and embarrassed her dog.

Irena interrupts their chat and Roxi goes back to fight the rest of the women to the death.

﻿They continue to fight until the rest of the women just low key leave the Zoom call. 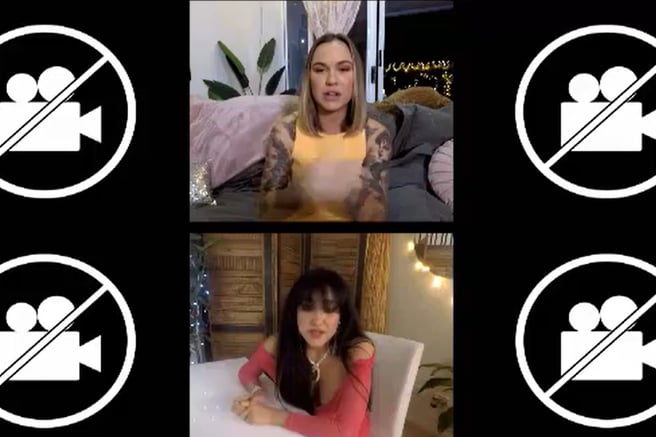 Osher has to speak louder than a whisper for once because everyone is dialling in.

Irena gets a rose.

Steph gets a rose.

Bella gets a rose.

Roxi gets a rose... and doesn't storm off.

Juliette gets a rose.

Bel does not receive a rose despite NURSING WARTIME LOCKY BACK TO HEALTH IN A PREVIOUS LIFE.