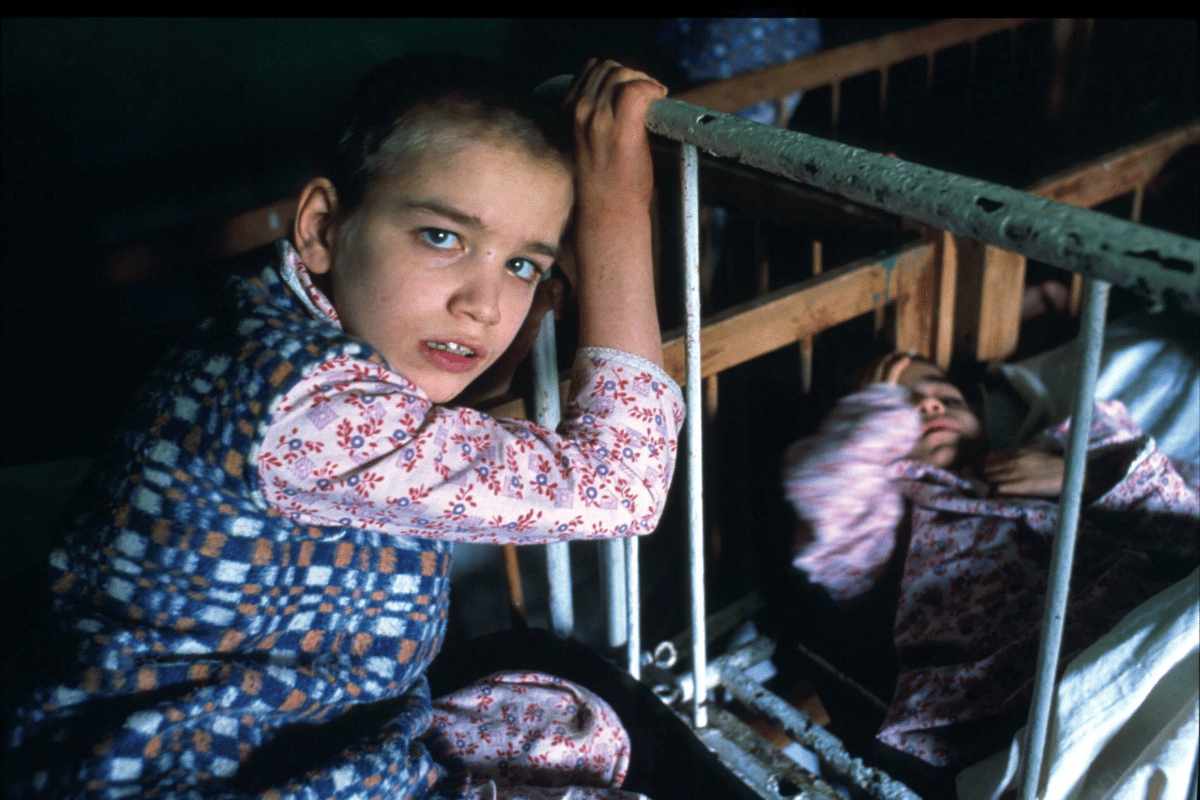 In January 1990, British journalist, Bob Graham, was among a wave of foreign reporters to duck beneath Europe's lifting Iron Curtain.

He was in Romania, two weeks after the assassination of the country's communist dictator, when he came upon one of the newly felled regime's darkest legacies: a state-run orphanage.

There are two things about that visit that will never leave him: the smell — rank, acrid, urine — and the silence.

"Usually when you enter a room packed with cots filled with children, the expectation is of noise, chatter or crying, sometimes even a whimper. There was none, even though the children were awake," he told GlobalPost. "They lay in their cots, sometimes two to each cot, sometime three, their eyes staring. Silently. It was eerie, almost sinister."

Staff seemed to ignore them. There was no play, no comfort, no books, toys or paintings in the room.

"[There were] stalls where children, babies, were treated like farm animals," he continued. "No, I am wrong — at least the animals felt brave enough to make a noise."

﻿﻿The children Graham saw that day were just some of the more than 100,000 languishing in institutions across the country.

Years later, this forgotten generation would help shape the way scientists understand what happens when a child is raised without a caregiver, when they are starved of attention, affection and love.

The birth of a doomed generation.

These hellish institutions were run with state money, the product of pro-family policies imposed by communist dictator Nicolae Ceaușescu, who came to power in 1965.

Labouring under the Stalinist idea that boosting the population would boost the economy, Ceaușescu issued a series of bizarre decrees to encourage procreation.

He banned abortion for women with fewer than four children, lowered the legal marriage age to 15, instituted a ‘childlessness tax’, and provided financial incentives for working mothers. The contraceptive pill and condoms were also forbidden, and from 1985, women were subjected to regular gynaecological exams at work to check for pregnancy.

﻿﻿"The foetus is the property of the entire society," Ceaușescu said, announcing his abortion decree. "Anyone who avoids having children is a deserter who abandons the laws of national continuity."

As tens of thousands of poverty-stricken Romanians struggled to look after their swelling families, the regime erected dozens of 'children's houses' and embarked on a campaign to present them as a viable alternative to the traditional family. The message delivered to parents was simple: the state can take better care of your child than you can.

It's estimated that roughly half a million children were relinquished during the Ceaușescu regime's 24-year reign.

Those younger than three were put in Health Ministry nurseries. From there, they were 'sorted' based on their ability to successfully contribute to society and the workforce later in life — a process in line with the Soviet 'science of defectology'.

Healthy children went to orphanages until they were six and were then sent to facilities run by the Education Ministry, where they received some schooling. But those with disabilities, illness, or physical differences, were dispatched to separate facilities: Homes for the Deficient and Unsalvageable. 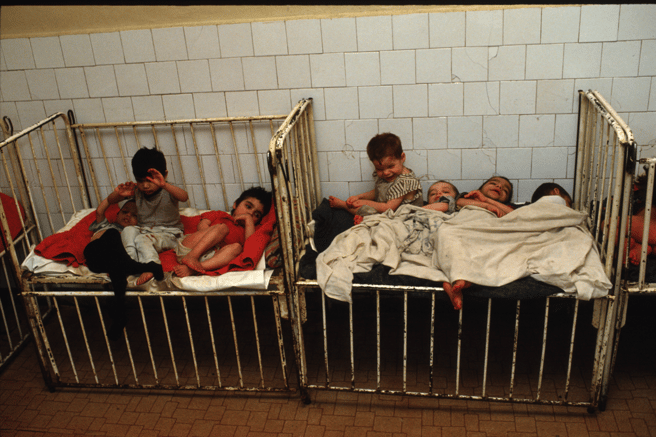 Izidor Ruckel, who had a leg deformity due to polio, was among them.

﻿﻿ ﻿"There was so many of us," he told the ABC. "We’d have breakfast and then we were put into a clean room and all we did was rock back and forth. Some cried and some hit themselves. Some were put into straightjackets to prevent them from doing that. After lunch [it was the] same thing..."

Inside Romania's 'slaughterhouses of the soul'.

After Ceaușescu's regime was toppled in Romania's 1989 revolution, media exposed the conditions in the children's homes to the world.

These places were referred to by many names: child gulags, hellholes, 'slaughterhouses of the soul'.

Images and reports told of malnourished children crowded into cold dark dormitories, some tethered to rusting metal cots or even confined in cages. Often, there was just a member of staff for more than a dozen children, meaning babies were left laying on their backs for hours without any touch or stimulation.

Many of the children were violent or several developmentally delayed, some spoke gibberish. They survived largely on meals of boiled cabbage and meagre portions of bread and cheese. 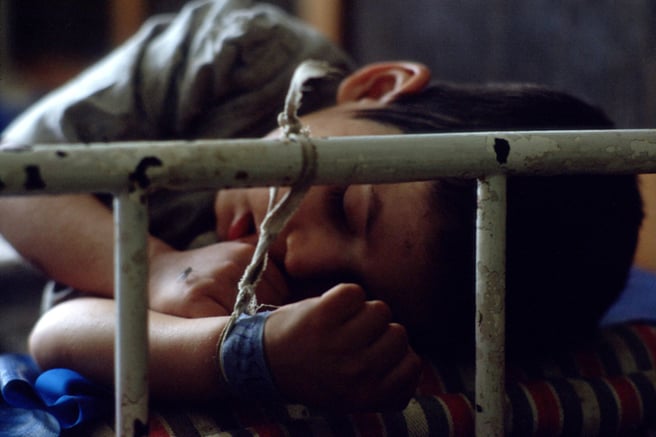 A child tethered to his bed in a Romanian orphanage. Image: Getty.

The stunning reports saw donations of food, powdered milk, toys and money flood in from around the world. Meanwhile, foreign researchers expressed their concern about the impact of the emotional neglect endured by the children.

Charles A. Nelson III, a professor of pediatrics and neuroscience at Harvard Medical School and Boston Children’s Hospital, told The Atlantic about his visit to one Bucharest facility in the '90s. A little boy stood crying in his cot.

"He was heartbroken and had wet his pants. I asked, 'What’s going on with that child?' A worker said, 'Well, his mother abandoned him this morning and he’s been like that all day.' That was it. No one comforted the little boy or picked him up."

Nelson was one of the leaders of The Bucharest Early Intervention Project, a landmark research endeavour launched in 2000 that explored the effects of early institutionalisation on children.

The American team, led by scientists from the University of Maryland and Tulane University, studied 136 Romanian children, aged between six and 31 months, who had been in orphanages since birth. Half remained there, while the other half were dispatched to foster families that had been recruited and trained by the researchers.

They also evaluated a control group of Romanian children who had never lived in an institution.

The children underwent several assessments through to age 16. And the results showed just how critical the early presence of a parental figure is to the development of a child.

Those who remained in the institutions experienced profound problems: delays in cognitive function, motor development and language and deficits in socio-emotional behaviours. They also experienced more psychiatric disorders. 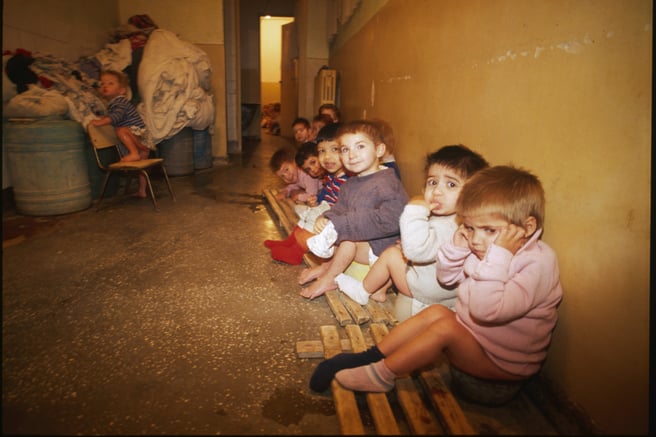 One of the standout findings among this group was that, as infants, 13 per cent displayed no attachment behaviours to adult caregivers. “These children had no idea that an adult could make them feel better," leading researcher Charles H. Zeanah told The Atlantic. “Imagine how that must feel — to be miserable and not even know that another human being could help.”

The picture was much brighter, though, for those children who had been moved to high-quality foster care.

The American Psychological Association explains: "These children showed improvements in language, IQ and social-emotional functioning. They were able to form secure attachment relationships with their caregivers and made dramatic gains in their ability to express emotions."

Those who were removed from institutions before the age of two made the most significant improvements.

"There's a bit of plasticity in the system," one of the researchers told APA. But to reverse the effects of neglect, he added, "the earlier, the better".

The fate of Romania's orphans.

Once the world learned their stories, thousands of Romanian children were adopted by foreign families, from the US to the UK, in the late '90s and early 2000s. Although, media has since reported the struggles of many to cope with the additional needs caused by their early neglect.

Of those who simply aged out of the Romanian care system, many ended up on the streets with little education or skills to support themselves.

While the child protection system has made significant improvements over the past two decades (it was one of the conditions for the country's acceptance to the EU in 2007), large care homes remain and NGOs remain on the ground advocating for further reform and helping the forgotten generation transition to adulthood.

Izidor Ruckel, the polio survivor, has joined the advocacy effort. He was among those adopted by an American family, and while he had significant struggles (behavioural, relational among them), he's said that he's learned through his adoptive parents what love, compassion and affection can do.

"There are things that I’m left scarred with," he told the ABC. "I’m not the brightest person, but I do the best of my ability to move forward and I try not to give up on life. I believe people can overgrow some mentalities. Anything is possible."

Reply
Upvote
My aunt and her husband adopted a 9 month-old Romanian boy in 2000. He was raised an only child, with fancy holidays, soccer classes, any activity he was interested in and loads of love and patience. He went to see a psychologist early on so that they could help with any trauma. However, in high school, he started bullying other kids, stealing in shops and ended up being expelled from 2 schools before he decided to drop out at 16. He even went so far as to threaten my aunt that he would kill her whenever she tried to show any kind of authority. He then went to court to ask to be placed in a different family. He is now 20 and doesn't work, he lives in an apartment that's paid for by the government, struggles to be in any social situation. He had a girlfriend for a while who he was violent with. He still speaks to my aunt every few months and goes from telling her he loves her to 'I never want to see you again'. My aunt is currently divorcing, both her and her husband have felt that they failed. I'm not sure this is true for all of these kids but no amount of love could fix him.
birdie 5 months ago

Reply
Upvote
I have a friend who tells a very similar story, with a daughter. Every possible thing was done for her, including boarding school at one of the most prestigious girl’s’ schools in NSW. She wanted to go there and so she went. She was expelled after several incidents. She disappeared at the age of 16 and didn’t make contact again until she called home asking her parents to organise a lavish wedding. In another state. They complied. She’s now in her early 30s has been married twice and has a preschool son, whose father she’s unsure of. It’s tragic but my friend and her husband are still happily married.
cat 5 months ago

Reply
Upvote
1 upvotes
@mamamia-user-866993868 love and money dont negate trauma. But these children aren’t ‘broken’, and no one needs to be ‘fixed’. They may need help, but the idea that people are problems or can be ‘beyond repair’ is ableist and unhelpful.
gu3st 5 months ago